Dan “Blitz” Bilzerian is possibly the best known social media celebrity. Bilzerian, called “The King of Instagram” by his followers, uses sites like Facebook, Twitter and Instagram to document his extraordinary lifestyle. Whether it’s shooting guns in a desert, driving custom-made vehicles, flying to Vegas because why not, or being surrounded by (half) naked models, Bilzerian has done it all. And he made sure that the whole world sees it.

But how did he get to this point? How can he afford such a luxurious lifestyle? What’s the origin of his wealth?

Let’s dig in, and find out exactly how rich Dan Bilzerian is, and how did he become so wealthy.

How Did Dan Bilzerian Get So Rich?

Dan Brandon Bilzerian was born December 7, 1980 in Tampa, Florida. As a child, he lived in a huge mansion with his father Paul, his mother Terri and his brother, Adam. His father owned a robotics company and some other investments, that he was busy with most of the time, neglecting his family. When Dan was 10 years old, his father went to prison. He was charged with 9 counts on fraud, most tax and stock related.

After his father was imprisoned, Bilzerian was expelled from two schools within a single year. Later on, Blitz went to school and brought his dad’s machine gun with him. Long story short, Dan was asked to leave the state of Utah, and never come back. 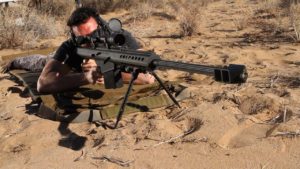 He decided to join the Navy SEALs, but after his second graduation attempt, he dropped out. After that, his gambling career and rise to fame, started.

His early attempts didn’t go as planned, and he went broke in a year. Dan was forced to sell his loved guns, and returned to poker tables, this time playing with more self-control. After making $10,000, he flew to Vegas, where he turned 10 grand into nearly $200,000.

Encouraged by his success, he went back to university to study, but also kept playing poker cash games ( no stake limit games). He claims that he made up to $90,000 a week, and that was the reason he dropped out, and devoted himself to poker. 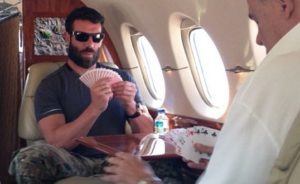 He was 27 years old when he first entered the high-stake tournaments. He ended up winning $36,000 and finishing in 180th place, severely disappointed (mostly because the winner got $8.5 million).

However, Dan Bilzerian was charismatic and interesting, so he got plenty of screen time. The results of that were his first public stunts, and the beginning of his reckless lifestyle. He started betting big and often, and entered the so-called “nosebleed” games.

Nosebleed games are the highest stake poker games, with millions worth of chips being played. Bilzerian was playing such games against superstars like Mark Wahlberg and Tobey Maguire.

Dan doesn’t consider himself among the world’s best poker players. He has simply stated that he can get to some of the most lucrative games that are being played, and that he can pick them well.

He started winning millions of dollars at poker tournaments and enjoying his fame. 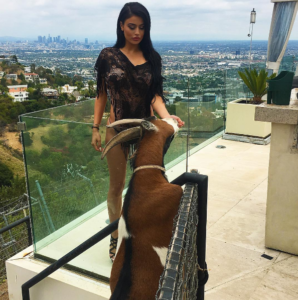 At the same time, his big wins motivated him to start publishing his everyday life on social media outlets. He quickly amassed many followers, got sponsorship deals and started not giving a damn about anything else except his lifestyle.

Most of Bilzerian’s wealth come from gambling, mainly poker. But he also made money by acting, getting sponsorship deals and selling merchandise with his name on it.

To answer this question, I will quote something that Dan wrote on his Instagram.

If you are thinking about getting married, just remember, one vagina for the rest of your life… Not smart. 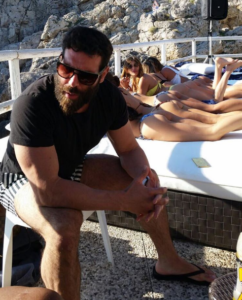 So there’s the answer.

However, he was in a relationship with a Playbol model, Jessa Hinton, but that didn’t last long. She took notice of newspaper articles that wrote about Bilzerian’s private poker games, that, allegedly,  often included prostitutes and drugs.

Bilzerian however enjoys the company of young supermodels, and isn’t ashamed of it. His Instagram feed is filled with images similar to the one on the right.

Where Does Dan Bilzerian Live – Picture of Bilzerian’s Houses 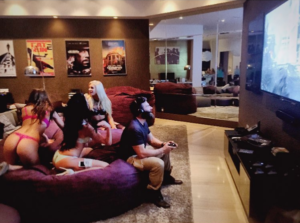 Dan Bilzerian lives in the Hollywood Hills, where his neighbours are people like Leonardo DiCaprio. The house has a 270-degree view over the city, a big pool, poker tables, and a big garage for his vehicles.

He lives with 2 goats and a cat, all of which sleep outside on a $700 blanket.

He often hosts parties and makes sure to publish them on social media. 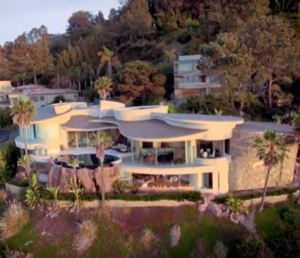 Dan Bilzerian also has houses in Los Angeles and La Jolla, San Diego. All of them very luxurious, obviously, to suit his lifestyle.

Other than that, he frequently rents out expensive condos and houses while travelling. 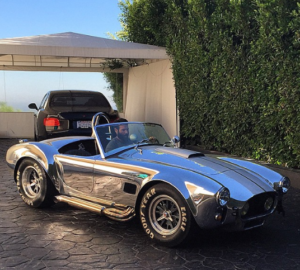 As mentioned above, Dan has a big garage to store all of his vehicles. Right now, he has several very expensive cars, ranging from sports cars to a custom-made Brabus truck.

He owns a chroma-plated 1965 Shelby Cobra with a vanity plate that spells out “SUCK IT”. Speaking of vanity plates, his Lamborghini Aventador spells out “MR GOAT”, which is a tribute to his pet goat, Zeus. 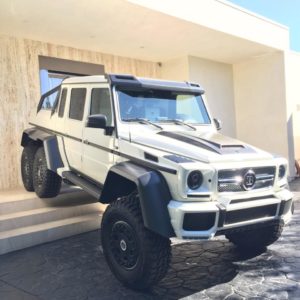 Bilzerian has recently ordered a custom-made Brabus G63 AMG 6×6 truck that he enjoys showing off on Instagram. A similar vehicle can be purchased directly from Brabus. Price? Roughly $760,000.

Bilzerian has also bought a Polaris RZR 900, an offroad vehicle, on which he plants to mount a custom machine gun. Dan sure knows how to combine his favorite things in the world – excessive amounts of money, cars and guns.

He also enjoys renting out Ferraris and other sports cars from time to time, and was given a Bentley as a Christmas gift, by his father.

Dan Bilzerian doesn’t have a fixed salary, or income, for that matter. He makes his money by winning huge poker pots, and then proceeds to spent it partying.

In 2013 for example, Bilzerian won close to $11 million dollars playing poker in a single night. He took the opportunity to brag about his wining on Instagram, and then flew to Mexico in order to “relax”, as he said it.

So in roughly year and a half, Bilzerian has increased his wealth by $50,000,000 which is really saying something about his income. 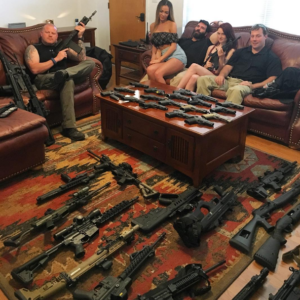 He has suffered 3 heart attacks by the time he was 32, due his reckless lifestyle.

Bilzerian turned down a $100,000 offer (by an unnamed Facebook funder) to shave his beard.

Apparently,  Bilzerian’s home is filled with loaded guns, and anyone entering is frisked and warned about the guns by Dan’s security guards.

Even when doing charity work, Bilzerian does it in his own style. Last year, he has rented out his Hollywood Hills mansion to Steve Aoki’s Charitable Fund. Together, the famous DJ and Bilzerian hosted a poker tournament and a celebrity party, all in one. 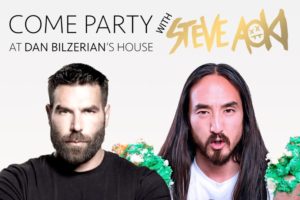 Fans from all over the world were invited to the event, but only some of them were lucky enough to be chosen. After a night of playing poker and partying, the winner won many prizes, including a ticket to the famous Merryweather vs. Pacquiao fight.

Up to $100,000 was raised for charity during the huge party. Steve Aoki has promised to host more such events in the future.

Recently, Bilzerian has gotten a bit quieter than his usual self, and increased his charity donations.

What’s next for the social media playboy? More partying, poker and luxurious purchases? Or will he attempt to calm down? No one knows, but I’m sure we’ll find out soon enough, because Dan’s life is never private.

Jan 13, 2022
I don’t do subscriptions (Netflix doesn’t count), so when a friend first recommended Nuuly to me, I turned the idea down so fast, she...