What Happened to Regis Philbin – 2018 Updates 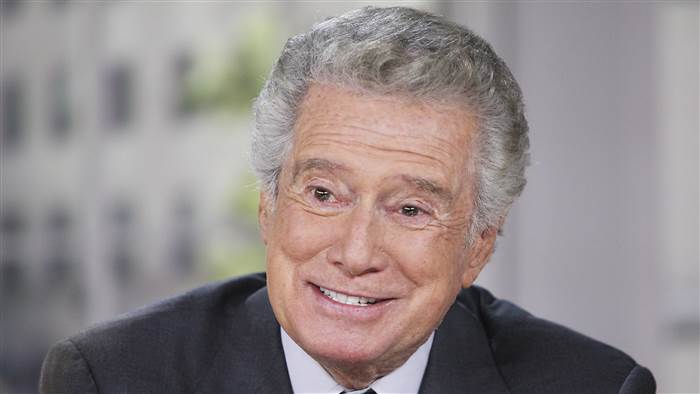 Regis Philbin was one of the biggest television stars of the 1990s and 2000s, and his name was powerful enough to draw attention to anything he did. Since he left “Live!” In 2011, though, he hasn’t been nearly as visible. What is Regis Philbin up to these days? 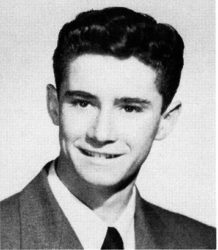 Regis Philbin’s has had a long and impressive career. Born in 1931 in the Bronx, Regis grew up as an only child; his brother would be born when he was 20 years old. He attended Notre Dame and eventually graduated with a sociology degree, giving no hints as to the showbiz icon he was to become. After school, he entered the Navy, but shortly thereafter he began his ascent through the lower rungs of the television industry.

Philbin worked as a page at “The Tonight Show” and worked as a writer before landing his first headlining gig, hosting “The Regis Philbin Show,” a local San Diego broadcast. Later he would replace Steve Allen after he left “The Steve Allen Show.” While a great opportunity for Philbin, it was short-lived, as Allen’s audience didn’t take to Philbin’s very different personality. That, combined with sharing a time slot with “The Johnny Carson Show,” caused it to be cancelled after only three months.

Despite that early letdown, Philbin continued to climb the ladder. He joined “The Joey Bishop Show” as Bishop’s sidekick until that show went off the air in 1969.

In 1975, he became the co-host of “A.M. Los Angeles,” a Los Angeles-based morning talk show. The show was struggling before he came on, but due to his talent and charisma it surged to the number one position in its time slot. His co-host, Cyndy Garvey, left the show in 1981 and moved to New York, where Philbin would rejoin her in 1982 on “The Morning Show.”

“The Morning Show” would catapult the already-popular Philbin to super stardom. Garvey eventually left the again, and after some time, she was replaced by Kathy Lee Johnson in 1985. Johnson would later become Kathy Lee Gifford, and “The Morning Show” would eventually become “Live! With Regis And Kathy Lee.” The show was a huge success, and by 1988 it went into full nationwide syndication. Philbin would eventually be awarded seven Daytime Emmy awards for his work on the show.

Philbin and Gifford worked together until 2001, when Kathy Lee left the show. She was replaced by Kelly Ripa, a younger, much different type of host, but she and Regis quickly built a chemistry and kept the successful show rolling for another ten years. The show was renamed “Live! With Regis and Kelly,” and would remain that way until Regis’s departure in 2011.

While Philbin was best known for his talk hosting, in 1999, he stumbled into a phenomenon. Philbin was hired to host the American adaptation of British game show “Who Wants to Be A Millionaire?” Originally intended to be an occasional special event, it was a huge success, setting viewership records for a prime-time game show. Its wild popularity spurned ABC into making it a regular feature, and its popularity only served to make Philbin an even bigger star.

By 2002, the show’s popularity had dwindled, and it was canceled. It was brought back in 2004 in syndication, and while Philbin would no longer be the full-time host, he did serve as a guest host several times over the years.

Philbin has appeared in motion pictures, but the small screen is his true bread-and-butter–so much so that he actually holds the Guinness world record for time spent on camera. 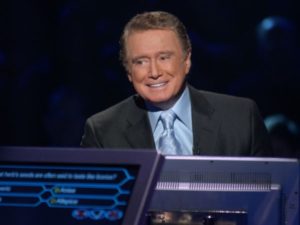 While you can’t find Regis on the set of “Live!” every weekday anymore, he’s not too hard to find. Philbin has kept himself busy over the last several years even without a primary gig for most of that time.

A longtime sports fanatic, Philbin was brought on to host a Fox Sports series called “Crowd Goes Wild” in 2013. The show was to offer a unique, humorous outlook on the daily ins-and-outs of sports. Unfortunately, the show’s success never matched its ambition, and it was cancelled before the end of its first year.

Throughout his career, he has been a substitute host for many shows, and that has continued that role post-”Live!” He has substituted for Jon Stewart on “The Daily Show,” Piers Morgan on “Piers Morgan Tonight,” and James Corden on “The Late Late Show.” He also has made a number of guest appearances on other shows, most notably as a contributor to “Today” which reunited him on set with Kathie Lee Gifford for the first time in years. He also has a monthly recurring role as a co-host on “Rachel Ray.”

Philbin was reportedly offered the opportunity to fill the vacancy at “Live!” left by Michael Strahan leaving to join Good Morning America, but he stated that it was unlikely he would rejoin his former co-host Kelly Ripa again.

While it seems we’ll never see him in as prominent a role as he once held for so many years, he certainly hasn’t grown camera-shy. Even at 84 years old, he still seems as charming and energetic as ever, and you can expect to see him on the small screen for years to come.