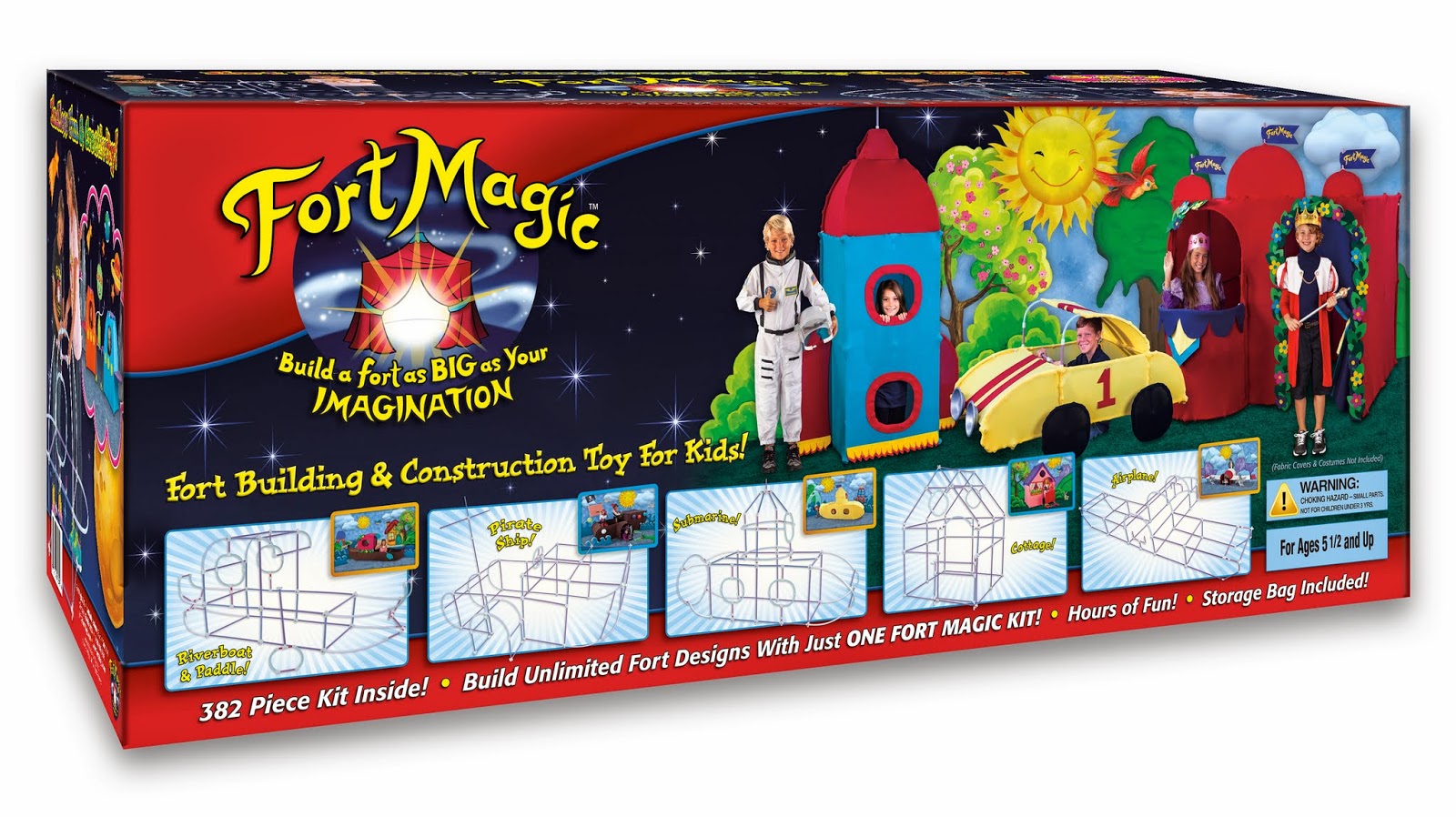 Erica Poe of Fort Magic, has come to the Shark Tank seeking a $75,000 investment in exchange for 15% of her company. Erica starts with a story, just like many other entrants into the Shark Tank; do you, and the Sharks, remember the time when we all were young and wanted to bring our greatest fantasies to life? There was some frustration that all of us had available were some couch cushions, pillows, card tables, and cardboard boxes – totally counterintuitive to the integrity of the perfect pillow fort. I should know, I only made one two weeks ago. It’s scary to think I can serve in my country’s military and drive a car.

However, Fort Magic seeks to remedy those non-structural forts. Fort Magic will allow a child to build a fort as big as their imagination, as the magic is all in the large number and variety of sticks and connectors which are included in every Fort Magic kit. With just one Fort Magic kit, a child can build unlimited fort designs, such as a castle fort, a pirate ship, or even a racecar. The product has even been called, “The best money spent on a toy ever.”

Barb asks if Erica has any numbers to share, and Erica starts by saying that Fort Magic has been open for 18 months. In those 18 months, she has earned $150,000 in sales, and she is selling almost entirely through the Amazon platform. Robert wants to know more about the product, and asks how big the kit is; each kit comes with a variety of pieces, including connectors, curves, and straight sticks of all varying lengths. The smallest straight sticks start at 2 inches and extend all the way up to 18 inches long, and the curves come in a size of medium, small and large. There are a number of connectors, including 6- and 3-way, allowing for a variety of corners to be formed with just one Fort Magic kit. There are 384 pieces in one kit.

The retail box is only 26 inches by 10 inches by 10 inches, which is relatively small compared to how much the buyer is receiving, but the kit also includes a storage bag with pockets for each size and shape of the parts included. Kevin, however, thinks that it will be difficult to get the Fort Magic item into retailers, as there is a very large footprint and a large amount of space required to store a dozen of the Fort Magic boxes.

Robert asks about the connectors, and actually stands up and begins to play around with the forts to understand more about the connectors. However, Erica says she has brought some samples and hands them out to the Sharks while Robert enters the Fort Magic fort. He says, surprisingly, it is very well made and extremely sturdy. Kevin asks about the patent of it, saying a patent might not be possible, but Erica says there is a patent pending.

While the other three Sharks test the samples they were given and Robert crawls out of the fort, Kevin asks about the numbers of Fort Magic. Erica doesn’t quite answer these as Robert changes the subject, asking about her background. Erica says that she was originally a stay-at-home mom for 15 years, and she loved doing that since she loved being around her children. Her son was playing with a dryer box which eventually broke, and she and the rest of her family began to play with the idea of a customizable fort system aimed for children. They actually had to invent the way to bend the sticks, and when she began to play with their prototype, she admits she had a lot of fun and when she finally covered it with a blanket, immediately fell in love with the product that she had created.

Mark returns to the important business, the numbers; but before they get to this, Lori asks if the fabric is included with the kit. The fabric is not included with any kit, and Robert jokes if there is a mom included with the kit to make the fabric; only Kevin and Mark seem to be taking Fort Magic seriously. Kevin wants to know about the numbers, and I think that Kevin and Mark are getting sick of the deviation from the numbers; Erica insists that she isn’t deviating from the numbers on purpose, but Kevin admits that he thinks she is. Mark has a sheepish smile on his face, and we finally are told what we’ve wanted to know for several minutes.

The Fort Magic Kit sells for $199, which causes all the Sharks to stop dead in their tracks. Kevin admits, “ain’t cheap.” The Fort Magic kit actually costs $40 per kit to make, and they could easily sell the kits for $50 but they are in the process of generating capital to ensure a healthy lifespan for Fort Magic. This means the margin of production is only 25%, leaving a whopping 75% of the sales as revenue. Fort Magic profits approximately $100 per kit.

Lori asks how much money Erica has personally invested in Fort Magic, which Erica says she has invested $50,000 while her mother has invested $200,000. In return for the large investment, the split moved from a 50/50 between Erica and her mother to a smaller split with the introduction of a third investor. This third investor has brought in a guaranteed $200,000 in exchange for around 35% equity, which prompts Mark to ask about the value of the equity. Erica and her mom were at 50/50, so the equity has now been split into thirds; Erica, her mom, and the third investor are all equal owners in the company. However, Erica has complete authority to negotiate up to 70% of the total equity.

Barb says that she find’s Erica’s enthusiasm “delicious,” as Erica is bubbling with excitement. However, the answers Erica has given to some of the questions is driving Barb nuts; she says that Erica is all over the place, and she wants to offer one shot for Erica. Barb asks what Erica’s top three priorities are for when she goes into her office tomorrow. Erica stutters for a moment, appearing like a deer in the headlights, and says she is caught off guard by the question. Erica asks if Barb means tomorrow morning, or within the next week, and Mark points out that Erica is indeed proving Barb’s point. Barb concludes by saying she has never seen an entrepreneur succeed without being hyper-focused on exactly what’s most important, and she does not find a good fit in investing in Fort Magic. Barb is the first Shark out.

Mark says that Erica is going 200 miles an hour and he doesn’t know what direction she is going in, and says she probably doesn’t even know what direction she is going in. Mark advises Erica to focus on something, anything, but then is also exits the deal. Kevin says that most families will not be able to afford a $199 children’s toy, and that is on the super high-end of the children’s toy business. If Fort Magic were to succeed, it would have to be sold for under $100, and Kevin is out.

Robert and Lori are left, and Lori says that she finds Fort Magic expensive because it doesn’t include everything required to build a proper fort. If the kit had included the fabrics, Lori says she would find the product a lot more attractive and investment-worthy, but for the price of $199 and the limited purchase, Lori is also out.

Robert says that one of the things he’s learned on Shark Tank, after five seasons, is that there are some products that the audience is going to buy in droves even without an official investment or approval from the Sharks. This is the “Shark Tank Effect,” and Robert believes Erica will sell a ton of forts after the airing of this episode. Robert concludes that he wants to make an offer, but the challenge is keeping her focused. For Robert to be involved, he would want to be an equal partner with Erica, and thus, offers a $75,000 investment in exchange for 50% of the business.

Erica asks for specifics or what Robert can bring, and Robert suggests selling the materials on the side as an available option. He believes he can bring it to retail by revising the packaging. However, Erica believes that the 50% equity stake in the company is too much, while Kevin points out the fact that Erica has done nothing to alleviate the perceived risk of investing in Fort Magic. All of the Sharks point out Erica is a bit scatter-brained, but Erica perceives this as enthusiasm.

Erica counter-offers with a $75,000 for 25% investment offer, and Robert says he will not change from his offer. Erica then passes up on Robert’s offer, leaving her without an investment from the Sharks.

Fort Magic Now in 2018- The After Shark Tank Update

Fort Magic is an interesting state of limbo – it either is selling really well, or is out-of-production and will never return. Both the online store hosted on the Fort Magic website and the Amazon storefront are sold out of the original Fort Magic Building Kit that was showcased on Shark Tank, but additional “expansions” have been created for the product which includes more connectors, sticks, and even some covers for your creations. The price is not even listed, but perhaps the most interesting thing to note is the suggestion for other products that are very similar to Fort Magic on the Amazon storefront. All of these products are far cheaper than the asking-price of $199 for Fort Magic, and even far cheaper than if Erica had been able to lower the price to $100.