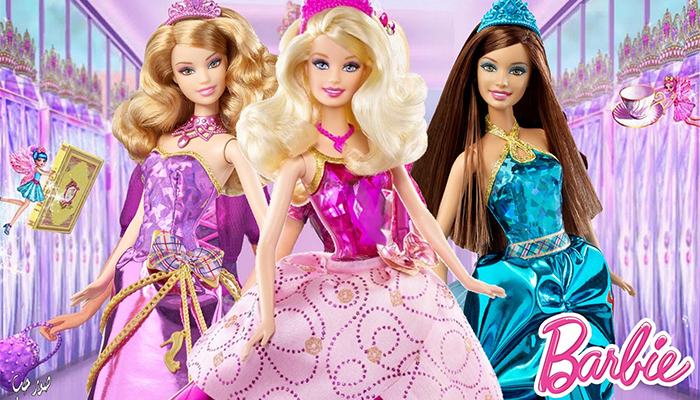 If you were told to name a doll toy off the top of your head, chances are, you’ll probably say BarbieーI mean who hasn’t heard of them right? Plastic, with bendy arms and painted make-up, Barbie dolls are one of the most popular toys for young girls. Having accompanied many children through the generations, they are seen by many to be an important part of the fashion doll industry; some may even dare say that they’ve become ea part of the American life. Since they were first created in 1959 by business woman, Ruth Handler, billions of Barbie dolls have been sold all around the world. They are currently the best, and most profitable product of the American toy company, Mattel.

Handler first had the idea of making a fashion doll after realizing the lack of adult-figured toys during the 1950’sーmost had been representations of toddlers or infants. Wanting to close the gap in the toy market, she presented her thoughts to her husband, Elliot, who was then the co-founder of the American toy company, Mattel. Although her idea was dismissed by many at the time, Handler would eventually create and design the first Barbie doll, based on an adult-bodied doll which she’d purchased in Germany. The toy first made its debut at the American International Toy Fair in March 9, 1959ーthat date would later be considered as Barbie’s birthday.

Since then, countless designs of Barbie dolls have been produced by the companyーeach with their own unique, different looks. In fact, just this year Mattel has announced that they will be producing them in three body sizesーtall, curvy and petite! Besides the doll itself, a number of accessories for the toys have also been released such as purses, shoes, and jewelry, as well as other merchandise such as cosmetics, books and video games. Barbie even starred in the popular Toy Story film series! While she may just be a plastic doll, Barbie has attracted a number of hardcore fans and collectors over the years and like all collectibles, there will always be some that are more valuable than others. So what are the most valuable, and expensive Barbie dolls? Read on to find out! 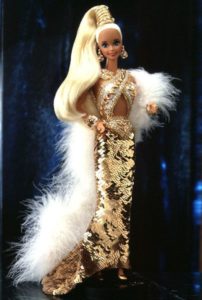 Designed by fashion designer, Bob Mackie, only a limited amount of the Bob Mackie Gold Barbie have ever been released; it was first distributed through a Mattel World of Imagination Party in 1990. The beautiful golden doll is also unique in that it features the designer’s signature. First officially release in January 1990, the alluring Bob Mackie Gold Barbie doll sports a beautiful gold sequinned gown with a soft, feathery white boa. With her platinum blonde hair pulled up into a high pony tail with a matching golden headpiece, only one word can describe her appearanceーelegant. She also comes with golden bracelets and earrings to complete her shiny, look. If you’re looking to add the designer doll to your collection, know that it’ll probably set you back at least $150 for one new in box with all its accessories

The first African American Barbie doll ever to be made by the company, the Live Action Christie was first released in 1968, alongside Live Action Barbie. Dressed in an orange and fuchsia print pant suit, she modelled a matching orange headband and a pair of orange heels. Unlike many of the traditional barbies, the dark skinned figure had flexible limbs; the waist could swivel and their knees, ankles and elbows would bendーa feature which allowed it to be positioned in many ways. While the condition of the doll is always an important consideration in determining its value, for Live Action Christie, you’d want to pay more attention to her hairーas the dark colour often fades and reddens with age. A new, mint-in-box version of the doll currently goes for around $300 online.

First released in January 1997, only 10,000 copies of the Pink Splendor Barbie doll has ever been made and distributed in the world; it originally retailed in stores for $900. Dressed in a beautiful rose coloured silk gown with delicate, gold lace trimmings, her ornate bodice also features elegant gold lace, over a layer of intricate pink taffeta adorned with gleaming rhinestones. Her exquisite dress also forms a wide, bow at the back that flows down to hover between the intricate pink roses on her backside. She also comes adorned with a lovely crystal necklace on her neck, along with matching crystal earrings; her hair is also put up in a graceful braid, with a matching headpiece. A match for any serious Barbie collector, this doll is likely to cost at least $350 today.

Although this Barbie set doesn’t actually come with a doll, don’t let that fool youーit will still cost you an arm and a leg! Different from traditional Barbie doll products, the Put-Ons and Pets Kitty Kapers comes with a pet and a lovely outfit for Barbie herself. Featuring her white kitty cat, complete with blue beaded eyes and a pink stitched nose, the set also comes with a colourful floral polka-dotted patterned skirt, adorned with delicate white lace as well as a matching pair of shorts and a long sleeved top. Oh but let’s not forget about the accessoriesーBarbie’s going to need her white, lace-up boots and kitty’s going to need her bowl of cat food as well! If you’re lucky enough to find one for sale, know that the current going price for one new-in-box is around $500. 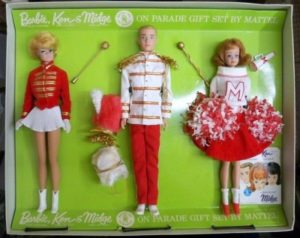 Released in 1964, this collectible set featured three dollsーBarbie, her boyfriend Ken and her best friend, Midge. Dressed in a red, long sleeve shirt with gold trimmings and a (dangerously) short white skirt, Barbie is definitely eye-catching in her marching band uniform. But what good would she be without her other half? Beside her in the set is Ken, who sports a clean, white uniform with red and gold stripes, along with long red pants. Don’t forget about Midgeーshe’s the third in the set, and is dressed in a white, wool boat-neck sweater (with a striking “M” logo) and a red knee-down skirt. Also included are two red and white pom poms, the pair’s uniform hats and a pair of marching batons. Awfully difficult to come by nowadays, a set in good condition will most likely set you back at least $600.

Created and designed by New York fashion designer, Devil Kroell for a charity auction event, this one-of-a-kind Barbie doll was sold to a collector for a whopping $1075 in 2010. Fitted in a fashionably stylish overlong sweater with a cute knot at the front side, the doll also sported a pair of snazzy gold pantsーcomplete with glow and shimmer. While one hand was adorned with a matching black and silver bracket, the other hand held in it, a beautiful red leather purse with an intricate golden chain. Hair slicked dashingly to the back, the doll also had on a pair of elegant heels which helped to fulfill the entire look. While there’s no doubt that this Devi Kroell Barbie looks fantastic, it might be a hard item to collectーseeing as how there’s only been one ever made in the world (which already has a home)! 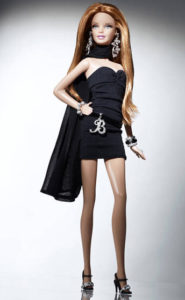 Designed by New York City jewelry designer, Lorraine Schwartz, this bling Barbie flaunts beautiful diamond jewelry (valued at over $25,000)ーincluding a pair of gorgeous hanging earrings, a pair of diamond trimmed high heels, a number of stunning bracelets and a signature “B” pendant around her waist. As a collaboration with the Council of Fashion Designer in America, only twelve of this doll was ever made in the world by Mattel, making it a truly unique collectible piece. Dressed in a black, tight-fitting tube dress, this Lorraine Schwartz Bling Barbie sold for a hefty sum of $7500 at a recent auction (which is cheap, considering the value of the diamonds). Considering the fact that only a limited number exists, it may be a challenge to locate one for sale, should to want to add it to your collection.

The first Barbie doll ever to be created, this original figure is one of the most sought after by collectors today. Originally introduced on March 9, 1959, this phenomenal figure is dressed in a striking black and white bathing suit, which accentuates her slim body; only 350,000 units were estimated to have been released at the time. With distinctive white irises (later ones would have blue irises), and arched eyebrows, this original Barbie doll truly has vintage written all over it. One attribute that distinguishes from the later barbies, is the fact that she has round holes on her feet; another distinguishing feature is that the doll has no marking on the back of the head. While this doll has been recreated many times throughout the years, only the original from the 1959 commands the highest valueーwhich is estimated to be in the thousands.

Created to celebrate Barbie’s 40th birthday in 1999, this anniversary Barbie fashions a flowing twilight garb which is reminiscent a gypsy dancer. Adorned with white gold jewelry, this raven-haired doll also has around her waist a belt that is encrusted with 160 diamonds (her bikini also has some bling) from the international big name jewellers, De Beers. Thought to be one of the most valuable, and expensive Barbie dolls of all time, the De Beers 40th Anniversary Barbie last sold for a stunning $85,000 in auctionーcomparable to the price of a car! If you’re itching to add this dear doll to your collection, then you may have to be prepared for a major dent in your walletーthat is, if you’re lucky enough to find one for sale!

Created by fine jewelry designer, Stefano Canturi, this one-of-a-kind doll currently has a hefty price tag of $300,000ーit had taken Stefano himself close to four weeks to design and complete from head to toe.. Commissioned by the Toy company itself, the precious Stefano Canturi Barbie features an upscale jewelry set which includes Stefano’s “Cubisim-style” necklace made from three carats of white diamonds, and a carat of the extremely rare emerald cut pink diamondーshe also wears one of the company’s iconic diamond rings on her right hand. From her beautiful black dress to her perfectly done eyelashes, this high fashion Barbie doll will truly dazzle any crowd with her beauty. It was auctioned off at Christie’s in New York for $300,000 in October 2010, with the proceeds going towards the Breast Cancer Research Foundation.

Are you a Barbie doll collector? Let us know your favourite piece in the comments below!