Top Ten Most Expensive Chess Sets in the World 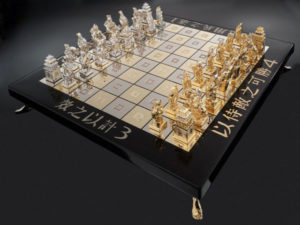 There is a legend that the game of chess was invented in a kingdom within India many years ago. When presented to the King, he asked one simple question to the maker. “How much would you like for this?” The creator replied “I would like one coin for the first square. Then, two for the second. And four for the third.” And so on. After adding the value of all the subsequent squares together, the King found it a better deal to hand over his kingdom for the game. Here, we will take a look at ten chess sets which do this legend proud. 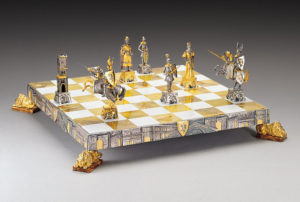 Starting off our list is a 24 karat gold and silver plated masterpiece. With solid bronze piece interiors, even the pawn is significantly heavy. Even the board itself is made of onyx with gold and silver embeddings. Each piece, including the board itself is fully hand crafted and signed by the sculptor, who has plenty of room to do so given the dimensions of the pieces are 4.5 cm in both length and width. With even the most minuscule detail included in every piece from rook to queen, this is a work of art that should be seen to be believed. 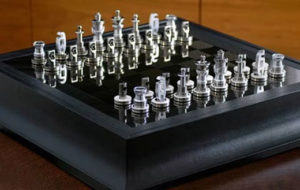 It’s not every day that someone can associate chess with high speed. With this board and piece set however, that was the aim of the designer. With pieces that were components of the suspension, uprights, wings, hubs and cockpit sittings, and a board designed to add a bit of friction to movement, players may be tempted to take the fastest and most aggressive move possible. The board itself is made of leather and sterling silver, while the pieces are made of a combination of aircraft aluminum, carbon fiber, stainless steel and titanium. 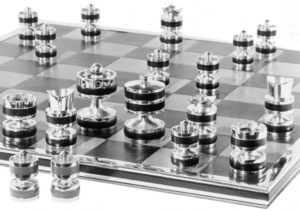 Created for the 1977 celebration of the Queen’s Silver Jubilee by Geoffrey Parker, this is among the highest works of game art one can buy for under $100,000. Having won the Design Counsel Award in London and endorsed by the United States Chess Federation, this set is unique in both its luxury and simplicity. With pieces made of pure sterling silver core components, buyers can also add a golden coating onto the pieces for an additional fee. The original 1977 set also holds a Silver Jubilee Hallmark notation on each piece which greatly increases its cultural value. The board itself is, to be expected, lined in the finest sterling silver. 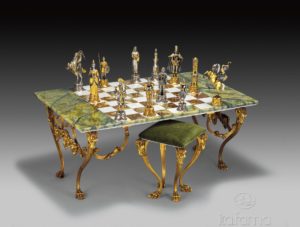 A set that celebrates the Frankish Moorish Wars of the late first millenia, this piece pays great homage to centuries long past. With larger than life figures which include knights, griffons, and royals all adorned in 24 karat gold, and are on a board made of onyx, with bronze and marble inlays. Each piece is crafted using the lost wax method of casting, allowing for even the smallest detail to be shown by the sculptor, who has also signed each piece individually. 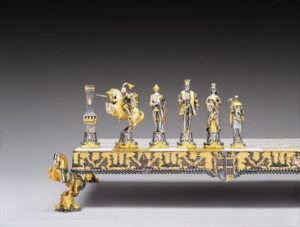 Another piece showcasing Carolingian military figures, this piece comes as an interpretation of the Turkish-Carolingian war. With a similar lost wax method, Benzoni decided to have the pieces filled with a bronze core and adorned in both sterling silver and 24 karat gold. The pieces appearances are somewhat more historically accurate and as humble as one can be while still be silver and gold plated. The board is likewise silver lined, using polished marble as the play surface. 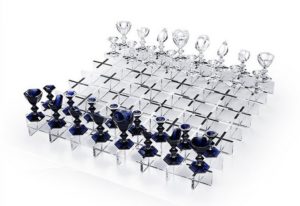 The French founded luxury crystal glassware company Baccarat has long been known as a pinnacle of perfection in glass work. To celebrate their existence of a quarter of a millennium in 2014, the company had a board created, dedicated to some of their most iconic glass designs. The result is easily the most elegant drinking game on the planet; Simply fill the pieces with champagne, and when a piece is taken, drink the contents until check-mate. Consumer versions of this set have also been made by the Japanese company Oki Sato for under a tenth of the price, making it just more than the cost of the average sedan. The board is created using clear crystal to round out the aesthetic making for a very unique play experience. 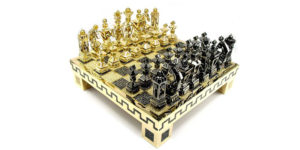 With diamond in the name, you get what you expect in this set. With core pieces being made of white gold or yellow gold, and studded in diamonds, this is clearly a testament to wealth. The pieces themselves have a slightly abstract aesthetic, which takes the traditional shapes and plays with them to better enhance the appearance of the jewels held within. The board also happens to be diamond studded with 9,900 black and white diamonds making up the board of over 180 karats. All of this being handcrafted, each board and associated pieces take nearly 5,000 hours to complete. Bernard Maquin’s design is by all accounts, an extravagant display of wealth in a game dedicated to strategy. 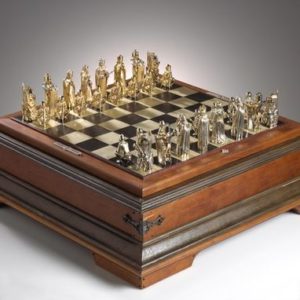 A set designed in 1972 for the Cole family, Grahl’s masterpiece spares no expense. With 14 karat gold pieces that weigh in at nearly a pound each and featuring jewels or various origin, this is among the heaviest chess sets on the list. Similar to many other chess sets, this one was created using a lost wax method to create figures representative of medieval Europe including Rooks that resemble castles upon peaks with every detail of each rock carefully placed. The board itself is made of cherry wood and embedded with sterling silver as well as Gaboon Ebony. The board also has a matching cherry wood and hand rolled glass cover to properly showcase the set. 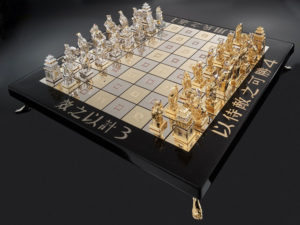 Many chess players have at least one copy of the Art of War by Sun Tzu in their collection and advanced players may even find the passages within to be remarkably useful. For those who truly cherish that work, there is a set that sits above all others. With each piece being made of solid gold, and adorned with rubies, sapphires, diamonds and emeralds, each bit is truly a masterpiece in jewelry. Each piece is crafted in detail to represent figures that would easily be recognizable from the Qin dynasty. The board is likewise made of solid gold. 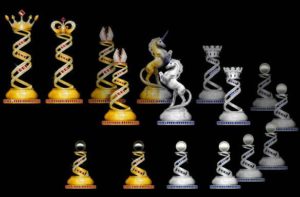 Topping our list of most expensive chess set is one truly only the richest of royals could own. With king pieces that hold 73 rubies and 146 diamonds on their own, as well as covered in 18 karat gold, it is arguably more expensive than entire sets mentioned on this list. The remaining figures on the set include similar numbers of rubies and diamonds, as well as pearls and sapphires which cover the more abstract pieces, as well as accent the exquisitely crafted unicorns which represent knights. At this time, a board unique to the pieces has yet to be designed which would only cause this astronomical price to rise yet again.