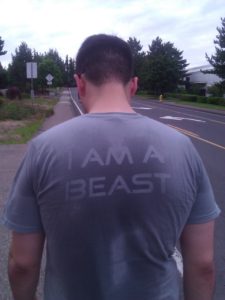 Ben Wood was attending medical school when he had an epiphany that would later result in a business plan. While studying chemistry, Wood came up with an idea for a new kind of athletic wear. By inventing a chemical applicant that can be applied to t-shirts or other forms of outerwear, Wood created a brand of clothing that displays messages once it has become drenched in sweat. Now, this might seem like a strange concept at first, but it’s actually pretty brilliant. These messages only show up when you have put enough effort into your workout to actually begin sweating. Making these messages appear can become a driving motivation to work harder so you and everyone else can see just how much you are willing to put into your health and fitness.

Deciding that this new line of clothing was definitely something worth investing into, Wood ultimately decided to drop out of medical school so he could focus more of his time and energy into making it a successful brand. After spending a few months working on getting the ViewSport Shirts name out there, it became pretty clear that the business was going to need an experienced investor to help get it up off the ground. Taking such a new business to the Shark Tank was definitely a risky idea, since the Sharks like to have a strong idea of what the sales and marketing looks like, but Wood had enough confidence to bring his idea to the Tank anyway.

Wood enters the Shark Tank seeking a $500k investment for a 20% stake in the ViewSport brand. Then he goes on to say that people who work out, whether it be at home or in the gym, want to see results. However, the only way you can see the results of your effort is if you are willing to put in a lot of hard work. Most people are willing to put out money in order to buy the top of the line sportswear because these products are supposed to help them reach their goals and see more prominent results. That’s why he decided to create ViewSport. These shirts have “secret” messages encoded into the shirt material and they will only appear once you’ve started sweating into it.

The whole idea of this brand is “motivation through perspiration”. The harder you work, the quicker your shirt will show off your efforts. Each ViewSport shirt can be customized to show whatever kind of message you want and will offer you that extra push forward when you feel like your efforts aren’t paying off. Wood believes that the sporting industry is in desperate need of something new, and he believes that this product is just the thing that people will go crazy over. 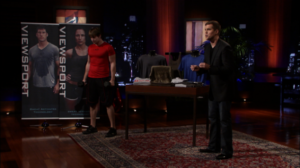 Kevin O’Leary is the Shark to ask about the sales that have been made so far. Over the past 3 months alone, ViewSport has made around $140k in sales. Another great thing about these shirts, in addition to already having so many sales, is that Wood is the one who invented the technology for it and it is currently patent pending. He actually had the idea for it when he was working out himself and saw sweat patterns in his shirt. Shortly after that he put his chemistry background to the test and worked out formulas until he eventually had something that worked. After that he dropped out of medical school to focus on his business full time.

Right now he has been making sales to schools and colleges by taking their shirts and applying the chemical technology to said shirts, then selling them back to the schools. He plans to later license the technology to other brands, or to potential start his own line of shirts.

Barbara Corcoran sees a potential issue in having to sweat to make the message appear, but Wood assures her that isn’t the case. All you really need to do is to get the shirt wet and then the words will show up. This is why he thinks it would be a great idea to have a line for kids, because they can wear them to amusement and waterparks. Still, Corcoran is skeptical because when she works out, she doesn’t generate a lot of sweat so it might be difficult to make the message appear.

Wood attempts to show them an example of the shirt by spraying it with some water, but when he holds it up, there is no message. This causes the Sharks to ask if he has ever received any complaints from customers claiming that the shirt is defective, but he says there hasn’t been any so far. The next shirt he sprays does work, but Corcoran is concerned about the visibility of it. As of right now, all the shirts he has are monochromatic, but he’s working on creating a new chemical technology that will allow colors to show instead.

When asked about what he plans to do with the half a million dollar investment, Wood states that he will put it towards creating a sales team so that they can get the ViewSport name out there and work towards licensing it to name brand active wear companies. Daymond John doesn’t think this is a good idea because Wood as already invested some money into doing that already, and still no one really knows about ViewSport. Wood convince John that his product is on the fast track to making $500k in sales by the end of the year, but with that logic he wouldn’t need an investment from the Sharks. He claims that he needs their connections and relationships, not just the money. John just is severely underwhelmed and decides to dorp out.

All of the Sharks seem to have an issue with his valuation of the company. They understand that yes, he needs someone with experience to help get ViewSport out there on the market, but he is asking for way too much money in addition to needing a lot of their time and resources. Mark Cuban is the next to decide not to make an investment. The next to make his decision is O’Leary and he is frustrated because he thinks the product is a good one, but he is “financially insulted” by the asking price. If it weren’t for that, he probably would have made an offer.

That leaves two Sharks left in the Tank. Corcoran speaks up next and though she doesn’t necessarily have an issue with the price tag he put on ViewSport, she just doesn’t think the product itself is a good one. She can’t see past the fact that the shirts are too monochromatic and that it would take a lot of sweat to see the message. She can’t give him an investment because she thinks this idea is a bad one. Robert Herjavec is quick to agree with Corcoran and decides that he also will not be investing because it’s too “gimmicky”.

With no Sharks left in the Tank, Wood has to walk away with no new investors into his company.

ViewSport Shirts 2018 Update – After the Show 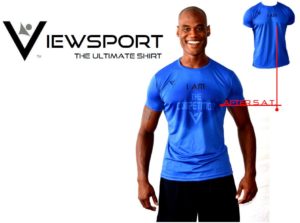 It seems like Ben’s downfall in the Shark Tank was that he overestimated the value of his brand new company. A few of the Sharks were pretty frustrated with this because they did see a potential in the brand, but it just wasn’t worth the price at the time. Despite not receiving an investment though, Ben refused to give up on ViewSport and it actually seems to be doing pretty well as of right now.

Since appearing on the show, the ViewSport social media pages have been actively updated and the company now has its very own website, http://www.viewsport.us/. ViewSport has also been receiving a lot o attention from the press and has featured in articles in Time Magazine and the Wall Street Journal. Not only that, but it is constantly being boasted about on their Facebook page that they supply shirts to the US Army and Navy, ESPN, and various other sportswear clothing lines. Needless to say, Wood found his opportunity for success despite being turned down by all of the Sharks.