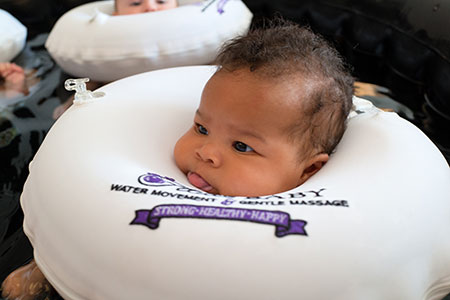 Christie Eisen, the proud founder and sole owner of Float Baby, has just stepped into the Shark Tank. She is seeking an investment of $150,000 in exchange for 30% of her company. Sharks, she starts, people that exercise weekly have been proven to have better physical and cognitive strength. People who have routine massages can also improve blood flow and muscle tone. So, Float Baby is the first and only flotation and massage facility in the United States for babies. Babies as young as two weeks use hydrotherapy and a bit of massage to become happier, and actually stronger, smarter babies.

So, take a look – Christie clicks on the monitor behind her which showcases a video of a baby receiving a massage from Float Baby. The child, being held by the mother, has a flotation device wrapped around its head, which looks incredibly silly and all of the Sharks begin to laugh. The babies float, looking unsure of what they should do, but then the scene cuts to a baby receiving a massage on her feet and arms. All of the Sharks laugh and cannot believe what they are seeing, but Christie is serious. After “floating babies” 1,000 times, she assures the Sharks that this is a proven concept.

Rather than swim with the Sharks, who wants to float with the babies? Guest Shark Chris Sacca, investor of companies such as LinkedIn and Twitter, asks who has proven this, and even Mark agrees since Christie made an awful lot of claims. Christie explains that this data is validated by seven other countries, but Mark says that is not an answer because that means nothing. Chris asks for research that shows where babies who float receive better health, and that includes the cognitive outcome that Christie mentioned earlier.

Christie explains that the infant massages are performed in Newborn Intensive Care Units (NICUs) across the United States for newborn babies to help stimulate the growth hormone and help them eat better and grow faster. The largest study done on floating-in-water programs was done by Griffith University out of Australia. They looked at over 7,000 children ages 5 and under, and found that the babies in the water program hit their milestone markers by as early as 50% compared to the other groups.

Daymond asks who was the first person to “snap a hemorrhoid pillow around a baby’s neck and float them down a river.” Christie explains that this was started in Japan five years ago (of course), and there are numerous companies that make the floatation ring. In fact, Christie has a patent pending on the cover, which is larger than any existing floatation device on the market. Should the patent clear, Christie and Float Baby could be seeing children as early as 2 weeks being floated. Daymond asks for the business to be explained to him from the very beginnings.

Christie starts by asking the Sharks to imagine a physical storefront. Each baby has their own individual tub; Christie has 3 individual tubs, so this means she can do 3 babies per class. They float for about 20 to 25 minutes, and an hour of floating costs $65. Kevin then points out if he wanted to start “Mr Wonderful’s Float-a-tron,” he could do this as there is nothing proprietary about putting a pillow around a baby and leaving it to float. The whole point is that Christie could have competition right away, sort of like a nail son. But Christie says that it is not since she is here for one reason, and that is to seek funding for bigger tubs. Unfortunately, she is currently having to graduate clients prematurely at six months because of the depth of her tubs. She has located a manufacturer in China that makes specific tubs for floating babies – “baby spa tubs.”

Mark asks about the sales figures, and Christie says that in the first year, she made $84,000, and in the second year, they are on track to do $60,000. Mark asks if she is not selling out all her time slots, which Christie confirms she is not and that is her second challenge – Mark corrects her and says that is her first challenge, as you should always be running at maximum capacity prior to expanding. If she sells enough, then Christie creates all of the dollars she needs for her tub, and maybe this is a different question, Daymond says – things need to be going viral.

Chris gives the idea of going to some mom pages on Facebook and partnering with them to showcase the classes and effects, and Daymond asks if she has been marketing using social media. Christie says that social media is “absolutely not” her strong point, and Daymond says that this should have gone viral at this point. Mark then asks the other Sharks to be silent for a question, and he asks it; what is Christie’s grind? She does not know what that means and asks Mark to clarify, which causes Mark to exit out of the deal first.

Mark’s early exit appears to have shaken Christie, and Mark explains himself. The grind is that Christie needs to get out there and sell, and she can control her own destiny by going out and grinding. Go to “Mommy and Me” classes and give out her business card, but go to wherever moms are and give out a coupon or something to get the idea out. Get in your car and grind and go sell. Christie explains that her background is in medical device sales, but Mark remains unconvinced and says that she had to go out and sell earlier in her career. Christie affirms that she knows how to sell, and in between classes, she is meeting with doctors and physical therapists. 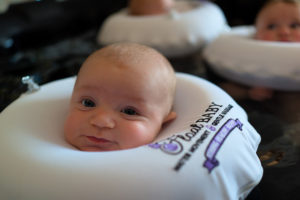 Chris asks if she is building business, and Christie says that she is working in her free time to get the business growing. Still, Chris Sacca gives a very blunt statement; he does not see the thing that Christie is uniquely amazing at. He sees it as a business for her individually, but ultimately, it cannot scale and grow, so Chris is out.

Daymond points out that in business, there are purely fundamentals – money will not solve everything, but the principles will get most issues solved. Her biggest challenge for Float Baby is the fact that she does not know how to get the message out to everybody in a very savvy and creative way that would bring moms to her and understand the value of floating a baby. Christie agrees and acquiesces that she does need help with advertising, but Daymond says that the journey is ultimately Christie will have to take herself. Daymond is also out.

Barbara believes that Christie is a fantastic practitioner and fully believes in herself and her product, but there is one thing that every entrepreneur that has invested has in common; tremendous energy and hustle. But Barbara does not see that in Christie, so she recommends either finding a business partner to run that side of things, or she must keep this on a personal level. It just is not investable, so Barbara is out of the deal as well, leaving just Kevin remaining.

Kevin explains that he has a different problem from the other Sharks; he laughed heartily at the video because it is funny, but he bought into the merits and cannot believe it. If Christie had come in and said that she wanted to use the Shark Tank platform as a medium to show that this thing exists and wanted to license out the donut used to float the babies, that would make sense. She already has the patent on the cover, so if she came in and said that she wanted to sell it for $69.95, the “Shark Tank Effect” would do the rest of the work and the thing would continually cycle its entire inventory.

But ultimately, Christie is running a baby spa and as an investor, the idea of giving $150,000 to a baby spa is outrageous. Kevin does not see this making $1 or $2 million, let alone $5 million. Christie explains that she has thought about selling the rings but not the tubs, and she cannot give an answer to each Shark. Kevin cannot believe that Christie does not see the opportunity she has missed, and thinks she deserves to be punished for such shortsightedness. Christie reaffirms that she needs help, but Kevin says that he does not know if she will take any of the advice that the Sharks have given her. This is the Shark Tank, not the Advice Tank – this is an investor’s opportunity.

Kevin is the last and final Shark out, and as Christie leaves, Daymond and Kevin ask to see the video one more time before having a hearty laugh at the expense of the confused babies.

Float Baby Now in 2018- The After Shark Tank Update

Since the appearance on Shark Tank, Float Baby appears to be struggling for business. Christie really hurt herself by not trying to license out the idea and service, as there is only one Float Baby facility available in Houston, Texas. However, Christie has found it appropriate to lower the price down to $55 for a single baby session, or $198 for a group of four babies (I assume this means that she only has four tubs available.) However, Float Baby does have an application and website created where customers can manage their sessions and reserve a class.

The courses offered are for a newborn floating, which is from 2 weeks to 8 weeks, or a regular floating session, which is from 9 weeks to 6 months. They both offer floating and infant massage instruction, meaning you can take home some knowledge on how to promote your baby into healthy growth.

Of course, here is the video that was shown on Shark Tank: https://www.youtube.com/watch?v=W4ncZNbt-lA