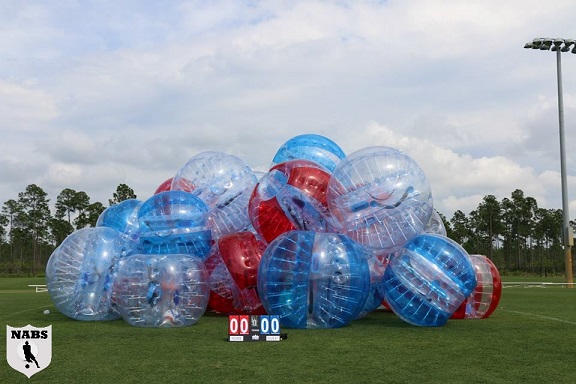 John Anthony Radusta, the chief executive officer (CEO) of Advanced Sports Technology, has just come to the Shark Tank. John is seeking an investment of $160,000 in exchange for a 10% equity stake in his business. Advanced Sports Technology is at the forefront of a new sport that is sweeping the entire nation like a tidal wave. This, John says, is the national association of “bubble soccer.” Behind him comes out a referee and four people surrounded by huge, inflatable bubbles.

All of the Sharks burst into laughing and Robert immediately says they need to try it. The referee blows his whistle and the game starts, and the four men immediately run into each other and bounce backwards due to the bubble. Robert is impressed that they really can play, and eventually the red team scores a goal over the blue team. Lori applauds and the bubble players hustle back out. In bubble soccer, there is one thing that is missing from the full game, and that is full contact between each other.

You can get physical, and John pulls up a video that displays some impressive bubble soccer plays. You can deliver some big hits, and one guy actually flips 180 degrees in his bubble, and fall down laughing like you never have before. All of the Sharks cannot stop their fit of laughter, and John asks who is ready to carve their name into sports history. Of course, all the Sharks ask to try it, and three of the male Sharks stand up and suit up in their bubbles. John helps each Shark get outfitted, and Daymond and Mark begin to bounce off each other. Mark falls over and struggles to get up, while Daymond takes on Robert.

Lori and Kevin, who chose not to participate, cannot stop laughing at the antics of the three, and this segment is surprisingly light-hearted. Daymond and Mark struggle to get up and require help from the referee in removing their bubbles, and eventually they seat themselves and get serious about the business at hand. Kevin first asks about the business model.

Advanced Sports Technology, John explains, is a “one-stop shop” for the perspective bubble soccer entrepreneur to get everything they need to be part of the sport and be part of the organization. In fact, they just launched their 40th affiliate. The relationship is symbiotic as the person runs the league, and Advanced Sports Technology serves as an exclusive equipment provider and lead generation partner for the smaller leagues. Daymond asks, before they get technical, did Kevin play? Kevin just says he watched the idiots test the product. 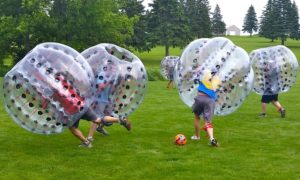 ll of the Sharks admit it is a lot of fun, and Mark says that while the bubbles were fun, nobody cares about the sport of the soccer. John explains that there are two types of events – there is the private event side, where people just want to get in the bubbles and bounce off each other, and there is the tournament and league side where people are serious. People are coming back and playing games every week, and bubble soccer is live in 39 cities with 8 to 12 teams per city.

Lori then asks the mix of events, and John guesses that the mix is around a 50/50 split. However, Robert says that from a promotional side, they have rented similar things. John knows that they did not invent the sport, but the way he got into the business was seeing viral videos from leagues in the UK and Australia. Lori asks how big the leagues are in Europe, and John says that they are thriving; as an example, in the United States in 2014 alone, the largest number of searches per month was 55,000 searches. In 2015, it rose to 85,000.

Robert asks for the sales of the companies in Europe, but John explains that is all private company data that he does not have access to. So John truly does not know how many teams or leagues there are in Europe, but in the past year, similar leagues have popped up in Hong Kong and Taiwan, among many other locations all over the world. However, Robert and Lori are curious how many teams there are, and John simply says that the number of teams vary based on the season.

Kevin then says he does not care about what happens in Australia, as he is investing in the United States right now. Kevin asks for the revenue figures for this year and the year after that. Advanced Sports Technology has only been available on the market for 13 months, and so far, they have done about $355,867 in sales. This is coming from a variety of channels; year one was exclusively equipment sales, and in the second year they created a lead generation and referral system that functions on a cost-per-lead basis. This year, they have been increasing sales by 38% from month to month.

Kevin asks for a solid dollar figure for this year’s projections, and John estimates just over $430,000. On that money, he should make about 23%, meaning that $100,000 of that will be pure profit to grow the business. The year after that, they are expecting between $683,000 and $742,000. Mark says that knowing your numbers is one thing, but picking numbers out of the air is another. John explains that his numbers are based on the free cash flow model with a diminishing growth rate over 60 months, meaning, how much money will the company have freed up at one time to pay their debts or grow the business.

Kevin is blown away and says that John has two guys bouncing off each other, but he is forecasting his business using the discounted cash flow method? The idea is ridiculous. Mark asks if the company manufactures the bubbles, which John confirms; each bubble costs $150 to $160 per ball, which is incredibly expensive. They sell four different packages to their end customers, ranging from $4,000 up to $16,000. Mark understands the method and explains that it is an investable business over a period of time. 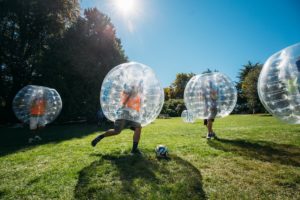 Robert asks how much money will the $4,000 package make over the next year, and John explains that they work with the league owners in different ways. They offer different league protection plans where the owner can pay anywhere from $90 to $120 a month. This is also from lead generation, since a single person will pay to join the league. Lori then admits that she finds the entire thing confusing since bubble soccer is in two different markets. Lori then asks what it would cost to use a pair of bubble soccer bubbles for a day, and John estimates that a typical birthday party would bring in anywhere from $300 to $500. These are done through local franchisees, meaning that Advanced Sports Technology only gets one-time sales.

Kevin then says that it bothers him when people come into the Shark Tank and the Sharks attempt to redefine the business model, since it means that the model is confusing. Kevin does not know how to make any money, and finds that the explanation was poor. Kevin is the first Shark out of the deal.

Lori then says that the product is great for the consumer, but she does not see a vision for the league, so she is out. Robert admits that the longer John talked, the more confusing things got, and eventually the entire thing fell apart. Robert is out of the deal. John then explains that on the tech side, they need some help scaling things, and Robert uses this as an example since it is now a tech business. Robert suggests to pick one part of the business and grow it.

Daymond then says that he actually takes his hat off since John scaled the company quickly in 13 months, but the reality is that it might not scale much larger than it is today. Daymond is also out of the deal, leaving just Mark left in the deal. Mark explains his thoughts; John is not in the soccer business or even the rental business, but more in the business opportunity business. He is creating opportunities, and the key is the affiliates.

If John came in and said that he had affiliates in 39 cities, and each affiliate made $25,000 per year, that would look far better on the company. Using the affiliates and growing the leagues should be the foundation of the pitch, but ultimately, the business pitch was so convoluted that John missed the precision of explaining the plan accurately. So, Mark is the final and last Shark out of the deal.

John says that he finds this surprising, but Kevin and Robert disagree since there are five Sharks, all of whom think the business plan is something that it actually is not. Unfortunately, John and the exciting sport of bubble soccer by Advanced Sports Technology do not find an investment in the Shark Tank.

Advanced Sports Technology Now in 2016- The After Shark Tank Update

The biggest problem I subconsciously caught myself doing while researching the aftermath was, do I search for “bubble soccer” or do I search for “advanced sports technology?” I searched both and, well, Advanced Sports Technology is not the only bubble soccer business in the United States. I found numerous leagues all over the country, none of which I could trace back to John and Advanced Sports Technology.

Focusing on just the Advanced Sports Technology website, I was surprised at how vague the website was compared to the Shark Tank appearance. There really is no clear, concise business plan – there is some gimmick about “from the board room to the locker room,” and includes something about a “psychological model and an independent assessment of business operations.” I just don’t know what to make of this, and even the “About” page left me with more questions than I came in with. For all intensive purposes, it appears that other, more savvy and literate entrepreneurs have come in and swooped up John’s potential market from underneath him.