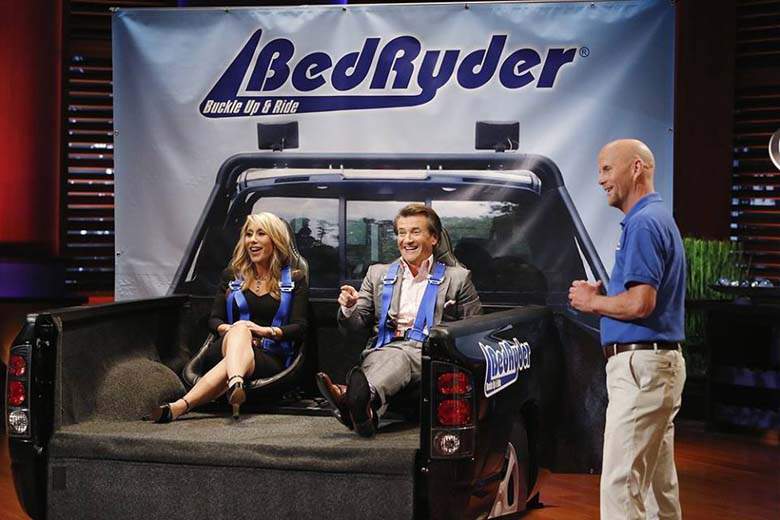 George Conway, from Chattanooga, Tennessee, is the representative of the BedRyder. He has come to the Shark Tank in order to seek an investment of $200,000 in exchange for 15% of his company. George launches with a story; riding in the back of a pick-up truck is the greatest feeling alive. The problem is that riding in the back just is not safe, until now. George then takes a huge rig consisting of two seats and belt buckles, throwing it in the back of the model pick-up truck behind him. George mentions that he is 53 years old and even then, lifting the BedRyder isn’t that bad. Lori then asks if there is anything inside the truck that George is securing the system to, which George explains there is 3 bolts in the truck; the user has to drill the holes in their own truck in order to secure the BedRyder down.

The BedRyder system adds the convenience seating of an SUV to the utility of a pick-up truck, creating what is frequently referred to in the south as a “Truck UV,” or truck utility vehicle. Take an SUV and a truck and when they come into a crash at an intersection, this is what they form, the ecstatic George explains – they form the BedRyder. Lori then asks if George has done crash testing or any other testing, and George says yes, he has done his own testing but all by accident. His best friend, Cary, with his two sons and George, went down to a NASCAR race. The car was destroyed “pretty good,” but everyone in the truck was fine. 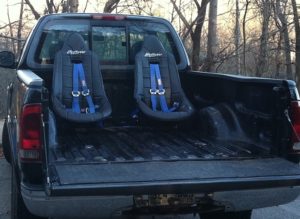 Mark then asks about the sales of the BedRyder. George then says he has sold 800 units so far, all on the internet. Those units are over 4 years, which Robert says is quite low. Robert then says he is curious where the inventor is, and George explains that Cary has been his best friend since they were 7 years old. Cary handles all of the operations – he gets the chairs assembled and brought to Atlanta, and George is in charge of all the sales and investments. Mark then asks what percentage of the company Cary owns, which George says is 85% of the company. George is stuck with 15% of the company. Kevin then explains, the reality is that the business can support one person or the other – it cannot support the both of them. 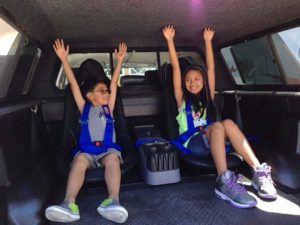 There is a huge industry selling aftermarket products to guys with pick-up trucks all over America, Kevin explains. So, why is the BedRyder not available at these shops yet? George explains that since he came aboard, six months ago, he has worked with an online company who specializes in truck accessories. They just signed a deal with the company, who will begin to sell more BedRyders. Robert asks if that is how George is going to grow the company, but George reveals that he has five ways he intends to grow the company.

The first is that George has 800 people who have invested in the company to purchase a BedRyder unit, so he is calling these people and offering the incentive to become a sales representative of BedRyder. These people receive $100 per sale they make. Robert then interrupts to ask where BedRyders are made, which George says that they are made in America. The frame is what BedRyder actually manufactures; they receive the frame, seats, and buckles from Atlanta. Each BedRyder costs approximately $300 to make, and are sold for $690 a set.

Robert then says that he loves the idea and finds it great, but ultimately, it is too expensive of a product. They need to be manufacturing the BedRyder for $100 in order to wholesale it for $300 to then enter retail at $500 to $600. George intends to do this with a purchase of a thousand units; should he receive $200,000, he will invest this into an order of 1,000 units. At this point, he can negotiate with the supplier to bring the price down to $200 a unit. Lori then voices her concern; she is worried about crashes and rollovers. For her, those are a huge liability red flag, and she cannot move past that, so she exits the deal first. George then says that his door is always open so should Lori choose to re-enter the deal and invest, she can do that. 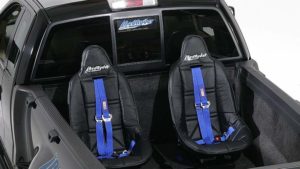 Kevin then says that he wants George to take the truck and drive it off a cliff. George then says that while he likes Kevin, the door is open for only so long. Kevin then explains – he likes George and the energy he brings since he is a great salesman, but Kevin does not believe in the product and wants George to sell something else that is not awful. On this particular idea, Kevin is not interested in investing his money for the liability reasons as well, and exits the deal shortly after Lori.

Mark then steps in and says that he likes the product and loves George, and knows the business; he asks George if the industry is a cash-intensive one, which George quickly agrees with. The cash-intensive nature does not bother Mark, and due to the nature of the industry, they will be turning over a lot of inventory and the entire cycle is very predictable. But George has no idea when the next order is coming, or in the flow in which they will come – this means that George will always have too much money sunk into inventory, which will make it far too difficult for Mark to get his investment back. So, Mark is also out of the deal.

Robert says that he likes the product, much like all the other Sharks, but just does not see the BedRyder replacing the ease of SUVs. So, Robert is also out, leaving Barbara as the last Shark. Barbara starts by saying that she finds the idea phenomenal, and everything about it says “fun” and happy memories. Barb’s dad actually let three of his kids hang off the back of his station wagon at a time. However, the reality is that George is only a partner at the rate of 15%, so the Sharks are not even talking to the majority owner of the business. However, George says that they have discussed the Shark Tank appearance and George has the full authority to make whatever decision is made. The million dollar question, though, is “who is Cary?” Barb then does not know who she is buying into, and is the last Shark to exit the deal.

BedRyder Now in 2018- The After Shark Tank Update

The BedRyder is still for sale, but the health of the company is quite questionable. While the original BedRyders were sold for around the $700 price range, the new models are being sold for the price of $749. Worse, there are only 4 reviews on the BedRyder website, but all 4 of them have come back as a 5 star review (this low amount, yet strongly received amount of reviews can call into question the ethics of BedRyder since it is possible that George and Cary could be asking for friends to leave a review that isn’t honest or ethical.) BedRyder now comes with a customizable color harness available in black, red, or blue, and includes a variety of added features such as weather cover seats and even a new installation kit. BedRyder ships for free to the continental United States. However, the last reviews for BedRyder were posted in October of 2015, which means that BedRyder could be on its way to closing down due to bankruptcy.