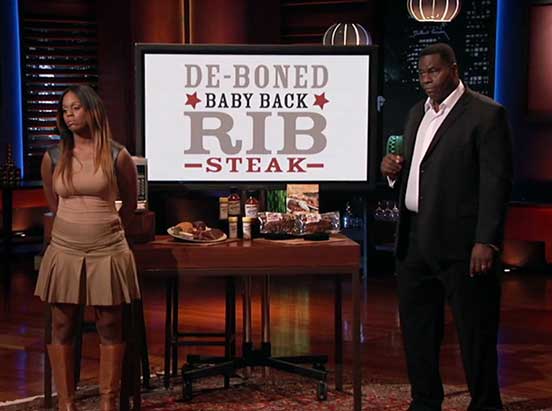 Al “Bubba” Baker is from the small town of Avon, Ohio, and has come to the Shark Tank with his daughter Britney. Bubba is seeking an investment of $300,000 in exchange for 15% equity in his company, which is the De-Boned Baby Back Rib Steak. Britney is going to be responsible for making ribs in the microwave, for the Sharks, in exactly two minutes. During the two minutes that the ribs spend in the microwave, Bubba starts with his history; Bubba played in the NFL for 13 years, which was his job. However, barbecue is his passion – sadly, he married a woman that doesn’t like ribs because they’re too messy.

So, Bubba vowed to find a way for his wife to be able to enjoy ribs without the mess associated with it. The best way to make ribs less messy? Take the bones out. After nearly 20 years of searching, Bubba found the proper way to remove the bone from the ribs, and they debone an actual slab of ribs, leaving the meat intact so everyone can enjoy ribs with a knife and fork. The deboned baby back rib-steak isn’t just pieces of meat associated in the shape of a rib, they are actual ribs, and boneless meats are the way of the future.

The microwave dings complete, and Britney hands out samples while the Sharks ask the immediate important questions. Mark asks who Bubba played for, and Bubba says that he started with the Detroit Lions and was Rookie of the Year in 1978, then he moved to the-then Saint Louis Cardinals, then came back to Cleveland, Ohio to play for the Browns until he retired in 1990. All the Sharks have been digging into their ribs, and mention how delicious the ribs are. Robert is shocked that you can simply microwave the package of ribs and it’ll taste just like the ribs from his restaurant. 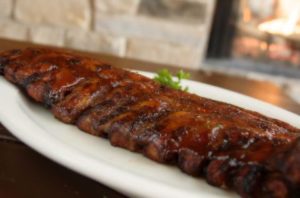 Daymond points out that when some people go to restaurants and order steaks with the bone in, the bone actually makes the meat taste better; while this is a great point, Bubba’s technique actually cooks the product with the bone-in, then the bone is removed and the product is chilled quickly and ready to be packed and sold. Kevin asks if there is anything proprietary about the bone remover, and Bubba steps behind the monitor and pulls out the patent for a de-boned rib, and a patent for the process of de-boning the ribs. Bubba essentially owns everything to do with removing the bone from ribs using his technique.

Bubba said that you cannot cook ribs fully without leaving some of the bones in there, and that is what he has invented. Robert is curious about the process and tries to probe for details, but Bubba fires back with a famous line, “If I tell you, I gotta kill you.” It took Bubba 20 years to learn how to debone the rib, so he is keeping completely shut on the matter. Kevin then reveals that in the history of Shark Tank, he has never seen somebody with a patent on a food product.

Robert then asks about the sales of the De-Boned Baby Back Rib Steak, and Bubba answers that sales total $154,000 over a year’s time, and are selling in 48 stores so far. Barb points out that it took Bubba 19 years to get to the point where he was finally making sales, and questions what happened during those other 19 years – Bubba explains that he “quit,” and the reason that Britney and Bubba are actually full-fledged partners is because there was an incident between them. Britney would run track and field, and at a meet, Bubba was pushing her like a father, and Britney explained that she no longer wanted to run track. Bubba said no, but Britney pointed out that Bubba had quit on his De-Boned Baby Back Rib Steak products, which invigorated Bubba to get back into the game and keep up the hustle and grind.

Kevin then says he is an investor in a restaurant chain that has 450 stores that “sells a lot of protein” and their second-best selling product is indeed ribs. The big problem with Bubba’s deal is the $2 million valuation despite low sales, and the only value is in the patent. This reminds Kevin of a story from the first season of Shark Tank, where a guy stood in the Shark Tank with a guitar that featured a folding neck. The man wanted to build a guitar company with his folding neck technology, and they are currently licensing that technology to Fender guitars all over the world. The more interesting portion of the deal is the patent on the process, and the proper thing to do would be to license the patent to manufacturers of protein. Kevin would take De-Boned Baby Back Rib Steak to one person and one person only.

Kevin then extends an offer, which is contingent that this one person Kevin would take Bubba and his De-Boned Baby Back Rib Steak to, who is one of the largest meat processors of the United States. However, Kevin wants 49% of the company, in exchange for the full $300,000 that Bubba is asking for. All of the Sharks concede that Kevin’s deal actually makes sense and it isn’t such a bloodthirsty, cut-throat offer that Kevin is typically known for.

However, Daymond makes the exact same offer, but for 30% instead of 49%. He calls Kevin a “greedy savage” with a horrible deal, and he wants to be part of something that he can be passionate about since he loves ribs. Robert steps in and offers his input, saying that Bubba is paying a lot of money for a phone call that he could essentially make on his own, and is the first Shark out of the deal. 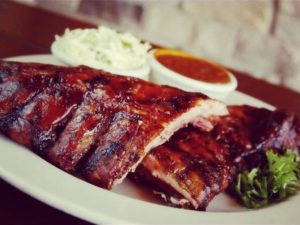 Barbara speaks next, saying that she could move the product into some big box stores, like warehouse stores in the vein of Costco, Sam’s Club, and B.J.’s, but the offers on the table from Kevin and Daymond are far more realistic than what she could do. Barbara steps out of the deal as well. Mark also agrees with Barbara, saying that the business is too small and that the real interest as an investor would be in the licensing play since he is looking to make money and not to get overly attached to the product, so Mark is out as well.

Just Kevin and Daymond remain, which are the licensing deals that could make Bubba a lot of money for just sitting back and relaxing. Bubba takes a moment to think about the deal, and while he appreciates Kevin’s offer, Bubba accepts Daymond’s offer of a $300,000 cash investment in exchange for 30% of the business but is contingent on Bubba receiving the licensing deal with whoever Daymond intends to license out to.

Bubba and Daymond’s deal worked out, and Bubba was able to score the deal with Daymond and find himself a licensing deal. Now, Bubba’s De-Boned Baby Back Rib Steak can be purchased at a variety stores, but most of which are located close to Ohio. Bubba’s de-boned ribs can be purchased in retailers like Costco, Sam’s Club, and Ohio-native Heinen’s, and also ordered online. Sales jumped from just a few hundred thousand to over $3 million after Bubba’s appearance on Shark Tank, and sales continue to grow strong.

Bubba still owns and operates his restaurant in Avon, Ohio (the same hometown of famous Michael Symon), but is rarely ever present. Due to his partnering with Daymond, Bubba has made appearances on the Home Shopping Network and Hallmark Channel to sell his ribs, and Bubba’s De-Boned Baby Back Rib Steak can be found in an increasing number of stores all over the United States.

As someone who is also from Avon, Ohio, and a huge fan of Bubba’s Q, I sincerely hope Bubba brings more of his other products worldwide. Bubba also has a specific method of making chicken wings, where he actually triple breads it – it is my sincere hope that Bubba becomes a household name, associated with some absolutely delicious soul food.