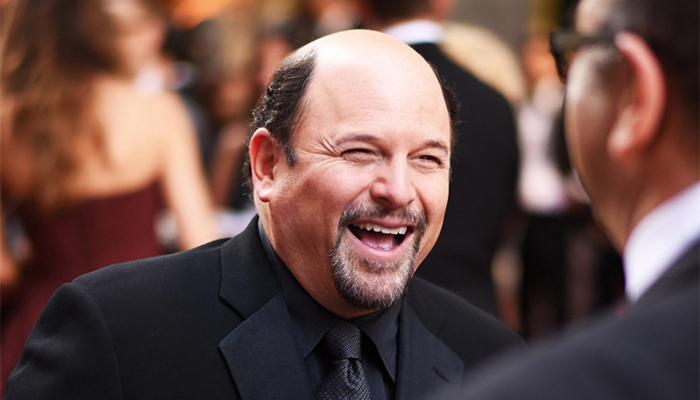 Jason Scott Greenspan, better known by his stage name, Jason Alexander, is an American actor known for his role in the sitcom, Seinfeld. As an actor, Alexander first debuted in the show biz industry during the 1980s in a television film titled, Senior Trip which was released in 1981. Some of his other earlier works on the small screen include the sitcom E/R (1985), the crime drama Rockabye (1986) and the sitcom Everything’s Relative (1987). During that time, Alexander also appeared in a handful of roles on the big screen, including the films The Burning (1981), The Mosquito Coast (1986), and Brighton Beach Memoirs (1986). Despite having received mostly minor roles during the 1980s, Alexander eventually landed greater roles during the 90’s as his fame as an actor grew with experience.

During the ’90s, the actor took part in numerous television and film projects; with the film Pretty Woman in 1990, being one of his more notable works at the time. Alexander also appeared in the Broadway musical production, Jerome Robbins’ Broadway in 1989. With his fame as a performing actor rising, he was eventually offered the role of George Costanza, in the American sitcom, Seinfeldーit would ultimately be one of his greatest works as an actor to date. For his portrayal of George in the series, Alexander received countless awards and nominations throughout his career.

Besides being an accomplished actor on the screen, Alexander has also done work as a comedian, director and voice artist. No stranger to stand-up comedy, he has fronted his very own Jason Alexander’s Comedy Spectacular routine from 2008-2009 and has since garnered a large amount of fans as a comedian. The actor has also directed various musicals and has been involved in many movies doing voice over work.

But what has this multitalented man been up to recently? What happened to Jason Alexander? Where is he now in 2018? 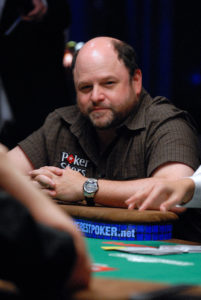 Born on September 23, 1959 in Newark, New Jersey, Jay Scott Greenspan “Jason Alexander” is the son of Ruth Minnie,  nurse and Alexander B. Greenspan, who worked as an accounting manager. He has two siblings and as a young boy growing up in Livingston, New Jersey, Alexander had always had an eye for the stage. Eventually he got his parents into signing him up for voice lessons for the purposes of “training for his bar mitzvah”.

Even as a grade schooler, he had always been involved with acting through his school’s plays. Alexander attended Livingston High School, from which he graduated later in 1977. The actor first adopted his stage name of “Jason Alexander” when he was still a student, at the age of 15. After graduating from high school, Alexander attended the School of Fine Arts at Boston University under a full scholarship. During his time at the university, Alexander had interests in pursuing classical acting; however he would later avert to the comedy genre instead, after having received encouragement from a professor. Despite the change in studies, he would ultimately drop out of university for an opportunity to appear on the small screen. 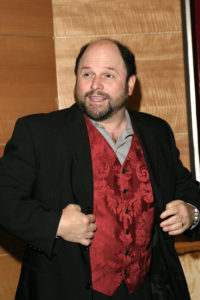 Having moved to New York in order to pursue a professional acting career, Alexander eventually landed a role in the “B” film, The Burning in 1981. He also subsequently appeared in Senior Trip, a television film in which he played the roll of Pete. Later that same year, he starred in the Broadway production of the musical, Merrily We Roll Along. While his roles were minor at the time, they ultimately offered him a large step into the doors of show business as a growing actor.

Throughout the 1980s, Alexander appeared in numerous television series and films including the American sitcom E/R (1985), Everything’s Relative (1987), The Mosquito Coast (1986) and Brighton Beach Memoirs (1986). However as a performer, he did not receive wide critical acclaim until he landed a role in the stage play, Jerome Robbins’ Broadway in 1989ーit would be one of his proudest moments from his early career. That year, Alexander would win the 1989 Tony Award for Best Actor in a Musical for his involvement in the production. 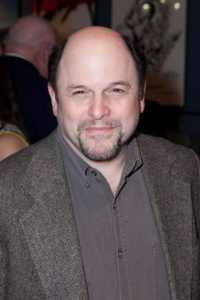 Following his successful performance in the musical, Alexander later landed a role in the (to-be) award winning television sitcom, Seinfeld that same year. In it, the actor plays the role of George Constanza, the best friend of the series’ protagonist, Jerry. Having first debuted on television on July 5, 1989, the show centred around the daily lives of a close group of friends. Seinfeld was an immediate hit after its release and garnered many positive reviews from criticsーthe series would also be named “The Second Best Written TV Series of All Time” in 2013 by the Writers Guild of America.

Throughout its run during the mid 1990s, Seinfeld won a plethora of awards and nominations and the series eventually ended in 1998 after a 9 year run.

Jason Alexander and His Career After Seinfeld 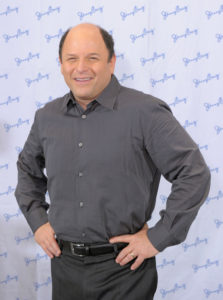 Following the end of Seinfeld, Alexander starred on the small screen once again in 2000 in the comedy series, Curb Your Enthusiasm. Appearing on the show as himself in an early cameo, he later appeared in the series’ seventh season, alongside a few of his fellow cast members from Seinfeld. The actor also made an appearance in the ABC sitcom, Dinosaurs, playing the role of Al “Sexual” Harris, a character who often engaged in sexual harassment. However despite Alexander’s many subsequent roles in film and television, the truth stood that it would be difficult from him to land a role in a series in the same caliber as Seinfeld.

In 2004, Alexander was cast in a leading role in the American sitcom, Listen Up! Based loosely on the life of popular sports personality, Tony Kornheiser, the series focused on protagonist, Tony Kleinman who was the host of a TV show called “Listen Up!”. The show first debuted on CBS on September 20, 2004 and garnered over 11.8 million viewers during its debut episode. While the series was met with decent ratings, it was eventually cancelled by the network on May 18, 2005 due to “rising production costs”.

After the cancellation of the series, Alexander appeared in a multitude of television dramas but often times only starred in one or two episodes as a guest actor. Such shows include, Monk (2005), Odd Job Jack (2006), Everybody Hates Chris (2006) and Fish Hooks (2010), to name a few. Finding it difficult to land a major role, the actor turned his attention to films and movies. In 2006, he provided the voice of the Penguin on Belly in the direct to video parody Farce of the Penguins and later starred in multiple other movies that year including Ira and Abby, Hood of Horror and How to Go Out on a Date in Queens. Alexander has also starred in the popular film, Hachi: A Dog’s Tale as Carl, alongside stars Richard Gere, Joan Allen and Sarah Roemer.

Jason Alexander as a Comedian 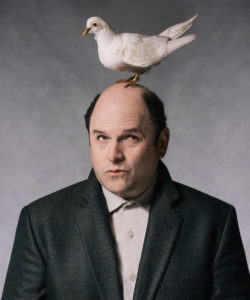 In 2008, Alexander launched his very own stand-up comedy show, the Jason Alexander’s Comedy Spectacular in Australia after having worked on the LOL Sudbury Comedy Show earlier in Canada. As a musician, the actor/comedian was also known to have incorporated his musical talents into his stand-up and improv routines. Having garnered himself a large fan base, he is currently backed up by a handful of well known Australian comedians.

A few years later in 2014, Alexander once again took to the stage for a one man improv show titled An Evening with Jason Alexander & His Hair. He has since performed the hilarious routine at various venues across the globe, from Las Vegas to Australia. 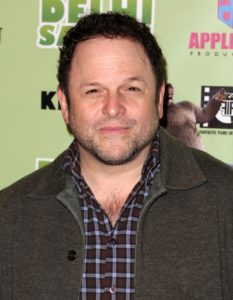 The actor has appeared in a number of roles this year, including the comedy series The Grinder. In it, Alexander plays the role of recurring character, Cliff Bemisーthe creator for the television show in which the protagonists of the series are in. The comedy was first broadcast on television on September 29, 2015; its first season ran for 22 episodes and ended on May 10, 2016. However despite having received generally positive reviews from critics, The Grinder was ultimately cancelled by Fox a week after the air of its final episode.

In addition to starring on the small screen in TV dramas, the actor has also been continuing with his work as a voice actor in various animated series. One such series include TripTankーan animated series which is known for featuring various sketch styles throughout the episodes, in which he voices the character Phil. But that’s not allーAlexander has also lent his voice to Mr. Bibb/The Nome King in the most recent Tom & Jerry animated film, Tom and Jerry: Back to Oz.

Besides acting, Alexander has also appeared a variety of documentaries this year as himself; one being the fan funded, For the Love of Spock. First posted onto Kickstarter in 2015, the documentary will act as a tribute to Mr. Spock from the Star Trek series and also act as a celebration of the original show’s 50th anniversary. Having reached its funding goal of $600,000 with the help of over 9000 backers in June 2015, the project has now been under works with a planned world wide release later in September of this year.

The actor has also been involved in the second and third instalments of the Broadway film trilogy by Rick McKayーwith the former, titled Broadway: Beyond the Golden Age, having first debuted in film festivals earlier this year, will be released in theatres later this fall. With the second instalment of the trilogy finished and awaiting release, Alexander has currently been busy with the filming of the third instalmentーBroadway: The Next Generation. It is currently scheduled for a 2018 release.

If you’d like to stay connected with Alexander, you can find him on Twitter under the handle @IJasonAlexander.