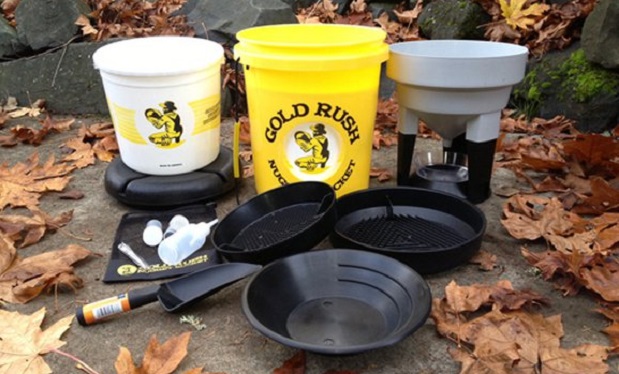 Mark Peterson is from Eugene, Oregon, and his company is the Gold Rush Nugget Bucket. He is seeking an investment of $60,000 in exchange for 15% of his company. Gold – everyone wants it. Wars have been fought over it, and it literally makes the social world go round. It used to be that you needed to spend hours panning through dirt in the river to find a gold nugget – too much work and not enough fun. So, Mark has made it easy and fun for everyone to find gold, including golds. The Gold Rush Nugget Bucket is not your typical panning process, as the bucket focuses the soil into a point which makes the panning process super easy and fun.

Mark demonstrates by scooping in dirt and water, and then the gravity simply takes over as the funnel filters out the dirt and water. The longer you do this, the more gold will concentrate in the bowl – when finished, simply remove the bowl, dump the contents into a pan, and now you are ready to pan super concentrated dirt. Lori is the first to ask how Mark came up with the idea, and Mark explains that he took both of his daughters down to the river to find some rocks for their rock polisher. They ended up taking a 5 gallon bucket and some screens, stacked everything on top, and his daughters played for a few hours scooping dirt or water, so Mark knew he was something out.

Unfortunately, Kevin says, most of the easy panning locations were dug up decades ago, so a person would have to wade out far in the river in order to find any gold now. However, Mark explains that the typical person can maybe find gold in Home Depot sand. Barb is blown away, asking if Home Depot knows about this, and Mark explains that the sand does not have enough to cover the cost of the bag of sand. This type of gold is actually called “Micron Gold,” and he pulls up a screen that shows the amount of gold that has shown up through various panning. There is only a trace amount of dust forming a ring inside the bucket, but the gold is fine enough that it will float on a surface of water. 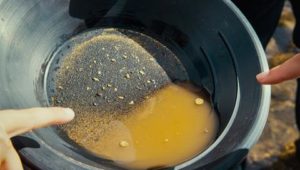 Mark also has a patent on his process, controlling the process that allows a funnel to filter out water and dirt or sand. The layer of sand is naturally created, hits the bottom of the bowl, then spreads out, forming the ring of gold. Mark Cuban asks about sales, and Mark Peterson prefaces that his sales are online only, but he has done $290,000 in sales in the first 17 months. Each unit sells for $99.95 plus shipping and handling, and each sale is about 70% profit. Robert points out that people are buying the product for their kids, and Mark confirms that this is not a toy but a learning tool, and 50% of their purchases are actually confirmed as gifts. Mark Peterson has invested $192,000 of his own money, which changes the tone of the Shark Tank.

Barb asks how he could spent $192,000 of his own money when the profit margins are so high, while Mark Cuban jokes that he had to buy a lot of buckets and screens. The mould, actually, cost $150,000 for the entire process. The unique parts of the Gold Rush Nugget Bucket are the funnel, the two screens, the bowl, and the base – Mark actually has two issued patents in the United States. Mark Cuban loves the idea and thinks it is cute and fun, but ultimately, this is not the type of gold he thinks that people pan for on a daily basis, and is the first Shark to exit out of the deal.

Robert also thinks the idea is cute, but he ultimately sees it as a hobby, so he is also out. Barb speaks next, mentioning that the clever little gift is wholesome and can teach a lot of kids. Unfortunately, she is a customer and not an investor, so Barb is also out of the deal. Kevin asks if Mark has any aspirations to bring the product into retail, such as at a Dick’s Sporting Goods, but Mark feels that he does have a bigger market. He submitted the product to Bass Pro Shops, a fishing store, but has not heard anything in return. 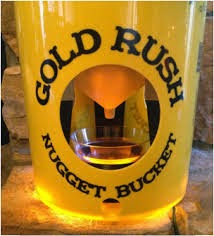 Kevin tells a story of one of his neighbors, who is into gold panning – this neighbor goes out into the lake with a pan and pans for gold, and Kevin thinks he is nuts, but every once in awhile, the neighbor does find gold and screams about it. Mark points out that the journey is not in selling the gold, but actually finding the gold. Lori finds the idea adorable, but ultimately it is a kid’s toy and it is something that could be fun, but since she sees it as a toy and not a $99 item aimed towards adults, she is out of the deal.

Robert jokes about putting Kevin’s face on the face of the gold panner on the logo for the Gold Rush Nugget Bucket, but Mark Peterson replies that it would no longer be a kid’s toy. Robert points out the longer Mark stands there, the more he likes him. Kevin speaks next, saying that he finds the idea so frivolous, silly, and mindless, but it actually has merit. Kevin extends an offer of $60,000 in exchange for 50% of the company.

However, Robert feels that Mark will sell a lot of the units, but he is not blinded by the gold and greed. Robert extends an offer of $60,000 in exchange for 25% of the company, and Mark Cuban urges the other Mark to take the deal. Mark Peterson asks Robert what his vision is for making the both of them a lot of money, and Robert smiles and asks if he is joking. Kevin interrupts, saying that Robert will take thousands of the buckets into Texas and start panning for gold himself using the Gold Rush Nugget Buckets.

The entire Shark Tank devolves into light hearted, good-natured chaos as Robert runs up and grabs a bucket and begins to pass them out to each Shark and asks for them to join him in panning for gold. However, Robert returns to being serious, and finds that people will purchase the product – it’s more like a gag gift, however, but this is the most Robert would see into it. Mark Peterson thinks for a moment, and takes the clearly better offer, finding himself a partner in Robert Herjavec. The producing team of the Shark Tank actually takes a second to put up an image of Kevin’s smiling mug in the Gold Rush Nugget Bucket logo, and it appears that this entire segment was a light hearted and good-natured segment of the Shark Tank, which rarely seems to happen.

This is one of the better Shark Tank stories that will make you feel good, unlike the misfortunes of something like Rolodoc or a product that falls short like the BufferBit. The Gold Rush Nugget Bucket is an incredibly simple product that is impossible to mess up, so it was heart-warming to find that the Amazon reviews came out to an incredibly strong 4.5 stars over 47 different customer reviews. The Gold Rush Nugget Bucket is available for $119.95, although there are only 3 left in stock. Robert and Mark appeared to have expanded to a Deluxe edition as well, which includes a metal folding pan that can be used to pan out the contents of the bucket for any potential gold contents.