Milk and Brookies Update – What Happened After Shark Tank

Milk and Brookies Before Shark Tank

Stepping into the Shark Tank is a trio of people, all from Los Angeles California. Jovon English, Naima Harris, and Marcus Brookes all represent Milk and Brookies, and they have come to the Shark Tank to seek an investment of $100,000 in exchange for 20% equity in their company. In New York, there is the Cronut; San Francisco has the croissant, but what does Los Angeles have? Now, Los Angeles has the “brookie.” Brookies are brownie/cookie mash-ups, which is what you would get if a brownie met a cookie, put a ring on it, then had a little delicious baby.

Milk and Brookies on Shark Tank 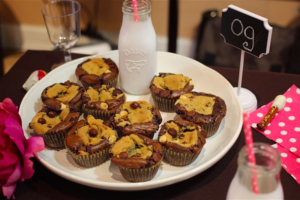 Marcus then passes out samples to each Shark while Barbara remarks the punctuality of the sales pitch – no false pitches or selling the Sharks that the product is something it is not. Robert remarks, “It’s Brookie time!” and is amazed that Marcus is passing out a tall, cool glass of milk to go with each Brookie. All of the Sharks have a hungry grin on their face. Lori attempts to hand a glass of milk to Barb, but the women point out that each Shark gets their own tall glass.

Robert asks what the O.G. consists of, which Jovon explains consists of chocolate fudge brownie mixed with a chocolate chip cookie with three types of chips. Everything needs to be eaten in one bite to get the full chocolatey experience, Jovon explains. Robert then turns to a “blondie” cupcake next, which is a snickerdoodle cookie. A lot of people had an aversion to chocolate, so they made a blondie. The blondie is white chocolate chip, butterscotch and peach all mixed together. All of the Sharks love the taste of the Milk and Brookies, and Kevin remarks that the flavor is really good.

All of the Sharks love the taste, but Kevin guesses that each Brookie is around 400 to 500 calories. Lori and Barb beg for the trio to not tell them, but Kevin and Robert explain why they need to know. Jovon explains that they are sending their products off for testing for calories, so they do not have an accurate number yet. Kevin then asks about the sales of the Milk and Brookies – how are they primarily sold? Jovon explains that they are sold through the internet, e-commerce, since that is how they would like to operate.

Lori then asks about the relationship among the trio and Marcus says that Jovon is his best friend, and Jovon and Naima are “sister-friends” and also roommates. Barbara asked how the trio came to the idea of making cupcakes, and Jovon explains that she initially made Brookies to bring to a holiday party. Everyone wanted Jovon to make more and buy them. Jovon initially had the goal of just paying off the cable bill, but then they decided to pay the rent with their Brookies and continued to move on. Mark points out that necessity is the mother of invention. Lori then asks about the background of each of the trio. 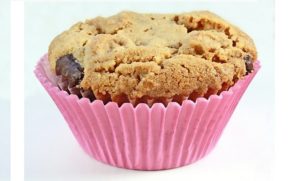 Jovon explains that she comes from a private banking background, and has had a relationship with banking for over 15 years. Kevin says that is his world, but ultimately, Jovon exited the banking world in order to pursue more creative and delicious passions. Now, Jovon works with a non-profit organization that supports the homeless and mentally ill that are suffering through some form of incarceration. Kevin is shocked that Jovon is not full-time in Milk and Brookies, then asks which one of them works full-time on the project. Naima works in healthcare, while Marcus works in property management.

Robert clarifies that the three of them are doing it whenever they have time, but Jovon explains that they have to make time to do it – they typically operate on naps. Kevin then says that Wicked Good Cupcakes was one of his deals, and as they grew, the team began to work 18 hours a day. Barbara agrees with Kevin, explaining that the team has to work 18 hours a day with only two partners. Jovon then explains that they collect the order, which must be received by 7 PM Pacific Standard time. They can then ship them or have them delivered the following day, meaning everything is baked to-order.

Lori is shocked that the trio goes into a kitchen and actually stirs the mixture to create Milk and Brookies. Kevin then explains that the scaling of the business would be impossible due to the possibility of 750 combinations of a Brookie. Robert asks for the sales number, and Jovon explains that so far, they have sold $14,000 worth of Brookies. Kevin says that in the cupcake and confectionary world of business, the only way to survive scale is to standardize around four products. There is no other way since they have to manage around inventorial expectation since they are shipping fresh. They cannot possibly do 750 options – this is the definition of Hell in “cupcake-land.”

Barbara then asks how much a six-pack of Brookies are sold for. Without nuts, they are sold for $14, but with nuts, they are sold for $17. An individual Brookie without nuts costs $.75 to make, and a Brookie with nuts costs $.91 to make. Mark then clarifies about the price, which is indeed $14 for 6 prior to shipping, then explains that the trio is not charging nearly enough to justify the price. If they look at the cupcake business, Kevin explains, they need to sell 6 at a time. They need to make around $20 on each sale, but Mark says that they would need to make far more for the Brookies. 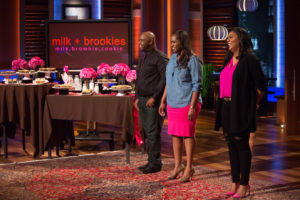 What they offer now is a unique, customized service – the product is amazing and Marcus is the most fortunate product tester in the world. The reality is, Brookies are made with love and time, so it should cost $9.95 each, but Barbara thinks they should be $30 for 6 Brookies. Even though their sales, in terms of number of units, might fall, the profit margin is ultimately going to go up. The biggest limit is their time, so they do not need the most number of customers in the world, but they need to maximize their return on their time. Until they do that, they are ultimately a bake sale and not a business, so Mark is the first Shark out.

Kevin then says that each Shark is forming their business plan for them, but ultimately they are a baking club. There is no CEO, no employees, and this appears to be a hobby. They are not a business and Kevin knows since he is in the confectionary business, but for now, Kevin is not interested in investing. Kevin is out of the deal.

Robert asks the trio a question about something they had said earlier; is there a dance team for Milk and Brookies? Jovon explains that while they cook Milk and Brookies, they are dancing and having a good time and Marcus is the one who is the leader of that. They love to listen to Beyonce, which Marcus begins to dance to. Robert explains that all five of the Sharks love the product, and when products show up on Shark Tank (especially food products that the Sharks love), things blow up. Robert is confident that the trio will make a lot of money, but they are unfortunately a little early. Robert is saying no to the Brookie, but is saying “call me” to the dance team. Robert is the third Shark out.

Barb explains that she loves the infectious personality of the trio, since one strong personality can make the business. There are no clunkers here (sometimes on Shark Tank, there is one good personality and two “clunkers), and they are tripping over each other with personality – you just want to join their party. Unfortunately, they are just like DaisyCakes on Shark Tank who made all the wrong mistakes. The website crashed, she lost over $350,000 in sales in a night, and it was a heartbreaker. She was baking $112,000 worth of cakes when she appeared on Shark Tank, and the trio has only $14,000 in sales. It is too early, so Barbara is the fourth Shark out.

Only Lori remains, and explains that she sees it that they are trying to grow into a forest, but right now they are a little acorn. Like the other Sharks, she agrees that the trio is just a little too early to invest into, so Lori is the final Shark out of the deal.

Unfortunately, the trio behind Milk and Brookies does not find an investment in their business, but they boogie a little bit before leaving the Shark Tank.

Milk and Brookies Now in 2018- The After Shark Tank Update

Like a lot of delicious entrepreneurial businesses on Shark Tank, Milk and Brookies immediately took off and began to sell a ton of units following the airing of their episode – numbers were estimated at about 3,000% growth overnight. Now, Milk and Brookies has refined their product into just six different types of brookies – the O.G., Blondie, Turtle, Peanut Butter, Snickerdoodle, and Sugar. The prices for a pack of brookies have also jumped skyhigh, as a 4-pack of Brookies now costs $24.00 before tax and shipping are included. Still, Milk and Brookies has partnered exclusively with Orleans and York, which are a delicatessen store available primarily on the west coast.

While Milk and Brookies might seem delicious, their price is a tad outrageous and they require 7 to 10 days for shipping. I do not know how I would feel about receiving a cupcake that has been travelling across the country for 7 to 10 business days, but evidently, the business model appears to be self-sustaining.