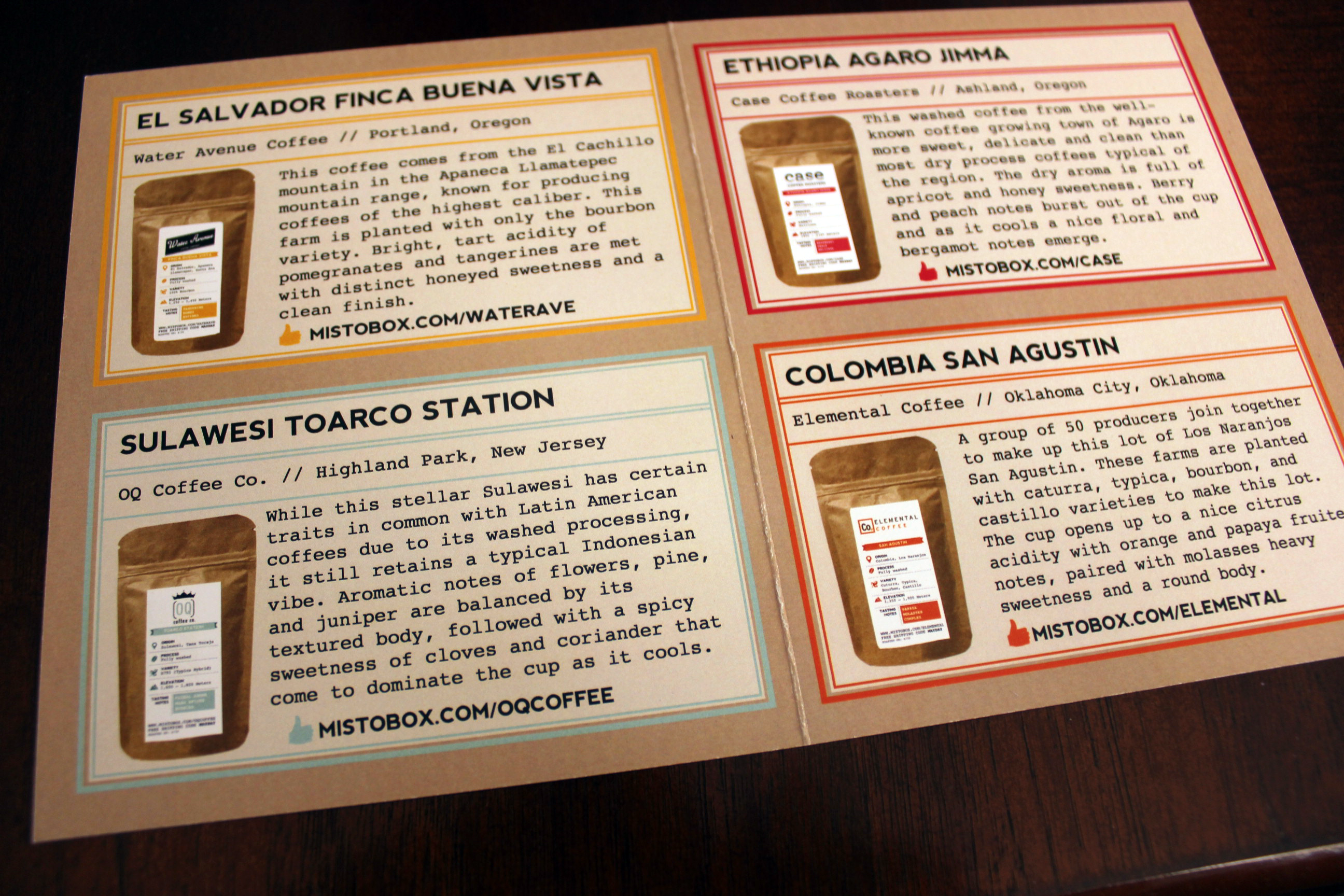 Samantha and Connor started their coffee subscription service as a college project, and it grew in Misto Box. Before appearing on Shark Tank, the co-founders launched a successful Kickstarter campaign where they doubled their asking amount. Would they be so lucky on the Tank? 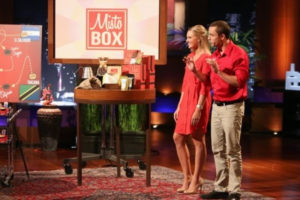 Samantha Meis and Conner Reilly entered the Tank dressed all in red, with the logo for Misto Box proudly displayed on the lapel. They told the Sharks that they were seeking $75,000 in exchange for a 15% equity stake in the company. Samantha asserted that Misto Box was changing the way that people find out about different kinds of coffee. She told them that coffee has never been more popular than it is today, with over 400,000,000 cups of the black liquid consumed daily in the USA. Samantha credited the boom in coffee sales to independent coffee shops, which seemed like a bit of a stretch considering how popular big chains such as Starbucks and Dunkin Donuts are. She said that people enjoy finding new exciting flavors, but have trouble purchasing such delicacies for their Keurig’s and coffee pots.

The pair then targeted Lori, who lives in Chicago. They said that it’s possible that her “perfect cup of coffee” is grown in Ethiopia, and roasted in the states, and she has no way of discovering it. Samantha told the Sharks that the Misto Box is a subscription service that sends a different selection of artisan coffee to the customer’s door on a monthly basis. The subscription box customer receives small sample sizes of coffees that Samantha and Connor pick out, and if they Like it, they can purchase the full-size bag on their site. Samantha noted that they offer free shipping. Samantha began passing out coffee samples to the Sharks.

Lori wanted to clarify what exactly the service was, asking if it was a brewery or a wine box. Samantha and Connor confirmed that it was. Kevin asked what it would cost to retain a customer from the beginning, someone who had never heard of them before. Samantha told him that it only costs about $4.60. Kevin expressed his surprise that they knew the exact number, and told them that they got bonus points for impressing him. Mark Cuban asked them where they were from, and Connor answered that they were from Arizona. Mark pressed them on how they had gotten into the business in the first place. Samantha told them that they had met at the University of Arizona. They started the business with the help of a program at the college that assists new entrepreneurs. Kevin asked them if they were dating, and the two denied that they were, or that they ever had.

Robert asked them where he would hear about them, and where they were targeting. Samantha told them that they were targeting two main communities: the coffee community and the foodie community. She went on to explain that people who consider themselves “foodies” wanted to learn more about coffee, and thus were very receptive to hearing more about the Misto Box. Samantha said that they were targeting bloggers and online publications for their marketing. Robert asked them what the next step was after he discovered them. Connor stated that there were three different kinds of subscription boxes available on the site. Robert asked what the price range was, and Connor answered that the prices range from $15 for a monthly subscription, $14 a month for a six-month subscription, and $12.50 a month for a year-long subscription.

Robert asked them how the charging process works. Connor stated that if you pay for a year-long subscription, you pay $150 up front, and then get charged again when the financial period runs out. Robert asked what the margin was on the $150 for the year. Connor said the margin was between 35% and 40%. He stated that they had a deal with the coffee roasters, where they got the coffee at a steep discount or for free. This confused the Sharks, and they demanded to know how Misto Box obtained the sample coffee for free. Samantha said that there was a benefit for the coffee roasters as well. They were getting their coffee in front of a bunch of people who were interested in their product. Robert clarified for the group, saying it was good for coffee roasters who had difficulty in getting their coffee out there. They could use the Misto Box as a distribution point, and gain potential customers.

Kevin asked if there comes a point where people don’t want the Misto Box anymore, but they just want their favorite coffee. What would Misto Box do then? Samantha informed him that they were happy as long as they retained that customer. They have no qualms about sending the customer their favorite coffee on a recurring schedule of their choice. Lori clarified that it was an auto delivery at that point. Connor said that you could switch the time period at any time, from weekly to monthly, or vise-versa.

Kevin asked them what their conversion rate was, and Connor answered that it was about 15% of the customers that go back online to order their favorites. Samantha said that they have two revenue streams. One is from the subscriptions, and one from the individual bags of coffee being sold. Lori asked them how long they have been in business, and wanted to know how much they’ve done in sales to date. Connor said they’ve been in operation for about four months, and they went from 0 to 700 customers. They brought a sales chart with them, and it showed a sharp spike in the last month or so.

Robert clarified that the 700 customers were on some subscription plan, and Conner confirmed that they were. Robert went on to ask how much they have invested the business so far. Connor said that they had a Kickstarter campaign where they raised $9,000, and then each of them spent $6,000 of their money. Kevin looked surprised and asked them if that was it. The pair confirmed that it was. They said that they did it all themselves, from sourcing the coffee to packing and shipping the product.

Kevin asked them what they planned on doing with the $75,000. Connor told him that they planned on using it to grow, and get a bigger space. They told the Sharks that they were working out of Samantha’s small apartment. Connor said they also were looking to hire an employee or two to help out. Kevin stated that the business was a crap shoot, but he made them an offer of $75,000 for 25%. This seemed like an excellent deal to me considering how little experience the pair had at business. They considered it for a few seconds before Samantha asked if there were any other offers. Kevin sighed and shuffled back in his seat.

Kevin said that he had invested in subscription services before, and some went on to be successful, while others were run into the ground by idiots. He was unsure of which kind the pair were. Samantha and Connor insisted that they were not idiots. Lori laughed. Robert told them that he liked their business because coffee is the number one drug in the world. Robert said he was the wrong partner because he did not see the long-term potential of the business. He was the first to go out. Was the next, stating that she does not drink coffee.

Daymond said that he was out because he wasn’t a coffee drinker either, and he did not like the subscription box model. He was the next to go out. Samantha appealed to Mark Cuban, stating that he seemed to be knowledgeable about SEO as well as the subscription model. She said that she thought he would make a good third partner. Mark stated that he isn’t all the way there yet. Samantha wondered what she could do to get him there, but Daymond warned her that she could lose both him and Kevin, who did want to invest in Misto Box. Kevin told them that he was happy to retract his offer if they were sure that they wanted Mark as an investor. Samantha begged him not to retract just yet. He said he would give them 30 seconds, which would add some drama to their lives.

Mark told them that if they wanted a deal with him, they would need to offer more equity. Kevin told them they had 20 seconds left. Samantha asked for a standstill while they talked it out, but Kevin told them they only had 15 seconds left. Connor whispered something in Samantha’s ear, and she again appealed to Mark. She asked how much more, and Connor asked him if he would do it for 30% equity. Mark considered, and said it was a deal. Samantha apologized to Kevin, while Mark got up and hugged the pair. As Samantha thanked everyone, Kevin told her that they should primarily be thanking him for holding Mark’s feet to the fire. In the exit interview, Connor explained their choice. He told America that Samantha had a crush on Mark and that he liked sports. It seemed like an unusual method of doing business.

Misto Box in 2018 – The After Shark Tank Update 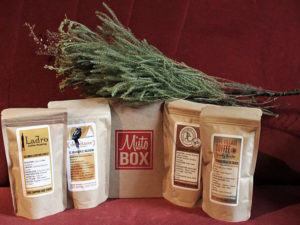 The website for Misto Box is alive and well. Since the company was on Shark Tank, they’ve dissolved their office in Phoenix, hired a team of people, and started to work remotely. Samantha lives and works in Greece, while Connor is based out of San Francisco. They have stopped filling all of their order’s out of Samantha’s small apartment, opting to outsource it to a Chicago company. Misto Box recently celebrated four years in operation, and they are still going strong. According to a blog update, they are working on streamlining the customer experience through the website.