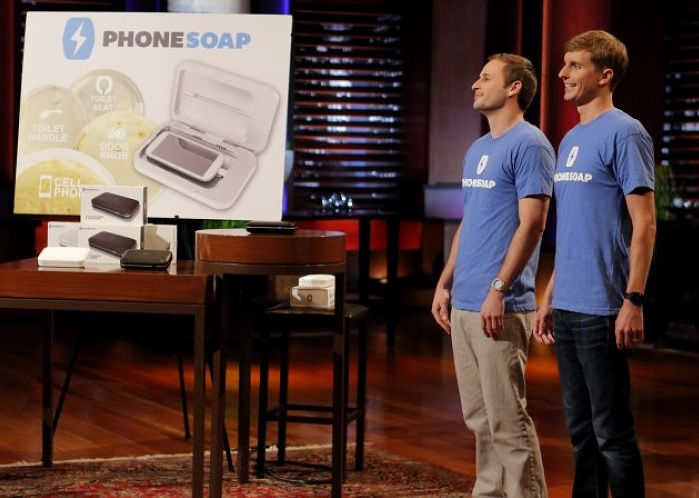 PhoneSoap inventor Wes La Porte, and his cousin and business partner Dan Barnes are a pair of clean-cut young guys from Provo, Utah. They’re the sort of nice fellows that would never make a dirty business deal, in fact the pair of entrepreneurs have produced an innovative product that aims to clean up the World, one device at a time.

Dan was horrified one day when he read an article about the amount of bacteria on the average cell phone. It’s a little known fact that most phones are crawling with 18 times the amount of harmful bacteria that can be found in the average public rest-room, but as soon as Dan heard that nugget of information he was instantly skeptical.

Wes was working in a lab at the time, and Dan enlisted his help to see if his own phone was really that disgustingly germ-ridden. Wes was equally doubtful of the claim, but after testing Dan’s phone, and his own, he was shocked to learn that both of their cells were completely covered in harmful bacteria. He embarked on a series of tests on other peoples phones, and the truth was even more unsettling

The pair learned that at least one in six phones actually had fecal matter on their surfaces, and the potential health hazards were completely unknown by the general public. The pair resolved to develop a product that would completely sanitize phones, using Ultra Violet light technology that Wes was familiar with, as it was used to sanitize objects in the lab. They designed a prototype sanitizer that had the dual benefit of being able to charge any phone as it sanitized it. 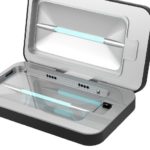 They launched a Kickstarter campaign in May 2012, hoping to raise $18,000 to develop a working prototype of their design. The campaign was a great success, one month later 1,200 backers had pledged over $63,000, and the entrepreneurs began the expensive and lengthy process of completing their prototype.

In early 2014 the duo finally began selling the PhoneSoap sanitizer online, and interest grew quickly. Dan specialized in online promotion and the entrepreneurs spent a considerable amount of money on targeted marketing. The company was a success, but both Dan and Wes wanted to achieve additional funding, and a strategic shark partner to help the business grow more quickly. After an open casting session for Shark Tank, they were accepted to appear on the show, in early 2015.

Dan and Wes entered the tank hoping to achieve an investment of $300,000, in exchange for 7.5% equity in the PhoneSoap business. Dan began the pitch by explaining to the Sharks just how dirty their phones were. He revealed to the disgusted looking moguls that most phones were 18 times dirtier than public rest-rooms. Wes revealed that he had tested the facts for himself, and he had been horrified at the results. Dan explained that PhoneSoap could clean 99.999% of bacteria in just five minutes, using UV light to sanitize a device thoroughly.

Mark Cuban suggested that a standard sanitizing liquid would work just as effectively, but Dan informed him that the alcohol present in sanitizers would cause damage to a phone, gradually removing the anti-stick film that they were coated with.

Mark seemed unimpressed, still convinced that the product wasn’t all that useful he asked what sales the pair had achieved so far. Dan revealed that in the first five months of business, the company had made $537,000 in sales. Mark looked surprised, and impressed, as did the other sharks.

Robert Herjavec asked about the cost of the product. Dan informed him that it retailed for $59.95, and cost approximately $20 to manufacture, although the cost could be reduced further if the company could gain a deal in the tank.

Kevin O’Leary inquired what channels the sales had been made through so far. Wes revealed that although the company had sold exclusively online in the first month or so, the PhoneSoap was now being supplied to the large office supplies chain, Staples, where it was available in 400 stores.

Mark Cuban was interested, but he still had concerns about the functionality of the device, and the intended target market. He observed that many charging devices had become portable, yet the PhoneSoap was far too bulky to carry about. Dan explained that in addition to commercial applications, in hospitals and schools for example, many customers would leave the product in their office, and use it during working hours, it wasn’t necessarily intended as a portable unit.

Kevin asserted that many people didn’t care enough about the cleanliness of their phone, to actually spend money on a device that kept it hygienic. Robert agreed with his fellow Shark, but admitted that the half a million dollars worth of sales made him reconsider his opinion.

Mark Cuban suggested the PhoneSoap was a niche product. Dan explained that many potential commercial and individual customers loved the idea, but the entrepreneurs needed additional funding to develop the concept, and identify the most suitable demographics to market the device to.

Robert finally came to a decision. He told Dan and Wes that he couldn’t really see the mass appeal of the product, he stated that he didn’t need ‘A tanning bed for my phone’, and with that he dropped out of the negotiations.

Mark Cuban saw great potential in the product as a commercial application. He believed that there was a huge potential market for it in hospitals and other healthcare facilities. He asked Wes if the time to sanitize a phone could be reduced from the current time of five minutes. The technical half of the team confirmed that it was entirely possible to reduce the time to just one minute, but to achieve such a result would require a period of testing, and that would be expensive.

Barbara Corcoran thought Mark was being optimistic about the potential demand of the PhoneSoap. She believed that medical institutions would take years to adopt a new sanitation process involving the product, and she still believed that a baby-wipe could perform the same function. Most importantly the product was not portable, and for those reasons, Barbara dropped out.

Kevin was interested, but was unsure of the potential demand for the product. He suggested he would be prepared to make an investment of $300,000, but not in exchange for equity, instead he would collect royalties on each unit sold until he had received a total of $1.2 million, and he would then walk away. Wes thanked him for the offer, but rejected it, on the grounds that the pair wanted an active equity partner, who would provide more than just funding, they needed a strategic partner too. At that news, Kevin confirmed he had no other offer to make, and he was out.

Mark Cuban did have an equity partnership offer to make. He proposed that he would supply the $300,000, in exchange for a 20% stake in the business, but it was contingent on the PhoneSoap device reducing its charge time to thirty seconds, and the cost price being reduced to $12 dollars or thereabouts. Wes and Dan seemed confident that both those aims were achievable, but Lori was quick to stop them considering Mark’s offer any further.

She told the pair that PhoneSoap was a great concept, she completely understood the market for it and believed she could sell it in huge numbers on QVC. She offered $300,000, but in exchange for 15% equity.

Mark quickly asserted that the product was only suitable for business applications, but Lori disagreed, urging the entrepreneurs to accept her deal so that they could ‘Do it all’ with her help.

Wes asked Mark if he would be prepared to reduce the equity in his deal to 15%. but Mark was unwilling to change his proposed terms. Wes suggested they could meet halfway, at 17.5% equity, but Lori interrupted before Mark could even consider the idea.

She quickly told the PhoneSoap pair that if they accepted her deal ‘Now’, she would be prepared to accept only 10% equity. She had barely finished the sentence before both entrepreneurs accepted the offer, hardly able to believe that things had improved so quickly for them in the tank.

PhoneSoap Now in 2018 – The After Shark Tank Update

In May 2016, Shark Tank featured an update to the PhoneSoap segment, and it’s clear that Lori’s involvement in the business has yielded impressive results in the first year of the partnership.

Dan revealed that the appearance of PhoneSoap on QVC has helped boost sales in the first twelve months to almost $5 million, and sales increase every time the product is featured on the shopping channel. Now in 2018, the PhoneSoap company has expanded its workforce to twelve employees, and the entrepreneurs are seeking new warehouse space, in order to help them keep up with demand.

In an interview after the update, Dan revealed that Lori is close to securing a deal with Bed Bath and Beyond that could see PhoneSoap becoming available in all of its 1,500 stores. He expects the deal to be confirmed before the end of the year.

The innovative Wes has been busy too, after receiving many inquiries from customers asking if a larger version of the PhoneSoap would ever be developed for tablet owners, the XL version of the product has just become available. It retails for $120, has a universal charger to fit any tablet and is selling so quickly that there is a month-long waiting period before purchasers can expect to receive it. The original PhoneSoap device has been improved too. The PhoneSoap 2.0 now has an active alarm for customers who like to charge their phones overnight, and it has been fitted with the capability to inform users when they receive a call or message.

There are other products in the pipeline too, the company is very close to finishing a multi-charger, that can clean up to eight devices at the same time, and there are plans to produce a version that can sanitize phones in just thirty seconds.

Dan has got some advise for other entrepreneurs who would like a Shark Tank appearance. He advises them to create a buzz about their product before they enter the tank, to give them a better chance of impressing the Sharks. He stresses the need to know all aspects of the business inside out, and to be as prepared as possible for the appearance beforehand. Finally he suggests that other entrepreneurs have fun and be as energetic as possible in the tank. After all, he asserts, everyone wants to work with someone they like and trust. And he should know, with its new shark partner, PhoneSoap has cleaned up in the most profitable way imaginable.