Top 10 Toy Fads of All time 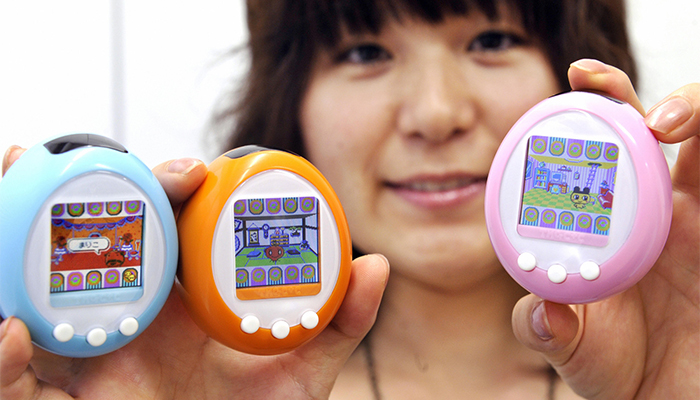 Growing up as a kid, you most likely had that one toy that you were obsessed withーfor many of us, this probably meant that much of our time was spent begging our parents for a trip to the toy store. Compared to the kids of today, most of us didn’t have iPhones or iPads to play fancy games on (maybe a super nintendo, if you were super lucky) during the 80’s and 90s; instead, we’d have actual physical toys which we’d try to sneak into school with us so that we’d be able to show it off to our friends at recess. You’ve probably experienced that feeling of desperately needing a particular toy after watching its commercial on TV as a kidーI mean who hasn’t?

But wait, toys aren’t just for kidsーadults, can collect them too! In fact, a large portion of toy sales are probably done by adult collectors. The difference between kids and adults in terms of toy purchases is simple; kids have to depend on the wallets of their parents while adults simply have to open up their wallets to fetch their credit cards. Considering this, it shouldn’t be surprising that many adults buy toysーheck, someone doesn’t even need to be a collector, for all we know, they might just want to get one to for nostalgia’s sake.

Throughout the years, there have been a number of toy fadsーlet’s name Beanie Babies as an example. First introduced in the early 90’s, these soft stuffed plushes found its way into millions of homes around the world;  they were collectible and they were everywhereーwhich fits perfectly into the definition of a toy fad. If you didn’t collect them yourselves, then you probably knew at least one family or friend who did. They were so popular at the time that people used to sign up for credit cards just for an exclusive Beanie Baby to add to their collection! And let’s not forget about the collectors who spent thousands and thousands on the stuffed toys every weekーit wasn’t just a toy for them, it was a lifestyle!

But it isn’t just Beanie Babies, there has been so many other toy fads over the yearsーTamagotchi’s, Cabbage Patch Kids, Chia Pets…you name it! If you’re interested in reading more about these toys, then you’re in luck. We’re just about to delve into talking about ten of the greatest toy fades of all time. 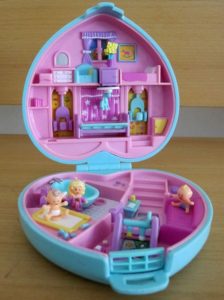 Originally created by toy designer, Chris Wiggs for his young daughter in 1983, the first Polly Pocket was fashioned from a power compactーit would become the small home for a tiny doll toy. Following its conception, the company Bluebird Toys of England later licensed the concept in order to distribute the toy commercially in 1989; Bluebird Toys was eventually bought by well-known toy company, Mattell in 1998. Known for coming in a pocket sized case, each polly pocket also comes with a number of small fashion accessories for the plastic doll toy. While the original ones made by Bluebird were less than an inch tall in size, the later Polly Pockets made by Mattell stood two to three inches in height. These toys were quite the rage during the 90’sーalmost every girl had one of them!

First created in September 1977, Chia Pets reached a peak in popularity during the 1980’s, after the release of the ram varietyーit would be the most widely marketed Chia Pet at the time. Available in multiple animal shapes, Chia Pets were in fact styled terra-cotta figurines, which were used to grow chia, a type of flowering plant native to Mexico. After moistened chia seeds are applied to the body of the figurine, sprouts would then begin to grow out of the designated areas within a couple of weeks, allowing it to resemble the fur of an animal. Besides generic animals, a number of Chia Pets resembling licensed characters have been made, including Scooby Doo, Spongebob, The Simpsons, and Garfield, to name a few. While their popularity have dwindled within the past two decades, they are still created by the original company, Joseph Enterprises Inc, to this date! 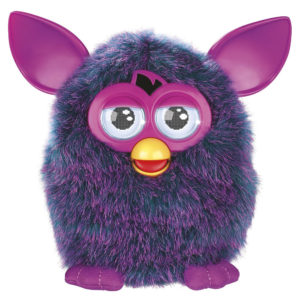 Released by Tiger Electronics in 1998, Furbies were a type of electronic toy that resembled that of a hamster-like owl (some may disagree); available in an assortment of different colours and patterns, they would ultimately be one of the most successful robot toys in history. Known for their ability to speak “Furbish”, a unique language which all Furbies are fluent in, the toys eventually begin to speak English over a period of timeーthis was programmed to resemble the process of learning the language. Having found their way into the arms of many young children during the late 90’s, over 40 million Furbies were sold within its first three years; it’s speaking capabilities were later translated into over twenty different languages for the international market. Since their boom during the 90’s, Furbies have been reintroduced twiceーonce in 2005 and again in 2012.

Made from silicone rubber, Silly Bandz are special rubber bands which are available in a variety of fun shapes such as objects, animals, letters and numbers. They come in a large range of colours and are often worn by young kids as bracelets; in some cases, Silly Bandz have even been banned from classrooms for being too much of a distraction for children at school. While they are often worn as an accessory around the wrist, they can also be used as a regular rubber bandーalthough they are seldom used for that purpose. Although they were originally only available for purchase online, local stores soon began to jump on the bandwagon to sell them across the country. As of August 2010, Silly Bandz were sold in over 8000 stores across the United States alone! 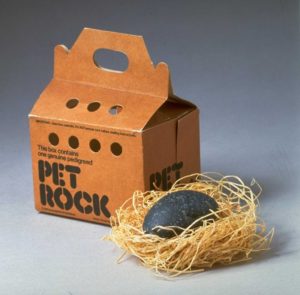 Originally created by Gary Dahl in 1975, Pet Rocks were designed for those who were too busy to take care of a physical pet; Dahl first came up with the idea in a bar while listening to his friends complain about the time required for their pets. Constructed from pieces of smooth stone from the Rosarito Beach in Mexico, Pet Rocks were marketed similarly to live pets and came with a cardboard box, complete with breathing holes. The Pet Rock also came with a set of instruction manuals, which gave the new owner the how-tos on the proper care of the rock; the manual was also known to have included a number of gags and puns, which often referred to the rock as a live pet. A huge hit during the mid 70’s, Dalh eventually sold over one and a half million Pet Rocks at a retail of $4, rendering him a millionaire.

A children’s plush toy based on the children’s TV show, Sesame Street, Tickle Me Elmo was first available in the U.S. in 1996ーit would soon become one of the greatest toy fads in history. The plush was best known for vibrating and chortling when squeezed or hugged. A huge hit amongst young children during the late 90’s, it soon sold out after Thanksgiving in 1996, despite the fact that 400,000 units had been made and distributed to stores. With the holiday season quickly approaching, Tyco Preschoolーa division of the toy company, Tyco Toys, soon re-ordered 600,000 more units from suppliers. Demand for the toy was so high that while they were waiting for the new shipment, that owners of the doll began selling them for tens of hundreds of times higher than the retail. For instance, it was reported that someone had bought a Tickle Me Elmo privately in Denver for a whopping $7100! 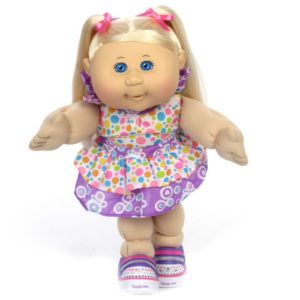 Created by business man Xavier Roberts during the early 80’s, Cabbage Patch Kids are a line of soft, fashioned dolls. First available for purchase at various art shows, Cabbage Patch Kids were often known as “The Little People” during that time. Unbeknownst to Roberts at the time, the toys would soon become one of the most popular toy crazes of the 80’s. Later introduced at the International Toy Fair in New York City, the Cabbage Patch Kids soon grew insanely in popularity; by 1983, riots were breaking out in various stores across the country for the toys. Six years after its original conception in 1978, the dolls had grossed a record setting $2 billion dollars!

Originally created in Japan, the Tamagotchi was a record-breaking handheld digital pet created by Akihiro Yokoi of the Bandai toy company. Known for its distinctive egg-shaped appearance, Tamagotchis were available in a large variety of colours and featured a number of simplistic creaturesーwhich the player would then be responsible of taking care of. Upon activation, an egg would hatch revealing a small animal-like creature; the pet would then develop depending on the player’s actions (for instance, dying if not cared for). One of the fastest growing fads during the 90’s, Tamagotchi’s have since sold over 76 million units across the globe as of 2010. Despite its decline in popularity within the last two decades, it remains to be one of the most popular hand-held pets in the world. 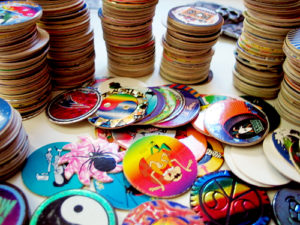 Also known as “Milk Caps”, Pogs were one of the most desired toys during the early to mid 1990’s. Made of of cardboard, these circular discs were often decorated with various images on one or two sides. Said to have originated on the Hawaiian Islands during the 1920’s, the game was later reintroduced in 1990 by Blossom Galbisoーan elementary school teacher in Oahu. As the popularity of Pogs grew, thousands of milk caps were soon created and released, each with their own unique image on the sides. Due to the fact that children often bet the circular discs themselves in the games, some schools at the time even had to ban them as they were seen as a form of gambling!

Largely considered by many to be the greatest toy fad of all times, Beanie Babies were definitely a huge deal during the late 90’s. First launched in 1993, Beanie Babies were known for their plastic bean stuffing and heart shaped logo tag. While sales for the toy were so low at one point that many retail stores refused to sell them, they later turned into a craze starting from the mid 90’s. Due to the fact that various designs of Beanie Babies were systematically retired by the company after a period of time, many individuals soon began buying them, thinking that they would increase in value after they’ve been retired. At the peak of its popularity, a handful of Beanie Babies had actually sold for over 1000% on online auction websites, such as Ebay! Some hardcore collectors have also been known to have insured their collections for thousands of dollars! However despite the raging craze, the bubble for Beanie Babies soon burst during the 2000’s, causing their value to plummet greatly.