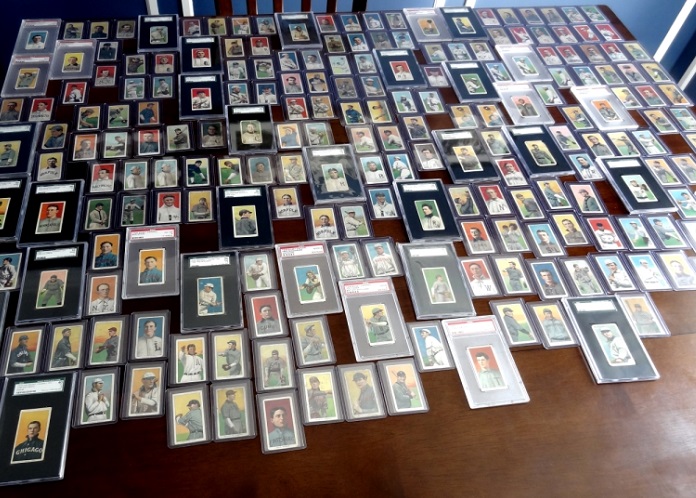 In the last decade or so, particularly since the invention of the internet, baseball cards have lost some of their appeal for potential collectors looking for a sure-fire investment opportunity. Since the 1980’s baseball cards have been mass-produced in such large numbers that rookie cards from the time may be vintage, but they are a long way from valuable, as hundreds of thousands of them are still in circulation. Topps are attempting to reverse the trend, offering dynasty sets, that retail for up to $400 and contain just one card, but that card is not only personally signed by the player, but it’s also guaranteed to be one of only ten in circulation. Hopefully that tactic, and others like it will re-invigorate the over supplied baseball card market, and attract a whole new generation of collectors to baseball cards, but it will be some time before the golden era of card collecting recovers back to its former dynamic state. Until that happens, read on to find out which are the most valuable baseball cards in existence today. 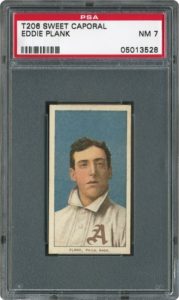 Edward Stewart Plank, or ‘Gettysburg Eddie’ as he was known to his fans, was a pitcher who played for the Philadelphia Athletics from 1901 to 1914, followed by short stints at the St. Louis Browns and the St. Louis Terriers in 1915 and 1916 respectively. The greatest left-hander of his day, Plank was the first to win 300 games and ranks third in all-time wins amongst left-handed players with 326 career victories. There is no firm consensus among collectors as to why Eddie’s 1909-1911 T206 card is so rare today, some claim it was the result of a printing error and short production run, others claim it was Plank’s dislike of smoking. Either way the card, of which less than ten are believed to still exist can expect to reached a price of at least $188,000 in any future sales. Plank died of a stroke in 1926 aged just 50 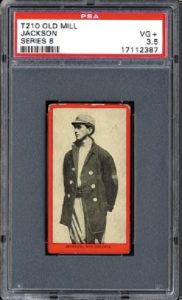 Joseph Jefferson Jackson, commonly known as ‘Shoeless Joe’ played outfield at the beginning of the twentieth century. His professional career began in 1908 with the Philadelphia athletics, before he joined the Cleveland Naps in 1911. Joe left Cleveland in 1915 and joined the Chicago White Sox where he remained until 1920. His career was cut short in that year due to his alleged involvement in the Black Sox match-fixing scandal. Joe protested his innocence for decades afterwards, until his death in 1951, and despite there being no evidence against him, Kenesaw Mountain Landis, the recently appointed, and first, baseball commissioner banned Joe for life from the sport. There are less than ten of Joe’s T210 Red Border card left in existence and its value is just shy of $200,000 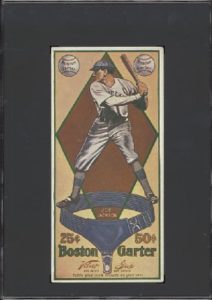 Joe enters the list of most valuable cards twice with his 1941 Boston Garter card, as with his T210 Red Border card, there are less than ten of them known to exist, in part due to the controversy that surrounded the end of his playing career, when former fans are believed to have destroyed his card in anger at the allegations made against him. Joe’s ‘Shoeless’ nickname came from a game in South Carolina when his feet were so heavily blistered, due to new cleats, that he stepped up to the plate with no shoes on. Joe’s innocence, or guilt, is still hotly debated by fans and historians alike, but his ability has never been in doubt. In 1911 Shoeless hit for a .408 average, which remains to this day the sixth-highest single-season total in the modern era of the game, which is generally considered to have begun in 1901. Additionally, the legendary Babe Ruth revealed later in his own career that he had modelled his hitting technique on Jackson’s. 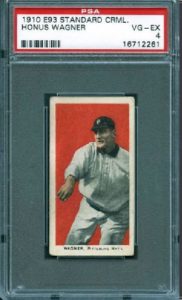 Johannes Peter ‘Honus’ Wagner is generally considered by most baseball historians to be one of the greatest, if not the greatest, shortstop ever. He played for 21 seasons in Major League Baseball, from 1897 to 1917 almost exclusively for the Pittsburgh Pirates. He achieved a number of notable accomplishments during his career, including eight batting titles, and was known as ‘The Flying Dutchman’, due to his outstanding acceleration, speed, and German heritage, as ‘Deutsch’ become Dutch for the purposes of the moniker. Ty Cobb called him ‘Possibly the greatest player to ever take the diamond’ and although Cobb is often considered to be the greatest player of the dead-ball era, many consider Wagner to be the better all-round player. In the 1909 World Series Wagner led the Pirates to victory in their first ever win, against Ty Cobb and the Detroit Tigers, and his card from the season, of which less than thirty exist, is worth in excess of $200,000. 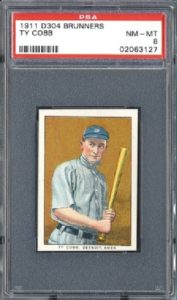 Tyrus Raymond ‘Ty’ Cobb was one of the most accomplished baseball players of all time. Nicknamed the ‘Georgia Peach’ Ty spent twenty two seasons with the Detroit Tigers, with the final six as a player-manager. In 1936 he received the most votes ever in the inaugural Baseball Hall of Fame ballot, taking 222 out of a possible 226 votes, or 98.2% of the votes. He broke over ninety Major League records during his time with the Tigers and retains some of them even to this day, including the achievement of being the youngest player to ever score 2,000 runs. Unfortunately Cobb’s ability on the field was partly born out of his aggressive, and often violent nature. Other players believed that Cobb saw every game as a war and historically it is generally considered that his potentially dangerous tactics detracted from his brilliance. A small circulation of General Banking Co. cards featuring Ty were produced from 1911 to 1914. Their rarity has helped them to reach prices as high as $273,000 in modern times. 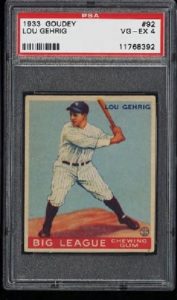 Henry Louis Gehrig was a first baseman who played for the New York Yankees for seventeen seasons from 1923 to 1939. Lou was known as ‘The Iron Horse’, mainly due to his ability as a hitter and his stamina, During his career he was an All-Star seven times in a row and a Triple Crown winner once. In 1938 he was elected to the Baseball Hall of Fame and was the first Major League Baseball star to have his number retired by a team. His record of most consecutive games played, at 2,130 was considered unbreakable for many years and remained in place until 1995. Lou was forced to retire suddenly due to the onset of Amyotrophic Lateral Sclerosis (ALS) in 1939, commonly known as Lou Gehrig’s disease in North America. The incurable neuromuscular disorder took his life two years later, when he was just 38. His 1933 Goudey card can fetch up to $275,000 in sales, despite its poor color which was the result of a printing error. 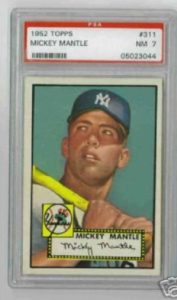 Mickey Charles Mantle, known as ‘The Commerce Comet’ and ‘The Mick’ in equal measure, played for the New York Yankees during his entire career, which lasted from 1951 to 1968. Considered by most to be the greatest switch-hitter in the game’s history, Mickey was inducted into the Baseball Hall of Fame in 1974. Able to hit for average or power with equal effect, Mantle is seen by some as the biggest offensive threat of any center fielder in history, and he had the highest stolen base percentage of any player at the time of his retirement. He appeared in twelve World Series, including seven Championships and hit 536 Major League Baseball home runs during his career. His 1952 Topps card is rare and highly sought after by collectors, with a reasonable condition example of the card fetching $282,000 at auction in 2005. 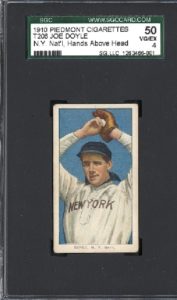 Joe Doyle didn’t achieve any incredible feats or beat any records during his unremarkable five season career at the New York Highlanders, but his 2010 T206 card has achieved a great value due entirely to a mistake at the printers rather than his own achievements. After just a few of the cards were printed, it was noticed that the pitcher depicted was a member of the N.Y. Nat’L, when in fact Joe was a member of the American League. The print run was stopped before many incorrect cards were printed, which led to this rare variation obtaining an almost impossible rarity. With less than six examples of the card known to exist, specimens in good condition have sold for as much as $329,000. The most likely explanation for the error is that The American Tobacco Company confused Joe with Larry Doyle of the New York Nationals. If ever a pristine copy of the card were to appear it could reasonably be expected to sell for up to $1 million. 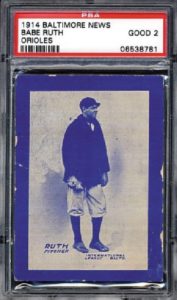 Babe Ruth’s popularity has transcended the World of Baseball and he is today widely regarded as one of the greatest sporting heroes in American Culture, as well as being considered by many as the greatest baseball player of all time. ‘The Bambino’ played in Major League Baseball for twenty two seasons, from 1914 to 1935 and achieved his greatest accomplishments as a slugging outfielder for the New York Yankees. He made 714 career home runs, a record at the time, and was elected as one of the ‘first five’ inaugural members of the Baseball Hall of Fame in 1936. There are only ten of Babe Ruth’s rookie card known to exist at the present time, and a good condition specimen of the card sold at auction for $517,000 in 2011. 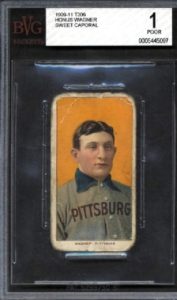 The most valuable baseball card in history is the second one in the list featuring The Flying Dutchman, Honus Wagner. Produced by the American Tobacco Company it was removed from cigarette packets soon after distribution had begun due to Honus’s dislike of smoking and his determination not to allow his name to be used to encourage young fans to smoke. As a result of Wagner’s objections only 200 of the cards were ever produced, and approximately fifty are known to have survived to the present day. An absolutely pristine specimen of the card became known as the Gretzky T206 Honus Wagner Card when it was bought by a group of collectors including the hockey star Wayne Gretsky in the 1990’s. It was sold in a record breaking online auction in 2000 for $1.27 million to a collector for the biggest price a baseball card had ever reached. That record didn’t stand for even a decade however, as the card was sold again, in 2007 to Arizona Diamondbacks owner, Ken Kendrick, who paid $2,800,000 for the card.