In their audition tape, Steven Sashen introduced himself and his wife Lena Phoenix in front of a backdrop of Boulder, Colorado mountains. He said that most people hint of that city as a bunch of aging athletic hippies. Steven stated that the image was right, and he and his wife were their spokespeople. The video showed Steven running in the street, as he narrated that he was a sprinter. He got back into the sport after being away from it for 30 years and frequently injured himself. Steven’s friend suggested removing his shoes when he ran, and it worked well. He said that he’s been running “basically barefoot” since then. This ordeal is what inspired the couple to start their new business, Xero Shoes.
Lena spoke up, calling their simple looking product revolutionary. Steven said that their aim was to change the world, and they were hoping that the Sharks would see Xero Shoes as visionary. Steven stated that their whole lives had been given over to making their product a success. The wanted an investment from the Sharks to improve their current position. They wanted to be more successful because they believed that they had a superior product. 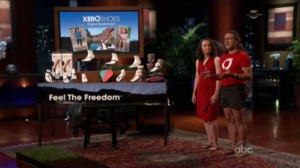 The two of them walked out onto the Shark Tank stage. Lena introduced herself first as the owner of Xero Shoes. Steven went next, letting the Sharks know that he was the CEO. They wanted a $400,000 investment in Xero Shoes in exchange for 8% equity stake. The camera panned over to the Sharks, who looked shocked at the valuation. Steven said that traditional expensive running shoes are not the way to go. He stated that there are studies that show that running barefoot is better for the runner’s feet. Running barefoot comes with other risks, and that is why Steven invented Xero Shoes. He pulled his own off his foot, and it looked just like a regular flip flop, but with straps made out of paracord. He called it “original barefoot wear.”

Steven said that his product was a more high-tech version of the shoes that people have been wearing for millennia. Lena jumped in, saying that an independent university study showed that Xero Shoes are primarily the same as running barefoot as far as your feet go, but they add an extra layer of protection. Steven stated that they had a range of designs from minimal- performance based to “fashion- forward” for a night on the town. The sandal that they planned to for this statement featured knotted paracord and cheap looking metal beads. Lena said that the shoes are more comfortable then flip-flops, since they are super lightweight. She also claimed that they don’t smell, even though they are intended for exercise. Lena started handing out samples.

Robert looked confused, asking if a person could run in Xero Shoes. It was a fair question – they did not look sturdy at all. Steven said that you could. He tried them out and worked them hard, being one of the fastest American sprinters. Robert still looked disbelieving as he turned the shoe over in his hands. Steven told him that the shoe he was holding was designed by a guy who runs “ultra-marathons” on a regular basis. He said that he created a custom-made Xero Shoe pendant, which he handed over to Kevin. Kevin stated that he liked it since it captured the essence of an athlete. The camera focused on the decoration, and it was a photo of Mr. Wonderful in a heart-shaped pendant. Steve invited the Sharks up to the stage to try a pair of Xero Shoes on.

Robert said that he was the only runner in the tank, and volunteered himself to go onto the stage. He rolled up his pant leg and took off the dress shoes he was wearing. Steven gave him two different Xero Shoes to put on each foot. Robert asked if the shoes were all custom made. Lena told him that they sell the shoes in two different ways. You could purchase a DIY kit where you can cut the rubber down to your foot size, or Xero Shoes would custom-make the shoes for you. As Steve adjusted the Xero Shoes onto Robert’s foot, Robert said that it doesn’t feel like he had anything on. Steven insisted that you don’t need a lot of support for your for. He said that putting your foot in supportive shoes was similar to putting them in a cast. There were three surfaces placed on stage – one was grass, one dirt, one gravel, and rocks. Robert walked across each, testing out the shoes.

Steven asked Robert how he felt, and Robert said that he felt great, even though they look weird. He went back to his seat, still wearing the Xero Shoes. Daymond did not look impressed. He asked the couple why they were coming on Shark Tank with what amounted to rubber and a string, and called it 5 million dollars. Lena said that they started the business about 2.5 years ago, and sold $650,000 worth of product, even though they did not advertise at all, and they were just selling through a website. This revenue was split between the custom made shoes, and the DIY kits. Robert wanted to know how much they’ve done the last two months. Steven said that $130,000 was done in that period, indicating a sharp spike in sales. He stated that they are on track for 1.2 million in sales this year.

Kevin, of course, wanted to know what their profits looked like. Lena said that they were projecting $200,000 for the year. Mark wanted to know that the costs were to make, and what each unit sold for. Lena said that their best-selling product was the 4mm DIY kit, which sold for $24.95 on the website. Their cost for materials is $3.11. They wholesale the kit for $12.97. Mark wanted to know the breakdown for what is sold between retail and their website. Lena stated that over 90% was sold through the site. They just recently began acquiring retail accounts, and they had nine so far. Xero Shoes had gotten reorders from 9 of them so far.

Robert said that when he opened the box, it just looked like a common piece of plastic. “Like a broken sneaker,” Barbara chimed in helpfully. The couple laughed at that. Kevin asked if they were asking him to value their business at 25x the amount of sales they’ve gotten. Kevin said that he had an issue with some competitors that they were likely to attract once the market catches on. He stated that the idea would be very easy to copy, especially for someone with more market reach.

Steven wanted to correct him. He told Kevin that they had a design patent on the item, which would prevent copycats. Kevin insisted that product was just a piece of rubber and a string with no proprietary value. Daymond said that he could roll out copies within 30 days. Steven stated that he would challenge Daymond for that, and Daymond asked if he wanted to go head to head with it. He repeated what Kevin said, indicating that they cut up rubber, put a string on it, and called it high technology. They stated in their valuation that they are worth $5 million.

Steve said that their assessment came from industry experts. Daymond went out. Robert asked if Steven was a shoe creator already when he invented Xero Shoes. Steven ignored the question, instead stating that he drew his inspiration from shoes that were created 15,000 years ago. I guess the patent on that is no longer standing. Lena referenced a particular people in Mexico who wore similar shoes and are known for running long distances. Kevin said that he liked the myths of it, but that that the pods itself was a crapshoot. He stated that he would make an offer just for the heck of it, saying that he would give them the $400,000 in exchange for 50%. He told the pair that they were worth about $800,000. Steve thanked him and said that they would get back to him on that.

Mark looked surprised, but Steve explained that it was not an offer he would take right off the bat. Kevin said that he understood that they were looking for the money, but he was a rational investor. He called them delusional entrepreneurs. Steven acknowledges that that might be the case. Kevin continued, stating that somewhere in the middle was the actual reality of the situation. Barbara told Steven that he gave her a headache because he reminded her of her first husband. She also didn’t like that the saddle had a black sole, which could heat up in the sun. She especially didn’t like that Xero Shoes had a knot on the bottom, which could be uncomfortable, and might pose a liability. She folded, saying that she was not crazy about the product.

Robert stated that he loved it, saying that he was an aging runner searching for solutions for his knee pain. Steven told him that Xero Shoes would be the thing to try. Robert smiled, and said that he would love to try it, but not at their valuation. He went out. Kevin told them that they already had an offer from a rational person. He said that he doesn’t have a show company in his portfolio, and would like to try it. Steve told him that 50% was not a thing that they were willing to do. Kevin asked what the counter was, and Steven, amazingly, said to him 10%. Kevin called him insanely. Steven stated that another company which served the same market just got 10 million dollars in exchange for 25%.

Mark looked aghast, and he started to school the pair. He told them that just because a competitor was able to get that price didn’t mean that they were going to get the same deal. He said that it just means that they are competing with someone with a lot of money behind them. He said that investors rushing into an area with other investors were called a bubble, and that’s really what they were facing. Unfortunately, bubbles burst. Mark told them that they should take Kevin’s deal, and Mark was out. Kevin asked the pair what they were going to do. Steven declined, and Kevin let them know that they were dead to him. In their exit interview, the pair said that they would show the Sharks that they made the incorrect decision by not investing in them.

Xero Shoes Now in 2018 – The After Shark Tank Update 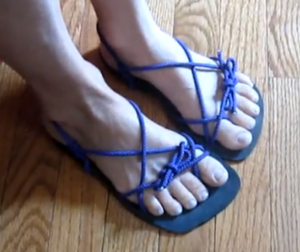 Even though the team behind Xero Shoes ended up not taking the deal, just having their episode air gave them 3,000 new orders. Their website ended up crashing and crashing due to the amount of people rushing to buy Xero Shoes. It seems like they were able to court a new target market – the non-barefoot, non-running market. These were individuals who were just looking into finding a comfortable sandal. They expect their sales to go up to $3 million in 2016. You can purchase Xero Shoes on their website, as well as in about 100 different retailers worldwide.