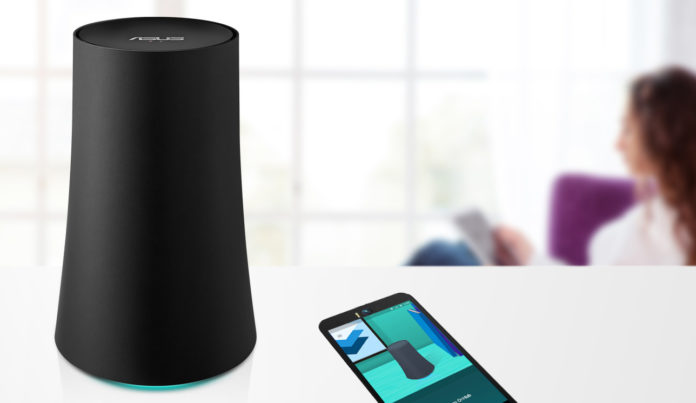 The world of routers has needed an upgrade for generations. Not only is the box an unappealing sight with plenty of chances to get wires tangled, but for many it provides only moderate mobility within their home and a steep drop off in connectivity due to antenna limitations. Asus, with the introduction of their version of the OnHub, seeks to create a router which is not only superior in functionality, but also an aesthetic that would win over even the harshest home decorator. Here, we will take a look and see if they achieved their goals, or just couldn’t connect with their audience.

OnHub Router: Out of the Box

To be specific for this review, I will mention that I ordered the Asus Onhub alongside the CM500 High Speed Modem from Netgear, as a means of killing two birds with one stone. However, testing occurred both on my normal modem (an Arris DG 167) as well as this more premium option. Taking out the Onhub, I was more than a little surprised by how much of a solid monolith this router was. Having dealt with standard routers up to this point, what stood out to me was the lack of individual physical lights to indicate connection statuses and similar things.

This later turned out to be a non-issue, as the OnHub features a light system on the bottom of the router to indicate whether you need to set up the system, if it’s already working fine, or if something has gone horribly wrong. Setup itself was incredibly easy, as besides plugging in the wires, I simply needed to download an app to my cell phone (an android device, though iOS is also supported) and link it to the router via a ping system. Then, through the app I was able to set up the wifi in terms of name, password, and if I wanted it to be a bridge system or the main router. You can also change settings like your DNS, Static IP, and other advanced network settings with a click of a button, which was remarkably easy.

After initial set up, there was one setting that called out to me as a curiousity. In the manual and one of the key features advertised for this router happened to be the “wave control”, where prioritization of a device could occur just by passing your hand over the router, and having a device preselected. While this will be reviewed more in the performance section, it is worth noting this set up process took under 30 seconds.

After setup, I was naturally curious on if the OnHub would deliver on the promises claimed on the box. Would it really be able to run at 1900Mbps? Could it automatically detect the least inhabited channel and allow for better connections even in a busy apartment complex? And most importantly, could it handle the network demands of 6 devices, with at least half running intense, connection dependent programs?

In terms of speed, I will be the first to admit that I would not be able to test out the capabilities of the router to make it to 1900 Mbps. However, what I can attest to is that the WiFi speed was absolutely maxed out as per what was allowable from our connection and modem. In terms of internal network performance, the speed was nothing short of astounding as well, allowing for in-network file transfers to take place at the blink of an eye (that being only the slightest of exaggerations).

To test whether the channel detection method for the OnHub was affected, it was a simple game of wait and see. Usually, around either 3pm or 7pm, internet speeds have historically come to a crawl due to the activity of nearby users and networks. In fact, it had previous just became a fact of life that one should plan to download any large file well before or after this time unless you wanted the entire network to chug along. For example, whereas at any point in the day outside these periods one could easily watch a YouTube video at 1080p, during these times even 480p was a stretch. However, with the OnHub, this effect was very greatly diminished. While there were some moments of hiccup, they were absolutely miniscule as compared to the normal router condition. Video streaming had essentially no deficit, and while there was a small amount of gaming lag here and there, it was certainly more tolerable.

Lastly we have the area of most interest, how does the OnHub handle heavily laden networks, and does that wave feature really work, or is it just a silly gimmick to rival the features of such devices as the Amazon Echo? In terms of handling simultaneous devices, the Asus OnHub was a game changer. With 5 of the 6 devices streaming at highest possible quality (spread across a rather spacious apartment with plenty of walls between the user and the router) and one running a multiplayer game, there were no issues of any sort. In terms of the wave function, my opinion is somewhat undecided on whether it is a feature or a gimmick. While the gaming PC did tend to perform slightly better than when “on the same level” as the other devices, it was not a difference that would have been noticed if one was not looking out for it. This is not exactly a point against OnHub however, as the performance was already stellar. I can see this being potentially useful in scenarios where an absolutely massive transfer of data must take place during a short time, but many users will find the wave function more entertaining than useful.

While we did not experience any issues in terms of function or connectivity, it is always worthwhile to test any troubleshooting features on a router device. For the OnHub, there will be two decidedly opposed camps when it comes to fixing the Asus device. On the one hand, for the everyday user, the troubleshooting function using the app is incredibly easy and is written in plain language, making many more options available to the average user than turning it off and turning it on again. On the other are those like myself who fashion themselves either network hobbyists or experts. While again, the app makes most issues very clear and easy to handle, the OnHub app does take away some of the lower level manipulations that one would typically have if altering a router via the command prompt. This doesn’t have any real negative ramifications except for those who like to tinker and hack devices, who may find trying to pry into any such settings more trouble than it would be worth.

In terms of firmware and software issues, given the fact that Google is the main distributor of both, I would not be one to be concerned. Updates tend to roll out on a rapid and regular basis, and tend to patch both known bugs and security issues in a rapid manner.

Final Thoughts on the OnHub

In terms of performance, features, and ease of use, there is no denying that the Asus OnHub is well worth the price of $170 (or regional equivalent). Whether for a home or an office, it is hard to think of a domestic network scenario where this little monolith would not be of great benefit and make connectivity even faster and easier than ever before. Likewise, with the forward looking engineering of allowing for both 2.4 GHz and a 5G network, as well as the innovative “If This Then That” protocols which will make connection to home devices like lights, thermostats and whatever else comes in the next few years, OnHub will remain relevant for years to come, even as other routers may fade into obscurity. In short, I would readily encourage those curious about the Asus OnHub to test it out in their home, and see what the future holds.

You can currently get the Asus OnHub with all discounts automatically applied at Amazon.com by clicking here