Before their Shark Tank appearance, Angie and Dee Cowger build their small Custard stand into a regional landmark. They made themselves multi-millionaires by getting their famous Custard Stand Food Product hotdog chili and chili soup into many local stores, such independent grocery stores up to Sam’s Club and Walmart. Would the Sharks see their success, and jump all over it into a deal. Let’s take al look. 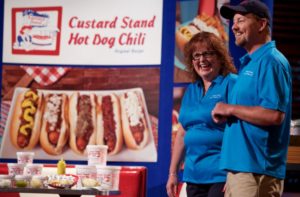 In their audition video, Dee and Angie Cowger said that they met in high school, and soon after that, they opened a business called the Custard Stand soon after. It served ice cream, sandwiches, hotdogs, and hamburgers. The video showed happy customers sitting in the store, as the narrator said that the restaurant drew people in with it’s “Home-Town” feel. Dee told the audience that the food was also great. Angie stated that they have one product in particular that the customers love, and they decided to bring it to the retail market. Angie stated that Custard Stands’ goal was to be a national business, and to put their hometown on the map.

The pair entered the Shark Tank holding hands and wearing bright blue matching company shirts. Dee introduced both of them and asked the Sharks for $400,000 in exchange for 10% of their business. Kevin looked amused. Dee launched into the story behind the business, repeating that they had started Custard Stand Food Products 24 years ago. It started out as a small stand in Custard Springs, West Virginia, and doubled in size since then. Dee said that their most popular product was their chili dogs. Angie chimed in, saying that their chili was what made the chili dogs stand out. She said that the recipe has been in her family since the 1920’s, and it’s been passed down from generation to generation. Dee stated that they finally brought their chili to the retail market due to “countless” customer requests.

The couple called their product Custard Stand hot dog chili, and Angie said that it was an all-beef hot dog chili with no fillers such as soy or textured vegetable protein. She continued, saying that there was no additives, transfer, or gluten in the chili either. Angie claimed that beef was the number one ingredient on the label, and you would be able to pronounce every single ingredient. Kevin smiled at them as Dee started to pass out samples. The other Sharks looked excited as well. Angie told them that the chili does not contain beans, while the chili soup had beans, tomatoes, and a little more heat. Robert said that the chili tasted sweet, and Mark told them that he liked it. Robert stated that they must have a lot of sales, and Dee told them that they did $1.6 million in the last year.

Daymond seemed impressed. Robert wanted to know how they were selling it, and Dee said that they were in Walmart, Kroger, and Sam’s Club on a regional basis. Robert asked if the companies felt like the taste of the chili was local in nature, and Angie told him that hot dog chili was a regional product. Robert said that they were already successful, and wondered why they needed the additional investment. He wanted to know the big plan. Angie told him that they wanted to be a national brand. Robert asked how much of the sales from last year were profit for them, and Dee told him $200,000 after they paid themselves.

Kevin said that he was a numbers guy, so it wanted to lay it all out. They wanted $400,000 for 10%. A hypothetical competitor would pay them a million dollars to buy them out, but they wanted to value the business at $4 million, which was a big difference. They wanted to say that the branding contributes the rest of the value, but it’s a lot for a regional brand. He went out, saying that the numbers don’t lie. Mark stated that they built this brand up from nothing, and now they were multi-millionaires. He said that’s why he does the Shark Tank, so everyone in America can wonder if they can do the same thing. He clapped for them. But he said that from an investor’s perspective, it was too complicated. He went out but stated that they were everything that viewers aspire to be, and they should be proud of themselves.

In their exit interview, Angie tearfully told the audience that they were deeply disappointed, but they draw strength from each other and their friends. They would continue growing. 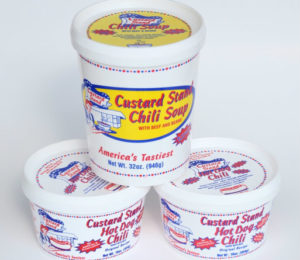 So did they? After Shark Tank, they were able to expand their business to 15 states. Not only did their online sales shoot up by 5,000%, but they also got a bunch of emergency wholesale restocking orders from their accounts in the same week. They managed to ship orders out to all 50 states, as well as Puerto Rico. IN June of 2016, they went to New York City to participate in the Summer Fancy Food Show, where they would meet up with buyer and distributors. Only time will tell how successful they can be.