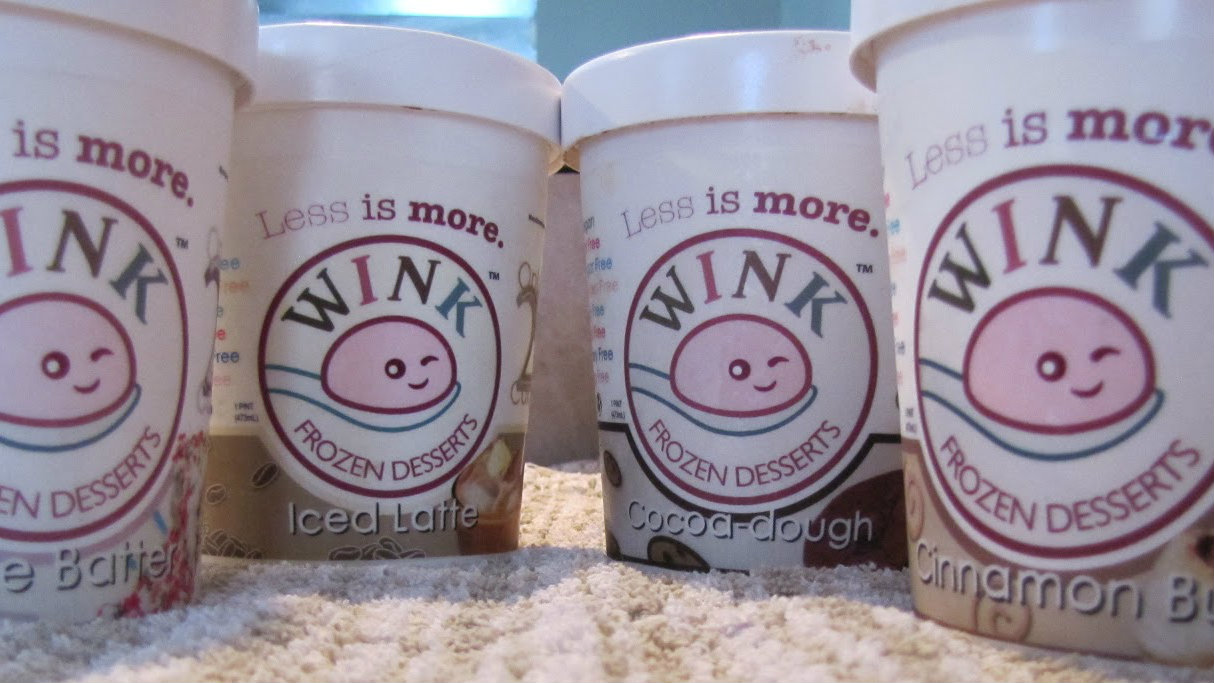 Gabe Wolf, the CEO of Wink Frozen Desserts, had to make a change. At 17, he was handed a laundry list of dietary restrictions – he was diagnosed with Celiac’s disease, and a dairy intolerance. He used pea protein to recreate his favorite treat – ice cream. Gabe recruited Ani as Wink’s head of operations. Would the pair impress the Sharks with their healthy take on America’s favorite dessert? Let’s take a look. 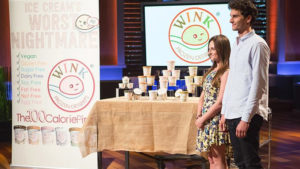 Gabe Wolf and Annie Blinova walked out into the Shark Tank and introduced themselves to the Sharks. They asked for $300,000 in exchange for a 15% equity stake in Wink Frozen Desserts. As he launched into his presentation while a confident “Ice Cream! ” Gabe faltered and stuttered. Mark laughed and told him that “ice cream” was easy to say. Gabe quickly recovered, and started that ice cream is America’s favorite dessert. He said that unfortunately, the downside to ice cream is that it is super bad for you.

Gabe said that going cold turkey on ice cream is harder than it seems. He was a self-described ice cream addict who had a solution. He made his own concoction in his kitchen to meet his ice cream needs. Annie started in, saying that Wink Frozen Desserts is a sugar and dairy free version of the snack that everyone loves. The dessert is also vegan, and free of the top 8 allergies typically found in ice cream and ice cream substitutes. The entire pint is only 100 calories. Robert, who is a health buff, looked impressed. Annie said that the ice cream-like treat is made with all natural ingredients, but still maintains the proper taste of ice cream.

Gabe claimed that the Sharks would not miss out on regular ice cream once they started to consume Wink Frozen Desserts. It’ll satisfy your sweet tooth without the health risks of standard ice cream. He continued, saying that Wink Frozen Desserts needs help from the Sharks for national exposure. They finished their presentation with a wink. Robert asked for samples and told the pair that he was an ice cream expert. He said that out of all the Sharks, no one eats more ice cream than him. Annie gave him a sample platter. There was an ice cream sundae in the middle for each Shark, surrounded a sample of each flavor that they provide. Robert tentatively tried his sample and made a face.

Gabe said that they first flavor is a gluten free cake batter, which is the first taste of its kind on the market. The next flavor is coco-dough, which is a form of guilt-free cookie dough. Other flavors include Cinnamon Bun, Choco-mint, a coffee flavor, as well as a vanilla bean. Mark tasted it, make a face, and put it down. Lori asked what the sugar substitute was, making a face like she had just eaten something sour. Gabe told her that they use a combination of stevia and monk fruit. Robert said that the flavors he tried taste pretty bland on it’s own. Gabe stated that it’s not a product that everyone who tries it will like. Robert asked if Wink Frozen Desserts were meant to be eaten on their own, or mixed with something.

Annie said that while their customers could go either way, she preferred to eat the cake batter on its own. Kevin said that the dessert doesn’t have to be a hundred calories per pint- even 200 calories would be half what typical ice cream is. Robert asked if it was true that the average pint of ice cream is 500 calories, and Kevin said that the average was actually 600. Gabe and Annie agreed. Kevin asked if they had done any testing to see if 200 calories would make the product more appealing. Gabe said that they had, which did make the flavor more interesting.It did make the product less healthy by adding fat or sugar, but only a couple grams of each.

Kevin asked what the sales said since it doesn’t matter what he or they personally think. Gabe stated that they’d sold over $500,000 worth over three years. The Sharks deflated at the length of time, after briefly looking excited at the numbers. Mark asked how they sold the product. Annie said that they were in a few stores in their regional area, such as Whole Foods. Lori wondered how many Whole Foods they were in, and they told her 30. Lori also wanted to know that the fake ice cream was made out of, and Annie informed her that they base product was pea protein.

Robert said that he was curious to know how Gabe came up with the ice cream in his kitchen. Gabe stated that he had been the chubby kid in school, and Barbara told him that he was looking good now. He thanked her and continued. He told the Sharks that his family had been plagued with obesity and diabetes, and he was diagnosed with Celiac’s at the age of 17, as well as a dairy intolerance. Barabara asked if it was a full-time job for both of them, and they told her that it was. Robert wanted to know how much they made in just the last year.

Gabe said that the gross profit for the previous year was $87,000. Robert asked where the break even point was, and Gabe let him know that they were projected to rake in $650,000 this year. Barbara looked shocked. She asked where the sudden change was coming from. Annie let her know that they had agreements with 180 stores. Gabe said that the reason for their loss last year came from issues with the co-packer. Their freezer broke, accounting for a loss of $60,000. Robert stated that he understood now, as the numbers just had not been adding up for him.  Barbara cut in, telling the pair that she was not a fan of their product. She was not a fan of the taste, but more importantly, Wink was losing money. Barbara told the entrepreneurs that she liked to acquire businesses that were winners. She would’ve wanted to see them appear on Shark Tank after they got their finances in order. She went out, citing the timing of their pitch.

The pair thanked her, and Gabe addressed a few of her concerns. He told her and the other Sharks that they were on track to make over $600,000 this year, and they would make a profit off of that revenue. The next year, Wink Frozen Desserts was projected to meet with retailers who love their product, and want to put it on the shelves. Mark said that he wanted to love the product, since he loves ice cream, but is lactose intolerant. He stated that it was possible that Wink’s products were an acquired taste, but it did not please his taste buds. He went out.

Robert said that he loved Gabe’s passion, and how he started the business by being personally invested in the product. He stated that he did not have good connections in the food realm, but he wished the two of them all of the luck in the world. He went out. Lori said that she really like that the Wink Frozen Desserts ice cream was only 100 calories per pint. She stated that anyone would like to eat an entire pint of ice cream guilt free. Lori continued, stating that the taste was really a problem for her. She wanted to like it, but she just didn’t. Lori went out.

Robert pointed out that Kevin was the only one left. Kevin said that he was listening to the other Sharks while considering his decision. The other Sharks said that Wink Frozen Desserts had achieved a product that was healthy, and allergen free – but also taste free. Kevin stated that the only customers that they had were those that needed an ice cream alternative for health reasons. He said that he thought they could do better than that, especially with the taste. He stated that the ice cream tastes like crap, and he went out.

Barbara accused Kevin of being rude, and Kevin denied that he was. Before they left the stage, Mark stopped them. He said that they might not have expected the reaction that they got, but he assured them that the Sharks were not attempting to throw them under the bus. Robert agreed, stating that Wink Frozen Desserts was not chasing a wide market. Gabe and Ani said that they understood that their product was not for everyone, but insisted that their customers were obsessed with the product. Mark said that was all that matters. Ani expressed her disappointment in the exit interview, saying that they wanted the Sharks to enjoy the frozen desert. Gabe stated that they would continue on their path to success, even though it would be slower going without the Sharks. Let’s see how they did after their episode.

Wink Frozen Dessert Now in 2018 – The After Shark Tank Update 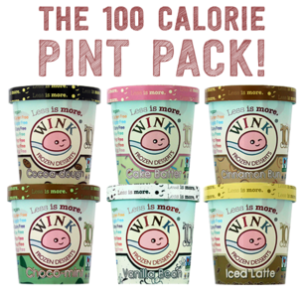 If you are interested in a healthy ice cream alternative, you can still purchase Wink Frozen Desserts on their website, or find it at a local Whole Foods. Their social media accounts are still very active. According to their Twitter, they are starting to expand their reach into Boston and NYC. Hopefully, Wink Frozen Desserts will be able to develop without the help of the Sharks.