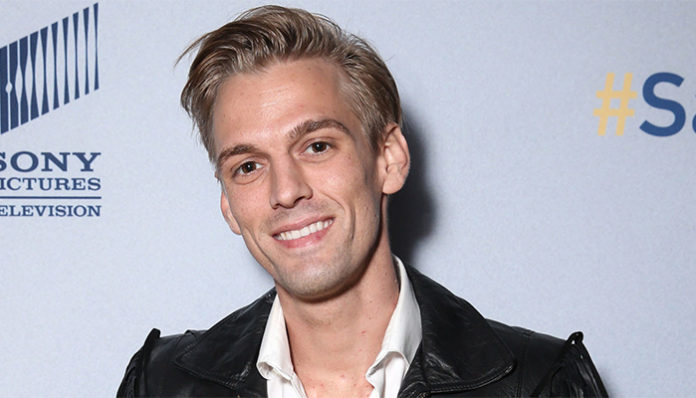 Aaron Carter is an American singer who first rose to fame as a teen idol in the early 2000’s. The younger brother of Nick Carter of the Backstreet Boys fame, Carter grew up exposed to and surrounded by musicーsomething which soon developed into an interest. Recognized for his singing talents at a young age, he later began his musical career at the age of seven, performing for a band known as Dead End. Carrying on with his vocal performances over the years, it wasn’t long until he was offered a recording contract at the age of ten. Carter subsequently released his eponymous debut album in 1997 under Edel Records; he later followed up with a second album release in 2000. Quickly winning over thousands with his voice, he soon became one of the most well-known teen icons by the late 90’s.

Since he first step foot into the music industry, Carter has released four full-length albums, twenty-one singles and four DVDS; his best-selling album to date remains to be Aaron’s Party (Come Get It), which has since received 3x Platinum certification in the US. A star amongst teen audiences, he has embarked on a series of tours around the world throughout his careerーhis most recent being that of Aaron Carter’s Wonderful World Tour in 2014. As a music artist with over ten million record sales under his belt, Carter has received much recognition for his work. At the age of fourteen, he won a Kids’ Choice Award for Favourite Rising Star for his hit album, Aaron’s Party (Come Get It) as well as a Teen Choice Award for “Male Artist of the Year”. The following year, he also won a Radio Disney Music Award for “Best Male Artist.”

On top of being a successful recording artist, Carter has also appeared several times on television as an actor. Although his first appearance on the small screen was in that of a 1998 children’s game show, he didn’t make his official acting debut until 2001 when he made a cameo appearance in the teen sitcom, Lizzie Mcguire. Over the next few years in the early 2000’s, Carter continued to land minor roles in various series including Sabrina the Teenage Witch (2001), 48 Hours Mystery (2002), Liberty’s Kids (2002), Family Affair (2003) and 7th Heaven (2004) to name a few. However having said that, acting’s not the only thing that has earned him some onscreen time, Carter has also participated in multiple reality shows such as America’s Most Talented Kids (2003), Rachael vs Guy: Celebrity Cook Off (2012) and Best Ink (2012).

So what has the former teen idol been up to nowadays now that he’s in his late twenties? Does he still record music at the studio or is that a thing of the past? What happened to Aaron Carter? Where is he now in 2018? 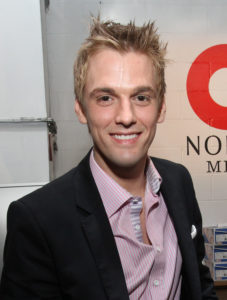 Born on December 7, 1987, in Tampa Florida, Aaron Charles Carter is the son of Robert Gene and Jane Elizabeth Carter, who ran a retirement home. The younger brother of Backstreet Boys member, Nick Carter, he also had three sisters B.J., Angel and Leslie, the last of whom passed away in 2012. Growing up in Florida, Carter spent the first decade of his life living in the Tampa Bay area with his siblings; the family had moved there from Jamestown, New York, shortly after his birth. As a young boy, Carter was always one for dancing and singing. When he was two years old, he began to sing to his favourite songs on the radio. With his musical talents hard to miss, he soon landed a gig at the age of seven, singing for a local band called Dead End as their lead vocalist; he continued to perform with the group for two years until he was nine.

With encouragement from his older Brother Nick, a member of the famed Backstreet Boys, Carter soon made up his mind about pursuing a solo music career. Closing the distance between himself and his new ambition, Carter began to undergo intensive voice training. With help from his brother and the popular boy band which he was a part of, Carter was later given an opportunity to perform a song at a Backstreet Boys concertーan event which gave the young musician much needed exposure at the time. As luck would have it, almost immediately after the performance, Carter was offered a recording contract with the Edel Recording Company by an executive who happened to witness his singing onstage. 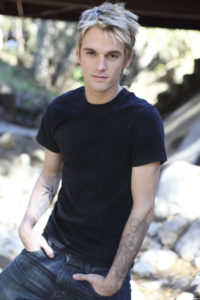 At the age of ten, Carter released his debut studio album, the self-titled Aaron Carter in December 1998. Produced by Johnny Wright, Veit Renn and Gary Carolla, the album saw much commercial success despite its rather mediocre reviews from contemporary critics. Featuring thirteen songs, one of which was Crazy Little Party Girl which was eventually released as a hit single, Aaron Carter made its way on to the seventh position on the US Top Heatseekers Album Chart. A fan favourite in many other countries, it also charted in Taiwan, Norway, Canada, Germany, the list goes on. Besides the aforementioned single, three other songs were also later independently released including Crush On You, I’m Gonna Miss You Forever and Surfin’ USA. Since its initial release, the album has sold over on million copies world wide.

Three years after his debut work, he released his best-selling album to date, Aaron’s Party (Come Get It). His first record with the Jive label, it featured over a dozen pop and hip hop tracks, including Aaron’s Party (Come Get It), which has since become his most successful single in the country. Although it was met with mixed reviews, similar to his earlier effort, it was immensely popular amongst fans, in particular with teens. More of a sensation than his first album, it climbed up to number four on the Billboard 200ーa large feat for the artist, who was only thirteen at the time. To promote the album, Carter also embarked on a tour coined the Aaron’s Party Tour in the summer of 2001.

Following the success of Aaron’s Party (Come Get It), Carter released his third full-length album entitled, Oh Aaron in August 2001. Although it wasn’t as big of a hit compared to his earlier breakthrough, it still found much success in his native United States, selling over 130,000 copies during the first week of release. Featuring an eleven-song track list, three of which were collaborations with No Secrets and his older brother Nick Carter, the album peaked at number seven on the Billboard 200 Chart shortly after its release; it also managed to reach number seventy-three on the Japanese Albums chart. His second RIAA certified album, Oh Aaron has since sold over one million copies across the country, earning it Platinum status.

The next year, the young singer released his fourth studio album, Another Earthquake! in September 2002. While it received much more favourable reviews from critics, it only fared so-so on the charts, debuting at number eighteen on the Billboard 200 briefly before falling down to number forty-one during the second week. His final album with Jive Records, its disc included thirteen tracks one of which was Summertime, a song eventually used in the Disney original movie, The Even Stevens Movie. Another Earthquake! sold approximately 41,000 weeks during the initial week and eventually saw a further 20,000 copies in sales during the second week, bringing its first month sales to over sixty thousand. 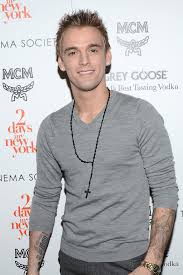 Since the release of his last studio album back in 2003, Carter has taken a back seat in recording (although he’s still been active with his tours) to appear in a number of minor roles on television and film. In 2002, he lent his voice to Joseph Plumb Martin, one of the characters in the animated historical series Liberty’s Kids. Produced by DIC Entertainment, the show first premiered in September 2002 with aims of educating younger audiences about the origins and history of their country, the United States of America. Every episode, a story about a historical event is toldーfrom the Boston Tea Party to the Constitutional Convention. The winner of two Daytime Emmy Award nominations, Liberty’s Kids continued for forty episodes before coming to an end in April 2003.

A few years later in 2006, Carter starred in the reality documentary series, House of Carters, which according to the official synopsis, focused on Nick Carter, member of the Backstreet boys and his siblings.  Premiered on the E! Cable Network that October, the show followed the Carter family as they tried to reconnect while trying to live out their lives in their new careers. Besides Nick and Aaron, Leslie, Angel and B.J. also starred on the series. Featuring an opening theme song by none other than Nick Carter himself, House of Carters went on for eight seasons until its final episode in November 2006.

During that same time, the former teen idol also appeared in various films such as Ella Enchanted (2004), Pop Star (2005), Supercross (2005) and I Want Someone to Eat Cheese With (2006). In 2014, he also took part in a second reality series revolving around his brother Nick, I Heart Nick Carter. 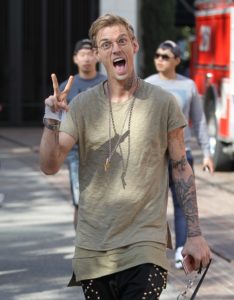 After a prolonged break from music recording, Carter released a new single entitled, Fool’s Gold in April 2016. Regarded by some to be his comeback single, Fool’s Gold will also be one of the many songs to be included in his new upcoming fifth studio album, LØVË. Initially announced in 2015, a music video directed in part by the singer himself was later released; since it was originally uploaded onto the artist’s Youtube VEVO page, it has been viewed well over 760,000 times by fans around the world!

In other news, Carter made the headlines after allegedly taking back his support for Republican nominee Donald Trump, after having originally displayed support for the presidential hopeful earlier this year. According to a tweet by the singer, he will not be voting for Donald Trump, citing that “its just something that [he] can’t take part in.” In another tweet posted by Carter on October 11, 2016, he stated that “[He] will not be supporting Donald Trump Anymore.” Although the exact reasons behind the change in opinion is unknown, its noteworthy enough to say that the announcement came after a video of Trump was leaked onto the internet, one in which he was heard making rather vulgar comments about women.

If you’re a long-time fan of the hip hop singer, you’ll be glad to know that you can stay connected with Aaron Carter on social mediaーyou can find the star’s online presence both on Twitter (@aaroncarter) as well as on Instagram (@aaroncarter). While you’re at it, it might also be a good idea to check out his official Facebook Page as well for some of the latest news!