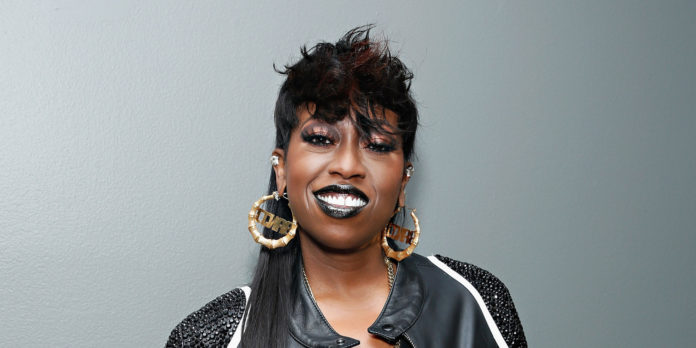 Missy Elliott is an American R&B singer who first broke out into the entertainment scene as a member of Sista, an all-female hip hop group in the 1990’s. Born into a music loving family, the dark-skinned beauty grew up with singing being a large part of her life. With her eyes focused on becoming a musician, she eventually formed the R&B girl group, Sista. Although it never panned out quite as she had imagined (financial troubles had resulted in a lack of album releases), another opportunity presented itself shortly afterwardsーone where Elliott began a solo music career after signing a record deal with Elektra Records as an independent artist. Chasing her dreams, she released her debut album entitled, Supa Dupa Fly at the age of twenty six. An incredible hit, the record was quickly followed by another, Da Real World in 1999ー which also proved to be a commercial success. Since then, the artist has recorded six full-length albums, seventy two singles, and has taken part in more than a dozen tours around the country.

Having taken the industry by storm, Elliot is one of the most decorated and highly thought of musicians in the world. Her awards cabinet is nothing to scoff at; so far, she has received well over seventy awards throughout her two decade-long (and counting) career. Her collection currently boasts five Grammy Awards, five BET Awards, twelve MTV Video Music Awards, twenty ASCAP Rhythm & Soul Awards, eight Soul Train Lady of Soul Awards, in addition to numerous others. Also noteworthy is the fact that she is the first female R&B artist to be the recipient of the VIVA Comet Media Award for the category of “Best International Video” (which she had won for her debut single, Supa Dupa Fly). To date, she has sold over 30 million records worldwide.

While you may know Missy Elliott for her famed tunes, did you know that she has also dipped her feet briefly into acting in the past? At the age of twenty two, the rapper made her debut on television in Raven Symone’s music video, That’s What Little Girls Are Made Of. Half a decade later, she appeared in the relatively unknown video short, Total: Trippin. Some of her other projects on the small screen include Breaking Out: The Alcatraz Concert (1998), Springbling Beach Towel Throwdown (2001), Pootie Tang and (2001). In 2005, the music artist also starred in her very own television series, The Road to Stardom with Missy Elliott.

So what has the female rapper, whom we’ve all grown to love, been up to nowadays? What direction has her career as a professional singer brought her these past years? What happened to Missy Elliott? Where is she now in 2018? 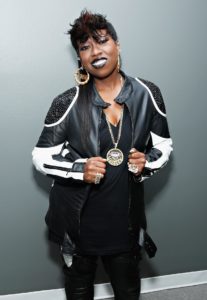 Born on July 1, 1971, in Portsmouth, Virginia, Missy Elliott (Birth Name: Melissa Arnette Elliott) is the daughter of Ronnie and Patricia Elliott, a former US Marine and a dispatcher for a power company respectively. Growing up as the only child of the family, Elliott was an active member of her local church and was also a part of their choir; as so, singing had become a major part of her life ever since she was young. By the time she was four in the mid 70’s, the natural performer had already decided that she wanted to be a professional singer. During the early part of her childhood, her and her family lived in the city of Jacksonville, North Carolina due to her father’s work in the Navy. While there, she made many friends in school although she wasn’t quite as interested in her classes. However having said, she was by no means a bad student, in actuality it was quite the opposite; she earned grades well above that of the class average and she also managed to skip two years ahead in school work. After her father finished his time with the Marines, Elliott and her parents eventually relocated back to her native Virginia.

Living in poverty, Elliott faced many hardships in her life as a teen; issues of domestic abuse had begun to arise in the home with her father being the perpetrator. She later recalled how one night, she had been reluctant to return home after staying over at a friend’s, for she was afraid of finding her mother dead back in the house. In one particular vivid episode, her father Ronnie, had throated her with a gun while dislocating her mother’s shoulder. When Elliott was fourteen, her mother had enough; together, the two fled his violent and abusive ways under the pre tense that they were going for a ride on a local bus. The pair soon arrived at a relative’s home; Elliott has stated at one point in time, that she had been extremely scared about her father coming after them for leaving him. With the troublesome past with her father behind her, she enrolled at Woodrow Wilson High School, where she later graduated from in 1990.

Revisiting her musical interests a few years into the 90’s, Elliott soon founded a R&B singing group which would later be known as Sista. Consisting of all female members, the aspiring vocalist and her friends quickly began to work on various demo tracks, with Timothy Mosley, a neighborhood friend acting as their producer. In a series of events, the members of Sista soon moved to New York City, where they eventually signed a recording contract with Elektra Records; in 1993, the group released their debut single entitled, Brand New. However despite their promising start, Sista later split up by the end of 1995. After going their separate ways, Elliott began to write songs with Timbaland as a team; together the two ended up contributing nine tracks for music artist, Aaliyah. Not long after that, the dark skinned beauty signed a contract with the Elektra Group, under their division East West Records. 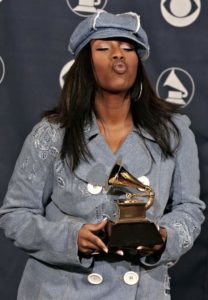 In the summer of 1997, Missy Elliott released his debut studio album, Supa Dupa Fly. Produced by her long time friend Timbaland, it contained a mix of hip hop, soul and alternative hip hop amongst its seventeen tracks; several of the songs featured different fellow artists, including Busta Rhymes, Da Brat, Ginuwine, Aaliyah and a few others. Having received critical acclaim from critics upon its release, Elliott received much praise for her songwriting and singing, eventually becoming one of the most prominent female rappers at the time. Recognized for redefining the R&B and hip hop genres, Supa Dupa Fly entered the US Chart at number three and sold close to 129,000 units during the initial week; it later peaked at number one on the Bill Top R&B and Hip Hop Chart. As of 2008, it has received Platinum Certification frm the RIAA for having sold over 1 million copies.

A couple of years later, the now well-recoginized singer, released her second studio album entitled, Da Real World in June 1999. Noted for being much darker than her debut work, the album showcased seventeen different tracks, all of which were produced by Timbaland. A success similar to Supa Dupa Fly, the album was considered a strong follow-up to her first record and was described by critics as being “a few steps in several right directions.” Overwhelmed once again with positive reception, Da Real World climbed up to number ten on the US Billboard 200; it also charted in many other countries including UK, France and Germany. The album eventually spawned three singlesーShe’s a Bitch, All n My Grill and Hot Boyz (Remix). As of 2015, the album has reached sales of over 1 million copies within the US alone; it has since been certified Platinum by the RIAA. 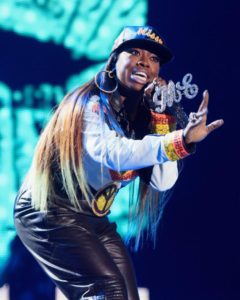 It wasn’t until a year after the new millennium that the artist released her third studio album, Miss E…So Addictive. Widely acclaimed, the album contained sixteen songs, all of which were produced in part by Elliott herself. Recognized for its content and lyrics, it topped the Top R&B Chart and took the number two position on the Billboard 200. Holding a score of 89/100 from Metacritic, Miss E..So Addictive has also been listed as “One of the Best 50 Albums of 2001” by the Q Magazine. Her fifth Platinum Certified album, it later spawned five singles, including the hit One Minute Man, which featured Ludacris. To date, Miss E…So Addictive has sold over 1.7 million copies.

In 2002, Miss Eliott released her best-selling album to date, Under Construction. Hailed to be one of the artist’s greatest works, it garnered close to perfect scores from many critics, including a four and a half star rating from Allmusic. A huge sensation, the album quickly sold over 250,000 units within the first week; it later peaked at number two and number three on the Top R&B and Hip Hop Chart and Billboard 200 respectively, shortly after its release. The album eventually saw three single releases: Work It, Gossip Folks and Back in the Day. Having earned Elliott two grammy Award nominations, more than 2 million sales have since been seen within the US.

Over the next two years, she released two more full-length albumsーThis Is Not a Test! in 2003 and The Cookbook in 2005. Of the two, the former was significantly more successful sales wise; it sold over 700,000 copies to date and has received Platinum accreditation from the RIAA. 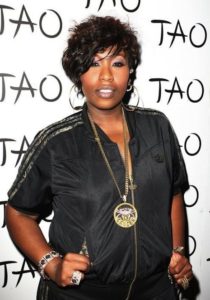 In September 2016, an announcement was made that Missy Elliott, alongside fellow musicians St. Vincent and Courtney Love were going to star in a new music video as part of a new campaign for designer, Marc Jacobs. Directed by Hype Williams, the video will feature Man Friday’s, Love Honey, Love Heartache (Larry Levan Mix) while showcasing Jacob’s new fashion line for the fall. According to sources, big names Susan Sarandon, Cara Delevingne and Marilyn Manson will also be making appearances in the MV.

A big earlier in July, Missy Elliott was also honoured at the 2016 VH1 Hip Hop Honors Ceremony in New York for her musical contributions to the genre. First established back in 2004, the annual ceremony honours “golden age and old school hip-hop rappers” at the Hammerstein Ballroom located in Manhattan. Although the ceremony was temporarily halted after 2010, it was resumed and brought back in 2016 after six years. The event hosted by Eve, aired on television on July 11, 2016 and featured the singer as she joined fellow recording artists, Queen Latifah, Salt-N-Pepa and Lil’Kim up on the stage as an honouree.

If you’d like to stay informed about the happenings around the star, you can do so simply by following her on social mediaーyou can find Missy Elliott active on both her Instagram (@missymisdemeanorelliott) and Twitter (@MissyElliott) accounts. Don’t forget to drop by her official website (missy-elliott.com) as well as her Facebook page as well, if you’re a fan!