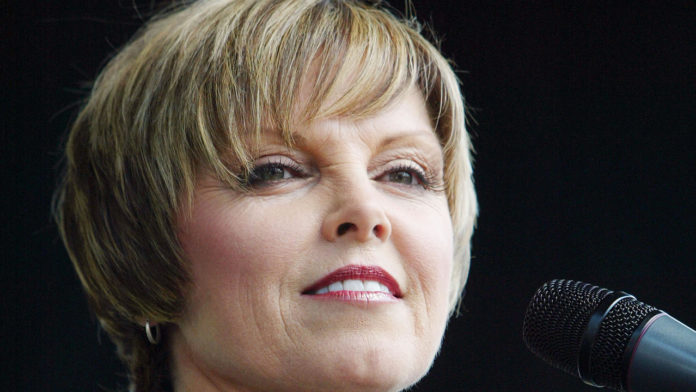 Known for her hits Love Is a Battlefield and Hit Me With Your Best Shot, American singer Pat Benetar first broke into the American music scene in the early 1980’s. Captivated by the idea of performing ever since she was a young girl, Benetar sang her first solo at the age of eight at a school concert. Known for her stunning soprano vocals, almost everyone around her expected Benetar to attend the prestigious Juilliard School; however to their surprise, she eventually decided to pursue an education in health. After working at a bank briefly however, her passion in music was once again reignited and she soon found herself performing a number of gigs at various local clubs. Following a few years of that routine, she later landed a spot with the New York comedy club, Catching a Rising Starーit was while she was working with them that she ultimately scored a recording deal with Chrysalis Records.

Not long after that, Benetar released her first studio album, In the Heat of the Night in 1979. A successful debut, the singer dazzled thousands of listeners with her vocal performanceーfrom there, her popularity  only went in one direction, up. Since her entrance into the industry, Benetar has released thirty-six singles, thirty-two music videos, and close to a dozen studio albums. To date, she has sold more than 25,000,000 albums globally. Considering her accomplishments as a professional singer, it’s not startling that she has also accumulated many awards over the years. A four-time (consecutive) Grammy Award winner, Benetar has also received three American Music Awards and a People’s Choice Award. Throughout her career, she has produced ten RIAA-certified albums and a handful of top ten hits including Invincible and We Belong.

However music credits aren’t the only things that Benetar has in her nameーshe has also acted briefly on television as well. Since she first appeared on the small screen in the comedy drama, Union City in 1980, the singer has made multiple guest appearances on the TV series in ABC Afterschool Specials (1989), Family Law (2001) and Charmed (2003). On top of song-writing, Benetar has also put pen to paper in writing a bookーa memoir more specifically, called Between a Heart and a Rock Place. Released in the summer of 2010, the memoir chronicled the difficulties which she’s had to go through in both her personal life and professional career.

One has to wonder though, what has she been up to these last couple of years? Has Benatar retired at age sixty-three or is she still going strong with her music? What happened to Pat Benatar? Where is she now in 2018? 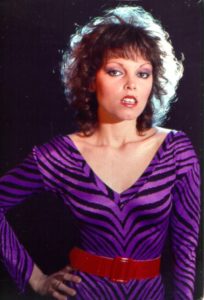 Born on January 10, 1953, in Brooklyn, New York, Pat Benatar (Birth name: Patricia Mae Andrzejewski) is the daughter of Andrew and Mildred Andrzejewski, a worker at a sheet metal factory and a beautician respectively; she is of German, Irish, English and Polish descent from both sides of her family. Growing up in the small village of Lindenhurst, Long Island, Benatar developed an ear for music at a young age, possibly due to the fact that her mother was also a trained opera singer. Enthralled with both singing and theatre, Benatar sang often as a girl and eventually got her first solo in a school concert at Daniel Street Elementary School, where she was a student. Holding an unwavering interest in music, she later took part in a musical production as a teen at Lindenhurst Senior High School, portraying the role of Queen Guinevere in the play Camelot. A talented songbird, Benatar also sang at annual Christmas ceremonies as well as for her school choir.

After graduating from high school, it was within everyone’s expectations that Benatar was going to be attending Juilliard to further her musical studies. But in a surprising twist, the singer went on to enroll at State University of New York at Stony Brook to study health education; she later dropped out of her classes to marry her high school sweetheart, Dennis Benetar. While her husband served in the Army, she worked as a bank teller in Richmond, Virginia. The job did not last that long howeverーBenatar’s musical passion was soon rekindled after she attended a Liza Minnelli concert in 1971. Departing from the bank, she eventually landed a position in the comedy club, Catch a Rising Star. With her talent hard to miss, Benatar quickly caught the attention of a music producer during a performance, who impressed by her abilities, signed her on to Chrysalis Records. 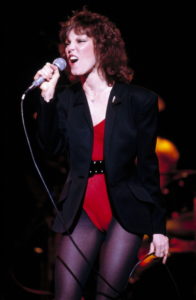 Officially a recording artist, Benatar released her debut album entitled, In the Heat of the Night in August 1979. Created in collaboration with music producers Mike Chapman and Peter Coleman, the album contained a two sided disc with ten rock tracks; out of them, a number were covers including I Need a Lover by John Cougar, If You Think You Know How to Love Me by Smokie, and Don’t Let It Show by The Alan Parsons Project. Described as “an impressive debut” by critics, In the Heat of the Night was a commercial success; it peaked at number twelve on the Billboard 200 and also made its way into the top ten in both Canada and New Zealand where it reached number three and number eight respectively. Three singles were spawned from the album, If You Think You Know How to Love Me, We Live for Love/I Need a Lover and Heartbreaker/My Clone Sleeps.

Rising in popularity by the end of the 90’s, the rock singer released her second studio album, Crimes of Passion in the summer of 1980. Produced by Keith Olsen, the album was also Benetar’s first record to feature drummer Myron Grombacher. Her best-performing record to date, Crimes of Passion entered the US Billboard 200 at number twoーa position which it held for five weeks. Applauded for its power pop songs and ballads, it featured the eventual hits You Better Run, Treat Me Right and Hit Me with Your Best Shot. A powerful follow-up to her debut effort, Crimes of Passion later earned Benatar her first Grammy Award for the category of “Best Female Rock Vocal Performance” in 1981. Her second RIAA certified album, it has since sold over five million copies in the US alone, garnering it 4x Platinum status.

Following in the success of her second record, Benatar released her next full-length album, Precious Time in July 1981ーit was her first studio album to reach number one on the Billboard 200. Although it was met with mixed reviews upon its release, it was another hit for the singer, who had now cemented her place in the music industry. Recorded in two separate studios in Los Angeles, Precious Time featured nine tracks including Just Like Me and Helter Skelter, which were covers of Paul Revere & The Raiders’ and The Beatles’ earlier singles. Critically acclaimed, the album later saw the release of two songsーFire and Ice and Promises in the Dark; the lead single, Fire and Ice eventually won the artist a second Grammy Award for “Best Female Rock Vocal Performance” the next year. As of 1984, the album has been certified 2x Platinum for achieving over two million sales.

Continuing on with her recording at the studio, the singer went on to released her fourth album entitled, Get Nervous in November 1982. Entering the Billboard 200 at number four, it eventually stayed in that position for period of forty-six weeks. Similar to her earlier albums, Get Nervous was well received amongst fans and critics and currently holds a four out of five star rating from both Rolling Stone and Allmusic. Amongst its ten tracks, a few stood out including Little Too Late, Looking for a Stranger and Shadows of the Night, the last of which garnered the artist yet another Grammy for “Best Female Rock Vocal Performance.” Her first Platinum certified album in the US, Get Nervous has since sold more than a million copies within the country. 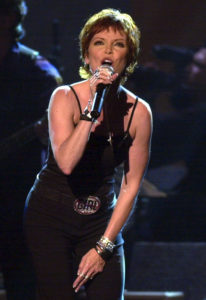 Throughout the rest of the 80’s at the peak of her career, Benetar released a series of albums including Live from Earth (1983), Tropico (1984), Seven the Hard Way (1985) and Wide Awake in Dreamland (1988). All highly successful, over three million copies of the albums have been sold combined to date. Despite her popularity in the 80’s however, the artist’s records soon fell into the category of “lukewarm successes at best” by the early 90’s; her last RIAA certified-album was Wide Awake in Dreamland in 1988.

In the spring of 1991, the artist released her best performing album of the 90’sーTrue Love. In contrast to her earlier efforts, the album stepped away from her usual rock style music and gravitated more towards jump blues sounds. Despite its fresh sounding tracks however, True Love was only mildy successful compared to her earlier releases from the 80’s. Having said this, the album did chart at number thirty seven on the  US Billboard 200 and reached over 330,000 copies in sales. Two other albums were released in the 90’s including Gravity’s Rainbow (1993) and Innamorata (1997). Benetar’s most recent album is Go which she released in August of 2003. 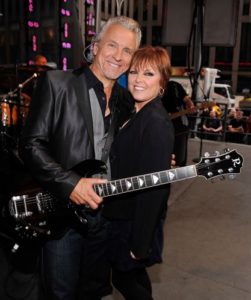 In March 2016, announcements were made that Benetar will be co-headlining a tour with fellow musician and long-time husband, Neil Giraldo and rock singer, Melissa Etheridge this summer. For the couple, it was a nice return to the stage after a successful tour in 2015, which also served as a celebratory event for their 35th anniversary. The trio’s 2016 Summer Tour began in early July 2016 in New York and took the artists to multiple cities and destinations before ending in Airway Heights, Washington on August 27, 2016. Don’t worry if you weren’t able to attend those performances though, she still has a few upcoming shows coming up in Novemberーif you’re interested, make sure you check out Benetar’s official website for more information!

While Benetar has been busy with her tour the last few months, she hasn’t neglected her schedule for the next year−in fact, rumour has it that the artist actually has a Broadway musical production in the works for 2018. While no further details has been revealed yet, it’s fair to assume that this project will be a big one for the star, who hasn’t released any major records since the early 2000’s. According to Deadline.com, the production will also involve her husband, Neil Giraldoーbut that really isn’t all too surprising considering how long the two have been together with their music!

If you’re a fan of the soprano singer, why not give her a follow as a means of keeping up-to-date with her happenings? You can find Pat Benatar on Instagram and Twitter under the same username, @benatargiraldo. It might also be a good idea to drop by her official Facebook page and website (benatargiraldo.com) for some of her latest news!