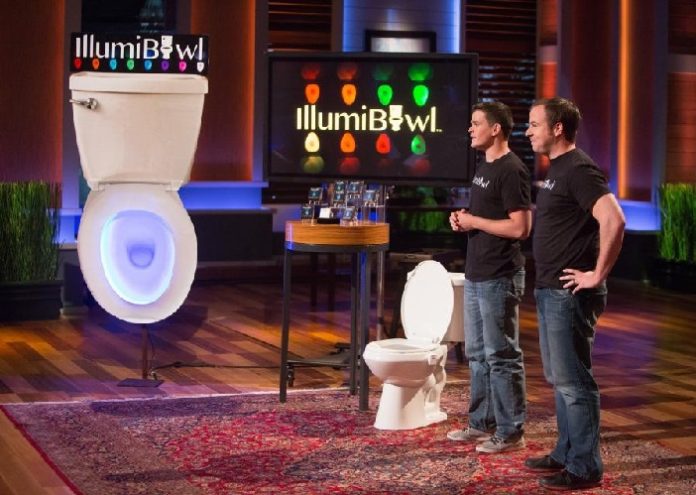 IllumiBowl founder Matt Alexander had always wanted to be an entrepreneur, but he never seemed to find that ideal light bulb moment when a superb business idea came into his head. Eventually it was an all too common situation that lit up his entrepreneurial ambitions and led him to the Shark Tank.

The Brigham Young University student, who was studying entrepreneurship at the time, was always drinking a lot of water, and that inevitably resulted in plenty of trips to the bathroom at night. He would often find himself stumbling around trying to find his way before he finally turned on a blinding bathroom light and completely shook himself out of his sleep cycle. He finally hatched a plan to develop a floor mat that would light up when it was stepped on, so users could see in the bathroom at night. He mentioned the idea to his brother-in-law, Michael Kannely, who provided the ingenious suggestion of simply attaching the light to a toilet bowl. Matt and Michael looked for a similar product but found there was nothing like it already on the market, so they began designing a prototype.

The pair also discovered that there was a huge potential demand for their product, as late-night stumbling trips to the bathroom were something that many people experienced on a regular basis, so they eventually turned to the crowd-funding site Kickstarter to fund their first production run. Even though the pair were broke college students, they extensively studied previously successful Kickstarter campaigns until they believed they had compiled a winning proposal. Their hard work and preparations seemed to do the trick. With no budget for promotion or marketing the pair managed to far exceed their funding goal of $20,000 during the month long campaign, that took place in October 2014, eventually receiving almost $100,000 from over 3,000 backers.

With the investment from their Kickstarter campaign the pair then completed their prototype Illumibowl and began fulfilling the pre-orders from their backers, but in order to grow even further, they required more funding, and when Shark Tank producers noticed the Kickstarter campaign they were impressed enough with the concept of the IllumiBowl to invite the entrepreneurial pair onto the show.

When Matt and Michael appeared on series 7 of Shark Tank, in March 2016, they were looking for a $100,000 investment, and the much needed help of a Shark to help them get into big retail stores, and they were offering 15% equity in the business in exchange.

Matt began the pitch by describing those difficult night-time bathroom trips, and the process that had led him to ultimately develop the IllumiBowl product. He explained that it was a motion-activated toilet bowl light that would ultimately lead you in the right direction. It was a cool decorative addition to any bathroom too, and would improve the look of any properties smallest room. Michael finished up by asserting that the IllumiBowl business had only two priorities, number one, and… number two. The Sharks groaned dutifully, but they didn’t seem too surprised, there was almost certainly going to be at least one toilet based joke involved in the pitch somewhere.

The Pitch had gone reasonably well, the IllumiBowl light certainly looked cool, and Matt had perfectly described how useful it would be to many customers, but Robert Herjavec inquired why people wouldn’t just use a night light instead. Matt explained that not only was their light particularly dim, and far more suited to sleepy eyes that hadn’t adjusted to the light, but it was also motion activated, and didn’t need to be left on when it wasn’t needed. He once again emphasized quite what a stylish addition it was to a bathroom, and of course most importantly it was a fun product.

Kevin O’Leary had only one slight concern, ‘There’s no chance of an electric shock is there?’ he asked, slightly concerned, but Michael was quick to confirm that there was absolutely no chance of that occurring. Kevin uncrossed his legs and looked relieved.

The subject of funding came up, and Matt explained about the Kickstarter campaign that had launched the IllumiBowl business. He told the impressed looking sharks about the huge support they had received from the crowd funding community and revealed the $100,000 in pre-sales orders that had been placed.

At that point, part of the IllumiBowl display suddenly collapsed, and just for a moment a giant cardboard toilet seemed to be falling directly on top of Robert Herjavec, which was an unexpected development to say the least. Fortunately Robert was spared an injury, and after the inevitable bouts of laughter had finally subsided, he remarked ‘That was scary’. ‘We’re bringing down the house’ joked Michael.

Robert asked what the strategy for future sales was, did the pair plan on moving into retail stores? Matt asserted that although they had not reached that stage yet, it was their intention for the future. They would be launching the illumiBowl online in a few weeks time and had plans to approach as many retailers as possible in the future. They were hoping to secure a meeting with the Illinois based cooperative Ace hardware, which operates over 4,800 locations nationwide, but Matt hinted how much easier it would be to come to the attention of big retailers like Ace with the help of a Shark partner.

Matt told the Sharks about another plan the pair had for a future product. They hoped to be able to develop an IllumiBowl light that would be able to project an image into the toilet. To demonstrate the concept they showed a picture of a toilet with the smiling features of Kevin O’Leary inside, all bathed in a soft blue light. The sharks exploded into laughter and Mr Wonderful was no exception. Kevin certainly didn’t seem too offended by the slightly insulting suggestion that people might want to take ‘aim’ at him. Mark Cuban loved the concept, he joked ‘I’m in, I’m in’.

When that round of laughter, and the slightly crude digs at Kevin, such as Daymond John suggesting ‘Aim for the mouth’, had finally diminished, Lori turned the subject back to business. She queried the huge demand that Matt had asserted was present for the IllumiBowl, and asked how the pair could be so sure that the product would be so popular. Matt re-iterated that the IllumiBowl was highly functional, fairly inexpensive, stylish and fun, and he explained that his extensive research into the size of the potential market had indicated that millions of units could be sold, with the right strategy and the right partner.

Daymond John admired Matt and Michael’s strategy of reaching for ‘affordable’ next steps for the IllumiBowl business, but he explained that the pair didn’t really need the help of a shark to achieve that next step, and for that reason he was out.

Kevin O’Leary however was far more interested, and he had some unexpected good news for the entrepreneurs. Its two guys with a toilet bowl light he summarized, but continued with ‘Its kind of nuts but I like it’. To the obvious pleasure of the IllumiBowl entrepreneurs, Kevin offered the $100,000 investment the pair were looking for, but in exchange for 25% equity in the business.

The entrepreneurs smiled at the positive reception from Mr Wonderful, and Mark Cuban quickly dropped out, uninterested in making a second offer. Robert Herjavec admitted that he wouldn’t improve on Kevin’s offer and he was out too, but he asserted that the pair would do well to accept an offer from a Shark that people associated with toilets. Kevin refused to rise to the jibe, merely smiling as the competition decreased. Lori admitted that the IllumiBowl was interesting, but also felt that her involvement with Squatty Potty, one of her previous Shark Tank investments, left her with a conflict of interests, and due to that she was out too.

Matt asked Kevin if he would be prepared to meet halfway, and supply $100,000 for 20% equity, but Kevin was unwilling to amend his offer. Matt and Michael had a quick whispered discussion and eventually announced to Kevin ‘You’ve got a deal’. The New partners shook on it, and Kevin proudly announced to his fellow sharks ‘I’m going to light up America’s toilets’, as his new partners left the tank.

IllumiBowl Now in 2018 – The After Shark Tank Update

The boys from IllumiBowl gave the Sharks a few laughs, and in the case of Robert Herjavec, a brief moment of fright, but most importantly they gained a valuable partner in Kevin O’Leary, and the IllumiBowl business has made several important strides since the segment first aired. The IllumiBowl was taken on by several large retailers soon after filming, and with Kevin O’Leary’s considerable influence, the business managed to get its units stocked in Ace hardware, True Value, and Bed Bath & Beyond. The big box store in particular timed the release of IllumiBowl in its stores so that the product was launched on the same day the segment was first aired.

Matt and Michael have also been effusive in their praise of Kevin O’Leary. Matt credits his considerable involvement in the business as being vital in crucial retail negotiations, product development and marketing. He asserts that the company would never have experienced such a rapid period of growth without Kevin’s efforts.

The new partners have sold in excess of several hundred thousands units since the IllumiBowl segment first aired in March 2016, and demand for the innovative product has been ‘phenomenal’ nationwide, just as Matt and Michael’s initial research indicated it would be. The success of the business has been so great that the pair have now begun developing the next range of products, but exactly what they might be is being kept strictly under wraps for the moment.

Matt is keen to encourage other entrepreneurs to follow their dreams and go into business for themselves. He advises them that it has never been easier to learn everything you need to know from the vast wealth of business knowledge available online, and as he says ‘I went from a college student to the CEO of a million dollar business in a year’, and as far at Matt Alexander is concerned, If he can do it, anyone can do it. They are modest words indeed from an entrepreneur who really does deserve to feel flushed with his success in the Shark Tank, and in the enlightening business he founded.