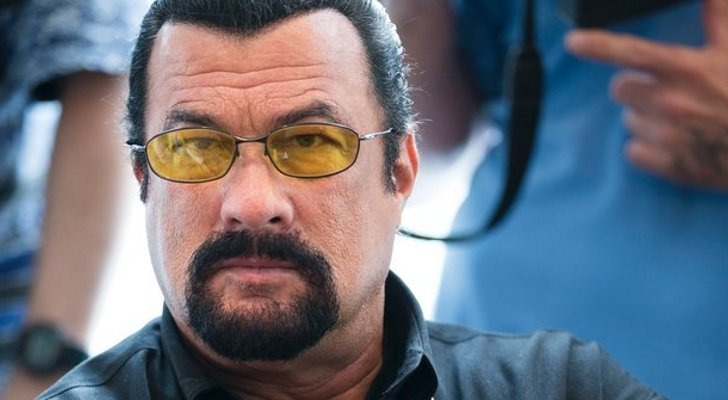 Steven Seagal is a celebrity who’s famous for his roles in numerous action films and direct-to-video flicks. Aside from that he’s also well-versed in aikido and has established dojos to train students with martial arts, not to mention establishing a blues band with two albums and tours in different countries.

You might be wondering what the tough guy is up to now or where in the world is he. Before we check out the latest regarding Steven Seagal, let’s take a trip down memory lane and witness his rise to stardom.

Steven Frederic Seagal was born on April 10, 1952, in the city of Lansing, Michigan. At five years of age his family moved to Fullerton, California where he finished high school but dropped out of college.

His interest in martial arts blossomed at an early age after witnessing an aikido demonstration. Seagal sought training from karate master Fumio Demura, and later on moved to Japan. He spent more than a decade in sharpening his skills in aikido under the tutelage of different teachers. His stay also allowed Seagal to learn Japanese and teach English.

Seagal went back home in 1974 where he met fellow aikidoka (an aikido practitioner) Miyako Fujitani. The two quickly became an item and got married the following year in Japan. Seagal had two children with Fujitani namely Kentaro (1975) and Ayako (1979). He also became an aikido instructor in the dojo owned by Fujitani’s family. In the 80s Seagal opened dojos in New Mexico and West Hollywood.

Seagal divorced with Fujitani after marrying actress Adrienne La Russa back in the United States. He was entangled in a string of affairs and divorces until he met Erdenetuya Batsukh, a Mongolian professional dancer, in 2001. The two got married in 2009 and she bore him a son in 2010 named Kunzang. In his past marriages Seagal had a total of seven children.

Seagal had also claimed that some of his students were actually connected to the Central Intelligence Agency, and said to have worked with the agency in a couple of operations including security work for former Egyptian president Anwar Sadat.

He also trained deputies from Jefferson Parish, Louisiana which connected Seagal with the sheriff Harry Lee. This led to Seagal’s inclusion in the force as a Reserve Deputy Chief and to the inception of his 2009 reality series Steven Seagal: Lawman. The show ran for two seasons until it ended with three episodes from its third season. Critical reception for the show was mediocre and the remaining five episodes for the third season are still unaired.

Steven Seagal in Movies and Music

Seagal’s dojos attracted students from different walks of life, including one of the heads of talent agency Creative Artists Agency namely Michael Ovitz. Ovitz eventually became close with Seagal and he arranged the latter to showcase an aikido demonstration in front of the Warner Brothers executives. With the explosive popularity of the action genre during that decade, the brass saw Seagal as an “action hero” material thanks to his impressive moves.

In 1988 Seagal starred in his film debut with Above the Law which he also wrote and produced. His three subsequent films in the early 90s namely Marked for Death, Hard to Kill, and Out for Justice further solidified Seagal’s name in the genre. Seagal starred in the critically-acclaimed 1992 thriller Under Siege which earned two nominations in the Academy Awards and made more than $156 million around the globe. The film had a sequel in 1995 titled Under Siege 2: Dark Territory but failed to replicate the critical success of its predecessor.

Seagal entered the realm of directing in 1994 with On Deadly Ground which he also starred in. Unfortunately it failed to earn back the $50 million budget and critics were not so kind with their reviews, not to mention winning Seagal a “Worst Director” Razzie with ten other nominations.

Seagal starred in action films that received lukewarm critical reception namely Glimmer Man (1996) and Fire Down Below (1997). In 1998 he starred in his first direct-to-video movie with The Patriot with his daughter Ayako Fujitani as part of the cast. It was perceived by critics as a “dull” film for having very few action scenes unlike Seagal’s earlier movies.

Throughout the next decade Seagal mostly starred in direct-to-video action films that feature lead characters who were mostly former agents or tough cops. Parts of his lifestyle were also usually integrated into his films like his religion, music, and his past as an aikido instructor. However most of these direct-to-video films were poorly received by critics. He did deviate from his norm of being a nigh-unstoppable good guy in the 2010 theatrical film Machete where he played an antagonist.

Seagal ventured into music in 2005 with his album Songs from the Crystal Cave. The songs feature a mix of genres ranging from blues to reggae with Seagal on lead vocals and guitar. It was followed with another album titled Mojo Priest the next year. Both of these albums were not favorable in the ears of critics. His supporting Mojo Priest tour ran from January to March 2007.

In 2010 the television series True Justice was aired with Seagal as its lead actor, creator, and executive producer. It lasted up to 2012 with 26 episodes in two seasons. During the same year he only had one direct-to-video film titled Maximum Conviction where he starred alongside WWE Hall of Famer “Stone Cold” Steve Austin. 2013 also saw only one Seagal direct-to-video film namely Force of Execution.

In 2014 Seagal and his blues band Thunderbox embarked on a “Blues Music Tour”.  He also starred in a direct-to-video film titled A Good Man and the theatrically-released Gutshot Straight. The next year Seagal again only had one direct-to-video film Mercenary: Absolution.

Let’s see what Steven Seagal is doing now this year.

Seagal starred in six films this year. He also has four upcoming films which may be released in late 2016 or in 2017.

Seagal was a guest in the 2016 World Nomad Games held in Kyrgyzstan from September 03 to 08. The action-packed event featured “ethnosports” like wrestling on a horse, archery, and eagle hunting. Seagal opened the games on horseback while donning medieval armor. He also played his music and showcased some aikido during the event.

In the past few months Seagal toured different territories which included Belarus and Chechnya. He’s also become quite close with Russian president Vladimir Putin. Earlier in 2016 he was granted citizenship in Serbia and there are reports that Seagal is considering applying for a Russian one. Recently Seagal planted a maple tree near a sports complex in the Russian region of Sakhalin which he touted as a “tree of friendship”.

Last March Seagal visited the Philippines as part of his “business trip” and a vacation.

Stay updated with Steven Seagal by checking out his Instagram (@seagal_official), Twitter (@sseagalofficial), and Facebook (sseagalofficial) accounts. You can also visit www.stevenseagal.com for official messages from the actor himself.