The NitroForce Titan 1000 Before Shark Tank

Frank Capatelli and Devrae Barrens are both personal trainers from Medina, Ohio. The two of them have come to the Shark Tank to seek an investment of $150,000 in exchange for 10% equity in their business, NitroForce Industries. NitroForce Industries is home to the safest, fastest, lightest, and most versatile, most affordable home gyms on the planet – of which, the very first model is the NitroForce Titan 1000.

Devrae explains that the two personal fitness trainers, her and Frank, have come up with more than 100 different exercises utilizing the NitroForce Titan 1000, but with some creativity, the sky is truly the limit. To demonstrate, Frank sets himself down on the machine and begins to work out his shoulders with the shoulder press. As Devrae explains, Frank turns around and then is in the perfect position to perform a squatting workout. They even have a leg press addon, but that is typically an upsell and is not included in most consumer packages. The two of them then remove the bench by simply removing a pin.

Devrae pulls out a simple-looking rod and explains that this rod is what powers the entirety of the NitroForce Titan 1000; the rod only weighs 2 pounds, yet offers up to 250 pounds of resistance. The gas-powered shocks are massless and have absolutely no weight, which is where the NitroForce Titan 1000 truly benefits. Continuing on with the elaborate demonstration, Frank explains that there are a couple extra sizes that can be added on. Frank then begins a barbell workout, having turned the singular bar into two split bars; the entire thing is an incredibly complex Transformer-like device. Frank then performs shrugs and a deadlift, showcasing just how versatile the NitroForce Titan 1000 is.

The NitroForce Titan 1000 on Shark Tank

Daymond looks rather lethargic as the complex demonstration continues; Devrae now explains that they will engage “pull-down” mode for the workout bench, which allows the two of them to attach a cable assembly. The entire process takes only about 30 seconds, and Mark jokingly asks if the two of them are going to show the Sharks all 100 exercises. Devrae affirms that this is their last demonstration. Frank then begins to work out with a rather violent thrusting motion, and Devrae explains that the motion is called “a bench punch;” fanatics of mixed martial arts would be extremely interested in this workout. Frank explains that he was using 30 pounds of resistance, despite looking like he was throwing rather quick punches at the bench.

Barb is the first Shark to get down to business; she asks if the display model is a prototype, or if it is a finished consumer piece. Devrae explains that it is a manufactured piece, of which they have about 90 units in a warehouse. Kevin asks if this means that they have no sales yet, and Devrae explains that they really have not tried. They have sold 26 NitroForce Titans at a price of $1299 each (net of $33,774 in sales), upon Daymond’s probing, which also included free shipping for the customer. Mark asks about the cost to build each unit, which Devrae estimates to be just south of $260.

Kevin then explains that they valued their business at $2.5 million dollars without any sales, but Frank explains that they do have sales, albeit weak ones. However, they have not performed any advertising, but have performed basic market research and testing since Frank felt they could easily make the company into something big. The manufacturer eased any of Frank’s fears and concerns, since they seemed professional. Kevin, however, remains unconvinced and simply asks, “where is the part where the company is worth $2.5 million dollars?”

Frank then points to the numerous patents, decorated with a ribbon to confirm their authenticity and control, and then explains that a lot of the value for the company would come from the intellectual property in the form of the patents. Barb returns to the sales dilemma and asks Frank if he had said that they had sales. Frank hesitates and says yes, and then confirms that they have only sold to 26 people. Mark then asks how much the two of them have invested total, and Devrae estimates about $200,000 between the two of them. However, the entire process has taken 8 years to get here.

Robert then asks about the endgame vision for Frank and Devrae, which Devrae explains that they would like to sell to consumers at home, instead of gyms or other areas involved with fitness. Robert then explains that 98% of all gym equipment sold in that market is never used more than once. Frank and Devrae acknowledge this and simply say, this is most likely due to the equipment not being appropriate for the user. No, Robert says, it is because people are lazy.

Kevin then says that the entire industry was born with Susan Summers and the thighmaster, and ever since then, the model has not changed; it takes a tremendous amount of capital to do a massive launch. At the end of the day, Kevin continues, you do not know until you have spent nearly $500,000 if you will stay afloat or not. Kevin is the first Shark out of the deal.

Mark then speaks next, asking who is the primary competition to the NitroForce Titan 1000. Kevin snarkily answers “every device out there,” but Frank explains that the NitroForce Titan 1000 has an advantage as it can penetrate the journeyman, professional, or intermediate workout enthusiasts; this is one advantage that their machine has that others do not have. Robert does not buy the answer and explains that when equipment is sold, that equipment gets sold to people like Kevin O’Leary; you need people like him, who never go to the gym. 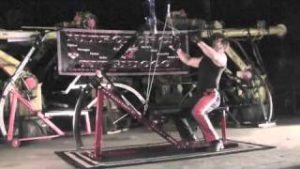 Barb says she cannot understand how the NitroForce Titan 1000 is different from any other machines out there, but Devrae explains that their machine relies on resistance, primarily through the use of shocks, to offer the same feeling as typical weightlifting machines. Weights will cause damage, and will hurt the tendons and joints of the user. On the NitroForce Titan 1000, the user will not get sore or have aches, which is a rather tall claim.

Daymond then says that it would cost $2 million to educate people to even start thinking and considering their machine, so he is the second Shark out. Mark then says that the general rule is that you cannot enter the Shark Tank searching for a $2.5 million evaluation without a proven distribution model, so Mark is also out of the deal.

Barb says that every time her husband goes on vacation, she hires 3 or 4 different handymen to come in and help her throw out all of his latest “acquisitions.” Barb explains that she could not think of anybody less likely to buy into the product than her, so Barb is the fourth Shark out of the deal. Only Robert remains.

Robert takes a moment to think before he speaks; typically on Shark Tank, Robert thinks of his wife and wonders to himself, “would my wife buy this?” In the case of the NitroForce Titan 1000, Robert feels that his wife would be a little too intimidated to buy the product; it’s too industrial, too expensive, too difficult, and it takes up too much space. These are too many “toos” for Robert to feel safe with investing in the NitroForce Titan 1000, so he is the final Shark out of the deal.

Before they exit the Shark Tank, Frank explains that he wants to put out a little statistic that is relevant to their appearance. In the history of direct response television, 11 products did more than $1 billion in sales, four of which were home gym machines. Still, Daymond shoos the two fitness fanatics out of the Shark Tank. Devrae and Frank are unbroken by their failure to secure an announcement and Devrae explains that they have a NitroForce Titan 1000 in their living room, so they will work to get one in every single living room.

As an Ohioan myself, upon hearing “Medina,” I swelled with pride. After googling “NitroForce Titan 1000,” some of that pride diminished into feelings of confusion and unwarranted rage. Now, the NitroForce retails for a more-unreasonable price of $1999, despite including almost no features or renovations from the model displayed on Shark Tank. In addition, the leg press attachment, a simple attachment of a plate and appropriate socketing, also retails for $50.

Despite the outrageous increase of retail prices (increase of 35%!), the NitroForce Titan 1000 still has a strong review of 3.8 stars across 4 reviews on Amazon. However, one troubling tidbit is the unavailability of the NitroForce Titan 1000; there is only 1 unit available on Amazon with no indication of more inventory arriving any time soon. I should also mention that this unit on Amazon is marked up from $2000 to $2,499 for no apparent reason.

Since the appearance of Nitro Industries on Shark Tank, it appears that Devrae and Frank have begun to branch out into the fitness world; now, a “Nitroswing” model is available (price unknown, as you must call and consult for a price), which uses primarily the same technology as the NitroForce Titan 1000. The Nitroswing relies on resistance instead of simple weights, just like the other model. The NitroSwing is primarily used for golfers and baseball players who want to improve on their swing, although without an elaborate model or demonstration, I am curious how this machine would work.

Nitro Industries has also released their “Nitroforce NitroPRO bars,” which I assume is a protein bar. A box of 24 are available for $35, which is really a subpar deal. The online shop for Nitro Industries also includes three potential replacement parts for the NitroForce Titan 1000, should you find yourself needing to repair it for whatever reason.

As an author’s anecdote, I feel as though the Nitro Industries company will not last much longer; they seem to be spreading themselves too thin, and since their appearance on Shark Tank, their only product on Amazon has almost doubled in price. The price wasn’t even that attractive to begin with, as more complex machines are available for prices under $1,000, and some even offer financing.