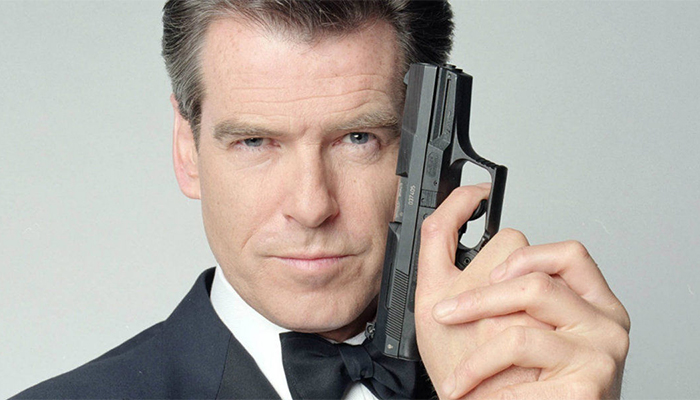 Pierce Brosnan is an Irish actor best known for his portrayal of James Bond in the British spy film series. Breaking out into the performing world in 1976 in a production of Wait Until Dark, Brosnan participated in a handful of stage plays before making his way onto both the big and small screens in the 80’s. Some of his early appearances in film include, The Long Good Friday (1980), The Mirror Crack’d (1980), Nomads (1986), Taffin (1987), The Fourth Protocol (1987) and The Deceivers (1988). Having simultaneously worked in television at the time, Brosnan also appeared in a variety of series including Hammer House of Horror (1980), Manions of America (1981), as well as Noble House (1988).

A few years after his acting debut, Brosnan landed a breakthrough role in the NBC drama, Remington Steele. Created by Michael Gleason and Robert butler, the series revolved around the cases taken by a female private detective (played by Stephanie Zimbalist) and her con-artist partner, Remington Steele (played by Brosnan).  Initially broadcast in October 1982, the series continued for over ninety episodes, eventually ending in April 1987 after a five year run. As the actor’s first lead role in a television show, Remington Steele would be significant in the launching of Brosnan’s career during the 1980’s.

Over the next decade, the actor continued to appear in numerous projects, including a handful of television films such as Murder 101 (1991), Victim of Love (1991), Death Train (1993) and The Broken Chain (1993). Rising to prominence, Brosnan was eventually cast as secret agent, James bond in the British spy movie series in 1995ーa role which he’d ultimately reprise throughout the years in a string of four films. He first appeared in the initial instalment of the series, GoldEye in November 1995; he’d eventually return for it’s later segments, Tomorrow Never Dies (1997), The World is Not Enough (1999) and Die Another Day (2000). Having received a handful of awards and nominations for his portrayal of agent 007, his role in the series is considered to be  one of his best performances to this date.

Since his departure from the James Bond series 2002, Brosnan has starred in a variety of big name projects such as the films, The Matador (2005), Mamma Mia! (2008) and The Ghost Writer (2010)ーall of which had garnered the actor much positive recognition as an actor.

But what has the man of James Bond fame been up to as of late? What happened to Pierce Brosnanーwhat undertakings have he been taking on recently as an actor? Where is he now in 2018? 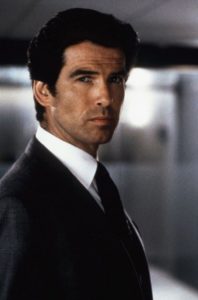 Born on May 16, 1953 in County Louth, Ireland, Pierce Brendan Brosnan is the only child of parents May Brosnan, a nurse and Thomas Brosnan, a carpenter. When Brosnan was only an infant, his father left the familyーhe has never met him. Wanting to provide a better life for his son, his mother eventually also relocated to London for work, leading him to have been raised majorly by his grandparents.; his mother would return to visit once or twice a year. After his grandparents passed away, Brosnan was sent to stay at a boarding home despite original plans to live with his uncle and aunt.

Raised as a Roman Catholic, Brosnan attended religion classes on the side at a local school run by De La Salle Brothers; he also served as an altar boy at the time. At the age of eleven, Brosnan traveled to Scotland to reunite with his mother and her new husband, William Carmichael. During their meeting, Carmichael took the young boy to see a James Bond movie togetherーa memory which would remain close to Brosnan. After eventually moving back to the city of London, Brosnan enrolled at Elliot School, a co-educational high school known for its academy status. As an Irish boy in a predominately British-filled school, Brosnan later recalled having felt like “an outsider” most of the time during class; at the time, he was also known as “Irish” by his classmates.

Leaving the school at sixteen, Brosnan found his calling in art and decided to become a painter. Pursuing his newly found goal, he enrolled at Saint Martin’s School of Art in London and began studying commercial illustration. However despite his desire to go into art, he would later work for a circus agent for a period of three years after having been seen busking on the streets. Shortly after the experience, Brosnan went to the Drama Centre in King’s Cross to begin his training as an actorーBrosnan would later go on to describe his realization of wanting to become an actor to be “liberating.” 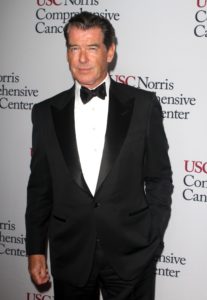 After his graduation from the drama school, the aspiring actor began working at York Theatre as an assistant manager, eventually making his acting debut in a production of Wait Until Dark. Following his role in the play, it wasn’t long before he was cast as the character of McCabe in The Red Devil Battery Sign; his portrayals of the characters would eventually lead to praises from playwright, Tennessee Williams.

In 1979, Brosnan landed his first professional acting role in the television film, Murphy’s Stroke. Continuing on with his career, he appeared in the movies The Long Good Friday and The Mirror Crack’d in 1980. Eventually, he was cast as a character in the mini-series, Manions of America in 1981ーit would be Brosnan’s first American project. Having gained traction with his acting, Brosnan received his first starring role in the NBC drama series, Remington Steele in 1982, opposite actress Stephanie Zimbalist.

First aired on October 1, 1982, the show revolved around a female detective named Laura (played by Zimbalist) as she tackles cased at her detective agency together with former thief and partner, Remington Steele (played by Brosnan). Praised for being a great hybrid of a romance and detective story, Remington Steele played a major role in the launching of Brosnan’s acting career. Having garnered a loyal viewership at the time, the show continued for five years and eventually ended on April 17, 1987 after a total of 94 episodes. To this day, it remains to be one of Brosnan’s best remembered roles of all time.

Rising in popularity after the success of the show, Brosnan went on to appear in a number of media projects throughout the latter part of the 80’s including the films, The Fourth Protocol (1987), Taffin (1987) and the TV mini-series, Noble House (1988) and Around the World in 80 days (1988). 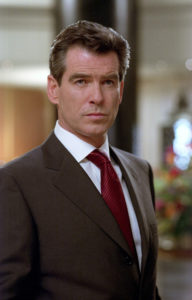 After a series of film roles in the early 90’s, Brosnan was eventually cast as James bond in the British spy film series of the same name in 1994, signing a three-movie contract. The actor made his first appearance as the secret service agent in 1995 in the first movie, GoldenEye. First released in theatres in November 1995, the film was the seventeenth film in the James Bond series. Directed by Martin Campbell, Goldeneye told the story of Bond’s battle against an ex-MI6 agent, who had taken the use of a satellite to threaten a worldwide financial meltdown. A major success at the box office, the film grossed over $350 million across the globe and was overwhelmed with positive reviews from critics. Goldeneye would go on to receive a number of awards and nominationsーincluding two for the BRAT awards for “Best Sound” and “Best Achievement in Special Affects.”

In 1997, Brosnan returned for the second James Bond movie, Tomorrow Never Dies. As the second film of the series to star the actor, the movie followed the agent as he attempted to stop a power-hungry media proprietor from initiating events to spark World War III. Although the film was met with mixed reviews upon its release, it has been praised by some critics who’ve cited it to be “the best Bond movie in many years.” Opened in theatres in December 1997, Tomorrow Never Dies was a huge commercial successーhaving surpassed that of Goldeneye a few years prior. Grossing $333 million from a $110 million budget, the film was only second to Titanic, which was released on the same day, in the box office.

The third British spy movie was released in 1999. Entitled, The World Is Not Enough, the film once again followed Bond as he worked to uncover a nuclear plot while protecting the heiress of an oil company from an international terrorist. Filmed in Turkey, France and Spain, The World Is Not Enough earned over $35 million at its premiere and eventually grossed over $360 million across the world, despite its mixed reception with critics. Brosnan would continue to reprise his role as Bond for one last time in the 2002 film, Die Another Day.

Following the fourth instalment of the film, many began wondering whether or not the actor would be reprising his role as 007 for a fifth time. However despite having initially expressed enthusiasm for the role, Brosnan later announced that he’d been dismissed from the film series. Shortly afterwards, he turned to provide the voice for James bond in a number of video games such as the third-person shooter, Everything or Nothing in 2003.

Throughout the next years, the actor went on to partake in several successful films, including the dark comedy The Matador (2005), the musical comedy, Mamma Mia! (2009) and political thriller, The Ghost Writer (2010ーall of which had earned Brosnan many awards and nominations. 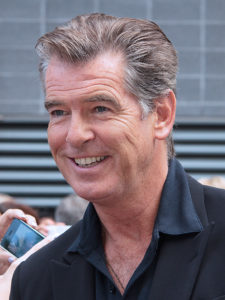 A busy man, Brosnan has been busy filming this year after being cast for several projects, one of which include the upcoming action film entitled, Final Score. Set at a major sporting event, the movie will centre around a group of heavily-armed criminals who seize the stadium for ransom, much to the horror of the citizens presentーan ex-soldier must then step up to save the crowd, one of which is his beloved daughter. Other starring actors in the film will include Dave Bautista, Ray Stevenson, Alexandra Dino, Julian Cheung, amongst others. The film has began to film earlier this August and is currently set for a 2017 release.

Besides Final Score, Brosnan will also be taking part in another upcoming movie called, Across the River and Into the Trees. An adaption of author Ernest Hemingway’s novel of the same name, the film will revolve around Colonel Richard Cantwell, a man who decides to ultimately spend his weekend in quiet solitude following the news of his incurable illness, during World War II in Italy. First announced in February of this year, Across the River and Into the Tree will also mark Brosnan’s second time working with director, Martin Campbell, whom he’d had worked with earlier in the James Bond movie series. It is tentatively set to release in 2017.

If you’d like to stay up to date with the actor of James Bond fame, you can do so by following him on social media. You can find him on Twitter @PierceBrosnan or on Instagram @PierceBrosnanOfficialーOr if you’d prefer, you can also visit Pierce Brosnan on his official Facebook page!