Before her Shark Tank appearance, Julie and her husband made sure to be fiscally responsible. They were careful not to accrue debt of any kind. When the opportunity to purchase the existing business of Slawsa presented itself to Julie, she was able to utilize her savings instead of having to take out a loan. Would the Sharks like the taste of Slawsa, and believe in Julie and her ability to take the business to the next level? Let’s take a look. 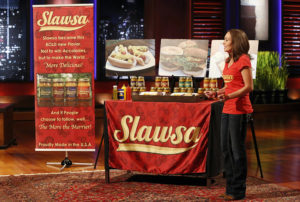 Julie Busha Walked out into the Shark Tank, and onto the stage. She introduced herself and told the Sharks that she was here to get a  hundred and $50,000 investment in exchange for 15% of her company, condimentsSlawsa. She asked the Sharks if they’d ever been to a grilling or tailgating event where someone has complimented them on their condiments.  Julia accused traditional sauces of being boring. She claimed her new comment, Slawsa, would change their lives.  Julia said Slawsa was a cross between a slaw and a salsa. Julia insisted that her new condiment was good as a dip, or for use as a condiment on burgers or hotdogs. She offered the Sharks samples. She told them it was “Slaw-some” which had Lori rolling her eyes.

Julia told the Sharks that she had developed 4 flavors of this continent. She handed Robert a sample of the Garlic, and Garlic Spicy. She stated that they also had an Original flavor, and a regular Spicy. Julia recommended that the Sharks taste the Slawsa before actually putting it on the hot dogs that were also on the plate. Lori asked what the condiment was composed of, and Julia told her that it contained cabbage as well as salsa.  Robert wanted to know what her sales look like. Julia told him that she had been in business for a year-and-a-half, and in that time managed to snag  4200 stores.  Lori looked impressed.  Julia said that her sales for the first year totaled $120,000. She projected that her sales for the rest of the year would be $500,000.

Lori asked what stories she was actually in.  Julie and told her that she was in several major grocery retailers, including Kroger’s and Publix. Robert wanted to know how she had managed to snag those accounts. Julia told him that she went herself to sell the product, and she was extremely aggressive in doing so. Mark laughed and told her good job. Robert wanted to know how Julia had gotten started in the business. She told him that it was based off of an old family recipe  Of a former business partner of hers. Julia told them that she had bought the partner out of the business. Mark asked her how much she paid in order to buy that existing company. Julia told him that she had paid $50,000.

Mark wanted to get a clear picture of the business. He said that there’s been many different kinds of relish, but she had gone in and invented her own condiment. Julia confirmed that there’s nothing else like Slawsa on the market.  Robert asked her how much the product would be compared to a standard relish. Julia let him know that it would be 20% higher.  she said that this was because the process to make Slawsa  was more labor intensive then relish. Kevin asked her if she had a co-packer 4 the product, and Julia confirmed that she did. He wanted to know then what it cost for her to make it, and what the retail price was. Julia told him that each flavor cost $1.25, and she sold it for $2.25. Kevin asked her if she was paying a royalty to the partner that she bought out, and Julia told him that she was. She paid .66% to 2%, and she was sure to point out that it was not in perpetuity.

Daymond wants to know what she would be using the  $150,000 for. Julia told him that the Buyout was her responsibility, and was not on the books of the business. Kevin wanted to know if the buyout came out of her profits, but Julia told him that it came out of her personal savings.  She told the Sharks that she and her husband had been extremely fiscally responsible, but she started to tear up as she said it.  She told the Sharks that they had graduated college debt-free, she bought a house that was a lower amount than she was approved for, and they don’t pay any money into credit card interest because they do not live beyond their means.  She said that she would not have taken the leap to become an entrepreneur if they did not been so responsible, and able to save up that money. She said that she wanted the investment in order to increase production, because they were expanding rapidly.

Daymond asked her if she was currently taking a salary, but she told him that she wasn’t. Julia told him that she was okay with, but they seem surprised. The Sharks want to know how she was supporting herself. Julia said that she and her husband had saved up a lot of money, and it was enough to live off of. MArk said that he loved what she was doing. He called julia an example for people around the world who could look at her and see that a little sacrifice was required to be successful. Mark said that he rarely sees that on the Shark Tank. He told her that he wished he could do more. he said that he would be a customer, but it wasn’t enough for him to make an investment. Julia told him that she would really like to get into sports stadiums, but he went out.

Robert told Julia that she was a tough cookie.  Lori told her to take it as a compliment. Robert said that Julia had set herself up for success, but he was not a fan of Slawsa. He said that he found it too sweet. Julia could go with the spicier flavor, but he went out.  Julia said that she would like to have a partner because she has never scaled a business like this. She insisted that she would not be an entrepreneur that need her hand to be held. Julia stated that she hasn’t made her hand to be held for several years. Daymond hinted that he did not like the taste of the product, but said that the sales have proved him wrong. He did say that he wasn’t excited about the product. It was hard for him to get behind it. He went out.

Lori told her that she did an amazing job getting into Krogers. She stated that she did not want to be in the Slawsa business.  Lori again told her that she had a great product, but said that she would be out.  Julia appealed to mr. wonderful. She said that  she knew that he liked to make money, and she had sold 200,000 jars with very little marketing in less than two years time. Haven’t told her that her sales were admirable, and he could see that she was passionate about it. He said that 15% of the business, she was just not worth it yet. Julia said that she would like to tell him why she thought that she was worth a million dollars. Julia told him that she projected next year sales to be very close to her valuation. Kevin let her know that the valuation doesn’t take into account the risk of a sole proprietorship. He told her that she could go out tonight, and get run over by a bus, and that would be the end of her business. Julia said that she he could always put out  and insurance policy on her, but he told her that that would just make him want to run her over with the bus. Kevin told her that he wished her the best, but he was out.

Make sure to congratulate her on her success so far. Julia interrupted him, saying that she would make all of the Sharks regret their decision to not invest.  She said that she would keep on going, and make it even more successful. She thanked them, and walked off the stage. After she walked off, Mark made another comment about how impressed he was that Julia didn’t have any debt. He said again that it was a great example for people to see someone with no debt, no credit cards, and a successful business.  In her exit interview, Julia was holding back tears as she said that success does not come without sacrifice. She said that she’s taking a rest, but she will be successful.

Slawsa Now in 2018 – The After Shark Tank Update 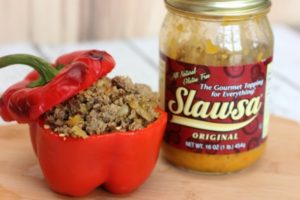 Even though Julie was not able to get a deal with the Sharks, she was still able to grow the business on her own. Post Shark Tank has been a whirlwind of television appearances and thinking of new product development for Slawsa.  Julie was able to tape an appearance with Dave Ramsey about her frugality in starting the business. Slawsa is also on the healthy items list for Ashley Koff’s Better BBQ segment.  They have  few new flavors in development, including a Habanero-based flavor named “Fire-Slawsa.” If you would like to purchase some Slawsa for yourself, you can do so on their website.