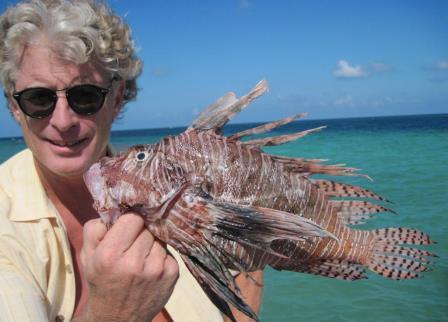 Dave Johnson, founder and president of Traditional Fisheries, has just stepped into the Shark Tank with the vice president of his company, Gary Groomes. The two of them are searching for an investment of $225,000 in exchange for 25% equity in their company. The two of them need help to fight a war against an environmental terrorist, the Lionfish. The Lionfish is one of the worst environmental terrorists, Dave claims, since they are causing an economic and ecological disaster. Long-prized for its beauty, the exotic fish was imported from the Pacific and sold in tropical fish stores. About 20 years ago, somebody dumped a handful into the Atlantic Ocean where they have multiplied like rabbits in just a couple short decades.

To demonstrate their point about the invasion of the Lionfish, Dave and Gary turn to the monitor, where an automated image shows the growth of the Lionfish on the East Coast. The Lionfish, because of its venomous spines, has no natural predator, and already, it is the second most populous fish in the Western Atlantic and Indian oceans. The Lionfish has been killing off valuable species, such as snapper, grouper, lobster, shrimp, and crab. Thousands of fisheries, and millions of people, depend on these aquatic species in order to make a living and feed themselves. Even worse, the Lionfish feeds on fish which are essential to keeping coral reefs alive.

The oceans are already in crisis, and the Lionfish could be the straw that breaks the camel’s back. Fortunately, Gary and Dave have an excellent solution for this. If you can’t beat them, eat them! Gary and Dave call for Chef Jeff to come out, and Gary explains that they will be feeding the Sharks Lionfish. The Lionfish is 100% safe to eat, but Lori is curious what type of fish it can be likened to. Dave feels that it is most similar to snapper or grouper fish. Mark is perplexed and asks what the two of them are calling their product. Gary replies, the item is on the menu as simply “Lionfish.”

Mark then asks why, asking why they have not changed the name. Sea bass was not always called “sea bass,” and Gary agrees as he knows the full name for it – Patagonian Toothfish. Sea bass definitely sounds better than patagonian toothfish. However, while Dave agrees with Mark’s point, they also want to help people out with the knowledge of the problem and start to work to save the ecology of the ocean. However, if Mark is willing to part with some amount of money, the two of them will be willing to call the Lionfish whatever Mark desires, maybe even the Cubanfish.

Daymond then asks if Lionfish taste so delicious, why have others not begun to serve the fish as well? Gary admits that the process has taken a long time and cost a lot of money. Daymond then asks about the process of catching a Lionfish – they do not bite on a hook and they live in caves in a reef, so you cannot net or bait them. You must spear them in order to catch them, so they have been teaming with Mexican spearing cooperatives. Daymond then asks about the reality of sustaining the business model, but Gary reveals that there are a surprising number of spearing cooperatives in the Caribbean.

Mark asks about the cost of fish per pound compared to other fish per pound, and Dave says that he feels the price would be close to grouper or snapper, meaning that there is really no cost element. This means that the person would have to be willing to choose the fish based on the taste and knowledge of the ecological danger. Robert then brings up a very good point – how does your average consumer know that they should consume the Lionfish, and that it is indeed safe to consume? Dave says that the two of them are introducing a new fish into the U.S. market, but if this is such a problem, where is the government? Robert says that Dave brought up the fact that reefs will die, but Dave admits that he feels that there is just a general lack of funding and interest from the government in rectifying this problem.

Daymond then asks about the business side of Traditional Fisheries – how much have they sold in the past year? Gary admits that they have only sold $12,000 worth of fish. All of the Sharks are deflated, then Robert speaks up. Robert likes their pitch and that they have found a way to solve a problem and make some money in the process, but the reality is that if there is an unlimited supply and no demand, the product is a failure. So, Robert is the first Shark out of the deal.

Kevin says at Cape Cod at the turn of the century, lobster was considered the cockroach of the sea and was actually fed en masse to prisoners. It took 40 years to convince Boston, and the rest of the world, that lobster was actually a delicacy, and now lobster trades for $15 a pound in certain areas. 40 years is a long time, and the little Lionfish cockroach, may take a long time. Unfortunately, Gary and Dave will be dead long before the Lionfish is found to be a delicacy. Kevin jokes that he will not be dead since he is a vampire, but unfortunately, he is out of the deal as well.

Daymond says that he feels the company is facing a huge educational challenge, and $225,000 will not be enough to get the product into the market and bring awareness. So, Daymond is out of the deal as well, leaving just Mark and Lori remaining. Mark starts by saying that the two of them ultimately have a high-leverage problem on their hands; if they do not solve it, there is a huge issue, but if the two of them find a way to solve it and there is demand for the solution, they can make a huge amount of money. The catch 22, however, is that solving the problem will take a lot of money. The two of them did not ask for enough money to solve the problem, in reality. Mark also feels that they did not focus enough on smaller, more niche markets, so there is also some miscommunication in the effort to move forward. Mark is out of the deal, leaving only Lori.

Lori starts by saying that she is for any pro-ecology solution, and she truly hopes that some sort of solution will come up in a more global way with more help. However, she cannot see people running in droves to eat Lionfish, so for these reasons, Lori is out of the deal.

Unfortunately, Gary and Dave do not find their investment in the Shark Tank. The second Gary and Dave step out of the Shark Tank, all five Sharks run up and begin to look at the captive Lionfish in the aquarium, and are amazed at all the details of the fish’s composition.

Traditional Fisheries Now in 2018 – The After Shark Tank Update

Finding any information about Traditional Fisheries is quite a daunting task, as the pitch of the Shark Tank was quite an interesting one. The company name was only ever mentioned a few times, as the idea was primarily about catching the Lionfish and eating it, which leaves a lot of questions unanswered – where is the restaurant located, are you even a restaurant, are you a logistics and distribution company, and many more questions about how these spearing cooperatives are able to deliver ample, quality supply of the Lionfish.

Since the appearance on Shark Tank, the problem of the Lionfish has been given a much bigger amount of attention, even including a scholarly journal published in Oxford Journals. Traditional Fisheries appears to based out of Minnesota, but unfortunately, they have not given any more indication about what their company is or actually does. Traditional Fisheries does have a social media presence on both Facebook and Twitter, but they have not updated their Facebook since December 18, 2013, and they also have a twitter that has not been updated since March 2013.

At a certain point, Traditional Fisheries attempted to run an IndieGogo campaign to crowdfund their fishing/spearing efforts to save the ocean from the Lionfish, but this appears to have failed. Attempting to access the URL of the failed project page yields a result that reads that the page has either been removed, or is just no longer available. Only God can save us all from the Lionfish, now.