When most kids her age were awkwardly going through puberty, and getting used to high school, Rachel Zietz was starting to build her own business. Gladiator Lacrosse was born when Rachel realized that she was dissatisfied with most of the available lacrosse equipment. Instead of dealing with inferior equipment that fell apart after a month of hard use, she had her own manufactured. Rachel was able to pay off the $30,000 loan she’d received from her entreprenuer parents. She also generated $300,000 in sales! Would this ambitious 15 year old be able to get a deal from the hard-to-please Sharks? Let’s take a look. 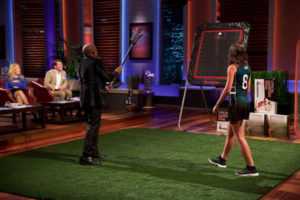 A young-looking Rachel Zietz walked out into the Shark Tank wearing a sports jersey, and carrying a lacrosse stick. She introduced herself, and asked the Sharks for $100,000 in exchange for 15% equity in her company, Gladiator Lacrosse. She stated that she was passionate and competitive in all her pursuits, including in business, her studies, as well as her favorite sport. Lori smiled at her encouragingly. Rachel continued, saying that she ran into slight problems with her parents while trying to practice lacrosse, as they didn’t want her breaking anything, or playing indoors. To make them happy, Rachel spent hundreds of dollars on shoddy outdoor equipment that quickly fell apart with hard use.

Knowing what would make her life easier, Rachel designed and manufactured her own equipment, and developed her brand, Gladiator Lacrosse. She called the equipment she designed both affordable and resilient, and “able to withstand the constant punishment that competitive lacrosse players deliver.” Rachel claimed that lacrosse was quickly gaining in popularity, and she asked the Sharks which one of them wanted to join in. Before they could answer, she told them that she wanted to perform a demonstration with the equipment on stage.

Robert told her go ahead. She started bouncing a ball of a trampoline-like square on the stage, which she called the rebounder. Rachel said that it allowed players to practice throwing and catching skills. She also pounded the ball into the goal with her lacrosse stick. She invited the Sharks up to try out the Gladiator Lacrosse equipment, and Daymond took her up on her off. He warned her that he has never played lacrosse before as he took the stick. Daymond awkwardly tested out the rebounder, and caught the ball in the net of the stick. He handed the stick back to Rachel, telling her he did not want to test his luck. The other Sharks laughed, and congratulated Daymond.

Robert asked her if she had built better mousetrap, essentially. Rachel confirmed that she had. She claimed that Gladiator Lacrosse equipment did not rust or tear within a month like her competitors products did. Lori asked Rachel for her age, and Rachel replied that she had just turned 15. The other Sharks seemed impressed. Lori asked her how old Rachel was when she first began her company, and Rachel replied that she’d been 12 years old. Robert jokingly told her that she would need to do more with her life if she wanted to succeed. Lori wondered who helped Rachel along the way, and how she thought of how to make better lacrosse equipment. Rachel told her that both of her parents were entrepreneurs, and they gave her good business advice. She attended “Young Entrepreneurs Academy” and had access to mentors that assisted her in the business process.

The Sharks looked amused, but Rachel continued. She stated that she uses the Gladiator Lacrosse equipment to improve her game. She insisted that her competitors did not know the game of lacrosse as well as she did. They didn’t specialize, and instead made equipment for all of the different sports. Kevin wanted to know how big the entire market was, and Rachel told him that it was a hundred million dollar industry. He told her that she was currently 1% of that market, and wondered how big she could actually get. Rachel told him that she planned on ruling the whole market. With the investment, she could afford to expand her product line. This would allow her to upsell additional purchases to customers who bought the more costly items.

Robert asked how much her current products cost to make. Rachel let him know that the goal cost $38.50, and the rebounder was $66. She retails the rebounder for $249.95, and the goal for $149.95. Lori asked how busy she was, between school and running the business. Rachel said that she had great time management skills, and was easily able to balance her schooling, as well as lacrosse, and the business. She was also a job creator – she had an employee to help out with order fulfillment, and marketing, as well as phone tasks. Daymond asked who the employee was, probably thinking it was one of Rachel’s friends. Rachel told him the employee was a college student.

Robert requested that Rachel walk him through a typical day in her life. She gets up at 6am to work on the business, continues working on the bus to her high school. She had lunch, as well as some free periods where she handled customer calls and order fulfillment. After school, she went to practice as captain of her lacrosse team. She had dinner with her family afterwards, and homework. After homework, she took more customer calls. Robert asked what she was planning on doing with the money, and Rachel told him that she wanted to increase distribution of her products. She said that she was in talks with Walmart to sell there. Rachel also wanted to develop a sales team to sell at nationwide tournaments. The last thing that she planned to do with the $100,000 was to add variety to her product line, such as goggles and sticks. Robert wanted to confirm that she mainly wanted the money for inventory, and she confirmed that she wanted that, in addition to widening her sales channels.

Kevin asked Rachel to imagine that she was able to secure 30% of the market. He told her that there was no way for her to increase to a $30 million dollar business between all of her other obligations. He wanted to know who would be running the company, and Rachel asserted that she would still be the head person who watches over the employees. She would hire people as necessary as the business expanded. Kevin told her that she was a large part of the branding, which added credibility to the company. He told her that he was torn on what to do since there was so much risk involved. He said that Gladiator Lacrosse was essentially a hobby to her, even though it had great potential. He went out. Rachel looked upset, but thanked him anyway.

Mark was up next. He said that even though Rachel deserved a lot of credit, he was not familier with the sport. He went out, but told her that she deserved credit for working so hard, and setting a good example. Robert told her that her presentation was great, but he did not think that she needed the money at present. He went out. This left Lori and Daymond. Daymond asked Rachel what she would do if she did not receive the money. Rachel said that she would work extra hard, and continue reinvesting her profits to get more containers. Daymond said that he thought he would be doing her a disservice by taking equity in her company. He went out, telling her it was for the best.

Lori appeared to be considering. She told Rachel that her presence on the show made her believe that “women were built for business.” Lori even went as far as to say that she felt humbled by Rachel, and her achievements. She said that Rachel was already doing everything right, and she did not think that she could add value to the business in any way since it was an area that she was unfamiliar with, Lori decided to go out. The Sharks all congratulated her on doing a good job, and wished her a happy birthday. In her exit interview, she said that she watched Shark Tank every week, and was honored to have been on the show. She said that she hoped that she inspired other young people to start their own businesses. Rachel handled her failure to get a deal with the Sharks with more grace than some of the adults that have been on the show. Let’s see how she is doing now.

Gladiator Lacrosse Now in 2018 – The After Shark Tank Update 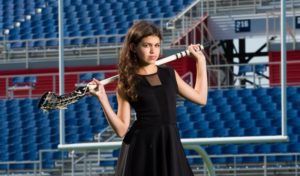 Rachel seems to be doing just fine on her own without a deal from the Sharks. As Robert said on Twitter, “She’s a Shark in the making.” Rachel was named one of the 30 Most Influential Teens of 2016 by Time Magazine. She was also featured on the 18 Under 18 list on Fortune.com for “Young Innovators Who Are Changing the World.” The Gladiator Lacrosse twitter account has been posting pictures of the business at lacrosse tournaments, as Rachel stated was her goal on Shark Tank. According to the website, Gladiator Lacrosse has secured a Brand Ambassodor, American professional lacrosse player Casey Powell.