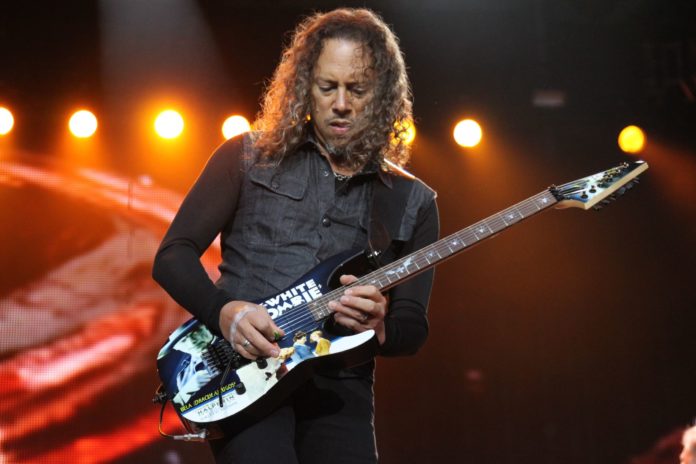 When it comes to heavy metal music, there is no bigger band than Metallica. Formed in 1981, the band has multiple world tours, several classic hits, over 110 million albums sold, and a Rock and Roll Hall of Fame induction to its credit. For all but two of those years, Kirk Hammett has manned the position of lead guitarist, playing some of the most iconic riffs and solos in music history.

Metallica is still active over three decades after they started, but their album release schedule has gotten wider and wider as their career progressed. With all the extra time spent not recording, what is Kirk Hammett doing today?

Kirk grew up in the San Francisco Bay area. Born in San Francisco itself, he was raised mostly in the small town of El Sobrante and attended high school in Richmond. His older brother was a big influence on his hobbies and interests, first getting him into comics and horror films, and then into rock and metal music.

One of Kirk’s classmates in high school was eventual Primus frontman and bassist, Les Claypool. They became friends and maintained that friendship into adulthood. Much later, after the untimely death of Metallica bassist Cliff Burton, Claypool was among the bassists to audition for the role of his replacement.

Kirk got his first guitar at 11, but he was 15 when he started playing seriously. He started with a cheap guitar bought from a Montgomery Ward catalog, then eventually moved up to a Fender Stratocaster and added a Gibson Flying V. He started off playing through a speaker in a shoebox, but he knew he needed a quality amp to hone his sound. He briefly took a job at Burger King to finance the purchase of a Marshall amp, then quickly quit to focus on music.

Hammett went on to form the band Exodus, his first serious band, at the young age of 16. They were an influential band in the Bay area thrash scene, and he played on Exodus’s 1982 demo. While a member of Exodus, he was also taking guitar lessons from famed guitar virtuoso Joe Satriani. According to Hammett, he would ride a bike 25 miles each way to attend the lessons. Satriani has stated he didn’t have a lot to teach him, as Hammett was already a professional by that time. 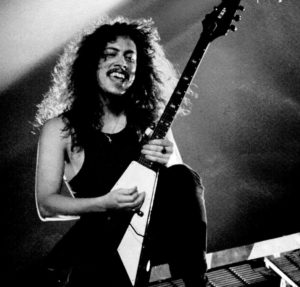 While Kirk has been lead guitarist of Metallica for nearly its entire existence, he was not its first. Dave Mustaine, eventual founder of metal superband Megadeth, was the original lead guitarist for Metallica for two years. After a series of conflicts involving drugs, alcohol, and violence, Mustaine was fired from the band. Metallica called Hammett later the same day to audition for the part.

At the time, Hammett was still a member of Exodus and had never left the state of California. Still, the opportunity was too good to pass up, so he got together enough money to fly to New York for the audition. He was quickly accepted and became a permanent fixation in the Metallica lineup.

Metallica’s first album in the Kirk Hammett era would be Kill ‘em All, renamed since the original title, Metal Up Your Ass, was not considered usable by their record label. The album was a moderate hit on the major charts but cemented Metallica as a force to be reckoned with in the heavy metal scene.

While James Hetfield and Lars Ulrich are the primary songwriters in Metallica, Kirk has contributed some of the band’s most memorable riffs, as well as his many memorable high-octane guitar solos. The song “Creeping Death” from their second album, Ride the Lightning, was originally an Exodus riff.

By the time their third album, Master of Puppets, was out, Metallica had become a pretty big band. While they were on the European leg of their world tour, Kirk and bassist Cliff Burton had a dispute about sleeping arrangements on their tour bus. They settled it by drawing cards. Cliff won and took Hammett’s usual bunk in the back of the bus, and Kirk went to the front.

This otherwise uneventful situation became anything but when there was a bus accident in the early morning, throwing Burton out the window and crushing him beneath. Kirk has said that it easily could have been him killed that night had things gone differently. Fans have speculated that the title of the song The Shortest Straw from Metallica’s next album, …and Justice For All, was inspired by this incident, though the lyrics of the song are unrelated.

Metallica was devastated, but they eventually had to keep moving. They auditioned a number of bassists for the position, and Jason Newsted won the part. A complete band once again, Metallica got to work on their new album, …and Justice For All. The album really highlights the guitars, as there are often as many as six guitar tracks playing simultaneously.

While Justice was a hit, the follow-up album would catapult Metallica into the minds and ears of the general populace. It was also on Metallica, more commonly referred to as The Black Album, that Hammett made his most memorable songwriting contribution. Kirk wrote the main riff to the song “Enter Sandman,” arguably Metallica’s most recognizable song and the driving force behind Metallica’s surge into superstardom. Metallica would tour for nearly four years in support of the album, which is the longest charting album in history and has sold over 16 million copies.

Hammett took some time between Metallica and Load to study at San Francisco State University, and he began to delve into other genres such as blues and jazz. These sounds influenced Metallica’s next two albums, Load and Reload. While commercially successful, the albums turned off many metal fans who thought they had gone deviated too far from their roots. Hammett himself has decided to refocus on metal since Death Magnetic, and the sound of the album reflects that.

In 2001, Metallica was in turmoil. While they were working on St. Anger, the band struggled to work together. There was a legitimate possibility of them breaking up. Eventually, James Hetfield checked himself into an alcohol rehabilitation center, putting Metallica on hold. During this time, Hammett considered doing a solo album. Eventually, Hetfield recovered, and so did the band, who completed the album in 2003. 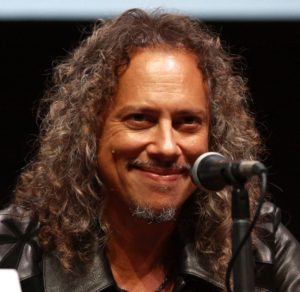 Kirk has been keeping himself very busy. Now in his 33rd year as Metallica’s lead guitarist, Hammett contributed in that role to the band’s upcoming album, Hardwired…To Self Destruct. As of October, two of the tracks have been released publicly, and the album is set to release on November 18.

In 2015, Hammett mentioned losing his phone, which he claims contained over 250 riffs and musical ideas he had recorded to possibly turn into songs. None of them were backed up, and Hammett maintains he can only remember eight or so of them. He has learned his lesson and makes sure to back up his ideas today. Even so, the incident led to Hammett making no songwriting contributions to Metallica’s new album, as the other band members had fresh ideas and he wasn’t prepared to add his own.

The love for the horror genre Hammett acquired as a kid has never waned. From childhood to modern day, Kirk has been collecting horror memorabilia, and horror themes have found their way into his work with Metallica. A self-professed horror and comic nerd, Hammett has said that his hobby has helped him kick his former drug addiction because he finds it more fulfilling and enjoyable.

In 2012, Hammett released a book titled Too Much Horror Business which details his history with the horror genre and his extensive collection of horror memorabilia. The collection includes items from movie posters, rare promotional items, and even authentic movie props. Hammett followed that venture up with a three-day festival in San Francisco called Kirk Von Hammett’s Fear FestEvil. It took place in February of 2014 and featured horror exhibits and displays as well as a number of musical guests, mostly from the world of metal. The second event took place in April 2015, but there was no event in 2016.

The lack of a FestEvil doesn’t mean you can’t get your fix of Kirk Hammett horror memorabilia, though. Hammett is collaborating with the Peabody Essex Museum in Salem, Massachusetts for an exhibit displaying his collection of horror memorabilia. The feature, which debuts in 2017, will display 90 of his works and chronicle the progress of his collection and its influence on his music.

Kirk stays busy outside of direct band work. Besides his horror hobby and his festival, he also has a number of business relationships and endorsements. He has been sponsored by ESP Guitars and has a number of signature instruments, many of them horror themed.

Kirk has also been heavily promoting his new signature line of guitar pedals by KDHK Electronics. He briefly turned a lot of the guitar world against him by commenting on Twitter about a pedal company being used by a player. This rubbed a lot of the guitar community wrong. Kirk would later make a statement admitting fault.

Metallica has been working on Hardwired… to Self-Destruct, their 10th studio album and first since 2008’s Death Magnetic. Set to release on November 18, the album features 12 songs and will be released digitally and in a double CD physical copy. A deluxe version will include a third disc featuring live performances of several classic Metallica songs.

In anticipation of the album, Metallica released videos for the songs “Hardwired” and “Moth Into Flame,” and they have performed the songs on TV and radio to much fanfare. A third song, “Atlas, Rise!” is set to be released on Halloween.

It has been 33 years since Hammett joined Metallica, but at 53 years old, Kirk is still rocking hard. The new album is already generating buzz, even before release. With the excitement that Hardwired… to Self-Destruct is creating, we can only hope the next album doesn’t take another eight years–and that Hammett can keep up with his phone when it’s time to record.