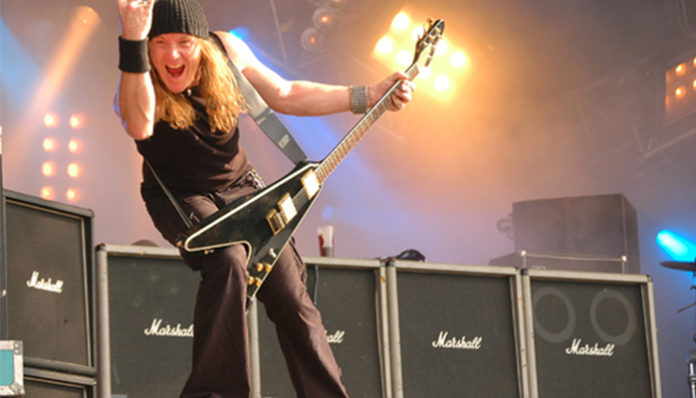 Kai Hansen is a heavy metal musician who is best recognized as the lead vocalist of the band, Gamma Ray. A prominent figure in the hard rock music scene, Hansen began his musical career in a local band called Gentry during his teen years. Carrying his interests into his teen years, he later formed a power metal group with his friend Michael Weikath called Helloween, where he acted as both the vocalist and guitarist. After a few years of performing various gigs with the band, Hansen parted ways with his bandmates following extensive touring in Europe. Recruiting several like-minded friends together, he eventually founded a four-man power metal band called Gamma Ray in 1989; other founding members include Tyran Pace, Ralf Scheepers and Uwe Wessel. With their line-up complete, they signed with Noise Records and began working on their first debut album in the late 80’s.

In February 1990, Hansen and his team released their first studio album entitled, Heading for Tomorrow; they soon followed up with their next album, Sigh No More in 1991. Throughout the decades, Gamma Ray has released a total of eleven studio albums, seven singles and eight music videos. Not only did they write and record original power metal material, but they also covered songs from several well-known musicians and bands such as Pet Shop Boys, Judas Priest, Uriah Heep, Thin Lizzy, amongst others. Considered by many to be one of the most eminent groups of the German heavy metal scene, Gamma Ray has also embarked on countless tours and concert shows which have brought them on stage in numerous countries and cities around the world. Their latest album was that of Empire of the Undead, which was released two years ago in 2014.

Although he’s best known for his association with Helloween and Gamma Ray, Hansen was also involved with another power metal band called Iron Savior in the mid 90’s. Shortly after coming together, they released their self-titled debut album in 1997; prior to Hansen’s departure from the group in the early 2000’s, the group had come out with three separate full-length albums. More recently in 2011, the popular guitarist also joined Unisonic, a Germany based hard rock band which consists of Dennis Ward, Kosta Zafiriou and Mandy Meyer. So far, they’ve released two studio albums together, the last of which was Light of Dawn (2014).

So what has the former Helloween guitarist and vocalist been up to these days? What projects have he been busying himself with lately? What happened to Kai Hansen? Where is he now in 2018? 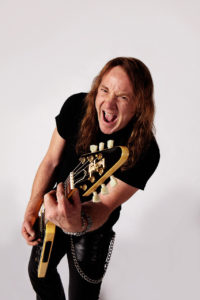 Born on January 17, 1963, in Hamburg, West Germany, Kai Michael Hansen first step foot into the music scene as a member of a group called Gentry, which he co-founded with producer Piet Sielcick. Delving deeper into the world of heavy metal, he later formed the band Helloween in the early 1980’s with vocalist Michael Weikath; their initial line-up consisted of Grosskopf, Weikath, Schwichtenberg and Hansen himself. Making themselves known in the genre, they went on to release their debut album in 1985 after landing a recording contract with Noise Records. Produced in collaboration with Harris Johns, it was met with positively reception upon its release, having earned a four star rating from critics at Sputnikmusic. Originally released in LP format, Walls of Jericho was later released on CD three years afterwards in 1988. Mainly incorporating elements of speed metal, its two-sided disc featured nine tracks including the titles Ride the Sky, Phantoms of Death and Metal Invaders, all of which were written and composed by Hansen.

Soon afterwards, their group expanded into a quintet with the addition of singer Michael Kiske. With their new bandmate, they released their next two albums Keeper of the Seven Keys: Part I and Keeper of the Seven Keys: Part II in 1987 and 1988 respectively. More successful than their initial effort, the two album  conceptual series is largely considered to be the ones to have driven the genre of power metal in Europe. Due to the fact that Helloween’s co-guitarist Michael Weikath had suffered an injury during the recording of the albums, Hansen was the sole member to have performed on the string instruments. Although the group had wished to release the two parts together as a double album, Noise Records had refused the idea; as a result, they were ultimately split up and released over a period of two years.

A commercial success, the Keeper of the Seven Keys series received much positive attention and garnered close to perfect scores from multiple critics and publishers. Although both of the albums were a hit, the second part released in 1988 was more successful on the charts, having peaked at number five in the band’s native Germany; they also charted in a handful of other countries such as Austria, Japan, Norway, Sweden, Switzerland and the UK (In comparison, Keeper of the Seven Keys: Pt 1 had only reached number fifteen on the GfK Entertainment Charts). Possibly their best-performing album, Keeper of the Seven Keys: Pt 2 eventually received Gold certification in Germany in 1991. Although the releases were successful at establishing Helloween as a worthy power metal band at the time, Hansen soon left the group and was replaced by professional guitarist, Roland Grapow in 1988. 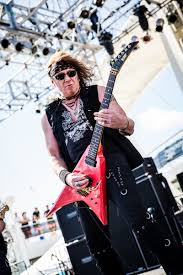 After four years of performing with Helloween, Hansen decided to part ways from the band for reasons that are still very much under debate. According to some reports, the former songwriter and guitarist of the group had started to feel that Helloween was becoming something too big to handle; their financial issues probably didn’t help the matter either. Following his leave, Hansen began working in the studio with the Germany-based heavy metal band, Blind Guardian. In 1989, he eventually started to work with long-time friend and musician Ralf Scheepers on a new music project; with time, the two-man project soon turned into a four-man project with the addition of Mathias Burchardt on drums and Uwe Wessel on bass. Thus, the power metal band Gamma Ray was born towards the end of 1989.

In the early spring of 1990, Gamma Ray released their debut studio album, Heading for Tomorrow. While it is often seen as a continuation of Hansen’s work with his preceding band, it also served as a strong turn in direction for the guitarist’s career. Produced by record producer Piet Sielck, it showcased ten different tracks, eight of which featured lyrics written by Hansen. From its track-list, a few stand out titles include Hold Your Ground, Lust for Live, Heaven Can Wait, Money and Look at Yourself. Rated four out of five stars by Allmusic, Heading for Tomorrow peaked at number thirty one in Germany shortly after its release; it also managed to chart at number twenty-four and at number forty-five in Japan and Sweden respectively. Over a decade after its original release, the album was re-released as part of an Ultimate Collection Box Set in 2002; featuring a different cover, it also included three additional songsーSail On, Lonesome Stranger and Mr. Outlaw.

The following year, the band began working on their next studio album, regularly attending rehearsals in a small remote house located in Denmark; after writing some new music material, the group started to record in the studio under the supervision of Tommy Newton. Gamma Ray’s second full-length album, Sigh No More was released in September 1991 under Noise Records. Prior to the release of the project, the band’s line-up was also changedーDirk Schlachter had joined the ensemble as a guitarist and drummer Uli Kusch had taken the place of Mathias Burchardt. In contrast to their earlier work, the album was much “darker” in lyrical themes, something that was allegedly inspired by the Persian Gulf War that was going on at the time. Although Sigh No More received a four star rating from Sputnikmusic, it was only met with lukewarm success compared to their debut effort, having only managed to chart in Japan at number twelve.

In September 1993, Gamma Ray released their third studio album entitled, Insanity and Genius. Produced in part by Hansen, it was the final album to feature member Ralf Scheepers as a vocalist. Despite the fact that its release was delayed due to the fact that the band had been preoccupied with building their own studio, it was warmly received by fans and critics alike. While Insanity and Genius did not rival the success of their 1990 debut, it was more of a hit than their preceding album, having charted in the band’s native Germany at number ninety-three and in Japan at number nine. In 2010, the album was re-issued under Cooking Vinyl Records; the new edition contained three additional tracks: Gamma Ray (Extended Version), Exciter and Save Us (live).

Over the next few decades, Hansen and the rest of Gamma Ray put forth eight more studio albumsーwhile the ones released during the mid 90’s didn’t gain much traction upon their release, their newer works in the 2000’s and 2010’s have performed significantly better on the charts. For instance, their 2014 album, Empire of the Undead peaked at number thirteen in Germany and also charted in seven other countries across the globe. 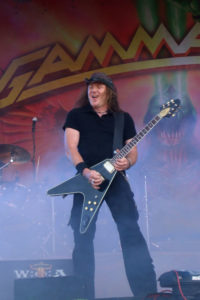 Aside from his solo endeavours, Hansen has also been busy these past few months touring with his heavy metal band, Gamma Ray. According to the posted schedule, the shows first began in Ft. Lauderdale in February 2016 and continued until April; after a couple month’s break, the concerts took off again in June  and eventually ended in July. If you didn’t get a chance to see them for yourselves yet, don’t fretーthey still have an upcoming show coming up this November!

If you’d like to stay up to date with the former Helloween co-founder, you can do so by following Kai Hansen on his official Facebook page (@Kaihansenofficial). For news on Gamma Ray, be sure to check out their website at Gammaray.org!