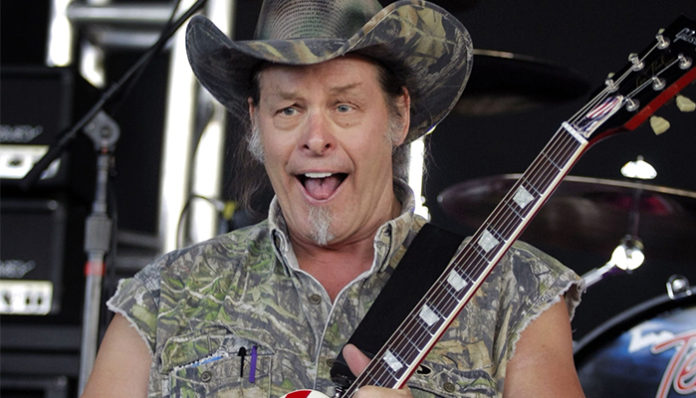 Ted Nugent is an American musician who rose to fame as the lead guitarist of the rock band, The Amboy Dukes. Involving himself with music early on, he began playing the guitar during his school days; he performed his first song at the age of ten. Delving deeper in the rock ‘n roll genre, Nugent later formed a few bands in his teen years, the Royal High Boys and Lourdes, which drew inspiration from the Yardbirds and the Rolling Stones. After playing with the Lourdes for a few years, the group split after the guitarist relocated to Illinois with his family. Not giving up his musical career, Nugent eventually founded another band called The Amboy Dukes in 1964 around the Chicago area. Consisting of four other members, they soon began performing in multiple venues in the suburb of Arlington Heights.

Following a few shifts in the group’s line-up, they signed a deal with New York City’s Mainstream Records and released their self-titled debut, The Amboy Dukes in 1967. The next year, they released their second studio album entitled, Journey to the Center of the Mind, which remains to be their best-performing disc to date. The hard rock band went on to release ten full-length albums and over a dozen singles throughout their career; a few of their stand out hits include Mississippi Murderer, You Talk Sunshine I Breathe Fire/Scottish Tea and Baby Please Don’t Go. After The Amboy Dukes’ eventual dissolution in 1975, it wasn’t until 2009 that they reunited for a performance together at the Detroit Music Awardsーtheir first time in thirty years! For their contribution to the rock music scene, the group was also presented with a Distinguished Achievement Award.

Upon parting ways from The Amboy Dukes in the mid 70’s, Nugent secured a recording contract with Epic Records and began working on his solo albums. He released his eponymous debut effort, Ted Nugent in the fall of 1975. Proving to be a multi-platinum hit, it was quickly followed by another album entitled, Free-for-All in 1976. So far, the rock musician has released fourteen studio albums and seventeen singlesーnot to mention over twenty compilation and live albums! On top of all that, the guitarist also averages more than 300 concert shows a year, having toured annually since 1976. Recognized for his hollow body Gibson Byrdland guitar and Fender ampsーtwo things which contribute to his signature sound, he has sold more than 30,000,000 records across the globe.

So what has the renowned musician been up to these days? Is he still recording or is that a thing of the past? What happened to Ted Nugent? Where is he now in 2018? 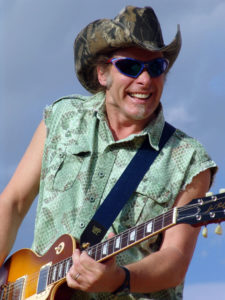 Born on December 13, 1948, in Redford, Michigan, Ted Nugent (Birth name: Theodore Anthony Nugent) is the son of Marion Dorothy and Warren Henry Nugent. The third oldest out of four siblings, Nugent was raised in a strict Catholic household, where he lived under the rules of his disciplinarian father. Interested in music (the rock n’ roll genre in particular) early on as a child, he began learning how to play a guitar as a youngster and soon formed his own bands as a teen in the 60’sーincluding the Royal High Boys and eventually The Lourdes. Drawing inspiration from popular British rock groups such as the Yardbirds and the Rolling Stone, he and his friends began performing in a number of local clubs and venues. However it wasn’t until he formed another band called The Amboy Dukes in 1964 that he first started to garner public attention.

After a period of playing gigs with The Lourdes, the group parted ways when Nugent had to move to Illinois with his family. After settling down in the new city of Chicago, he recruited a few like-minded individuals and founded a rock band called The Amboy Dukes; its other founding members include Bob Lehnert on vocals, Gary Hicks on guitar, Dick Treat on bass and Gail Uptadale on drums. Although the newly established band performed regularly at a dance club called The Cellar in the Arlington Heights area (featuring Nugent’s iconic playing style of having his Gibson Byrdland guitar positioned high on his chest), they did not release any professional recordings during that period. It wasn’t until after a shuffle in the band’s line-up that they eventually landed a recording deal with Mainstream Records in 1967. 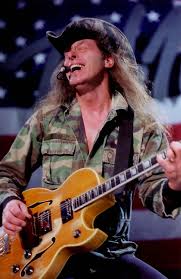 Later that same year, the psychedelic rock band released their self-titled debut, The Amboy Dukes in November 1967; produced by Bob Shad, the album was noted for its soulful yet bluesy garage sounds. Generally well received upon its release, its two-sided disc contained six songs including Down on Philips Escalator, Psalms of Aftermath and Night Time, amongst others. Praised to be an “early diamond” by Allmusic critic Joe Viglione (who gave the album four and a half stars), The Amboy Dukes peaked at number 183 on the US Billboard 200 and eventually spawned their first charting single, Baby Please Don’t Goーa cover of Big Joe William’s delta blue hit. A few decades after its original release, the album was re-issued as a remastered CD in 1992; it also included two bonus tracks titled Sobbin’ in My Mug of Beer and J.B. Special.

In April 1968, The Amboy Dukes released their second full-length album entitled, Journey to the Center of the Mind. Their best-selling album to date, it was recorded on a much greater budget compared to their previous effort and also featured two new addition to the band’s lineupーAndy Solomon on piano and organ and Greg Arama on bass. Noted for containing much heavier psychedelic and pop sounds, it showcased thirteen individual tracks, eight of which were either written or cowritten by Nugent; a few highlights from the album include Dr. Slingshot, Mississippi Murder and the title track, Journey to the Center of the Mind (which went on to become their best selling single). While the album wasn’t showered with as much praise as their eponymous debut, it performed much better commercially, having peaked at number seventy-four on the US Billboard 200 Chart.

Over the next years, The Amboy Dukes continued to put forth a number of albums including Migration (1969), Marriage on the Rocks/Rock Bottom (1970), Survival of the Fittest Live (1971), Call of the Wild (1974) and Tooth Fang & Claw (1974); however none ultimately rivalled the success of Journey to the Center of the Mind. Following the release of their seventh album, the rock band eventually disbanded with many of its members heading off to pursue solo careers. 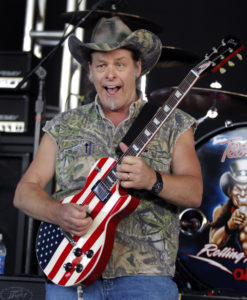 After the group’s split, Nugent signed with Epic Records and promptly began working on his solo music career. In the fall of 1975, only a few months after the disbanding of The Amboy Dukes, the rock musician released his first studio album, Ted Nugent. Recorded after a three month vacation to the Colorado wilderness, the album featured Cliff Davies on drums, Rob Grange on bass and Derek St. Holmes on guitar, all of whom Nugent had worked with previously either from The Amboy Dukes or one of his earlier local bands. Hitting the studio, the team soon started to write and compose music, which eventually translated to a ten-song track list on Ted Nugent. A major hit upon its release, his solo debut peaked at an impressive twenty-eight on the Billboard 200 and received close to perfect scores from a handful of critics and publications. Listed as “One of the 500 Greatest Rock & Metal Albums of All Time” in Rock Hard Magazine, Ted Nugent soon sold over two million copies in the US, earning it 2x Platinum certification from the RIAA.

A follow-up to his breakthrough debut, Nugent released his next solo album, Free-For-All in October 1976. His second multi-platinum record, it was produced by a team of producers including Lew Futterman, Tom Werman and Cliff Davies. Similar to his previous work, Free-For-All was met with overwhelmingly positive attention upon its release; it didn’t take long for the album to reach number twenty four on the US Billboard 200. A hit overseas, it also charted in multiple other countries including Canada, the United Kingdom and Sweden, where it peaked at number thirty-one, number thirty-three and number fourteen respectively. Recorded at Atlanta’s Sound Pit Studios, Free-For-All consisted of nine songs, six of which were the works of Nugent. Having achieved two million sales by August 1992, it also produced the single Dog Eat Dog, which settled in at number ninety-one on the Billboard Hot 100 Chart.

The following year, Nugent released his most successful album to date, Cat Scratch Fever which was released in May 1977. Applauded for its delightful and exquisitely melodic instrumentals, the album received favourable reviews all around and eventually peaked at number seventeen on the US Billboard 200. A commercial hit, many of its tracks have been featured in popular culture including in the animated series The Simpsons, Aqua Teen Hunger Force and in the video game, Guitar Hero Aerosmith. Some standouts from the disc include Wang Dang Street Poontang, Out of Control, Workin’ Hard Playin’ Hard and Live It Up. Cat Scratch Fever went on to produce two singles: Home Bound/Death by Misadventure and Cat Scratch Fever/Wang Dang Street Poontang, the latter of which reached the top 30 in the Billboard Hot 100. As of March 2001, the album has been certified 3x Platinum by the RIAA for exceeding three million in sales. 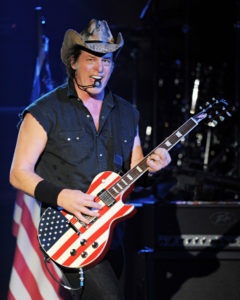 Carrying on with his tradition of setting off on annual tours, it was announced back in March that Nugent was going to be hitting the roads again for his 2016 Sonic Baptizm Tour. The event eventually kicked off on July 1, 2016 at the Celebrity Theater in Phoenix, Arizona and continued for five more shows, which spanned over a period of eight days; some of the other cities which he performed in include Fremont, Ohio, Pikeville, Kentucky, and Albert Lea, Minnesota. For hardcore fans, the rock guitarist also set up an exclusive DangerZone package, which offered its buyers a VIP laminate photograph of Nugent, which he will then autograph at a special pre-show meet and greet event, a photograph opportunity with the star, in addition to tickets to the show.

In more political news, the extremely outspoken Nugent appeared in a recent campaign video where he was spotted coming out in favour of Donald Trump. The clip, which has since been promoted heavily on social media, was also accompanied with a lengthy statement which the star posted up on his official Facebook page. He ultimately concluded his message with the words, “Vote Donald Trump for president.”

If you’d like to stay connected with the former guitarist of The Amboy Dukes fame, you can do so by following him onlineーyou can find Ted Nugent on his Twitter account (@TedNugent). Alternatively, you can also visit his official Facebook page or website for some of his latest news!