What Happened to Goldie – News & Updates 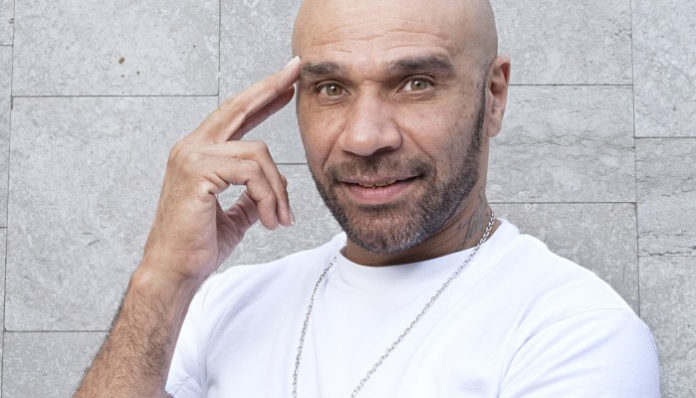 Clifford Joseph Price, more commonly known as Goldie, is a English musician who is probably most recognized for popularizing hardcore breakbeats and drum n’ bass in the UK. Raised in a series of foster homes as a child, Price started off his performing career as a breakdancer in the early 80’s; after joining various dance crews including that of a group called Bboys, he eventually began making a name for himself as a graffiti artist in the metropolitan county of the West Midlands. All while carrying on with his break dancing, it wasn’t until 1991 that Goldie was first introduced to the breakbeat music scene by his then-girlfriend, DJ Kemistry. After meeting a couple of bass producers, he went on to work for the 4hero Reinforced recording label. At the age of twenty seven, Goldie made an appearance in an album for the first time in a track called Rufige by Ajax Project.

Upon familiarizing himself with the music industry, he soon collaborated with a number of artists and producers including Heist; under the moniker of “Metalheadz,” Goldie released a track called Terminator in 1992. Following a few other releases, he set up his own recording company called Metalheadz in 1994. By the next year, he had released his studio album entitled Timeless. Since then, the former breakdancer has released close to two dozen full-length albums, and over twenty singlesーmany of which found its way onto the UK charts. Some of his hit singles include that of Inner City Life (1994), Digital featuring KRS-One (1997), Tempertemper featuring KRS-One (1998) and Believe (1998). Throughout his career, Goldie has also produced a handful of mix albums such as Drum and Bass Arena: The Classics (2006), Watch the Ride (2008) and FabricLive.58 (2011).

A graffiti artist as much as he is a recording artist, Goldie has had his artwork featured in several locations including Wolverhampton and Birmingham of the West Midlands. Besides that, his physical displays have also been heavily featured in the documentary, Bombing by Afrika Bambaataa. It’s also worth mentioning that the DJ has participated in the largest graffiti art battle in the history of Britain against Robert Del Naja, a Bristol artist who later went on to form the trip hop group, Massive Attack. Owing to his graffiti projects, Goldie also eventually began a business selling gold teeth jewelry in both Miami and in New York. On top of all his work with art, he has even starred on multiple reality television series over the years!

So what has the the musician and visual artist been up to these days? What has been on his schedule as of late? What happened to Goldie? Where is he now in 2018? 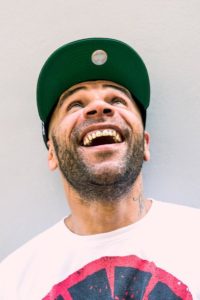 Born on September 19, 1965, in Walsall, England, Goldie (Real Name: Clifford Joseph Price) was the son of a Jamaican-Scottish couple however was put up for adoption shortly after his birth. While being bounced around several foster and child-care homes in his childhood, he soon developed an interest in the art of breakdancing. By the time he was in his early twenties in the mid 80’s, he was a member of multiple local dancing crews in his neighbourhood of Wolverhampton. Later becoming fascinated with graffiti art, it wasn’t long until he made a name for himself as a graffiti artist in the West Midland region. One of his accomplishments include having his art featured on an English documentary called Bombing by hip hop pioneer, Afrika Bambaataa.

Although he eventually started a business selling customized gold teeth in New York and Miami, he soon returned to his native London. After spending time with Nellee Hooper and Robert Del Naja, two musicians in the English hip hop scene, Goldie was later introduced to the breakbeat music culture in 1991. Immediately hooked by the sounds of raw breakbeat techno, he quickly became involved in the jungle music style himself. With the help of his girlfriend DJ Kemistry, the former breakdancer soon became acquainted with Mark Mac and Dego, two of the most influence figures in the up-and-coming drum n’ bass scene. Enlightening himself about the production of breakbeat and engineering at their studio, Goldie eventually made his debut in the music world in Ajax Project’s single, Rufige. Over the next few years, he continued to step foot into the studio, recording several collaborations with other artists on the Reinforced label. Some of his works from this time period include Terminator (1992) and Angel (1993), amongst others. 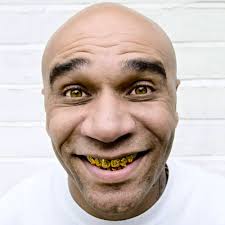 After securing a recording contract with FFRR Records, a dance music label founded by DJ Pete Tong, Goldie released his debut solo album entitled, Timeless in September 1995. A groundbreaking release in the world of bass and drum music, it incorporated a blend of layered breakbeats and jungle baselines, along with symphonic strings and female vocals. Enthusiastically received upon its release, the drum and bass album contained eight tracks, all of which were written by Goldie. Given a full five star rating form critics at Allmusic, Timeless peaked at number seven in the UK shortly upon its release; it also reached number forty-six and number twenty-two in New Zealand and Sweden respectively. Ranked as “One of the Best 20 Albums of ’95” by Spin magazine, the album also received much praise from other publications such as The Guardian, New York Times and the Alternative Press. Described as “a key event in the history of dance music”, Timeless remains to be Goldie’s best-performing album to date; it has since been certified gold in his native UK.

Three years after his debut, Goldie released his second studio album entitled, Saturnz Return in January 1998. A collaboration effort between Goldie and Rob Playford in terms of production, the album was released at the peak of drum and bass’ incorporation into popular culture. Noted for containing a hidden track of piano and voice, Saturnz Return showcased ten tracks including Truth, Digital, and Temper Temper which featured David Bowie, KRS-One and Noel Gallagher respectively in the vocals. Met with less than ideal reviews from critics upon its release, many having criticized it for its “lack of cohesion,” it did not perform as successfully as that of his 1995 album, Timeless. Despite its mixed reception however, it did manage to reach as high as number fifteen on the UK Chart; the album also charted in other countries such as Austria, France, Finland, Norway and the Netherlands.

Slowly waning in popularity, Goldie released an extended play entitled, Ring of Saturn in November 1998. Produced yet again by Rob Playford and Goldie, the disc included ten electronica and jungle styled tracks; a few titles from the EP include What You Won’t Do for Love, Judged by Colour, Heard by Sound, Seen by Blind and Kaiser Salsek, all of which were composed and written by the artist himself. In contrast to his preceding effort, Ring of Saturn was positively praised, mainly for its orchestration and industrial tech-step. The EP was given an impressive four star rating on Allmusic and also currently holds a 7/10 score on the British music magazine, New Musical Express.

From there, Goldie went on to release a number of other full-length albums including Malice in Wonderland (2007), Sine Tempus (2008), Memoirs of an Afterlife (2009), amongst several others. 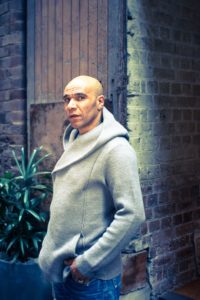 Goldie’s made his first appearance on the small screen promoting his graffiti artwork in Central Weekend, a topical debate series which aired on Central TV in the late 1980’s. Around that same time, he was also featured in various documentaries including Here and Now which also depicted British artist, Pogus Caesar’s photography of New York. During his break dancing days in the 80’s, Goldie and his friends also appeared in a variety of television series which were aimed towards young people.

Eventually breaking out into the realm of reality TV in the more recent years, Goldie soon landed a spot on the game show, Celebrity Big Brother in 2002. First premiered in the UK in 2001, the series followed the lives of a group of celebrity contestants who are isolated from the outside world in a custom built house each; every week, a housemate is then eliminated via public voting. Unfortunately, Goldie was the first to be evicted on the show’s second season.

In 2010, Goldie once again returned to the stage of a reality game series in the dancing competition, Strictly Come Dancing. Developed by Karen Smith, the talent show of sorts saw contestants from all walks of life competing against each other in both Latin and Ballroom dance competitions. The graffiti artist starred in the eighth season of the show, which began airing on September 11, 2010; other celebrities featured in the season included Matt Baker, Gavin Henson, Michelle Williams, Jimi Mistry and Paul Daniels, and many others. Although Goldie was paired with professional dancer Kristina Rihanoff, the two were eventually voted out during the second week; at the end of the season, English actress Kara Tointon and her partner Artem Chigvintsev came out as the winners.

Other series which Goldie has been involved with include Maestro and Come Dine with Me in 2008 and 2010 respectively. Aside from reality TV, he has also starred in various other shows such as Crime Business (2003), Batteries Not Included (2008), All Star Mr & Mrs (2009) and Mastermind (2009), to list a few. 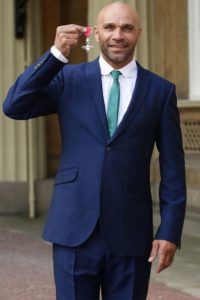 Something worth celebrating aboutーGoldie was just recently presented with an MBE (that is, a Member of the Order of the British Empire) by the Prince of Wales this February. Held at the famous Buckingham Palace, the Investiture ceremony had the DJ beaming with pride as the ribbon, which honours “contributions to the arts and sciences”, was attached to the lapel of his suit by Price Charles. In a later interview, Goldie flashed a smile showing off his golden teeth, as he described the experience to be “a bit of a shocker, but a very very beautiful thing to happen.”

Staying busy a few months after being presented with his MBE, Goldie was spotted DJing at a local dim sum restaurant in New York City; also present at the party were Vik Rai and DJ Seoul. Known as the “Dark Disco Party”, the event took place on April 16, 2016 at Chinatown’s 88 Palace. Following the North American gig, he headed off towards the UK for his festival circuit in the summer. The tour saw over a dozen shows in multiple cities across the continent and brought Goldie on stage in multiple countries including Belgium, Iceland, Austria, to name a few. Kicked off this May in Bristol, UK, it eventually ended on September 2, 2016.

If you’d like to stay up to date with DJ Goldie, you can do so by following him on social mediaーyou can find him on his official Facebook page (@Goldie). While you’re at it, don’t forget to also check out his official we site at Goldie.co.uk!