My Fruity Faces Update – What Happened After Shark Tank

My Fruity Faces Before Shark Tank

Bob Ntoya and Adam Gerber were two dads with a problem. Their kids were just not eating healthy snacks. They did what they could at home, but healthy snack packed for school lunches were coming back uneaten. They decided to start My Fruity Faces, edible stickers that the kids could place on fruit. They started with different facial pieces that kids could put around a piece of fruit, sort of like an edible Mr. Potato Head. My Fruity Faces eventually started doing characters when they secured a deal with Nickelodeon, but they had a problem – they were getting into debt faster than they were selling. Would the Sharks still take a chance on this risky business? Let’s take a look.

My Fruity Faces on Shark Tank 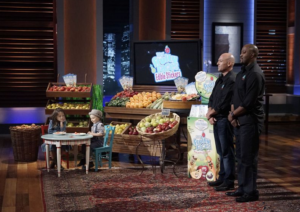 Bob Ntoya and Adam Gerber walked out onto the stage and into the Shark Tank hand in hand with two young children. Barbara said that the kids were cute, and Chris Sacca, the guest Shark on this episode, waved at the children enthusiastically. The girl waved back, looking nervous. Bob and Adam introduced themselves and told the Sharks that they were looking for $200,000 in exchange for a 10% equity stake in their company, My Fruity Faces. They were each wearing a black button down shirt with the logo in small print on the lapel.

Bob, stumbling over his words,  told the Sharks that My Fruity Faces invented the solution that “families are having in, or parents are having trying to get their kids to eat healthier.” His business partner had to help him with a few words that he got stuck on. Adam took over, saying that he and his wife spend time preparing and planning healthy snacks and lunches for their children like most families do. He claimed that the kids brought home “hot bags of brown, steaming, rotten mush screaming to thrown away.” Adam held up what looked to be brown, liquefied vegetable matter in ziplock bags. “Well Sharks, not anymore!” Bob proclaimed, but Adam whispered that he should say it again. Bob tried to continue, but Adam insisted that he say it again. Bob gave him a look and repeated the phrase as Adam brought sheets of what looked like stickers over to the kids seated at the table with plates of fruit. The kids mustered up some fake excitement.

Bob said that their product, My Fruity Faces, was all natural, and made eating fresh fruits and vegetables fun and exciting for kids. John condescendingly stated that My Fruity Faces combined “magical ingredients” with “fruity science” to create an edible sticker that was all natural and safe. He demonstrated peeling the sticker off the pad and sticking it to the fruit. John asked the Sharks to help them take a bite out of unhealthy snack time. The kids walked off, eating their stickered fruit. Mark said goodbye to them as they walked out, and Daymond told the little boy that he had a cute hat. The Sharks looked less impressed with the edible stickers than they did with the adorable kids.

Adam and Bob began to pass out the edible stickers, which . with each Sharks faces on them. Chris excitedly peeled a sticker of his face off of his pack, and Kevin examined the back of the package that he was handed. Mark peeled one off, and put it in his mouth. Daymond took a sticker, and put it on a piece of fruit. Bob told him that he would eat it then. Daymond took the stickered slice of honeydew melon, and ate it. He said that it was pretty good. Bob said that the stickers were made from tapioca starch. Kevin asked them if they were selling a lot of My Fruity Faces stickers, since they put a valuation on the business of two million dollars. Bob said that that was correct. Kevin asked them for their sales numbers, and Adam told them that they’ve sold $125,000 in product in the first three years.

Kevin asked if that was currently happening, or if that was in the past. Bob said that it was currently happening. Daymond wanted to know if they had actual purchase orders, or if they were just an approved vendor, and actually rolling the product out was just in discussions. Bob explained that the contract stated that My Fruity Faces was a vendor, and they were approved for 3,600 stores. Daymond groaned, and Mark let them know that it was not the same as a purchase order. Bob said that they haven’t done a purchase order yet, and before he could explain further, all of the Sharks groaned in unison.

Bob insisted that he would be able to get the purchase order, since My Fruity Faces was dealing with the head of produce at Walmart. Bob outlined the discussion, stating that they were currently discussing whether the stickers should be sold for $1.49 or $1.99. Adam told the Sharks that they did a test last year, and the sales were great. Daymond asked what the percentage of sales was, and Adam told him it was a 78% sell-through. Barbara asked the pair if they were planning on working with any other stores, or if they had placed all of their eggs into Walmart’s basket. Bob said that they were in talks with Target, as well as SuperValu, and Whole Foods. Barbara asked if they were still in the early stages of discussions, and Bob confirmed that that was the case.

Bob told the Sharks that they were looking into more licensed products. They previously had a license with Nickelodeon, which made the sales for My Fruity Faces shoot right up. Mark wanted to know how much money they have invested so far, and Bob told them $482,000. Mark and Daymond both recoiled, and yelled “Nooooo!” Kevin said that they’d incurred substantial losses, and asked how much debt they had with the company. Bob told him $177,000, which was more than their sales for the total lifespan of the business. The Sharks all groaned again, and Mark pointed out that that brought them up to $600,000 of loss.

Daymond asked if they were the only investors, and Bob said that they already had ten other investors. Daymond wanted to know what percentage of the company they actually owned. Bob stated that he owned 18%, and Adam owned 17.5%. Barbara stated that she could not imagine investing her money, and thinking that she was going to get it back out again. She went out. Bob wanted to add that they were working on getting a partnership with Dole. Daymond told them that they’d made the mistake of thinking that pouring money into the business was going to lead them to success faster. He told them that they didn’t make many sales, so they should have taken their small inventory to various schools and street fairs instead of immediately going to Walmart. That would have given them a proven concept instead of leaving them in debt. Daymond went out.

Mark asked them how much money they currently have in the bank, and Bob told him $4000. Barbara asked if they meant $40.000, and they clarified that it was indeed $4,000. Mark told them that Daymond was right, and said that they needed to sell if their back was against the wall. He wanted to know how much inventory My Fruity Faces currently had, and Adam stated that they had $64,000 worth of product. Mark said that they could sell the sticker sheets for $2 each, and get $150,000 in retail. He told them that their effort was what was standing in the way of them being successful.

Kevin told them that they should not be spending any more money on the concept. He went out. Chris was up next. He told Bob and Adam that he admired their hustle and drive. He thought that his kids would eat more fruits and vegetables with My Fruity Face stickers on them. Chris said that the business does not benefit from his kids getting healthier at the end of the day. They were out of money, and they had their backs against the wall. Chris told them that the $200,000 would only be enough to pay off the existing debt from the business. He said that it did not leave them with any working capital. He went out.

Bob said that he’s been fighting all his life, and he was will to face up to all of the challenges in his path. He said that if he did not believe in My Fruity Faces, he would not be on the Shark Tank.. He would have quit a long time ago. Mark told them that belief is not enough.Mark told them that he liked the idea, and asked what they had in inventory. Adam said that they had the Nickelodeon stickers, but they were not allowed to sell them until they renewed the license. Mark put his head in his hands. Mark said that the execution was wrong, and he did not want to fix it. He went out. Adam and Bob walked off the stage. In their exit interview, Bob stated that he was frustrated that they couldn’t see all the benefits to the company. Let’s see if they were able to make it with just the Shark Tank effect. 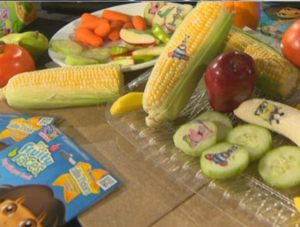 My Fruity Faces Now in 2018 – The After Shark Tank Update

It looks like My Fruity Faces is not such a Shark Tank failure after all! They are selling the sticker packs on their website, as well as on Amazon. It appears that they got the licensing deals they were seeking – the stickers come in popular character forms such as Spongebob and Dora the Explorer. They have also developed their own characters, from Playful Pets to Groovy Girls. They sell on the website for $4.99, which is way over the $2 price tag the Sharks suggested. They are also available in select Walmarts in Southern California