What Happened to Eddie Murphy – What’s He Up To Now? 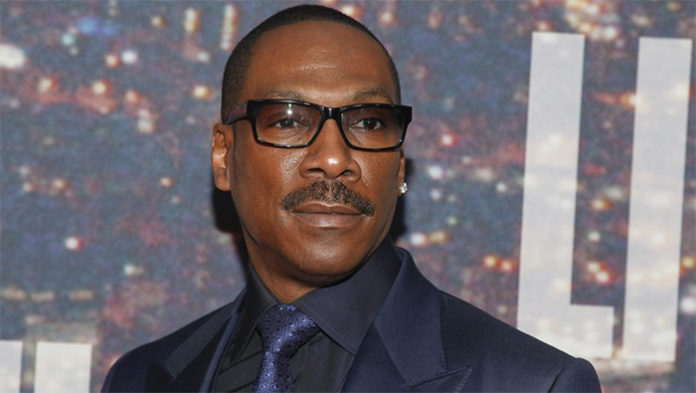 Eddie Murphy is an American comedian who initially rose to prominence in the early 80’s as a cast member on the late-night sketch comedy, Saturday Night Live. Often glued to the television screen growing up, Murphy was able to perform startling impressions of characters such as Bullwinkle and Bugs Bunny as a young boy. Eventually determined to step into the show biz, he began writing his own comedy routines by the time he was fifteen. During his late adolescent years, he worked as a stand-up comedian in a handful of local clubs and bars. With his eyes set on the comedy scene, he eventually made his way up into various major venues such as the popular New York City Comic Strip. Towards the end of the 1970’s, he learnt that the popular comedy series Saturday Night Live was searching for a new black cast member and immediately jumped at the opportunity. Although he initially started off as an extra, his comedic talents later earned him a regular part in the show.

Quickly rising in popularity, Murphy soon became one of the most well-recognized comedians on television. Two years into Saturday Night Live, he made film debut in the action comedy, 48 Hrs. (1982) alongside actors Nick Nolte and Annette O’Toole. From there, he eventually starred in Best Defense and Beverly Hills Cop in 1984. Some of his other works from the 80’s include The Golden Child (1986), Beverly Hills Cop II (1987), Coming to America (1988) and What’s Alan Watching (1989). A five-time Golden Globe Award nominee, he has also been honoured with three Kid’s Choice Awards, a Saturn Award, a Screen Actors Guild Award, and an Annie Award, amongst a few others. The sixth-highest grossing actor in the country, Murphy’s films have grossed well over $6 billion altogether across the globe.

Aside from being an established comedian and actor, the former Saturday Night Live star is also a singer. As a solo music artist, he released two memorable hits during the late 80’sーPut Your Mouth On Me and Party All the Time. His debut album, How Could It Be was released under Columbia Records in 1985; he later went on to release So Happy and Love’s Alright in 1989 and 1993 respectively. Although he hasn’t recorded any full-length albums since, he did come out with a few singles these past few years including Promise (You Won’t Break My Heart) (2013), Temporary (2014), and Oh Jah Jah (2015). On top of everything, Murphy has also lent his voice to a number of animated films such as Mulan, The PJs, and Shrek.

So what has the renowned comedian and actor been up to these days? Where has his work brought him in the recent years? What happened to Eddie Murphy? Where is he now in 2018? 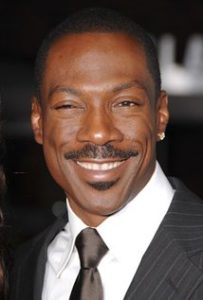 Born on April 3, 1961, in Brooklyn, New York, Eddie Murphy (Birth name: Edward Regan Murphy) is the son of Charles Edward and Lilian Murphy, an amateur comedian and telephone operator respectively. As a young boy, he spent most of his childhood in the neighbourhood of Bushwick with his family. When he was three years old, his parents divorced; his father later passed away in 1969. Following the ordeal, his single mother grew ill and was eventually hospitalized for a prolonged period of time; as a result, Murphy and his older brother Charles spent one year in the foster care system. After recovering from her health scare, his mother remarried a man named Vernon Lynch; together, the family relocated to Roosevelt, Long Island in the early 1970’s.

Growing up, Murphy had always had a thing for impersonations. In fact, he was known for his convincing Bugs Bunny and Bullwinkle impressions as a child. While he was never considered to be a studious student, he did excel at a game known as “ranking”ーone in which players trade witty insults with each other. By the time he was fifteen, Murphy had dazzled crowds with an impression of Al Green at the Roosevelt Youth Center. With his eyes set on becoming a professional comedian, he began writing and performing his own comedy routines in the subsequent years.

In attempts to “put himself out there”, he started to perform stand-up at a number of local clubs and bars in his late teens. After graduating from high school, he went to Nassau Community College and worked part-time at a shoe store, to his mother’s requests. Never having given up on his dreams, he continued to perform in local venues at night; before long, he had worked his way into the well-known Comic Strip of New York City.

Towards the late 1970’s, the popular late-night comedy sketch, Saturday Night Live advertised that they were recruiting a black cast-member for the upcoming season. Ecstatic, Murphy immediately jumped at the opportunity and auditioned for the partーsix times. With much perseverance, he eventually landed a role as an extra. 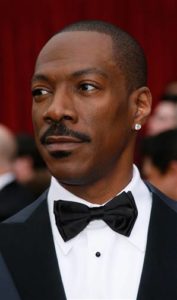 As an extra, Murphy appeared from time to time on the late-night comedy sketchーthat is, until one critical night, when the show’s producers realized that they had run out of material yet still had four minutes of airtime left to go. With this, they urged the aspiring comedian in front of the cameras, who was then told to perform one of his personal stand-up routines; he later improvised one known as “Masterful.” Impressed by what he was able to put forth, the producers would later invite him back as one of the two regular cast members on the show’s next season.

Entertaining the audiences over the next couple of years, it wasn’t long until Murphy became one of the best-known comedic presences on televisionーin fact, he was hugely credited for helping to revitalize the comedy series in the initial parts of the 80’s. A few of his stand-out characters from this time included a grown-up version of Buckwheat from the comedy short Little Rascals and a street-wise spoof of Fred Rogers named Mr. Robinson. For his performance and writing on Saturday Night Live, Murphy received three Primetime Emmy Awards (e.g. Outstanding Individual Performance in a Variety of Music Program, Outstanding Supporting Actor in a Comedy, Variety or Music Series).

Eddie Murphy’s Career as an Actor 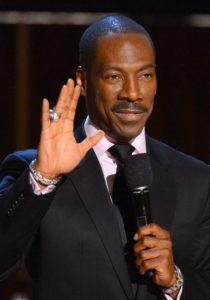 At the age of twenty one, Murphy made his film debut in the action comedy, 48 Hrs. alongside actor Nick Nolte. Often credited as one of the first “buddy cop” motion pictures, it opened in theatres in December 1982; it was also film producer, Joel Silver’s first major project. Directed by Walter Hill, it revolved around a hardheaded police officer who reluctantly joins forces with his witty criminal parolee, in attempts to track down a wanted murderer.

Critically acclaimed upon its release, it grossed well over $4 million during its opening weekend; it later became the 7th highest-grossing movie of the year. Applauded for the chemistry between the two main charactersーJack Cates and Reggie Hammond, who were played by Nick Nolte and Murphy respectively, it received multiple awards and nominations including an Edgar Allan Poe Award for “Best Motion Picture.” Despite the fact that it was his first time on the big screen, his portrayal in the film also earned Murphy a Golden Globe Award nomination for “Best Male Acting Debut.”

Following the success of his motion picture debut, Murphy starred in another comedy the next year called Trading Places alongside co-star Dan Aykroyd. Written by Herschel Weingrod and Timothy Harris, it told the story of a homeless street hustler and an upper-class broker whose lives ultimately end up crossing after the two are made part of an elaborate bet. Often referred to as a modern rendition of Mark Twain’s The Prince and the Pauper, it earned over $7 million during its opening weekend, making it the 3rd highest-grossing film at the time. Described to be “an immensely appealing social satire,” Trading Places received nothing but overwhelmingly positive reviews upon its release. A huge box office success, it later went on to earn over $90 million from a $15 million budget. Once again praised for his performance, Murphy received a Golden Globe Award nomination for “Actor in a Leading Role (Musical or Comedy) in 1984.

Carrying on with his booming film career, Murphy returned to the big screens the following year for the action comedy, Beverly Hills Cop (1984). Noted for propelling the comedian into international stardom, the movie centred around a street-smart cop named Axel Foley, who travels to Beverly Hills, California, in order to try to solve a previous murder crime, in which one of his close friends fell victim. A blockbuster, Beverly Hills Cop was released in theatres in December 1984; a huge success, it debuted at number one at the box office and quickly raked in over $15 million from its first five days of showing.  Included in The New York Times’ list of “1000 Best Movies Ever Made”, it currently holds an impressive 83% approval rating on review website, Rotten Tomatoes. While Murphy played the part of Axel, actors John Ashton, Judge Reinhold, Ronny Cox, Jonathan Banks and Steven Berkoff appeared as supporting characters. The highest-grossing film of its year, Beverly Hills Cops went on to earn Murphy another Golden Globe Award nomination for “Best Motion Picture Actor in a Comedy/Musical.”

Throughout the next few years, the comedian-turned-actor continued to star in a handful of films including The Golden Child (1986), Coming to America (1988), Harlem Nights (1989), Another 48 Hours (1990), Boomerang (1992), and The Distinguished Gentleman (1992); he also reprised his role as Axel in Beverly Hills Cop II in 1987. However, it wasn’t until 1996 that he received another big break when he was cast as the lead character in the comedy sci-fi flick, The Nutty Professor. A modern remake of an earlier 1963 film, it centred around a kind-hearted university professor named Sherman Klump, who is morbidly obese; to his excitement however, he later develops a miraculous weight-loss drug which he then tries on himself. A major hit, it grossed over $25 million during its opening weekend and was met with mostly positive reviews from critics. For his performance, Murphy received a Golden Globe Award in 1997.

What Happened to Eddie Murphy – News and Updates

This September, Murphy starred as the title character in the drama movie, Mr. Church. Originally premiered at the Tribeca Film Festival, it revolved around the unique, and heart-warming relationship between a little girl and a talented cook. Aside from Murphy, who played the part of Mr. Henry Joseph Church, other cast members in the film included Britt Robertson, Xavier Samuel, Lucy Fry, Natascha McElhone and Christian Madsen. While the actor received praised for his performance, Mr. Church was generally met with negative reviews; it currently holds a 15% approval rating on Rotten Tomatoes and a 37/100 score on Metacritic.

Aside from that, it has been announced that Murphy will be working on a few films in the upcoming year including Triplets, Richard Pryor: Is It Something I Said? and Beverly Hills Cop 4.