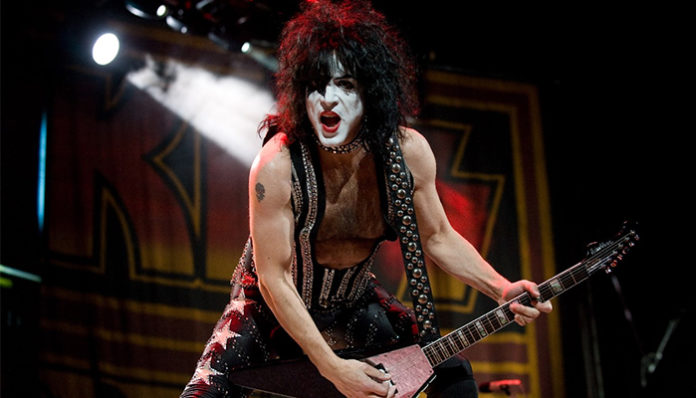 Paul Stanley is an American singer-songwriter who is most well-known for being the guitarist and vocalist of the rock band, Kiss. Raised in a household that was often filled with classical music, he developed an interest in Beethoven’s works early on in his life, despite the fact that he’s unable to hear with his right ear due to a birth defect. Later inspired by artists such as Jerry Lee Lewis and Eddie Cochran, Stanley took up singing, a hobby which both loved and enjoyed. When he was seven years old, he was presented with a children’s guitar as a present, something which he grew extremely fond of. At the age of thirteen, he was given his first real guitar; although it was of the acoustic variety, and not electrical as he had hoped, he soon began playing the tunes of some of his favourite artists such as The Byrds, Bob Dylan, and The Lovin’ Spoonful. After playing in a couple of local bands, Stanley joined the rock group, Wicked Lester in the early 1970’s.

Recruiting the help of veteran drummer Peter Criss, the band (which now consisted of Gene Simmons, Paul Stanley and Criss) began performing together, while experimenting with their overall image and style. Although they were unsuccessful at securing a recording contract with Epic Records, with whom they’d wanted to sign with initially, they were later offered a deal with Casablanca Records in 1973. With everything set in place, Stanley and the groupーwhich they’d since renamed as Kissーheaded off to the studios to begin working on their music. Their self-titled debut album, Kiss was eventually released a year later in 1974; it was soon followed by Hotter Than Hell later that same year. Since then, the rock band has released a total of twenty full-length albums, thirteen compilation albums and a whopping sixty singlesーmany of which have made its way onto the charts. Inducted into the Rock and Roll Hall of Fame in 2014, Kiss has sold well over 100,000,000 records across the globe.

Although Stanley is mostly known for his work with Kiss, he has released two solo albumsーPaul Stanley and Live to Win, which are spaced twenty eight years apart. In support of his second album, he also hit the roads for a theatre tour in 2006. Aside from his musical endeavours, the musician has also appeared in a small handful of television series including Action League Now!!: Rock-A-Big-Baby (1997), Millennium (1998), Detroit Rock City (1999), Family Guy (2001), and Rock N’ Roll Fantasy Camp (2011), to name a few. An inductee of the Long Island Music Hall of Fame since 2006, he has received a number of awards throughout his career including a Classic Rock Award, a Classic Gold Telly Award, and a Sounds Partners Lifetime Achievement Award.

So what has the rock star been up to these days? What are some of the latest projects that he’s been working on? What happened to Paul Stanley? Where is he now in 2018? 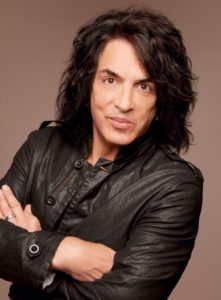 Born on January 20, 1952, in Manhattan, New York City, Paul Stanley (Birth name: Stanley Bert Eisen) spent his early childhood in the Inwood neighbourhood, with his older sister Julia; his mother had fled from Nazi Germany and his father originated from Poland. Growing up, Stanley was often surrounded by music as his parents often filled the house with classical tunes and light opera. Although he suffered from a birth defect which caused him to be hard of hearing in his right ear, he enjoyed music thoroughly and was especially fond of Little Richard, Eddie Cochran, Jerry Lee Lewis and Dion and the Belmondsーhe was also a fan of Beethoven’s classical pieces. Later taking up singing as a grade schooler, he was given a children’s guitar when he was seven years oldーsomething which he adored and spent much time playing.

At the age of eight, Stanley and his family relocated from Manhattan to the Kew Gardens area in Queens. During that period, he listened to The Rolling Stones and The Beatles for a fair bit, as they were at the height of their popularity in the 1960’s. When he was thirteen years old, he was given a first real instrumentーan acoustic guitar. Although it wasn’t of the electric variety that he’d preferred, he treasured it and used it to play a number of tunes from artists such as The Lovin’ Spoonful, The Byrds and Bob Dylan. Aside from his musical talents, Stanley was also a gifted graphic artist. As a teen, he went to New York City’s High School of Music & Art, where he later graduated from in 1970. Despite his skills in the area however, he later abandoned that career path, instead opting to perform with a number of bands.

In the late 1960’s, Stanley played in several local bands including ones called Rainbow, Post War Baby Boom and Uncle Joe. When he was in his early twenties, he joined a rock band called Wicked Lester, which he learnt about through a friend. Although they went on to record an album in the early 1970’s, it was never officially released. Wanting to recruit a couple of new members into the group, they later responded to an advertisement in the Rolling Stoneーone which had been placed by a drummer named Peter Criss. Impressed with his audition, the band eventually welcomed him into the band; a few months afterwards, guitarist Ace Frehley also joined the group. From there, they then changed their name from Wicked Lester to Kiss. 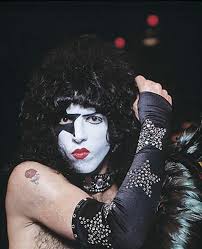 After securing a recording deal with Casablanca Records in November 1973, Kiss released their self-titled debut, Kiss in February 1974. Featuring material that was written by Stanley and Gene Simmons, the album came with ten heavy metal tracks, three of which saw the singer on lead vocals (e.g. Strutter, Firehouse, 100,000 Years). A major hit, the album received favourable reviews from many criticsーwith many applauding it for its amazing riffs and melodies. A few stand out titles from the track-list include Black Diamond, Cold Gin, Let Me Know, and Love Theme from Kiss. Despite having been given close to perfect scores from many reviewers, Kiss only achieved mild success on the charts; it peaked at number eighty-seven on the Billboard Pop Albums Chart in the US, where it stayed for a period of twenty-two weeks. Later spawning three singles, the band also embarked on a tour, which began in Edmonton, Alberta, to promote the album. As of 1977, it has been certified Gold by the RIAA for selling over 500,000 copies in the country.

Following two album releases in 1974 and 1975, Kiss released their first Multi-Platinum studio album, Destroyer in March 1976. Recruiting the help of well-known Canadian producer Bob Ezrin, who had worked with Alice Cooper previously, it was the first album to feature musicians outside of the band. Recorded in between a couple of years, it came with ten hard rock songs including King of the Night Time World, Great Expectations, Do you Love Me, Rock and Roll Party, and Sweet Pain. Another major success for the band, it quickly sold 850,000 copies, peaking at number eleven on the Billboard 2000. Praised by a number of critics, Destroyer also reached number three on the US Tastemaker Chart and number four on the US Catalogue Chart; outside of the US, it also charted in many countries including Australia, Canada, Sweden, New Zealand, Japan and Germany. Dubbed as one of the Greatest Albums of All Time by many publications such as Rolling Stone, Guitar World and Blender, it later went on to spawn four albumsーShout it Out Loud, Flaming Youth, Detroit Rock City, and Beth. 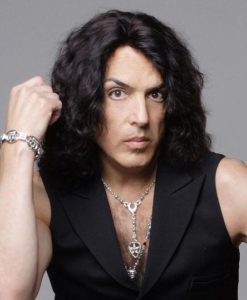 The next year, they released their sixth studio album, Love Gun in June 1977. Produced with the help of Eddie Kramer, it is noted for being the first album to feature Ace Frehley as a lead vocalist. Another successful effort for Kiss, it showcased ten tracks, three of which (e.g. I Stole Your Life, Tomorrow and Tonight, Love Gun) were written by Stanley. The group’s best charting album at the time, it peaked at number four on the Billboard Pop Albums Chart in the United States; it also reached the top ten in Canada, Sweden and Switzerland.

Praised for its thunderous title track, Shock Me, it received top ratings from critics at Allmusic, Blender and Pitchfork. The last album to feature their original lineup, it eventually produced two singlesーLove Gun and Christine Sixteen. Love Gun has since been certified Platinum for exceeding over one million copies in sales.

Carrying on with this recording throughout the next decade, Kiss released a number of albums in the early part of the 80’s including Unmasked (1980), Music from “The Elder” (1981), Creatures of the Night (1982), and Lick It Up (1983). In 1984, they released Animalizeーtheir biggest-selling album since Dynasty in 1979. Produced wholly by Stanley, it was also the only album to feature Mark St. John on guitar as he later left the group after being diagnosed with Reiter’s Syndrome. Their second record with the Mercury label, it contained nine heavy metal and glam rock tracks including Lonely is the Hunter, Under the Gun, While the City Sleeps, and Murder in High-Heels. Although it wasn’t a chart-topper by any means, it reached a respectable number nineteen on the Billboard 200; it also charted in a number of other countries including Switzerland, Sweden, Finland, Canada, Austria and Australia. Since its original release, it has been certified Platinum in the USーmaking it their sixth album to achieve such a feat.

Three years later, Kiss released Crazy Nights in September 1987. The second album to feature the band’s new line up with Eric Carr and Bruce Kulick, it’s also their first to introduce keyboards. Boasting lighter metal sounds compared to their previous works, it consisted of eleven tracks, a handful of which were co-written by Stanley. Although it was panned by many critics, it later became Kiss’ highest-charting album of the 80’s. Crazy Nights went on to peak at number eighteen on the US Pop Albums Chart and was eventually certified Platinum by the RIAA in 1988.

Stanley has been spending much of this year performing with his R&B cover band, Soul Station. In February 2016, he held three concerts in Californiaーmore specifically in San Juan Capistrano, Agoura Hills and Pasadena. Don’t worry if you missed out on the show, according to the star’s official website, they will be hitting the stage once again this upcoming February in the same cities, with the addition of Solana Beach and Agoura Hills. Tickets are on sale nowーbe sure to grab yours before they sell out!

Aside from the shows, Stanley has also recently made a guest appearance in Fire and Water, a track from Ace Frehley’s cover album, Origins Vol 1.