Stacy Erwin has always loved fitness, but when he was in college, he couldn’t fit it into his schedule. He is looking for a way that was both easy and inexpensive to manage workout routines with a busy schedule. He had the idea to add resistance to his everyday activities by using two rubber straps which attached to each leg. This was the basis for the Fitness Stride, and would allow the user to get resistance sitting at an office desk, or doing housework. Would the Sharks bite at this “impressive” new fitness product? Let’s take a look. 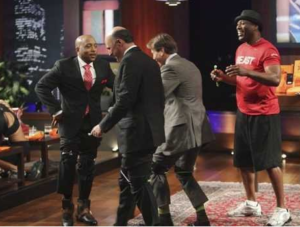 Stacy Erwin walked out into the Shark Tank, and onto the stage. Stacy was flanked by two beautiful women. Stacy introduced himself to the Sharks and told them that he was looking for an investment of $140,000 in exchange for 15% of his company, Fitness Stride. Stacy claimed that his product was so good that he was going to serve it the Sharks on a silver platter. He continued, claiming that was the solution to the obesity problem in children. He said that it also solves lower back pain, redness, as well as tightening your abs. The Fitness Stride tones, shapes, and forms women’s hips, butt, and thighs. He also claimed that it allowed athletes to run faster and longer without any extra training. Stacy said that every other piece of fitness equipment on the market requires time. His product, Fitness Stride, would allow the consumer to get in shape while multitasking.

As an example, Stacy asked the Sharks to count how many times Megan raised her knee versus how many times the other girl, Zeena, raised hers. Megan raised her knee four times while Xena only raised hers two. Stacy claimed that they both brought up their knees the same amount of occasions because Zeena was wearing resistance. Stacy said that curling his hand twice with nothing in it was not as good as curling it with a 20-pound weight. He stated that you could burn more calories while sitting down on your desk and not doing anything then walking on a treadmill for 45 minutes. Robert laughed and asked how that would be possible. Stacy said that he would tell him.

Stacy handed a Fitness Stride sample to Robert and asked him to pull on it. Stacy told Barbara that he had something special for her, and called her baby girl. Barbara looked uncomfortable but said that she would like to hear more about it. The woman that Stacy brought with him walked around to each male Shark and fastened the Fitness Stride to their knees. Robert joked that he hoped his wife would never see this part. Stacy instructed the Sharks to open their knees with the Fitness Stride on them and just hold them open without moving. Kevin asked if he was burning calories just by moving his knees. Stacy told him that he didn’t want Kevin to move it all. Kevin said that it was starting to hurt, and it was hard to do. Kevin told Stacy that The Fitness Stride was going to kill him since it was starting to burn.

Robert asked if he would be able to walk with it. Stacy informed him that he would be able to walk, run, or job. He told him to come to the stage. Robert obliged and waddled up to the stage. He said that he didn’t feel very cool doing that. Kevin and Daymond got up and try it to walk around as well. Barbara buried her head in her hands and was laughing hysterically. Robert said that he didn’t really get it even though he was an athlete. Stacy said that if Robert were to run 2 miles with the Fitness Stride on, the workout effect would be as if he ran 5 miles. Robert stated that a person would not be able to run with it. Stacy claims that if he was having a hard time running with it, it was just because his connective tissues were weaker than he thought. He insisted that it was the same as running in waist-high water, as compared to running on dry land.

Kevin goes right into the business side, asking the Beast what he sold the Fitness Stride for, as well as what they cost to make. He said that the retail price was $49.95, which got the customer two sets of color-coded power bands. Stacy said that that provided 36 different resistance combinations. Kevin asked him what it cost to make, and Stacy stated that they cost $10 each in China. Stacy said that Foot Locker buys them for $30 wholesale. Daymond asked him if he was already in Footlocker. Stacy explained that he was in Foot Locker, as well as Lady Foot Locker, East Bay, Champs, and other websites.

Daymond wanted to know if the business has been growing over the years, or if he was just getting steady sales. Stacy said that he was having a problem with the product. He stated that no one knew that it was in those stores. Robert asked him what his sales were like last year. Stacy told him $150,000. Robert wants to know what he made on the $150,000. Stacy informed him that he made about $60,000. Daymond said that he was evaluating his company at $900,000. Stacy looks surprised. He claimed then he didn’t value his company that high. Daymond said that with his investment as, that’s exactly what he did.

Robert wanted to know why he valued at so high. Stacy claimed that there was value in the patent, and David asked him if he was evaluating the patent that half a million dollars. Stacy said that was about $400,000. Robert let him know that he would have to sell a lot of Fitness Strides in order to make his company worth that much. He asked him for a plan. Stacy said that he planned on getting the Fitness Stride onto infomercials. Kevin Harrington piped up, saying that Stacy was claiming a lot of things for his product going as far to say that he was promoting peace in the Middle East. Kevin stated that he was only getting a burn in his thighs, and didn’t see it as a total body workout. Stacy raised his hand and said that he wanted to ask Kevin a question. Stacy asked what part of the body running effects, and claimed that it affected the entire body since you weren’t going to leave your arm in the corner while you’re running.

Kevin Harrington wanted to know if he had any before after pictures from people who have used it. Stacy said that he had helped a woman lose 150 pounds. Kevin pointed out that that was one case study. Robert stated that he could not see Kevin O’Leary, who doesn’t even go to the gym, going home and buying the bands and actually using them. Kevin smiled patiently and said that he could kick Roberts ass and squash any time. O’Leary stated that the Fitness Stride was a marketing Nightmare, and he went out. Robert said that he had no idea if the Fitness Stride worked or not, but he knew that it would need hundreds of thousands of dollars in order to market it. Robert also went out.

Kevin Harrington said that he’d looked at about 100 fitness products in the past year. Most of the ones that he looked at had a big testimonial base of people who would use the product and see results. Since he didn’t see that with this product, Harrington went out. Daymond told Stacy that the value of the company was too high, which would make it too rich of a deal for him. He said that he’d have to go out. Barbara told Stacy that she loves his hustle and his butt, but she wasn’t sold on the product. And she also went out. Kevin thanked Stacy for his time but told him that he need to make money now, so Stacy had to leave. Stacy laughed and walked off the stage. Daymond said that he wouldn’t talk to a big muscly guy like that. Barbara agreed, telling Kevin not to mess with him.

Fitness Stride Now in 2018 – The After Shark Tank Update 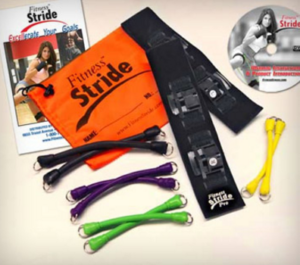 After failing to make a deal in 2011, Fitness Stride appears to have all but vanished. Their Facebook page still exists, but hasn’t been touched since right after they appeared on Shark Tank. It only has a hundred and fifty-seven likes. Their website also still technically exist, but the only message on the site is “We are currently out of stock. Thank you very much.” Fitness Stride has been featured on several blogs as one of the top 10 worst Shark Tank pitches ever.