Before appearing on Shark Tank, the entrepreneurs behind Frends made over a million dollars in sales revenue. The business began when Keir met up with a few of his snowboarding friends and decided that they would create a business together. The name comes from this group of friends, with the I removed because there’s no I in Frends. Would the Sharks buy into this company with their seemingly incredible track record of sales? Or would they discover something that would stop them from investing in Frends? Let’s take a look. 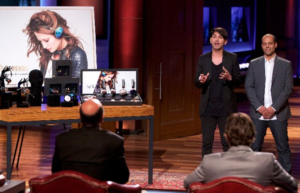 Keir Dillion and Sheen Moehlman walked out into the Shark Tank, and onto the stage. They introduced themselves to the sharks and requested 1 million dollars in exchange for 7.6% of their company. Sheen explains that over the past couple years headphones have become a necessary part of life instead of just a fashionable accessory. Sheen claimed that the current headphones available were not fashionable. There’s nothing on the market that would excite a female customer the same way a piece of jewelry or a new handbag would. With their company, Frends, they set out to make headphones a fashion accessory that women would actually like to wear. The caps on the end of the headphones were interchangeable, which would allow the wearer to accessorize with any outfit.

The interchangeable caps on the end of the Frends headphones would allow a female wearer to match their mood as well as their personality. The two designers took their inspiration from the runway. A new collection of the headphone caps is released each season. Sheen ended the presentation by asking the sharks to invest in their company. Sheen and Keir began to hand out some samples to the Sharks. The Sharks each took a pair of the headphones. Lori turned them over in her hands and said that they were gorgeous. Mark put his on his head and asked Ashton Kutcher who was the guest shark on the show what he thought. Ashton told Mark that his headphones also looked pretty.

Robert as the two entrepreneurs how much the headphones were selling for. Scene explained the headphones were selling for $150 for the smaller ones and the larger ones for $200. Robert addressed the crazy valuation for the company, letting him know that they had a 12 million dollar cost. Robert says the friends must have a ton of sales. Keir stated that they had a ton of demand, and that’s why they were meeting with the sharks. Mark advised them that sales and demand or not the same thing. Keir let them know that they did 2.9 Million Dollars last year, and they were on target to meet six million dollars this year. Kevin inquired about the distribution channels that they used. Keir said that they sold through Nordstrom, Bloomingdale’s online, and Anthropologie online.

Robert ask them why they did not hit their intended sales goal last year. Keir told him that they first launched in 2012, with the two largest electronic retailers who were Apple and Best Buy. Ashton asked how much they made in 2013, and Keir told him 2.5 million dollars. Mark wondered how much they made from the 2.5 million dollars, and Keir said that they ended up losing 1.3 million dollars. Ashton looks shocked. Robert asked them how they ended up losing the money. Keir let them know that it was a consignment deal, so they shipped out the inventory in advance, and they only got paid once the merchandise sold. Kevin told them that that was a bad outcome. Robert asked how Frends was able to absorb the loss.

Mark ask them if they thought that they were going to make six million dollars over Christmas. Lori asked them why they thought they would make that much. Kira said that they were launching into mass fashion with the new piece that they had which was a Bluetooth necklace. Kevin stated that it was an interesting piece of jewelry. Lori wants to know how much it would cost. Keir said that it would cost $300 to $500 for the end customer. Kevin sounded shocked. He said that it was too expensive for Consumer item. Lori wants to know how much Frends cost was, and Keir told her but it cost $60 per unit.

Ashton asked if the new sales projections were coming from sales of the Bluetooth necklace. Keir said that part of it was, but it was mostly just the standard distributions. Kevin asked what sales will look like next year in their most optimistic scenario. Kerr told him that they were projected to make 34 million dollars. Robert said that was pretty optimistic. Kevin stated that they would have to put the business on steroids to meet that goal. He asked what their profit would be off of 34 million dollars. Keir said that they would get 3 million dollars from the amount, but that’s because they were investing back into the business. Kevin called them cockroaches as a Bluetooth headphone Market. Keir said that he knew, and that’s why they were on the Shark Tank. Kevin asked how much they had lost since the Inception of their business, and Keir told him that they lost nine million dollars.

Kevin let them know that he saw a scenario where they would run out of cash, and go down to zero. He went out. Ashton told them that they had something cool, but they were in a really crowded space. He did say that when they explained their business, it made them seem like they didn’t have their stuff together. It made him feel like they were hiding something. Ashton said that he was going to pass, and he went out of the bidding. Lori stated that Frends headphones look very nice, but she didn’t have any faith in the way that they are running the business. They have lost too much money. Lori went out, saying that she couldn’t invest in a company like that.

Robert agreed that the headphones look nice, but he didn’t think that there is a huge market for the headphones at the $300 to $500 price range. He was also concerned that they had lost a ton of money, and they weren’t out of the woods yet. He said that their projection to go to 34 million dollars and the next year was astronomical and that short period. He went out. Mark told them to put aside the losses, which were not uncommon in a start-up electronics company. Mark continued saying the from the investors perspective; it was really a million dollar bet on the Bluetooth necklace. The necklace was going to be the foundation for the 60% sales at Christmas. He was not comfortable with the unique chance at the million dollar valuation. He went out. They walked off the stage, and Ashton said that in a business wasn’t bad but the entrepreneurs behind Frends had not been honest about it. Let’s see how they do without an investment from the sharks.

Frends Now in 2018- The After Shark Tank Update 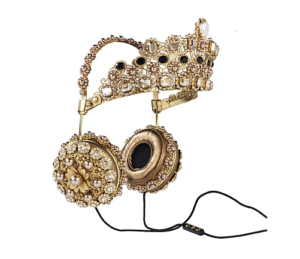 Since failing to get an investment deal with the Sharks, sales have still been going strong on the Frends website. Their social media pages are still active, and they post at least once per day on Facebook. The Frends website features pictures of celebrities wearing the stylish headphones, such as Rihanna, Britney Spears, and Jessica Alba. The company has been featured in many fashion magazines like Vogue, Elle, Bazaar, Glamour, and Cosmopolitan. It looks like they were able to benefit from the Shark Tank effect, despite failing to get a deal with the Sharks.