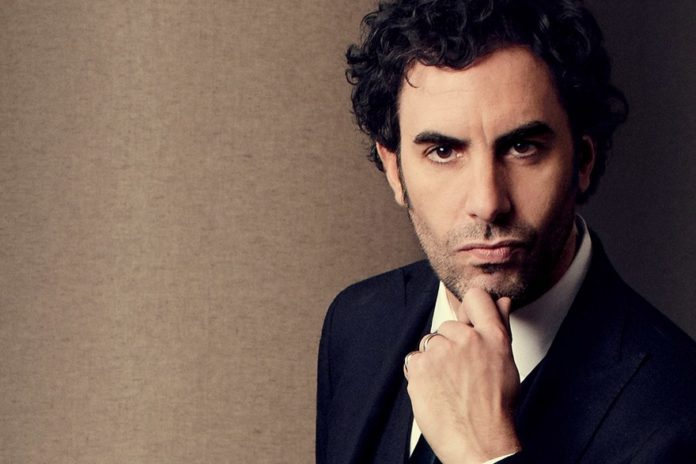 Sacha Baron Cohen is someone who made waves during the mid-2000’s with his comedy film Borat. Baron Cohen is known for a style of comedy that is similar to a lot of hidden camera stunts that are popular today. He takes the role of a certain character and interacts with unknowing people in wacky ways, to humorous results. This interesting brand of comedy film is practically Baron Cohen’s trademark, but in recent years, films like these haven’t really seen the light of day. What is Sacha Baron Cohen doing today? In this article, I’ll discuss his rise to success in the entertainment industry, while also making sure to take some time to discuss what he has been up to more recently. Without further delay, let’s try to learn all that we can about this famous Hollywood jokester.

Sacha Noam Baron Cohen was born in October of 1971 in Hammersmith, London. Growing up, he received an education from the Haberdashers’ Aske’s Boys’ School in Hertfordshire. In higher education, he studied at the University of Cambridge, where he studied history. While attending Cambridge, Baron Cohen received his first real taste of performance when he was a member of the Cambridge University Amateur Dramatic Club. As a member of the club, he acted in various small productions. Baron Cohen graduated from the school in 1993, and he went on to become a part-time fashion model. He also ventured into local television for a time, when he hosted various weekly broadcasts on local cable television. When Channel 4 was searching for a new program, he saw this as an opportunity to promote his comedy career. He sent in an audition tape that featured the character of Kristo, who would eventually evolve into the famous Borat character that we all know today. Although Borat did not receive his own show, he was able to host Pump TV for a year or so. 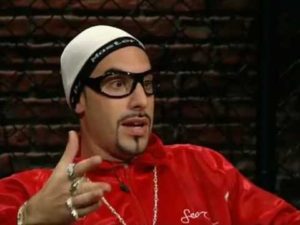 By 1996, Baron Cohen remained unfulfilled by the small television and hosting roles that he was being given. In an interesting career move, he went to Paris to undergo professional clown training, which he felt would help him to hone his skills as a comedic actor. In 2000, Baron Cohen saw his film debut in the comedy movie The Jolly Boys’ Last Stand, which was a low budget, direct to video release. He didn’t really see his career take off until he introduced the world to Ali G, a character meant to parody the “rude boi” figures in Surrey. Ali G began with appearances on local television, but by 1999, he was was winning awards for his portrayal in the 1999 British Comedy Awards. In 2000, he was given his own show with Ali G, fittingly titled Da Ali G Show. The program was critically acclaimed, and it would end up winning the BAFTA for Best Comedy in 2001. The interesting thing about Da Ali G Show is that it features sketches that use some of Baron Cohen’s soon-to-be-iconic characters, including Borat Sagdiyev and Bruno Gehard.

In 2002, Baron Cohen released his very first film featuring one of his characters: Ali G Indahouse. The film, which was distributed both in the United States and in the United Kingdom, was highly popular among local audiences. HBO ended up picking Da Ali G show up for two more seasons, but following its third season in 2004, the show ended. With this, Baron Cohen made the decision to retire the character of Ali G. (This is something that he would do quite frequently. Since a lot of the comedy surrounding these characters relies on interviewees being unaware that they’re being had, Baron Cohen will often retire characters when they become too recognizable.) With that aspect of his career behind him, Sacha focused on finding a new way to promote his comedy career. With that, he began work on a new film. 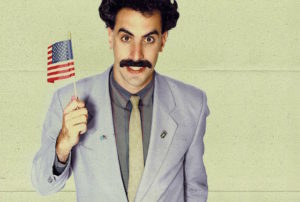 As you may already know, Borat would go on to become one of Sacha Baron Cohen’s most iconic works. The film was first screened at the 2006 Toronto International Film Festival, and it was released in the United Kingdom and United States in November of that year. This is a movie that was surrounded in controversy before it even released. Since most of the scenes were completely unscripted, many cast members objected to and openly protested to some of the film’s content. Borat debuted at the top of the box office, and it ended up making over $260 million over an $18 million budget. The film was controversial for many reasons, with many activist groups defaming the film for its alleged antisemitism, misogyny, and racism. Borat was actually banned in all but one Arab country. However, despite all of this controversy, the movie was still very critically successful. It ended up winning Baron Cohen a Golden Globe award for Best Actor in a Motion Picture – Musical or Comedy. It was also nominated for Best Adapted Screenplay in the Academy Awards.

Following the success of this movie, Baron Cohen continued to profit off of Borat’s fictional fame by publishing a travel guide that was written in-character. However, just as with any other one of his characters, Borat had become too popular. Sacha Baron Cohen retired him in December of 2007, and he focused his attentions on another one of his characters: Bruno Gehard. Major Hollywood companies got into an aggressive bidding war over Bruno’s film rights, with Universal Pictures eventually spending $42 million to buy rights to the film. In July of 2009, the film Bruno was released, and it ended up making around $138 million in the box office. This is obviously not quite as successful as his earlier film was, but it was still a relatively strong showing. Critically, the movie was seen as less intelligent and deliberate than Borat, with some arguing that the film was much too indelicate. Since Bruno is a flamboyantly homosexual man, his portrayal was subject to a lot of criticism from various LGBT rights groups. 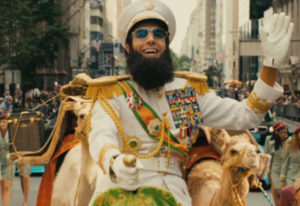 Baron Cohen introduced a brand new character to the mix in 2012 with the release of The Dictator. This film starred Admiral General Aladeen, who was written as a direct parody to Muammar Gaddafi. The Dictator, which was much more politically charged than a lot of Baron Cohen’s previous works, ended up earning $179.4 million on a $65 million budget. The film featured guest appearances by such celebrities as Fred Armisen, Megan Fox, John C. Reilly, and Ben Kingsley. Like Bruno, the movie received mixed critical reception. It was seen as being much more slapstick than some of Baron Cohen’s previous work, and some saw his parody of actual dictators as being borderline irresponsible. Even more controversy surrounded this character when Sacha Baron Cohen claimed that he was banned from attending the Academy Awards in character. Although this wasn’t true, the Academy made it clear that they didn’t approve of Baron Cohen treating their award show as a platform for a publicity stunt, to use their words.

Outside of these movies, Baron Cohen has also made a real name for himself through other forms of acting. You may not know this, but he actually provides the voice for King Julien in the animated film series Madagascar. In 2007’s Sweeney Todd: The Demon Barber of Fleet Street, Baron Cohen played the role of Adolfo Pirelli. In 2011, he had an appearance in the critically acclaimed family film Hugo, where he portrayed the lovable character of Inspector Gustave Daste. In 2012, he held a role in the smash hit musical film Les Misérables, playing the character of Thénardier. Despite what some may think, there is more to this guy’s talent than just his ability to make people laugh and pull different accents. With all of this in mind though, what has Baron Cohen been doing with his career more recently? Has he been working on any comedy (or dramatic) roles? What’s going on?

Baron Cohen’s last major film was released in 2012, and I think that his fans should be happy to know that he has been keeping busy more recently, too. Earlier in 2016, he released the film The Brothers Grimsby, an action-comedy movie about two unlike brothers. The film received very poor reviews, and it was a box office bomb. The movie couldn’t even break even, grossing $25.2 million on a $35 million budget. In 2017, Baron Cohen will be starring in an American remake of the classic Dutch comedy film Klown. Todd Phillips, perhaps best-known for directing The Hangover trilogy, is in talks to direct.