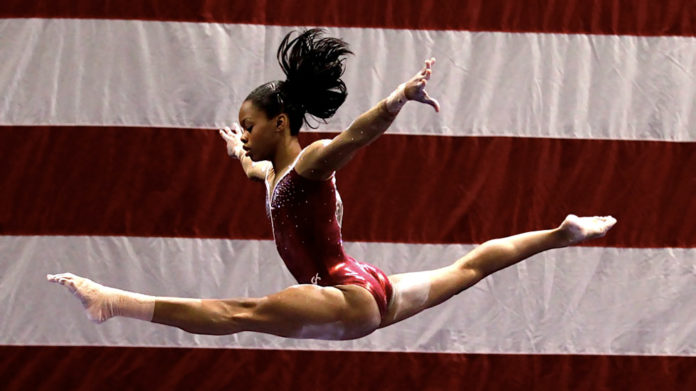 Gabby Douglas is probably one of the most successful gymnasts of our time. She’s only 21 years old, but her stellar performance in the Olympics have cemented her legacy as a gifted athlete. Believe it or not, Douglas is actually the first African-American (or person of African descent, period) to become an individual all-around champion. Needless to say, she is very well-respected in her given field. How much has Gabby Douglas been able to actually make off of her work in Olympic gymnastics?

How did Gabby Douglas make her money and wealth? 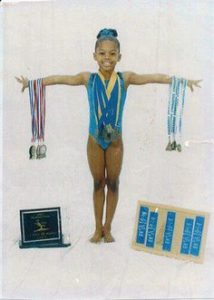 Gabby Douglas was born in December of 1995 in Virginia Beach, Virginia. When Gabby was just six years old, her older sister convinced their mother to enroll them in a gymnastics class. It was from there that Gabby would begin her training as a gymnast. She showed incredible promise at a very young age, winning the Level 4 all-around gymnastics title in the 2004 Virginia State Championships. Douglas was just eight years old at the time. As many young athletes do, Douglas eventually moved so that she could train in a more advanced facility with more accomplished coaches. She was just fourteen years old when her and her family moved to Des Moines, Iowa. Douglas moved to Des Moines to train at Chow’s Gymnastics and Dance Institute with Liang Chow, a highly accomplished Chinese gymnast. Gabby actually made the move to Des Moines all by herself, living with another family for a short period of time while the rest of her family stayed in Virginia so that her siblings could finish school.

Douglas’s junior debut came in 2008, prior to her arriving in Des Moines. Her first year was not all too notable, with her finished tenth overall in the all-around rankings at the US Classic in Houston. In the following year, she missed the majority of the major competition due to injury. In early 2010 she had a much better year, going so far as to win the uneven bars title at the 2010 Pan American Championships in Guadalajara. Her great performance in 2010 is what prompted her to move to Des Moines to train with Liang Chow. Although it seemed like a drastic decision at the time, her reasoning was sound enough. Gabby was beginning to show true potential in gymnastics, and so her and her family felt as though she would have the greatest chance at becoming truly great if she were able to take advantage of some greater coaching. As it turns out, this would be a great decision for Douglas and her career. 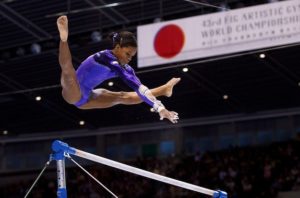 Gabby kicked off her senior career in 2011, and she performed extremely well in a couple of different contests. These contests included the City of Jesolo Trophy in Italy, the 2011 U.S. National Championships in St. Paul, and the 2011 World Championships in Tokyo. Her impressive showings in these competitions would be vital to her momentum in 2012, when she would make her Olympic debut. In 2012, Douglas had a stunning performance at the AT&T American Cup, where she received the highest all-around score among her female competitors. Despite this incredible score, she wasn’t able to actually win the competition because she was technically an alternate. This technicality didn’t seem to upset her too badly, though, because in March of that year she would go on to win gold in uneven bars at the Pacific Rim Championships. Douglas continued to impress on the uneven bars at the 2012 U.S. National Championships, where she won gold for her routine.

Her next big career move came in July of that year, when Douglas attended the 2012 Olympic Trials in San Jose, California. Gabby gave it everything that she had, and her effort paid off. She placed first in all-around rankings during the trials, which guaranteed her a spot on the women’s Olympic team. With that, Gabby had secured herself a ticket for the 2012 Summer Olympics in London. She would join the gymnasts Jordyn Wieber, McKayla Maroney, Aly Raisman, and Kyla Ross. This team, occasionally dubbed the “Fierce Five” put on an amazing show in London, and they ended up taking home the team event gold. On an individual level, Gabby Douglas absolutely blew away her competition. She competed in vault, uneven bars, floor exercise, and in balance beam. Her work in all four apparatus was so great that she was able to win gold in the individual all-around. Since she was the very first woman of color of any nationality to win this event, this wasn’t just a major accomplishment for Gabby Douglas. It was a major accomplishment for women around the world. 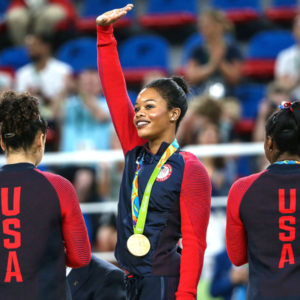 In the Olympic offseason, Gabby kept hard at work. In August of 2013, she officially ended her training with Liang Chow in order to move to Los Angeles with her family. In 2014, she would return to Chow to ensure that she would qualify for the next Olympic games. In July, she left Liang again, and this time she ended up finding a new coach in Kittia Carpenter. In 2015, she had a great competitive year. She helped the American team win gold in the team event at the 2015 City of Jesolo Trophy in Italy. She came in third place at the 2015 World Artistic Gymnastics Championships in Glasgow. Fans of Gabby may be disappointed to know that she had a more quiet year in the Olympics in 2016. She qualified for the team, and she was able to help the United States defend their gold medal in the team event. Although Douglas obviously didn’t become any less talented, she was in many ways outshined by teammates Aly Raisman and Simone Biles. Either way, her talent and influence in this sport cannot be denied.

Who is Gabby Douglas dating?

As you can probably imagine, being an Olympic athlete makes dating kind of a daunting prospect. Relationships take time, and that’s something that an athlete of this caliber may not have to spare. As of right now, it doesn’t look like Gabby Douglas is seeing anyone. However, that could obviously change at any time in the future. Right now she is just obviously more focused on advancing her career.

As an Olympic athlete, Gabby Douglas makes the majority of her money off of her sponsorships and occasional television engagements. It’s hard to determine exactly how much she makes off of these agreements, but it has been estimated that she has made approximately $750,000 in 2016. Keep in mind, though, that that’s just an estimate, and it could be a couple of notches above or below that figure.

How much does Gabby Douglas make per day?

If you use her salary estimate above as a starting point, then we can calculate Gabby’s daily income with some simple arithmetic. In a 365 day year, she makes around $2000 per day. That definitely isn’t bad for a 21 year old!

As a successful Olympic athlete, the majority of your income is going to come in the form of endorsement deals and sponsorships. Over the years, Gabby has had deals with brands like Kellogg’s, Nike, Capri Sun, CoverGirl and Gillette Venus. Although she didn’t directly receive any money from her gold medals in London, it has been estimated that those golds alone made her millions in future endorsement deals.

I don’t think that anyone can really deny Gabby Douglas’s incredible talent in gymnastics. She has definitely accrued some serious objective proof to back up that fact, too. She won gold all-around in the 2016 American Cup in Newark. In the 2011 and 2015 World Championships (in Tokyo and Glasgow, respectively) she won gold in the team event. At the 2012 Summer Olympics in London, Gabby won gold for the team event and for the all-around event. Most recently, in the 2016 Summer Olympics in Rio de Janeiro, she helped the United States win gold in the team event.

As an Olympic athlete, you’re representing your entire country. As a result, most Olympic athletes are expected to be strong role models. They’re expected to give back to their community in some way. Over the course of her Olympic career, Gabby Douglas has worked with charitable organizations like Right To Play, the Women’s Sports Foundation, and the Toys R Us Children’s Fund.