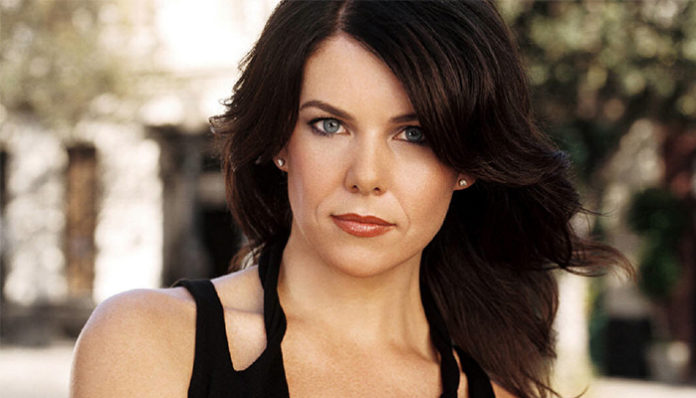 American actress Lauren Graham is best known for her portrayal of Lorelai Gilmore in the comedy drama, Gilmore Girls. As a young girl, she was an avid equestrian and spent most of her time riding competitivelyーit wasn’t until she was in her late teens that she switched her focus to acting. After attending New York University and Barnard College, she went to the Southern Methodist Universityーit is there that she earned a Master’s of Fine Arts Degree in Acting in 1992. Later relocating to Los Angeles, she appeared in a handful of commercials including those for Lean Cuisine and Dimetapp. In 1995, Graham made her television debut in the sitcom, Caroline in the City. Continuing to chase her dreams of becoming an actress, she made a guest appearance in 3rd Rock from the Sun (1996) prior to landing main roles in the comedies Good Company (1996), and Townies (1996) later that same year. From there, Graham eventually made her feature film debut in the horror thriller, Nightwatch (1997) alongside Ewan McGregor, Josh Brolin and Patricia Arquette.

Before the end of the 90’s, the actress continued to involve herself in a handful of television series including Law & Order (1997), NewsRadio (1997), and Conrad Bloom (1998). On the big screen, she also appeared in Confessions of a Sexist Pig (1998), One True Thing (1998), and Dill Scallion (1999). After many years of playing small roles, her luck finally began to change with the arrival of the new millenniumーin 2000, Graham received a big break when she was cast as one of the main leads in The WB’s comedy drama, Gilmore Girls. Hugely popular amongst viewers, the series was monumental in the launching of her professional career. For her take on Lorelai Gilmore, the character which she portrayed on the show, the artist received countless accolades including two OFTA Television Awards, two Teen Choice Awards, a Gold Derby TV Award, as well as a Golden Globe Award nomination.

So what has the Hawaii-born actress been up to these past few years? Is she still acting full-time? If so, what are some of her latest projects? What happened to Lauren Graham? Where is she now in 2018? 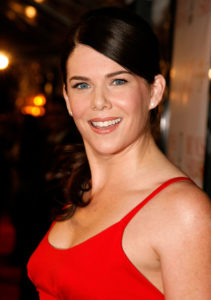 Born on March 16, 1967, in Honolulu, Hawaii, Lauren Helen Graham is the daughter of Donna Grant and Lawrence Graham, the latter of whom was a former president of the National Confectioners Association; she is of Scottish, English and Irish descent. Raised by her father in northern Virginiaーas her parents divorced when she was five years oldーshe loved horseback riding.

An avid equestrian, Graham competed at several competitions during her early life. Following her father’s second marriage, she gained a half-brother and a half-sister; from her mother’s second marriage, she also has a half-sister named Shade. After many years of riding, her interests began shifting towards acting during high school. A student at Langley High School, Graham was a member of the school’s dream team; she later graduated in 1984.

Following her high school graduation, she went to New York University briefly before going to Barnard Collegeーfrom which she attained a Bachelor’s of Arts Degree. Continuing with her education, she eventually attained a Master’s of Fine Arts degree in acting from Dallas’ Southern Methodist University in 1993. From there, she moved back to New York City; although she aspired to become an actress, she supported herself by working as a tutor and a waitress. Later deciding to chase her dreams, she relocated to Hollywood, California in 1995 at the age of twenty eight.

After attending several auditions, Graham landed a few commercial gigs including ones for Lean Cuisine and Dimetapp. Before long, she made her television debut in the sitcom, Caroline in the City (1995) where she was cast as a recurring character for five episodes. A brief guest appearance on 3rd Rock from the Sun (1996) later, the aspiring actress landed a main role in the comedy, Good Company (1996). Unfortunately, it was short-lived and ended after only six episodes. Just a few months afterwards, Graham secured another lead part in yet another sitcom called, Townies (1996). Alas, it was faced with a similar fate and was cancelled after ten episodes.

Over the next couple of years, she continued to move forwards with her career, appearing in a number of series such as Law & Order (1997), Seinfeld (1997), NewsRadio (1997), and Conrad Bloom (1998)ーthe last of which saw Graham in a main role. With the arrival of the new millennium the following year, the actress received a long awaited breakthroughーshe found herself playing one of the principal characters in The WB’s comedy drama, Gilmore Girls (2000). 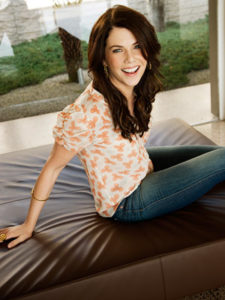 The big break that she had been anticipating, Gilmore Girls offered Graham the perfect opportunity to showcase the skills which she’s been honing the previous years. The brainchild of Amy Sherman Palladino, it starred the actress as Lorelai Gilmoreーa single mother who lives with her teenage daughter (played by Alexis Bledel) in a fictitious Connecticut town called Stars Hollows; throughout the course of the series, audience members get to learn more about the two protagonists as they go with their every day life.

Premiered on October 5, 2000, Gilmore Girls was released to widespread acclaim. Noted for its pop-culture references and fast-paced dialogue, it quickly attracted a massive viewer base. Hailed as one of the “All Time Best TV Shows” by TV Magazine, its cast list also included Melissa McCarthy, Kelly Bishop, Edward Herrmann, Scott Patterson and Keiko Agena.

Met with overwhelmingly positive reviews, it soon became one of the most talked-about shows on television. As with most critically acclaimed television series, it also catapulted its starsーGraham and Alexis Biedel, into celebrity status. Despite its immense popularity, Gilmore Girls later came to an end after seven years in May 2007. According to the network, it was mostly a monetary issue as they were unable to negotiate salaries for the main cast members; with that, The CW announced that the drama would not be returning for an eighth season. However by then, the series had already done wonders for Grahamーwho was now one of the most recognized actresses on television. For her stunning portrayal of the single mother, she was given numerous awards including two OFTA Television Awards, two Teen Choice Awards, a Family Television Award, and a Gold Derby TV Award. 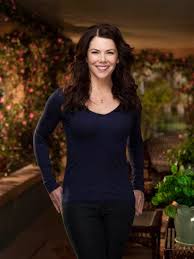 Prior to the end of the 2000’s, Graham also made a couple of TV guest appearances in Family Guy (2002), and Studio 60 on the Sunset Trip (2006). Three years after her time on Gilmore Girls, she received another big break with a NBC drama series called, Parenthood (2010).

Her second major role on television (and probably her second most-remembered), the show focused on of three-generation Braverman familyーwhich consisted of Zeek and Camille Braverman, their four children and their grandchildren. While actors Craig T. Nelson and Bonnie Bedelia took on the roles of the patriarch and matriarch respectively, Graham played the part of Sarah Bravermanーtheir 38-year-old daughter who moves back to live with them after running into financial difficulties; it is later revealed that her ex-husband is both an alcoholic and drug user, and a poor father figure to her two children.

Originally released on NBC on March 2, 2010, the first season of Parenthood was mostly praised by critics and viewers alike. Described as a coming-of-age drama for audiences of all ages, its cast and scriptwriting in particular was inundated with fabulous reviews. A fan favourite, it had a steady viewership of at least six million throughout its six season runーat the peak of its popularity during the fourth season, it attracted over seven million viewers. In addition to having further established Graham’s place in the industry, the Golden Globe Award-nominated drama also earned Graham a Prism Award nomination and a Teen Choice Award nomination. After over a hundred episodes, Parenthood aired its series finale on January 29, 2015.

On film, Graham co-starred in Boaz Yakin’s adventure drama film, Max in 2015. Featuring a screenplay by Boaz Yakin and Sheldon Lettich, it revolved around a Malinois dog named Maxーwho after experiencing a tragedy while serving in Afghanistan with his handler, returns to the United States to be adopted by his family. While Josh Wiggins took on the role of his human companion, Justin Wincott, the actress played the part of Pamella WincottーKyle’s mother. Boasting an all-star cast list, Max also featured Dejon LaQuake, Thomas Haden Church, Robbie Amell, Luke Kleintank and Jay Hernandez, amongst several other actors. Upon making its way to the theatres on June 26, 2015, it ranked in at number four and earned over $12 million at the box officeーa little over its projected opening figure of $10 million. Despite its good intentions, the film received mainly mixed reviews; while some enjoyed the story of the heroic dog, others panned it for being stereotyped and too predictable. Nonetheless, it was a commercial success; by the end of its theatrical run, it had earned over $44 million worldwideーover double that of its production budget of $20 million.

Since then, Graham has gone on to appear in two comedy filmsーJoshy (2016), and Middle School: The Worst Years of MY Life (2016). In terms of television, she made several appearances in Web Therapy (2014), The Odd Couple (2015), and Repeat After Me (2015). In 2012, the actress also served as a guest judge on the Lifetime reality series, Project Runaway. 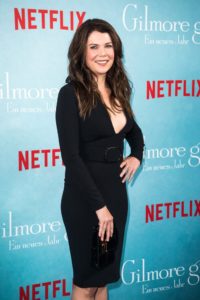 2017 has only just begun, so let’s talk about what the superstar has been up to this past yearーprobably one of her most high-profile projects of 2016 was the highly anticipated mini-series Gilmore Girls: a Year in the Life. A follow up to the original series which premiered over a decade ago, the sequel was released via Netflix on November 25, 2016. Consisting of four episodes, it saw the return of many of the original actors including Alexis Bledel, Kelly Bishop and Scott Patterson. An extreme source of nostalgia for long-time fans of the comedy drama, it currently holds an 8.1/10 rating on IMDb.

While many are excited to watch the series online, Graham has stated in a recent interview that she doesn’t plan on the show herselfーthat she’s not the type of actor to “learn a lot by watching themselves”. In fact, she hasn’t even watched the original Gilmore Girls series!