Moe’s vs Chipotle vs Qdoba: Battle of the Burrito

Have you ever wondered to yourself, “which Mexican-American restaurant is truly the best?” Within the scope of this guide, I aim to introduce you to the three biggest Mexican fast food (truly, a tier above fast food as the three restaurants rival more traditional fast food joints, such as Taco Bell, with their speed and accuracy) and lay out the facts of each. Each restaurant will be analyzed over three categories; their menu,the number of locations (and whether the corporation is expanding or shrinking) and their online ordering, and a special X-Factor category. Read on more to find out.

Moe’s: Moe’s, by far, has the most offerings of the three burrito chains being compared. Moe’s menu ranges from the typical taco, burrito and burrito bowl affair to move specialized quesadillas and even their renowned “stacks,” which is a copy of the Taco Bell Crunchwrap Supreme item. However, Moe’s fresh ingredients and variety of toppings (including diced and pickled jalapenos, grilled mushrooms and fresh-made queso) make the menu far more memorable and flexible for those patrons who are looking for something beyond the simple burrito bowl or taco. Moe’s locations are also being outfitted with the Coca-Cola Freestyle machine, a machine that offers a huge combination of Coke products and flavorings, across the nation, which means that you can go to Moe’s 7 days a week and have an entirely different meal each time.

Chipotle: Chipotle’s menu is very safe and does not deviate very much – why fix what isn’t broken? Chipotle only offers a handful of items, which include (hard and soft) tacos, a burrito, and a salad. I have heard that Chipotle employees would be happy to make you a quesadilla upon request, but I have never ordered one myself and am curious how they would seal the quesadilla; for this reason, I leave a big question mark next to the potential of a quesadilla item. However, Chipotle prepares all their ingredients right in full view of the customers, so while their menu is very safe, their food is always nicely seasoned/spiced and tastes great. 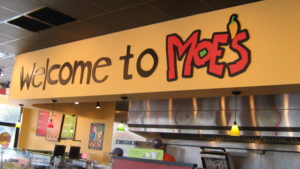 Qdoba: Qdoba is in a happy place; their menu is not quite as extensive as Moe’s, but they have far more offerings than Chipotle does. Qdoba offers the typical burrito, taco, and burrito bowl affair, but on top of these, they also offer a queso burrito (a burrito covered in a delicious, creamy queso sauce) which Moe’s just recently added to their menu. Qdoba also offers taco salads, chicken and vegetarian tortilla soup, and nachos. Qdoba also offers more seasonal items, which includes their recent Habanero BBQ Brisket entrees which can be enjoyed in a taco, burrito, salad, or a burrito bowl. Qdoba has far more to offer in the way of sides, and their selection of additional items may rival or be bigger than Moe’s; they offer staples like pico de gallo, various sauces (such as Mexican caesar dressing and salsa verde), and many more fruits and vegetables that are diced, minced, or offer more of a ‘crunch.’

Moe’s: Moe’s Southwestern Grill only has 600 locations across the country, and some are rather sporadic in their placement; however, Moe’s can typically be found around college campuses or more suburban areas. Moe’s is actually one of the biggest growing burrito chains in the country, so expect more and more Moe’s to pop up, hopefully within your neighborhood.

Moe’s does offer online ordering both through an application and the website (the website is very reminiscent of the Pita Pit online ordering menu), which is nice; however, the biggest flaw is that the items ordered MUST be charged to a card, and any special offers available in the mobile application must be redeemed through the app. Moe’s also offers a loyalty program on their mobile app.

Qdoba: Qdoba has a slight edge over Moe’s Southwestern Grill with around 650 different restaurants, which are also randomly placed; within my local 50 mile radius, there are only 4 Qdobas compared to 5 Moe’s restaurants and more than 15 different Chipotle.

Qdoba has a mobile app and allows for their customers to order through the website with a very nice, clean interface; it is probably exactly what you expect when ordering a burrito through the internet. Qdoba does offer a loyalty program which allows for customers to redeem items such as free sides, free drinks, and with enough points saved, even free meals. Qdoba beats out Moe’s, but does not have the edge over Chipotle’s mobile ordering.

Chipotle: Chipotle is by far the widest chain, thanks to being a sister company of McDonald’s, and can be found all over the United States. As of the start of 2017, Chipotle is operating more than 2,000 locations country-wide and are planning to add more by the end of the year and continue their pattern of growth.

Chipotle has the most accessible online ordering, which is placed through their website – they do have a mobile app as well, but the website is very straightforward and user-friendly. The user can create an account and login, where their past meals and credit card information can be stored in order to make re-ordering a breeze. The user adds a name to their meal, which is written either on the bag or the foil covering the item, so sorting out any multiple-meal orders is easy. Chipotle wins this category by far.

Moe’s: Moe’s biggest X-factor lies within two major categories to consider; the free chips and salsa included with every meal, and the offering of Moe’s Mondays. Moe’s offers 4 different salsas, including a peculiar-tasting green salsa, along with free chips and salsa. The chips are typically loaded on top of your food if you get everything to-go, otherwise the employees will pile on chips on the side of your basket. I’ve also found that free chip refills are also a thing – never once have I been hassled as I go back up to the counter and ask for some more chips with salsa. Moe’s Mondays is also a deal that cannot be passed up; you receive a burrito, chips, salsa, and a medium-sized beverage for the price of $6.99 every Monday, all Monday long. The chips and salsa that are included for free with every meal, along with the awesome salsa bar, are what make Moe’s a burrito force to be reckoned with.

Qdoba: Although I’ve only had Qdoba a few times, I remember that everything was incredibly well-seasoned and had a pleasant crunch to it. Out of the three burrito chains, Qdoba may offer the best-tasting food. With its wide variety of additional items, Qdoba definitely allows for the patron to customize their food as much as they like. In addition to great-tasting food, Qdoba also offers a more limited breakfast selection that is served all day in the restaurants around me. Qdoba is also open for longer hours than both Moe’s and Chipotle, with my local stores opening at 10:00 AM every day of the week; an hour earlier than the two other stores.

Chipotle: Chipotle’s biggest X-factor contributor is the wide variety of drinks it offers. Chipotle does offer margaritas and other beers, like Moe’s does, but the variety of drinks that they have are a little too limited in order to compensate for the other two burrito chains. Chipotle may also be the fastest to receive your food, but I’ve found that Chipotle is ALWAYS packed with people and has an extensive line. Still, it is nice to receive a refreshing margarita made right in front of you during a quick lunch break. One thing to note is that Chipotle offers the most reasonable catering prices (around $8 a person with a buffet-style deal), although catering is nothing to consider for your average patron.

However, it is worth bringing up that Chipotle has had some stunted sales growth due to E. Coli scares over the past few years and the introduction of the Chiptopia program, which offered people free burritos for eating there once weekly for 3 straight months – definitely a hard task on any stomach. This is also a negative X-Factor; Chipotle is a large chain and the nature of Mexican food requires precise preparation of food, so if they cannot have a tighter grip on the food production process, we could be seeing the return of many free burritos to rebuild customer loyalty. Not that I’m complaining about a free burrito, though.

Which Burrito Chain is Best?

Since taste is subjective, I cannot be the one to tell you where you definitely get your burrito fix from now on. However, I have been a long-time patron of Moe’s and while I understand the hype behind Chipotle, I have found myself to be more of a fan of Moe’s wider menu selection. The Coca-Cola freestyle machine also is a huge mark in the pro column of Moe’s since I can get my delicious Vanilla Coke there, which cannot be found at either Qdoba or Chipotle. Although Moe’s are few and far between, they offer a more memorable experience than Chipotle. Chipotle seems to be a very safe staple and does not deviate far from their menu, which I think is a negative thing since Mexican food is all about spice and mixing things up.

Qdoba, in my opinion, is also better than Chipotle due to the wider selection of food and the huge amount of additional items you can toss into your food. Although Qdoba seems to be concentrated in areas and non-existent in others, they are always a welcome site to see when looking for a place to stop and grab a quick lunch burrito. I have only had Qdoba a few times, but every time I have consistently ranked it as better than Chipotle but not quite as memorable as Moe’s.

Chipotle, to me, is just a very safe place to grab some food that you’ve already had before. Although their food is not bad and the preparation time is quick (in addition to the ability to swing in and pick your food up right at the register with online ordering), once you’ve had a meal at Chipotle, you know exactly what to expect upon any return visits. To me, that’s not what I want from a burrito chain, although I have heard rumors that Chipotle is looking to mix things up with some new menu additions such as desserts and a bigger variety of menu items.