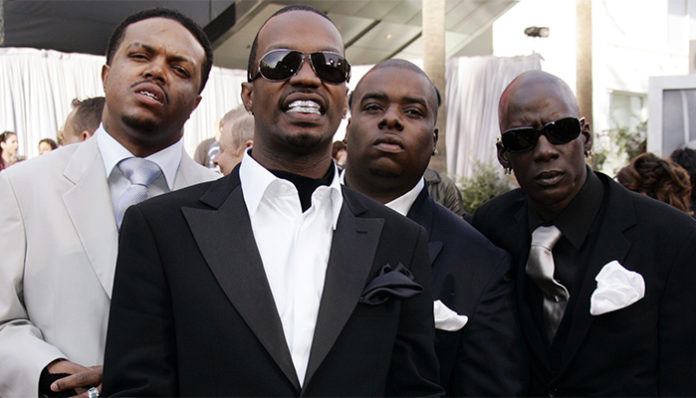 Based in Memphis, Tennessee, the American hip hop group Three 6 Mafia first made themselves known with their debut album, Mystic Stylez (1995). Founded by Juicy J, Lord Infamous and DJ Paul back in 1991, they started their music career as Backyard Posse prior to settling on their current name. Three years after they were established, Koopsta Knicca joined group in 1994; Crunchy Black was later recruited as a dancer in 1995. Since then, their lineup has changed multiple times; as of 2017, only DJ Paul and Crunchy Black remain in the band. Through their own record company, Prophet Entertainment, they eventually started to record and release a number of extended-plays during their initial years together. Four years after the band got together, Three 6 Mafia released their debut studio album entitled, Mystic Stylez (1995). Although it wasn’t an instant smash hit, it did manage to reach the US Top R&B Albums Chart. Following their initial endeavour, they came out with their second full length album, Chapter 1: The End in 1996, which proved to be more successful than their first.

Continuing with their emerging career, Three 6 Mafia released their third album, Chapter 2: World Domination in 1997. Their most successful album at the time, it later went Gold in the United Statesーmaking it their first record to receive RIAA certification. From there, it wasn’t until 2000 that their fourth studio album, When the Smoke Clears: Sixty 6, Sixty 1 arrived in the stores. Since then, the hip hop group has gone on to release an additional six albums including Choices: The Album (2001), Da Unbreakables (2003), Choices II: The Setup (2005), Most Known Unknown (2005), Last 2 Walk (2008), and Watch What U Wish (2015). Aside from that, they’ve also released over forty music videos and countless singles. Like most musicians, the group has also collaborated with a number of other artists over the years such as Lil’ Jon, Play-n-Skillz, Killer Mike, Chingy, Justin Timberlake, Lil’ Scrappy, and Ali & Gipp, to name a few.

One of the most popular hip hop groups of their time, they’ve won several awards throughout their years together. In 2006, Three 6 Mafia was awarded an Oscar for “Best Achievement in Music Written for Motion Pictures” for their hit single, It’s Hard Out Here for a Pump, which was used as the theme song for the indie film, Hustle & Flow (2005). The winner of an American Music Award (e.g. Favourite Rap/Hip-Hop Band), they’ve also been nominated for three BET Awards (e.g. Best Group), a Billboard Music Award (e.g. R&B/Hip Hop Group of the Year), an MTV Video Music Award (e.g. Best Hip-Hop Video), two Dirty Awards, and two Source Awards.

So what has the Academy Award-winning band been up to recently? Are they still coming out with new albums and singles in the late 2010’s? What happened to Three 6 Mafia? Where are they now in 2018?

The Formation of Three 6 Mafia in the Early 90’s

In 1991, a few aspiring musicians, Paul Beauregard “DJ Paul”, Ricky Dunigan “Lord Infamous” and Jordan Houston “Juicy J” came together to form a dark hip-hop group known as Backyard Posse. Throughout their initial years together, they recorded a number of original beats under their independent recording company, Prophet Entertainment.

Three years later, their lineup grew with the addition of Robert Philips “Koopsta Knicca”; the group eventually increased in members once again after Darnell Carlton “Crunchy Black” joined as a dancer in 1995. Changing their name to what it is today, Three 6 Mafia, they scored a contract with a major label and subsequently released an admirable EP entitled, Live by Yo Rep in November of that year. Not long afterward, they released their first full-length album, Mystic Stylez on May 25, 1995. 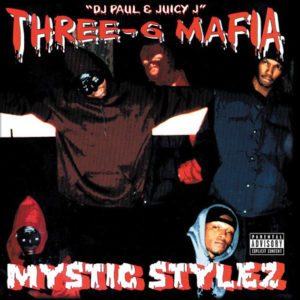 Produced by two of their members, Juicy J and DJ Paul, Mystic Stylez was recorded at a studio in Memphis, Tennessee. According to the former, the group often listened to the songs of Geto Boys, KRS-One and N.W.A. while working on their music. A horror-themed hip hop album, the soundscape has been described by many to be “foreboding”.

Regarded as “a defining example of horror core”, it received mostly positive reviews from fans of the genre and contemporary critics. Given a three and a half star rating, the album was later included in Complex Magazine’s list of “90 Best Rap Albums of the ’90’s”. While Mystic Stylez didn’t end up spawning any singles, it did eventually manage to reach number fifty-nine on the US Top R&B Albums Chart.

On December 3, 1996, the hip hop group dropped their second full-length album, Chapter 1: The End. A follow up to their debut effort, its production was once again handled by members Juicy J and DJ Paul. Their second release under the Prophet Label, it contained a collection of seventeen tracks including Where da Killaz Hang, Life or Death, Walk Up 2 Yo House, Money Flow, Last Man Standing, Body Parts, and Destruction Terror. Amongst the tracks were also a handful of collaborations with artists Project Pat, Killa Klan Kaze, K-Rock Gangsta Blac, and M-Child. Considerably more successful, many critics noted an improvement in sound quality compared to that of their debut album; the refinement in song structure was also target of much praise. Chapter 1: The End later peaked at number 126 on the Billboard 200 and at number forty two on the Top R&B and Hip Hop Albums Chart. 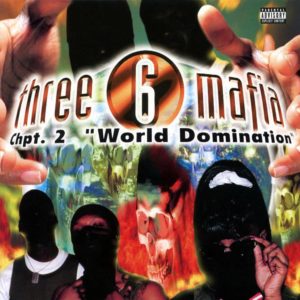 The following year, Three 6 Mafia came out with their third studio album entitled, Chapter 2: World Domination. Their first release under the Relativity label, it became their first widely distributed album in the United States. Although it still featured a number of darker beats, the group’s effort in moving toward a more mainstream sound was evident from its tracks. 7

1 minutes in length, it came with twenty two titles, some of which included Weed Is Got Me High, N 2 Deep, Tear Da Club Up ’97, Spill My Blood, I Ain’t Cha Friend, Watcha Do, and Flashes. Much like their previous efforts, it also featured guest appearances from Propject Pat, Dayton Family, and Prophet Posse. Seeing another improvement on the charts, Chapter 2: World Domination peaked at number forty on the Billboard 200 and at number eighteen on the Top R&B Albums Chart. Supported by three singles, it has since sold over 800,000 copies domestically, making it Three 6 Mafia’s first RIAA certified release.

With the arrival of the new millennium, so did their successーon June 13, 2000, they released their fourth studio album entitled, When the Smoke Clears: Sixty 6, Sixty 1. Their first album to go Platinum, it also marked their first release with the Loud Label. Recorded between 1999 and 2000, it is noted for stepping away from the dark beats that encompassed their earlier releases. Amongst its twenty two-song track list were Act Like You Know Me (Point’ Em Out), Who Run It, Put Ya Signs, Where Da Cheese At, Tongue Ring, Take a Bump, and I’m So Hi.

A number of artists also made guest appearances in the album including UGK, Project Pat, La Chat, Indo G, Big Gripp, Hypnotize Camp Posse, Insane Clown Posse, and several others. Their most successful album yet, it peaked at number six on the Billboard 200 and at number two on the Top R&B and Hip Hop Albums Chart. Spawning four singles, Who Run It?, Sipping’ on Some Syrup, Tongue Ring, and Weak Azz Bitch, When the Smoke Clears: Sixty 6, Sixty 1 went on to earn a three star rating from critics at Allmusic. To date, over 1,000,000 copies have been sold in the United States. 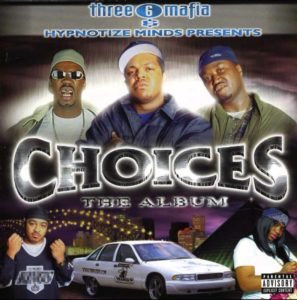 A year later, Three 6 Mafia released their fifth studio album, Choices: The Album. The soundtrack for the Choices: The Movie, a direct-to-video film, it was preceded by the lead single, Baby Mama which was released on September 9, 2001. In contrast to the group’s earlier albums, the album did not feature any guest artists; instead, all of its twenty one tracks featured the members themselves.

Some of the more memorable titles from the album include How It Went Down, Ridin’ n Chrome, Wona Get Some I Got Some, U Got Da Game Wrong, Pass Me, The Restaurant Scene, 2-Way Freak, and Talking. Shortly after being made available in stores, it peaked at number nineteen on the Billboard 200 and number four on the Top R&B and Hip Hop Albums Chart.

From there, it wasn’t until 2005 that Three 6 Mafia released another chart topper with their eighth full length album entitled, Most Known Unknown. Responsible for some of their biggest hits such as Poppin’ MY Collar, Stay Fly, and Side 2 Side, it entered the US Billboard Top 200 at number three and the R&B and Hip Hop Chart at number oneーmaking it their best debut to date on the charts; by the end of the first week, it had sold over 125,000 copies in the US. Their second release with Sony BMG, it came with a total of seventeen tracks (with four bonus tracks at the end); most if not all of which featured appearances from artists such as Remy Ma, Paul Wall, Frayser Boy, Young Buck, Slim Thung, Trick Daddy, among various others.

A comeback album, it garnered positive praises from both fans and critics alike; for instance, Robert Christgau awarded Most Known Unknown a score of B-. Shortly after its release, it also reached number one on the US Top Rap Albums Chartーmaking it their first record to achieve such a feat. Later spawning three singles, Side 2 Side, Poppin’ My Collar, and Stay Flyーthe last of which eventually went two times Platinum, the album has since sold more than a million copies. On June 26, 2006, a little less than a year after its initial release, it was certified Platinum by the RIAA.

Looking at their discography, one would notice that their last album release was that of Watch What U Wish… back in 2015ーwhere is the hip hop group now? The fact is, many things have happened to Three 6 Mafia the past couple of years, some more upsetting than others. On October 9, 2015, Koopsta Knicca unexpectedly died from a brain aneurysm, making him the second member of Three 6 Mafia to pass away (the first being Lord Infamous, a founding member who passed away in 2013 from a heart attack). In more uplifting news however, it was announced that Juicy J will be rejoining the group in June of last year.

If you’d like to stay up-to-date and connected with the American hip hop group, you can do so by following them on Twitter at @Damafia6ix. Alternatively, you can also visit them on their official Facebook page at @three6mafia, although it doesn’t look like they’ve been too all too active as of late.