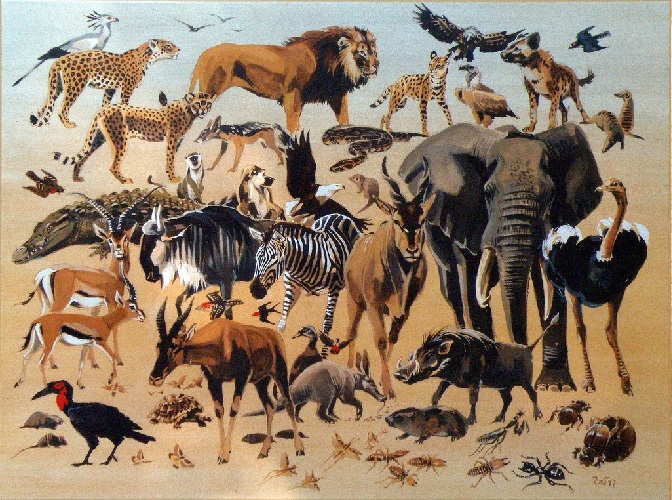 Ever since life emerged from the primordial soup four and a half billion years ago it has evolved to survive and adapted to thrive. Over more revolutions of the sun than any human being could ever really comprehend, life evolved from the simplest single-celled lifeforms into the vast array of species that populate planet Earth today. 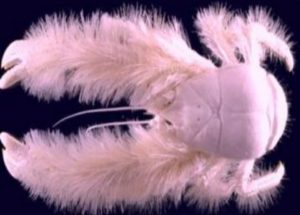 Like many other animal lovers, if it’s fluffy then I want to pet it, and if it has pincers I tend to avoid it, so the yeti crab causes all sorts of confusion for people like me. The yeti crab, or Kiwa Hirsuta was discovered in 2005 in the South Pacific Ocean and has fine bristles called setae that resemble fur covering it’s legs and claws. The creature, which is also known as the yeti lobster lives at a depth of 7,000 feet and survives in the freezing water by settling on top of hydrothermal vents. It is believed that it feeds by using the setae on it’s appendages to detoxify poisonous minerals that are released from the hydrothermal vents through the process of chemosynthesis, although it is also believed to be carnivorous. On reflection this is one fluffy creature I will probably not be petting any time soon. 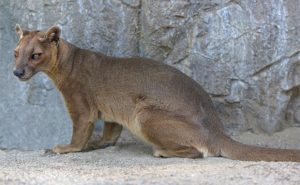 The fossa is a strange looking creature that has some of the characteristics of a cat, strongly resembling a puma, but also a long tail similar to a monkeys and small round ears like a weasel. The fossa, or Cryptoprocta Ferox is a mammal that is only found in the forests of Madagascar where it is commonly feared by the natives due to its fearsome reputation as a hunter. Although only reaching a maximum of 31 inches in length and with a bodyweight of no more than 22 pounds, the fossa has semi retractable claws that give it the ability to climb up and down trees head first and flexible ankles that allow it to leap from tree to tree. The fossa is a naturally superb hunter and stalks its prey both by day and night. It lives primarily on a diet of lemurs, rodents and lizards, although any small creature that comes within it’s range is a potential target. They can travel up to 16 miles in a single day and kill using their razor sharp teeth. Unfortunately due to the gradual destruction of the natural habitat of the fossa they are now considered a vulnerable species. 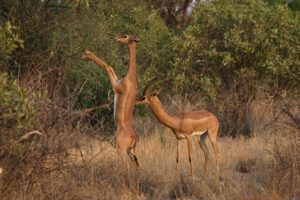 If I told you there was an animal native to Africa with a long thin neck and slender legs you would probably think of the giraffe, but the gerenuk, which is also known as the giraffe gazelle shares those characteristics with its better known neighbor. The generuk is a long-necked antelope that lives in the Horn of Africa and the African great lakes region and it was first discovered by European naturalists in 1878. Although the largest gerenuks are only 41 inches tall they share the feeding habits of giraffes by stretching out their long necks to feed on the foliage of acacia trees, and their added reach gives them an advantage over other gazelles and antelopes as they can reach almost 2 metres in the air by standing on their hind legs. The gerenuk lives for up to 8 years in the wild but can survive for longer in captivity without the threat of predators such as hyenas and big cats that it faces in its natural habitat. 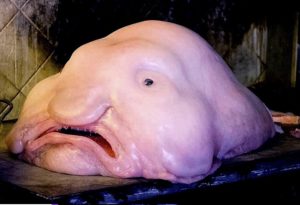 The blobfish, or Psychrolutes Marcidus, would perhaps have never come to the attention of humans if it wasn’t for the practice of deep-ocean trawling. The blobfish lives deep within the coastal waters surrounding Australia, Tasmania and New Zealand and usually lives between 600 to 1200 metres below the surface. Because of the immense pressure at such depths the blobfish is comprised mainly of a gelatinous mass that has a density slightly less than water, which allows it to float along the floor of the ocean, eating edible matter as it goes without expending too much energy to propel itself forward. Unfortunately the fishing industry, and the widespread use of bottom trawling nets has seen the blobfish became a frequent accidental catch for fishing trawlers and it’s feared that the blobfish could become an endangered species eventually because of this. The appearance of it’s rubbery body when free from the pressures of the deep ocean is somewhat bizarre, which led to the blobfish being named the Worlds Ugliest Animal in 2013, and also adopted as the mascot of the Ugly Animal Preservation Society. 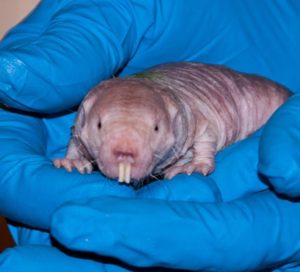 The blobfish may have been named the Worlds Ugliest Animal but the Ugly Animal Preservation Society must surely have considered the naked mole rat for the title when considering their decision. Also known as the sand puppy and desert mole rat this poor little guy is definitely not a good-looking creature, but he does have the compensation of being able to survive in a variety of harsh underground habitats. The naked mole rat not only has extremely low metabolic and respiratory rates, but the creature is also incapable of feeling pain in its skin. As an added bonus the mole rat is known for its long life span and is capable of surviving for over 30 years, which is far longer than any other rodent, and it also has a strong natural resistance to cancer. They live underground in colonies that range in size between 20 and 300 rats but don’t worry about coming into contact with one, unless you live in East Africa the naked mole rat is unlikely to be anywhere near you. 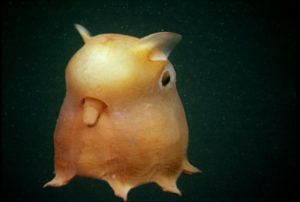 Dumbo octopus is the name given to not just one species but an entire genus of umbrella octopuses. This family live deep within the ocean at depths of up to 13,000 feet and possibly even deeper. The genus comprises at least 15 different species and they are all notable for their fins that resemble the ears of Walt Disney’s Dumbo. At such great depths the temperature is extremely cold and no natural sunlight is present so the Dumbo octopus family survive by foraging along the deep ocean floor. They move forward by flapping their ear-like fins and looking for small invertebrates which are their primary diet. Due to the hostile environment they live in their only natural predators are marine mammals such as tunas, dolphins and sharks, although due to their preference for extreme depths they are rarely captured by fishing trawlers. 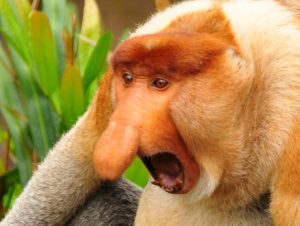 The proboscis monkey can only be found on the south-east Asian island of Borneo where it is known by many names, among them the long-nosed monkey, the Dutch Monkey, or the Orang Belanda, which translates as ‘Dutchman’. The reason for the last name is due to the Indonesians comparing the large prominent nose on the monkey to the noses of early Dutch colonists. The proboscis monkey is one of the largest monkeys native to Asia and can reach a length of 30 inches and a bodyweight in excess of 50 pounds. Their diet is varied, with up to fifty different plant species being considered edible by them, but they also will eat a number of fruits seeds and insects. The probiscus monkey is one of the most naturally proficient swimmers amongst all monkey families and is capable of swimming across rivers as well as swimming underwater for up to 70 feet. Due to the advancement of human civilization their natural habitat has reduced in recent years and the species is now considered to be endangered. 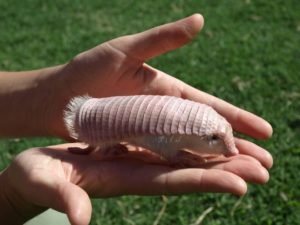 An animal that’s small pink and fluffy would usually be a hit with those celebrities that love to carry a tiny dog in their bag, but unfortunately for them the pink fairy armadillo isn’t an animal that is likely to make a good pet. This little-known species of anteater is usually no bigger than four inches long and weighs only a few ounces, making it the smallest armadillo of all. Virtually all attempts to keep them in captivity have resulted in the death of the animal within a few days and as a result very little about their natural habits are known. This is believed to be caused by the creatures extreme sensitivity to changes in environmental conditions and adverse reaction to stress. The pink fairy armadillo lives in the desert regions of central Argentina and survives on a diet of ants and larvae that it seeks out underground during its nocturnal hunting routine, however in the few cases of a specimen surviving in captivity they have been found to accept foods such as watermelon and avocados.

#2 – The Superb Bird of Paradise 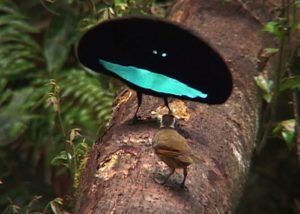 If you’ve ever tried to show off your moves on the dance floor to attract a potential partner without success, then rest assured that things could be a lot worse. The male superb bird-of-paradise outnumbers the females of its species by such a large ratio that competition amongst males for a mate is particularly fierce. Males have developed a strange and elaborate courtship dance ritual that involves carefully preparing a dance floor by scrubbing it clean with leaves before calling a female over to show her his impressive black cape that springs up from around his neck to display a neon blue smiley face type effect. The male then dances around his potential mate in order to attract her, but he has his work cut out, females typically reject at least 15 potential mates before finally consenting to a partner. The superb bird of paradise lives in the forests of New Guinea and has suffered at the hands of hunters due to the brilliance of its plumage, but it remains the most common bird of paradise in the region. 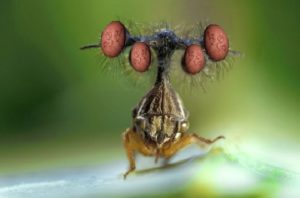 Bocydium Globulare, or the Brazilian treehopper as it’s more commonly known is quite possibly one of the strangest looking creatures that has ever existed. The head of this insect is adorned with four round antenna-like appendages that have a superficial resemblance to the rotors of a helicopter. Also known as the ‘Bell Bearer’ the purpose of the strange headgear is somewhat of a mystery but it’s believed that it may simply be to deter predators by making the creature more difficult to eat, while other Biologists have theorised that the tiny bristles on the headgear are sensitive to vibration and may warn the treehopper of approaching predators. The Brazilian treehopper leads a quiet life in the forests of South America, and spends most of its time high up in the treetops, munching on the underside of Glory Bush leaves.