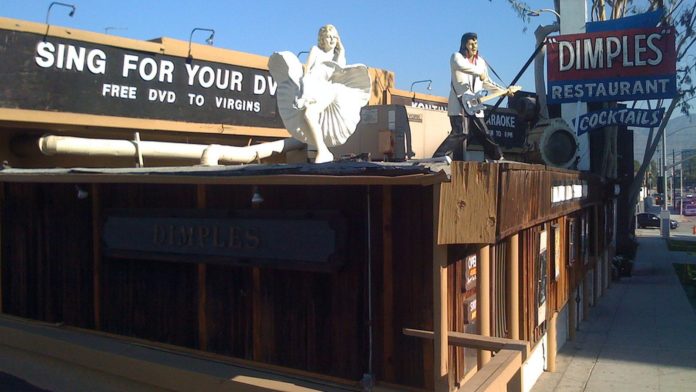 Dimples was opened in 1982 in Burbank, California, by Sal Ferraro after working in the bar business for two decades. It was the country’s first karaoke bar and it attracted both locals and celebrities thanks to its close proximity to Hollywood. Ferraro raked in around $85 grand a month as Dimples prospered.

However as his bar’s reputation grew it began to look like a warehouse thanks to Ferraro’s habit of hoarding memorabilia. Movie props, old cameras, projectors, and a large number of other Hollywood items took up a lot of bar space meant for patrons, and his focus on this hobby made Ferraro neglect other pertinent matters like maintenance. Ferraro also refused to upgrade his obsolete sound system, making the live karaoke experience more of an earsore. To make matters worse Ferraro’s uncomfortable treatment of female customers further repelled clientele.

With Dimples unable to attract the younger crowd and being neck deep in debt, Ferraro decided to call for Jon Taffer and Bar Rescue before it’s too late.

Taffer sends in a group of four people for recon with one of them “celebrating” a birthday. The drinks the group ordered were too sweet, and the medium rare burger took more than 20 minutes to be prepared as the chef apparently forgot to flip it on the fryer, not to mention his cross contamination of the area. Ferraro hosted karaoke with flaccid energy and when he approached the group he made obscene remarks to the ladies with microphone in hand for the entire bar to hear. To top off the uncomfortable spectacle Ferraro told one of the girls to drink the shot located between their male companion’s legs. The four left Dimples immediately with no positive memory of the bar to relay to Taffer.

The Bar Rescue host then entered Dimples with his experts namely chef Brian Duffy and bartender Joe Brooke. He conversed with Ferraro and learned that the bar was making half of what it used to make during its heyday. Duffy and Taffer then went to the kitchen to meet with chef Roberto who took offense to the host’s words about his malpractices during the recon that could cause food poisoning. Duffy revealed the staggering amount of bacteria on the kitchen with a device and Taffer ordered Roberto to clean up the place.

In the following staff meeting Taffer told about his plans of relocating Ferraro’s collection and cooking up a new gimmick for birthday celebrants to remove the obscenities, although the bar owner did not wholeheartedly agree to these changes. Afterwards Taffer brought in his experts plus a new one in the form of karaoke expert Fred Medrano to help shape up the staff for tonight’s stress test.

Duffy taught Roberto his trick called the “international grilling time” which helps keep tabs on burger patties to prevent overcooking. Brooke tested the mixing speed of the bartenders and blew an air horn whenever they made a mistake to simulate pressure. Medrano inspected the ancient sound system of Dimples and takes note of the lack of reverberation because of the bar’s severely outdated equipment.

During the stress test Elle, the waitress, was praised by Taffer for her commendable customer service. Roberto cracked under pressure and it took a toll on his health as the orders piled up, causing Duffy to call for 911 and take over the kitchen for the remainder of the night. Taffer himself even lent a hand in cooking the dishes as Duffy was quickly overwhelmed.

At the stage the singing patrons were barely audible and constant feedback ensured an auditory nightmare for everyone. Ferraro’s attempt in hosting was lackluster as he lacked the energy to fire up the place. After the test Taffer and his experts told Ferraro that the old ways won’t work anymore and the bar needed to catch up to the modern times. Taffer assured the owner that this can be done without sacrificing the history of Dimples.

The next day Taffer had all the memorabilia taken down despite Ferraro’s earlier instruction to not touch his collection.  The employees were given a preview of the bar’s wider interior which elicited ambivalent reactions. Brooke then introduced a couple of simple cocktails that utilized fresh ingredients for a unique flavor. While Roberto was in recovery Duffy revamped the food menu with Haigo the new line cook, and the dishes they created were tailored for sharing. Medrano trained Elle with the basics of energetic hosting as her energetic nature made her the ideal candidate. Taffer showed the blueprints to Ferraro which involved replacing the bar’s sign, the tabletops, and the sound system, and the remodeling took 60 hours to complete due to the amount of work that had to be done.

Two hours before the relaunch Taffer introduced the renovated Dimples with a cleaner façade and a new, brighter signage. Inside the ceiling was slightly raised and the space formerly occupied by the memorabilia was now fitted with eight additional seats. Some of Ferraro’s collection was displayed in glass shelves while the others were stored away. The DJ booth was given new equipment, and the stage elevated with an additional seven feet and equipped with colorful spotlights to keep the energy levels up. A dressing room was included behind the stage so the hosts and performers can don costumes before stepping into the spotlight. To keep up with the latest in music Taffer installed a wall-mounted TouchTunes Jukebox that automatically updates its library every week. Of course the speakers were also upgraded so Dimples can provide the best karaoke experience to its patrons.

During the grand reopening Ferraro was visited by Dave Golonski, the mayor of Burbank, and presented the owner with a certificate of recognition that honored the legacy of Dimples. Taffer left with hopes that Ferraro will move on from the past and embrace the future.

Dimples Now in 2018 – The After Bar Rescue Update

A month after the rescue Ferraro was reportedly putting back his memorabilia one by one. Some of the reviews on Yelp indicated that the bar returned to its old ways particularly Ferraro’s uncomfortable moves. Brooke mentioned in a Los Angeles Magazine interview that the owner doesn’t even allow patrons to use the TouchTunes Jukebox.

On a positive note customers loved the bar’s gimmick of burning karaoke performances into DVDs to be taken home as a souvenir.

Dimples closed its doors permanently in April 2015 as it was part of the area slated for the Talaria Project, a construction project that will build luxury apartments. The closure was announced in December 2014 during the Bar Rescue follow-up and Ferraro was first given 60 days to pack up until the deadline was pushed to a few more months. Ferraro planned on finding a new place to set up shop but so far there’s no word if he already started a new bar in another city.

Dimples’ Facebook page is still up although it is not very active. Click here to visit it if you’re in the mood for a trip down memory lane.