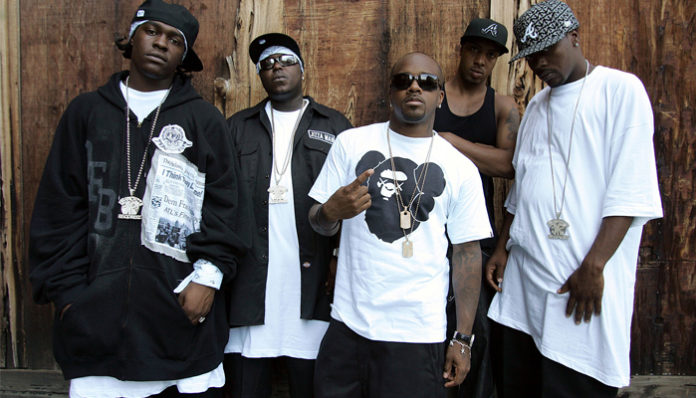 Dem Franchize Boyz, a Southern Rap group based in Atlanta, Georgia, first made themselves known with their eponymous debut album in 2004. The crew consists of four members: Gerald Tiller, Maurice Gleaton, Jamall Willingham, and Bernard Leverette. All former classmates at high school, they came together with their love for music and eventually formed the group in 2002. Noted for their unique blending of South-oriented sounds with funk beats, they gradually made a name for themselves in the local rap scene. Before long, they were performing at various venues across the city. Having gained a loyal fan base after a number of low-key, independent releases, Dem Franchize Boyz eventually began to record their own mix-tapes in 2003. From there, the quartet was soon inundated with various offers from several music labels; after doing a little bit of shopping around, they decided to go with Universal Records. Many hours spent at the studio later, they released their debut single, White Tee in the summer of 2004.

Just a few months after the release of the song, which went on to peak in a few US Charts, Dem Franchize Boyz came out with their self-titled studio album, Dem Franchize Boyz. While it was met with generally favorable reviews, the album was just a few spots shy of peaking within the top 100 in the US Billboard Top 200. Two years later, the foursome released their best selling album to date, On Top of Our Game under Virgin Records. Much more successful than their initial effort, it wasted no time in settling at number five on the Billboard 200. A chart topper on the US Rap Albums Chart, it has since gone Gold after having sold 500,000 copies within the country. From there, Dem Franchize Boyz dropped their third full length album, Our World, Our Way in 2008, following another label change to E1- however it ultimately did not achieve the same level of success as their previous work.

In terms of singles, the Southern Rap crew has come out with a total of six since their formation including White Tee (2004), I Think They Like Me (2005), Lean wit it, Rock wit it (2006), Ridin’ Rims (2006), Talkin’ Out da Side of Ya Neck! (2008), and Turn Heads (2008)– two of which have gone on to receive RIAA accreditation. Like most music groups, they’ve also collaborated with a number of different artists such as Monica, Brooke Valentine, Lloyd, Lil Peanut and Charlay, Jermaine Dupri, Bow Wow, and Da Brat. Throughout their time together, they’ve also amassed a number of accolades including an American Music Award, a BET Hip Hop Award, a Soul Train Award, among a couple others.

So what has the Georgia-based quartet been up to since then? Have they gone their separate ways? What are they doing nowadays? What happened to Dem Franchize Boyz? Where are they now in 2018? 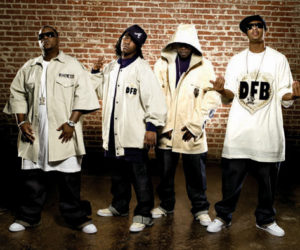 Based in Western Atlanta, Georgia, Dem Franchize Boyz formed in 2002 when a few high school friends came together for their love for hip hop. The group consisted of Bernard Leverette “Jizzal Man”, Jamall Willingham “Pimpin”, Maurice Gleaton “Parlae”, and Gerald Tiller “Buddie”, all of whom were classmates as teens.

Creating their own unique blend of funk backdrops and Southern crunk sounds, they began performing at a number of local venues, striving to create a name for themselves. With their talents and effort, it didn’t take long for them to garner a loyal fan base in their native Atlanta. Continuing to perform and record independent, Dem Franchize Boyz eventually started to record their own mix-tapes in 2003, in hopes of landing a professional recording contract.

Unsurprisingly, the foursome soon found themselves inundated with a number of record deals from various music labels. Following a brief period of shopping around, Dem Franchize Boyz decided to sign with Universal Records later that year. From there, they quickly began frequenting the studio to work on their professional debut. On August 10, 2004, the hip hop group released their debut single, White Tee under Universal Records. Although not an instant smash hit, it proved to be fairly successful among the rap scene. Just a couple of months later, the Atlanta-natives dropped their self-titled debut album entitled, Dem Franchise Boyz on September 14, 2004. 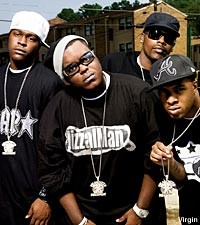 Their debut single, White Tee was written by a team consisting of J. Willingham, G. Tiller, and M.Gleaton. A blend between gangsta rap and hardcore hip hop, the track managed to peak at a handful of charts including the US Billboard Hot 100, Hot R&B and Hip Hop Songs, and Hot Rap Tracks- where they settled at number 79, 25, and 23 respectively. Accompanied by a music video where the group is seen donning white T-shirts, it was generally well received although it did cause some controversy as some schools began associating white T-shirts with gangs.

On September 14, 2004, just two months after the release of their debut single, they came out with their first full length album entitled, Dem Franchize Boyz. Recorded between 2003 and 2004, its production was handled by Parlae, Hard Knard, Pimpin, and P-No The Matrikks Productions. A Crunk, Southern Hip Hop Album, it consisted of twelve titles including Where I’m From, When Can We Date, Dat’s Da Way Dey Roll, Do Ya Dance Girl, Slap Ya Witta Bank, Hit da Dirt, and Oh, I Think They Like Me; the track list also featured guest appearances from fellow artists, Peanut & Meat.

Noted for its straightforward lyrics which revolved around themes of girls, brotherhood and cars, Dem Franchize Boyz was awarded a three star rating from Allmusic; similarly, it was given a score of 3.5/10 from RapReviews. In terms of chart performance, their debut effort peaked at number 106 on the Billboard Top 200 and at number eighteen on the US Top R&B and Hip Hop Albums Chart- rendering it a mild hit.

Two years after the release of their self-titled album, they switched to Jermaine Dupri’s So So Def Recording Label and released their second full length album entitled, On Top of Our Game. Produced by a number of talented individuals including Jim Jonsin, Vaushaun Brooks, Delarmon Harold, Jamall Willingham, and DJ Montay to name a few, the disc was fitted with twelve tracks including Bricks 4 the High, You Know What it Is, Freaking As She Wanna Be, Suckers Come and Try Me, and They Don’t Like That. In addition to the standard edition that was released, a deluxe version was also made available, which came with a bonus DVD.

Shortly after its release, On Top of Our Game entered the Billbaord 200 at number five; within the first week, it had sold 106,000 copies. Significantly more successful than their previous work, it also peaked at number two and at number one. On Top of Our Game also went on to spawn two successful singles- I Think They Like Me and Lean wit It, Rock Wit It, both of which has since received RIAA certification. The album itself, has since also been certified Gold by the RIAA for exceeding 500,000 copies in sales.

In the fall of 2008, Dem Franchize Boyz released their third and final studio album entitled, Our World, Our Way. Their first record with Koch Records, it was produced by T-Pain, Jermaine Dupri, Maestro, Parlae, Marvelous J, Trabeats, Young Juvie, and Jim Jonsin. Preceded by the single, Talkin’ Out da Side of ya Neck!, the standard edition boasted thirteen dirty south beats, most of which featured artists such as L.T. Moe, JR Get Money, Mannie Fresh, Peanut & Joe Blow, and City Black; some of the numbers included Roll Ya Arms, Make Ya Mad, The Life, Put U On, Come Come, Get Cha Hustle On, and The Killers, The Dealers. In an exclusive version made available on iTunes, Our World, Our Way also came with the bonus tracks, Choosin and It’s a Go which were produced by Parlae and Maestro.

Although not as big of a hit compared to its predecessor, it still managed to chart at number 115 on the US Billboard Top 200; additionally, it also settled at number ten and number nineteen on the Top Rap Albums and the Top R&B and Hip Hop Albums Charts respectively. Still, critical reception toward the album was generally negative- for instance, critics at RapReviews gave it a mediocre 4/10 rating. Nonetheless, Our World, Our Way spawned two singles including Turn Heads, which featured Lloyd in the vocals. 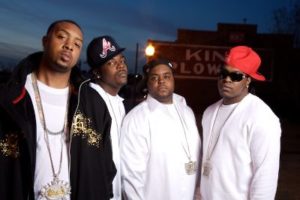 Not long after the release of their third album, it was announced that the hip hop ground would be going on hiatus. From there, it wasn’t until 2010 that they came out with their EP, The Pimpin Chronicles. A year later, they came out with their next album entitled, Voltron. Another hip hop album, it contained thirteen rap beats including the songs Ooh Whop, Coutin Bands, I Bet They Follow, Cloths Off, Tie The Knot, High Speed, and I Rock (should be interested, the EP is available on Spotify).

On December 18, 2012, Dem Franchize Boyz surprised fans by coming out with yet another album entitled, Finesse. Made available online, the explicit hip hop album featured a collection of eleven tracks, some of which included Woozy, Work Pimpin & Yung Nut, Who Got It, I’m a Smoker, If I Was a Super Hero, and In the Rain. Much like their earlier works, it also contained a number of collaboration with artists such as Yung Nut, King, Smoke of Field Mob, and 2Chainz. Upon its release, Finesse was warmly received by fans, many of whom gave it favorable reviews.

The next fall, the hip hop foursome released their next album, Back to Square One. Similar in terms of style compared to their earlier works, it contained twelve hits including Private Places, I Got It, My Own Lane, Like Ime Rich, Gotta Make It Work, Spread My Love Around, and Work Pimpin. Since then, Dem Franchize Boyz have recorded and released another extended play entitled, Pimpin The Conductor, which was released in 2016.

Other than that, it doesn’t look like the hip hop quartet has anything planned for this upcoming year- as far as we can tell anyway. Judging from what’s been posted onto their IMDb page, it would seem that they do not have any television appearances planned either- their last project on the small screen having been in that of the TV special, So So Def All-Star 20th Anniversary Concert in 2013.

If you’d like to stay up to date with the hip hop crew, you can do so by following Dem Franchize Boyz on social media- you can find them Instagram at @DemFranchizeBoyz. Alternatively, you can also visit them on their official Myspace page.