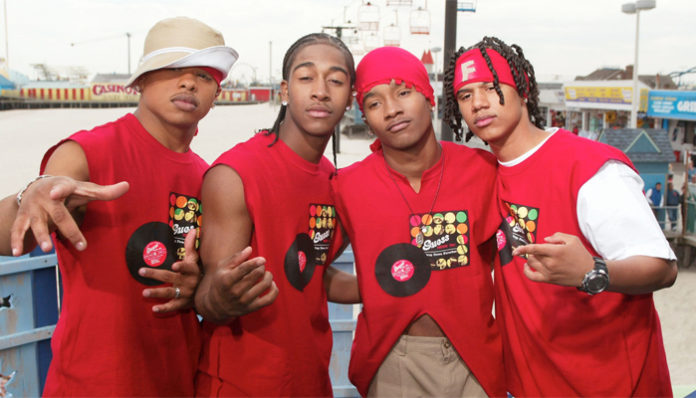 The Los Angeles-based R&B boy band B2K first established themselves in the hip hop scene in the late 90’s. Consisting of four members- Omarion, Raz-B, J-Boog, and Lil’ Fizz, the group came together after they participated in a talent showcase organized by Epic Records in 1998. Having impressed the A&R executives, they soon found themselves ahold of a recording deal, with Chris Stokes working as their manager. Naming themselves B2K, they subsequently made their first major appearance in Lil’ Bow Wow’s music video, Ghetto Girls in 2000; shortly afterward, they also opened for Scream Tour I. Many hours spent at the studio later, they released their first professional single entitled, Uh Huh in 2001. A huge hit, it broke them into the US Pop Charts and served as their debut into the hip hop world. The following spring, B2K came out with their eponymous full length album, B2K– a major success, it ultimately went on to peak at number two on the Billboard Top 200.

Not only did their debut album reach the top of the US charts, but it has since also been certified Gold by the RIAA after selling over 500,000 copies. Later that same year, B2K released their second studio album entitled, Pandemonium! which proved to be an even bigger success compared to their initial effort. A couple of the boy band’s other album releases include the holiday collection, Santa Hooked Me Up (2002), and You Got Served (2003), the latter of which served as the soundtrack to the dance drama film, You Got Served (2003). In terms of other releases, B2K has also released two compilation albums, six music videos, two extended plays, and eleven singles- some of their hottest titles include Bump Bump Bump, Why I Love You, Uh Huh, Girlfriend, Why I Love You, and Gots Ta Be. Throughout their musical career, they’ve also collaborated with other fellow artists such as Lil’ Kim, Fabolous, and P. Diddy.

In addition to their work in hip hop, B2K has also appeared on the screen several times throughout the years. For instance in 2004, they starred in the previously mentioned film, You Got Served; for most members of the boy band, it was their first time appearing in a motion picture. As a group, they’ve also performed at a number of TV special events such as MTV Video Music Awards (2002), Total Requests Live (2002), The 30th Annual American Music Awards (2003), Duets (2003), 40 Most Awesomely Bad Dirrty Songs…Ever (2004), and Diamond Life (2005). Unfortunately for fans, it was announced that the group would be splitting due to internal conflict in the mid 2000’s.

So what has the former B2K members been up to since then? Have they all embarked on solo music careers? What happened to B2K? Where are they now in 2018?

History of B2K and the Formation of the Group 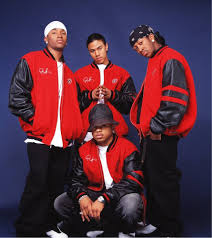 In 1998, the group first came together in Los Angeles for a talent showcase held by Epic Records. Having successfully made an impression on the label’s A&R executives, they soon found themselves ahold of a recording contract. At the time of their formation, the crew consisted of Raz-B (De’Mario Monte Thornton), J-Boog (Jarell Damonte Houston Sr.), and Lil’ Fizz (Dreux Pierre Frederic); it wasn’t until 1999, during a New Year’s Eve Party hosted by their manager Chris Stokes, that Omarion (Omarion Grandberry) joined the group as their fourth member. Naming themselves as B2K- a acronym for Boys of the New Millenium- they later began making their mark in the music scene.  In 2000, the quartet made one of the first major appearances in Lil’ Bow Wow’s music video, Ghetto Girls. Around that same time, they also opened for the highly popular, Scream Tour I.

Later starting to work on their debut record, B2K eventually released their first single entitled, Uh Huh in the summer of 2001. Driven by dance beats, the song quickly proved to be a major hit among the hip hop crowd; not only that, but it also broke into the US music charts later that same year- having peaked at number thirty-seven on the US Billboard Hot 100 and at number twenty on the Hot R&B/Hip Hop Songs Chart. Effectively kicking off their career, it was ultimately followed by the release of their debut studio album, which was made available the following spring.

The Music Releases of B2K Throughout the Years 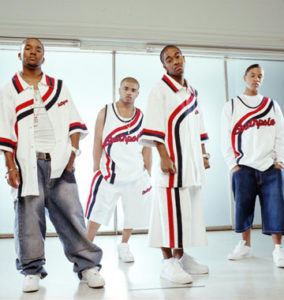 On March 12, 2002, the R&B boy band released their self-titled debut album, B2K under Epic Records, whom they had signed with in the late 90’s. Their first major release, aside from their earlier single, its production was handled by a talented team consisting of Joe N Little III, Bryan-Michael Cox, Jermaine Dupri, Steve Russell, Troy Taylor, and Chris Stokes, among a few others. Consisting mostly of hip hop and pop, the album featured seventeen tracks including the titles Hey Little Lady, Your Girl Chose Me, Feel This Way, Last Boyfriend, Here We Go Again, Why I Love You, I’m Not Finished, and Come On. In total, the album ran for approximately one hour in length.

A successful debut release, B2K entered the US Billboard Top 200 at number two and eventually settled at the top of the R&B and Hip Hop Albums Chart. By the end of its first week in stores, the eponymous album had sold over 109,000 units. Although it garnered mixed reviews from critics such as those writing for Q Magazine and Rolling Stone, it managed to grab the 98th position on the Billboard 200 at the Year-end Chart. Supported by the release of three singles- Uh Huh, Why I Love You, and Gots Ta Be, all of which charted in the United States, the self-titled album has since sold more than 500,000 copies domestically, making it the group’s first RIAA certified album (e.g. Gold).

That same year on October 29, 2002, B2K released their first and only holiday album entitled, Santa Hooked Me Up. Recorded between 2001 and 2002, it contained a mix of Christmas classics as well as original material. Boasting an eleven-song track list, some of the numbers include Jingle Bells, Rain and Snow, Everyone’s Home for Christmas, Santa Baby, My First Christmas, Why’d You Leave Me on Christmas, and Sexy Boy Christmas. A handful of the songs such as Santa Baby, and My First Christmas also featured guest appearances from artists such as Jhene, IMx, and TG4. While it spawned the single Why’d You Leave Me on Christmas, which was accompanied by a music video, critical reception toward the album was unfortunately generally negative.

Just a couple of months later, the R&B boy band came out with their second and final album entitled, Pandemonium!. Their last record with Epic Records, the dance pop album was produced by Bryan-Michael Cox, Jermaine Dupri, R. Kelly, Platinum Status, Troy Taylor, Damon Thomas and Chris Stokes- most of whom the group have worked with before. Significantly longer than their earlier releases, Pandemonium! contained twenty one tracks including Where Did We Go Wrong, The Other Guy, Bump That, Would You Be Here, Back It Up, You Can Get It, Why I Love You, and Pretty Young Thing; it also featured various guest artists such as P. Diddy, Makeba Riddick, Jhene, Romeo, and 50 Cent. 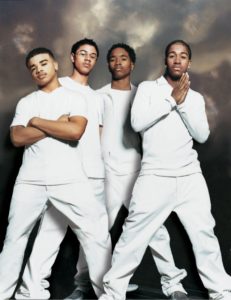 Shortly after being released, Pandemonium! entered the US Billboard Top 200 where it peaked at number ten; it eventually also managed to reach number three on the US Top R&B and Hip Hop Albums Chart. By the end of the initial week, the album had sold over 194,000 copies domestically. Outside of the US, the album was also met with success- it also peaked in a handful of other countries such as Switzerland, France, Australia, and the UK. Their best-selling album to date, it saw the release of four singles- What a Girl Wants, Bump That, Girlfriend, and Bump Bump Bump– the last of which was a chart topper on the Billboard Hot 100. Since it was first released, the album has sold over a million copies across the US, earning it Platinum accreditation from the RIAA.

Although the boys haven’t released any additional studio albums since, they did go on to release You Got Served  in the winter of 2003- which served as the original soundtrack to the drama film of the same name, You Got Served. Released on December 23, 2003, its production was handled by Top Dawg, Marques Houston, Dr Period, J Classic, and Chris Stokes. Distributed by Epic Records, it came with thirteen tracks, most of which featured B2K as the lead vocalists although some numbers featured various other artists; some titles include Fizzo Got Flow, Streets is Callin, Out the Hood, Sprung, Take it to the Floor, and Do That Thing. You Got Served eventually peaked at number thirty four on the Billboard Top 100.

B2K in the You Got Served Film

In January of 2004, the group made their big screen debut in the previously mentioned movie, You Got Served. Directed by their manager Chris Stokes, its plot centered around a team of dancers who participate in a local street dancing competition for a chance to realize their dream of one day opening a recording studio. Aside from the four members of the boy band, who played the main dance crew, the movie also starred Jennifer Freeman, Lil’ Kim, Michael Taliferro, Alani Vasquez, and Chris Jones.

Distributed by Screen Gems, You Got Served was released theatrically on January 30, 2004. Upon hitting the big screens, it entered the US Billboard at number one, having earned over $16 million during its opening weekend. By the end of its run, it had grossed a worldwide total of $48.6 million- over six times that of its production budget of $8 million. Despite its commercial success however, critical reception was generally negative; for instance, it currently holds a 17% rating on Rotten Tomatoes. Nonetheless, many fans of the band were more than excited about its release.

Shortly after the release of the movie, it was announced by their music manager Chris Stokes, that B2K would be disbanding due to internal disagreements within the group. Thus, they have not released any new material since the early to mid 2000’s. 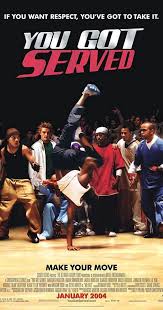 Although you won’t be able to find the group active in any social media platforms (they’ve already disbanded after all), you can revisit their music at their official Youtube Channel at @B2KVEVO. Alternatively, you can follow the former members separately on platforms such as Twitter or Instagram.