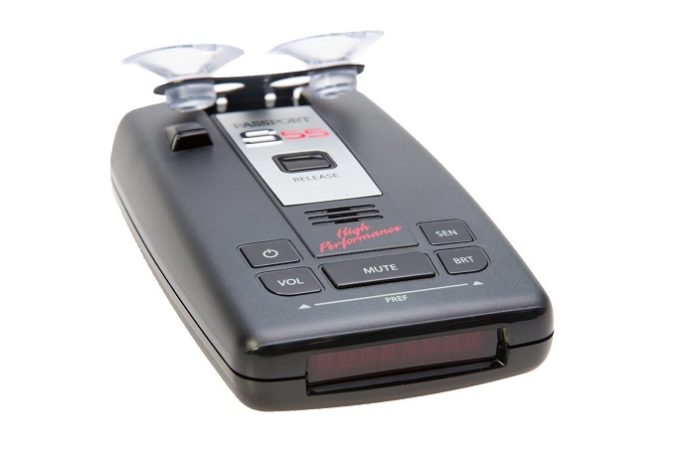 I have raved in the past about the Escort line of Radar detectors, and for good reason. They may occasionally be a little light weight, especially with the cheaper models, but all of them have an excellent ace in the hole, phone integration. It can transform even the cheapest of radar detector into a powerhouse build, allowing you to use combined information sources on the fly. I cannot for the life of me understand why other firms re not doing this, it is making it hard to give wholly positive reviews to the competition, but here we are. The Passport S55 is one of Escort low end builds, though it still stands are around twice the price of the lest expensive model I have reviewed from other companies.

I always use this paragraph to talk about the underlying hardware used in radar detectors. An interesting thing to note is that the tech involved has not changed in a very long time. The V1 has been using the same basic model for more than twenty years. So the build price is very low, what you are paying a premium for is the software, and the Escort range has some of the best software on the market.

So let’s break this one down. Most of the other Escort radar detectors are still being actively updated, but the S55 is something of an abandoned model. The price is one point, and you can still take advantage of the Escort app, but there are a few added difficulties here that we need to address.

This is a bit of a new one for me. All the other Passport models I have got to test are still featured on the Escort site, and while there is a link to the S55 on site, it leads no where. I think it might be due to the similarity to the X70, they are essentially the same build with a few features removed. It also means that you can get this model dirt cheap right now if you are willing to forego access to the Escort warranty. The S55 comes with all the standard features of the Escort line, good hardware and frankly astounding software. So let’s jump in.

The look of the build is far from important, but it needs to be brought up. The S55 is far from an attractive build. It looks like a clock radio, far more so than any other build I have seen. Deliver me from 1983. If you can get beyond the downright fugly exterior, the feel of the build is impressive. A nice heft, and a strong plastic outer casing. It falls down a little in the mounting bracket department, but you can buy a better one from escort if you feel the need. The standard Escort mounting bracket uses magnets and sticky suction cups for perfect stability, here it is simple a click in system with regular suction cups. Far from ideal. The display reinforces the clock radio aesthetic, with it being a simple red LED style. At least it’s clear, even if I dislike having to look at it.

Many overlook the warning sound, but I feel it needs to be brought up. You are going to hear the warning every so often, and it is nice to know that it doesn’t sound exactly like a cat being used as a bow for an off key rendition of Bach. It doesn’t, but it’s a fairly close comparison to be honest. Thankfully you can turn it down. The mute button is on the box, but there is the smart cable, which comes with a few buttons for on the fly changes, far safer than any other model on the market, that requires you to lean forward to the windshield in order to mute or program on the go.

Now we come to the piece de resistance, the app that comes with all Escort models. back when the S55 was being actively supported you gained access to the app for free. Not the case anymore, you will have to buy it separately, and it’s not as cheap as I would like. A month will cost you $5, while the year will set you back $50. When we factor in what you would be spending on the build itself the total price is still sub $200, which is amazing, but you have to be aware of the added expenses.

The LIDAR, laser detection system, works. there really isn’t anything else to say about it. Laser detection is far from amazing no matter what you buy. LIDAR is a point to point system, so if you are hit with it you speed is known before the box can warn you you’re hit. You might get lucky and pick up the dispersion for a vehicle up ahead that gets hit, and adjust accordingly, but that is far to circumstantial for my liking. Better to look into LIDAR jammers instead, they are still legal at the time of writing. Remember that a Radar jammer is illegal no matter where you are.

Now we have to talk about the missing features. The X70 has the edge in terms of aesthetics, and it comes with a USB port. You can update it with you laptop. The same cannot be said for the S55. It also lacks an audio port, so you cannot use it with a motorcycle helmet.

Overall there is a lot to like here. It feels like the best of both worlds. you get the price point of the other firms with all the features of an Escort build. Now, you miss out on a few freebies, but that only affects you very long term.

Hey folks, remember to check up the legality of radar detectors in your own area before buying. I have done my best here, but I might have missed something. First, if you are an international reader it is probably illegal to own a radar detector in your country. In the US you are covered by the 1935 Communications Act for use in non-commercial vehicles in all states besides Virginia and DC. You are also not allowed to use them in and around US Military bases. You cannot use them in commercial vehicles anywhere either. There are restrictions in California and Minnesota on what can and cannot be placed on your windshield, obstruction of vision laws, so be careful there too. Finally, remember to run it off when crossing the Northern border, they are illegal in Canada. I mentioned that Radar jammers of any kind are illegal everywhere, but LIDAR detectors are not, and they are way more useful than laser detectors.

Now we come to the price, and unlike every other Escort build I have reviewed, this one is excellently priced. It might actually be my favorite on the market as a result. You can expect to find the S55 for around $150-160. That said you can usually find some deals at Amazon.com by clicking here. The next model up from the firm is closer to $300, so here you end up with all the bonus features of an Escort build, at a price point everyone can afford. It would be even easier to recommend if the warranty was valid, and if it had a USB port. But hey, you can’t get it all, even if this comes damn close.

Now the warranty, or the lack of one. So far as I can tell you are only entitled to the Escort warranty if you buy from them or a licensed third party re seller. Seen as the S55 is not available on their site, and I was unable to find said third party re seller, we are left assuming a lack of warranty. Not a terrible thing, but the lack of manufacturer’s safety net is troubling. you also miss out on the performance guarantee, which has Escort paying for you first speeding ticket after purchase. Be sure to keep the receipt from whomever you buy it from, you still have some rights as a consumer no matter who you go with.

That price is amazing. The lack of warranty is a concern for some, but if you intended to go second hand regardless, then this won’t be a concern for you. Overall this is excellent, and well worth the price of admission.

I cannot recommend this build enough. It comes with all the core features that you look for, all the bonus features of an Escort build, and the price of a Cobra build. There is literally nothing else on the market  that can match this as an entry level model. The fact that you can’t update the software is an issue, but it is lessened by access to the Escort app. If it had a warranty it would be the best, as it stands,it is the model I advise anyone new to the market to check out, and seriously consider.

To see all the discounts currently available on the S55 at Amazon.com click here.